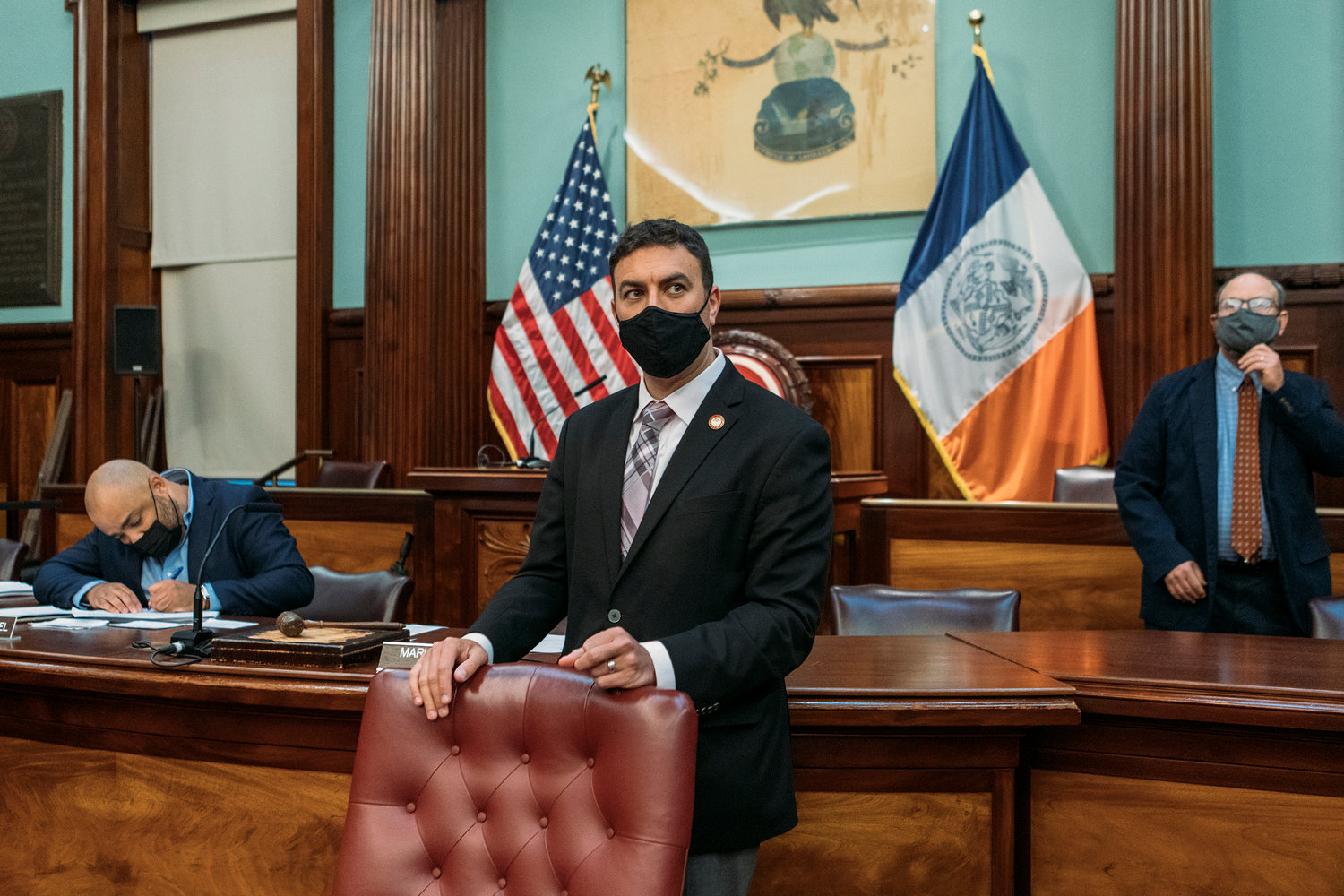 After about eight months on the city council, Eric Dinowitz passed his first bill he authored this past month. That legislation aims to amend the definition of the term ‘veteran’ in the city charter to include those with less-than-honorable discharges, so they can also receive veterans services from the city.
Courtesy of New York City Council/ Emil Cohen
By ETHAN STARK-MILLER

If there’s any rite of passage for a city council member, it’s likely seeing a piece of legislation they drafted actually become law.

If that’s the case, then Councilman Eric Dinowitz is close to truly maturing professionally at City Hall, potentially opening a door for a number of veterans in New York City who often get overlooked.

Intro 2354-B passed the council unanimously — with both councilmen Fernando Cabrera and Bill Perkins absent — in December, included among dozens of other bills that had piled up on then-Speaker Corey Johnson’s desk in recent years. The bill aims to tackle a problem Dinowitz learned about during his eight months or so in office — veterans with less-than-honorable discharges can’t access federal and city services the same way those with honorable discharges can.

“Most service members are discharged with an honorable discharge status,” Dinowitz said. “Beyond the dignity that provides them, it also entitles them to federal benefits that you get from joining the Army, such as education benefits, housing subsidies — things of that nature.”

There’s a stigma around service members who didn’t receive honorable discharges, with many automatically assuming they must have done something wrong while they wore a uniform. But there are a variety of reasons why veterans weren’t discharged appropriately, Dinowitz said — many under rules and laws that have since changed.

“During ‘Don’t Ask, Don’t Tell,’ 13,000 people were discharged because of their LGBTQ status,” the councilman said. “People have been discharged (with an) other-than-honorable status because of pregnancy. Or their skin color. Or from behavior arising from mental health.”

Because of that, Dinowitz’s bill aims to amend the definition of “veteran” in the city charter to include those with less-than-honorable discharges.

“We in the city changed the definition to ensure that all veterans — regardless of their discharge status — receive city services,” Dinowitz said. They should be “recognized as veterans who served with distinction.”

Although “honorable” and “dishonorable” are the two most commonly known discharge statuses, there are several others that could be given for various reasons. For instance, an “other-than-honorable” discharge isn’t as severe as a dishonorable discharge because it doesn’t require a court martial. This can be handed out for military “misconduct,” like revealing one’s LGBT status when “Don’t Ask, Don’t Tell” — the policy instituted during the Clinton administration intended to be a first step toward including those of different sexual orientations into the military — was still in effect. At the time, the military could no longer ask soldiers if they were gay, but those same soldiers couldn’t come out, either.

The bill also is expected to broaden the definition of “veteran” to include active service members and those who’ve served in the U.S. Public Health Service, or as a member of the National Oceanic and Atmospheric Administration. The bill also intends to increase the size of the city’s Veterans Advisory Board from 11 to 13 members, with the two additional spots reserved for family members of veterans.

“Every single time I open one of my committee meetings or address veterans, I not only thank the veterans, but I also thank their families,” Dinowitz said. “Veterans obviously have made countless sacrifices for our country. But their families have also made sacrifices. It’s important to recognize them, and this bill will move forward in ensuring that family members’ voices are heard on the Veterans Advisory Board.”

It was Mayor Bill de Blasio’s office that first brought this issue to the attention of the veterans committee, which Dinowitz chairs. A number of veterans weren’t eligible for a variety of services, including continuing education, job assistance, and finding adequate housing. There is even a program to help veterans with less-than-honorable discharge statuses to connect with nonprofits and lawyers who might help them appeal to upgrade their statuses.

Sergio Villaverde, chair of Community Board 8’s Special Committee on Veterans Affairs, said this bill will clearly address some inequities in who is entitled to veterans services — including those punished under “Don’t Ask, Don’t Tell.”

“There are a lot of places where there’s some shortcomings for veterans or people who’ve left the military under other-than-honorable circumstances,” Villaverde said. “The military did formerly have an anti-gay and lesbian stance that was actually part of the Uniform Code of Military Justice that people were put out for. And if not put out directly, (they were) unfairly put out indirectly. Pressured out. So, there are a lot of situations where we should look at it.”

Yet as someone who’s served in the Coast Guard Reserve for more than three decades — and whose son is currently in the military — Villaverde is skeptical Dinowitz’s bill will treat all discharge statuses the same.

“I think that there is a difference between an honorable discharge and a dishonorable discharge,” Villaverde said. “I don’t hold with the fact that they’re exactly the same. So, I agree with a lot of the spirit of the bill. But I get off the train before saying that all discharges are the same.”

Once the bill passed the council, it went to the desk of then-Mayor Bill de Blasio, who didn’t sign it. The new mayor, Eric Adams, has until Jan. 8 to sign or veto the bill, or it automatically becomes law.

A Dinowitz spokesman told The Riverdale Press Adams hasn’t indicated he plans to veto any bills from the December city council meetings.

Overall, Dinowitz described his experience in passing his first piece of legislation as humbling.

“The voters sent me here to ensure their voices were heard, and to make sure that we have an equitable and just recovery,” Dinowitz said. “We have veterans in our city who need support. And this bill moves them a step forward in getting the support that they earned through their service.”