Dinowitz sworn in, but challengers ready

Lora kicks off primary campaign with some big-time political heavyweights 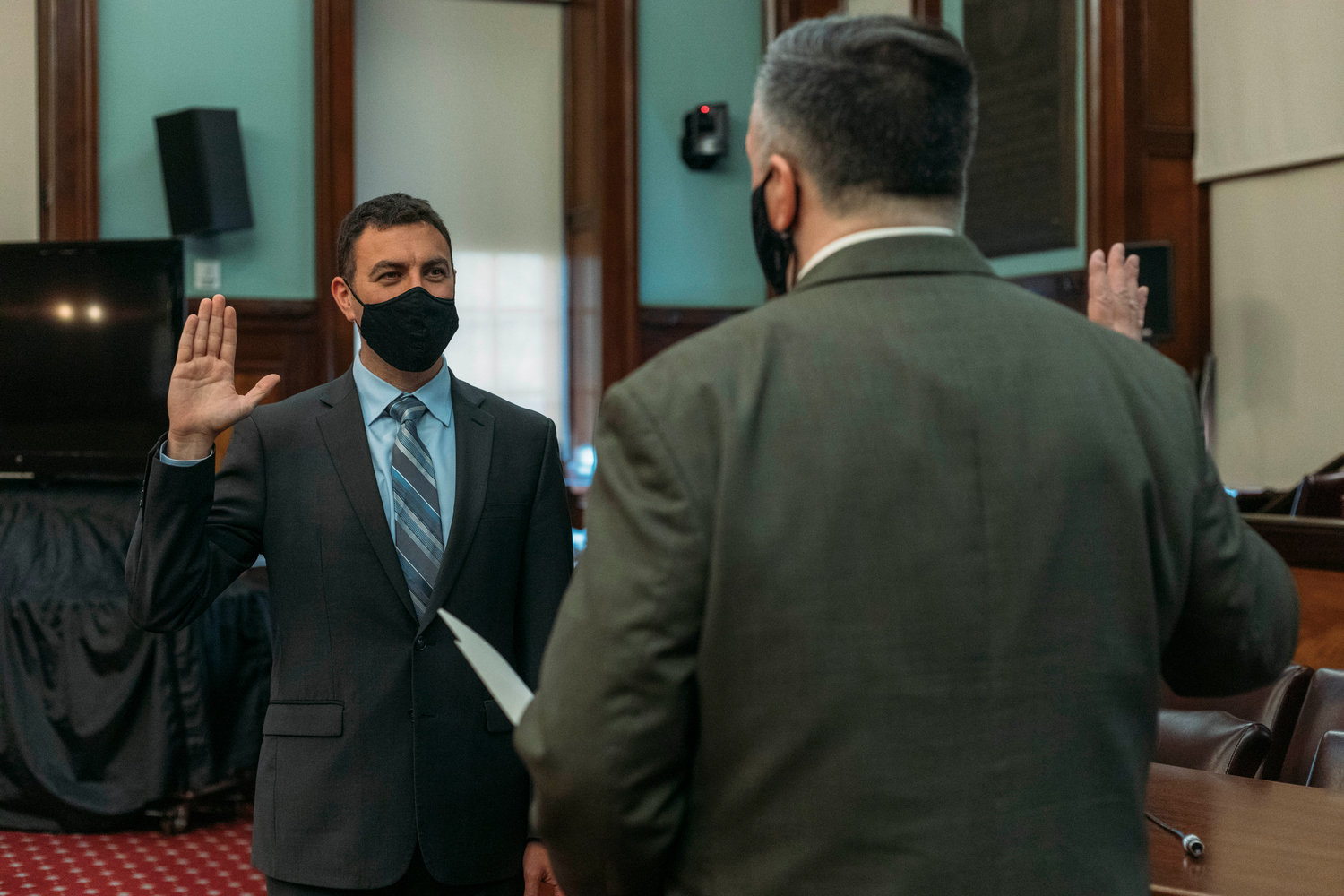 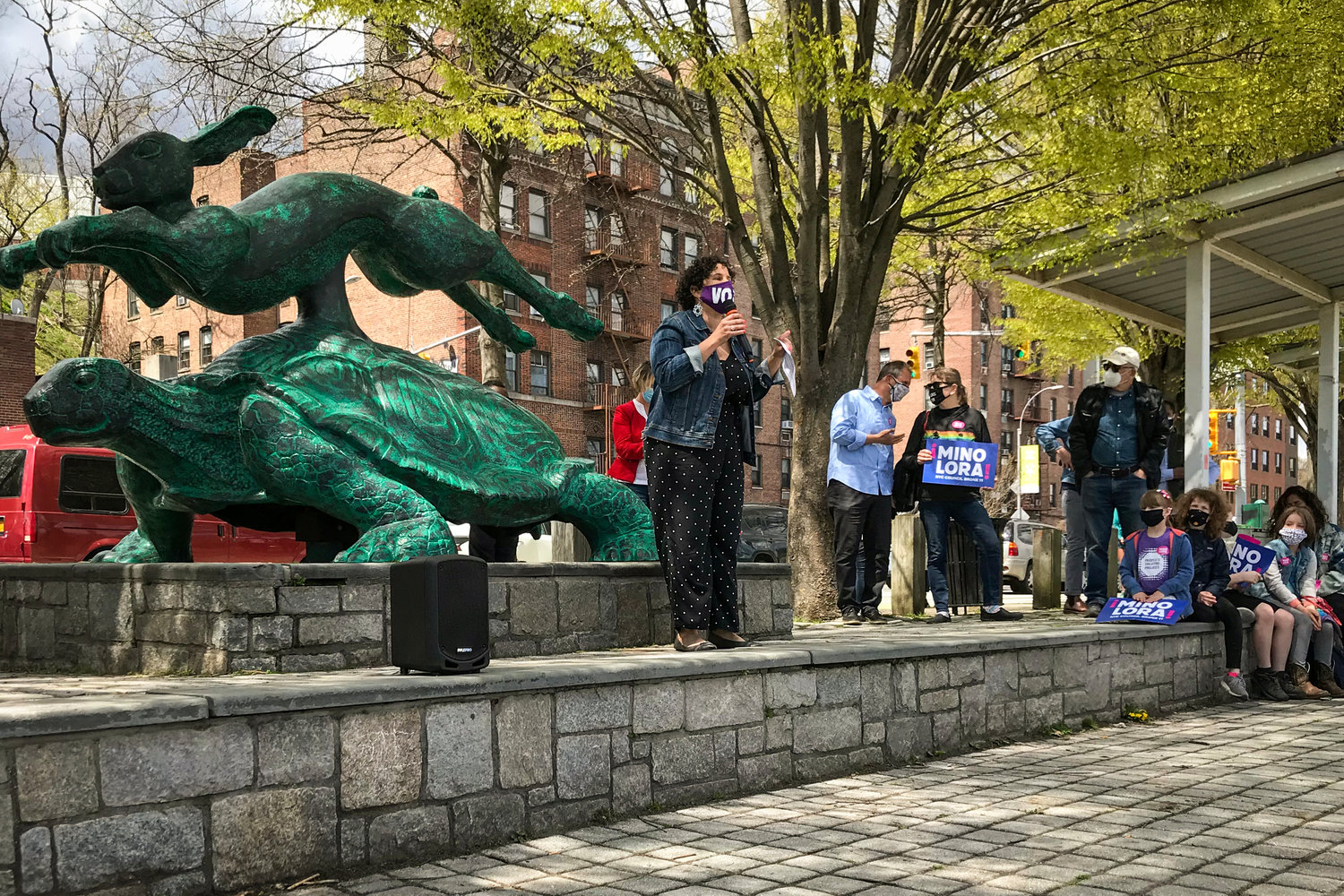 Speaking in front of the tortoise and hare statue at Van Cortlandt Park, Mino Lora rallies her supporters Sunday, officially kicking off her primary run to unseat Eric Dinowitz on the city council. She finished a distant second behind Dinowitz in the March 23 primary, but hopes to reverse that in the June 22 primary.
MICHAEL HINMAN 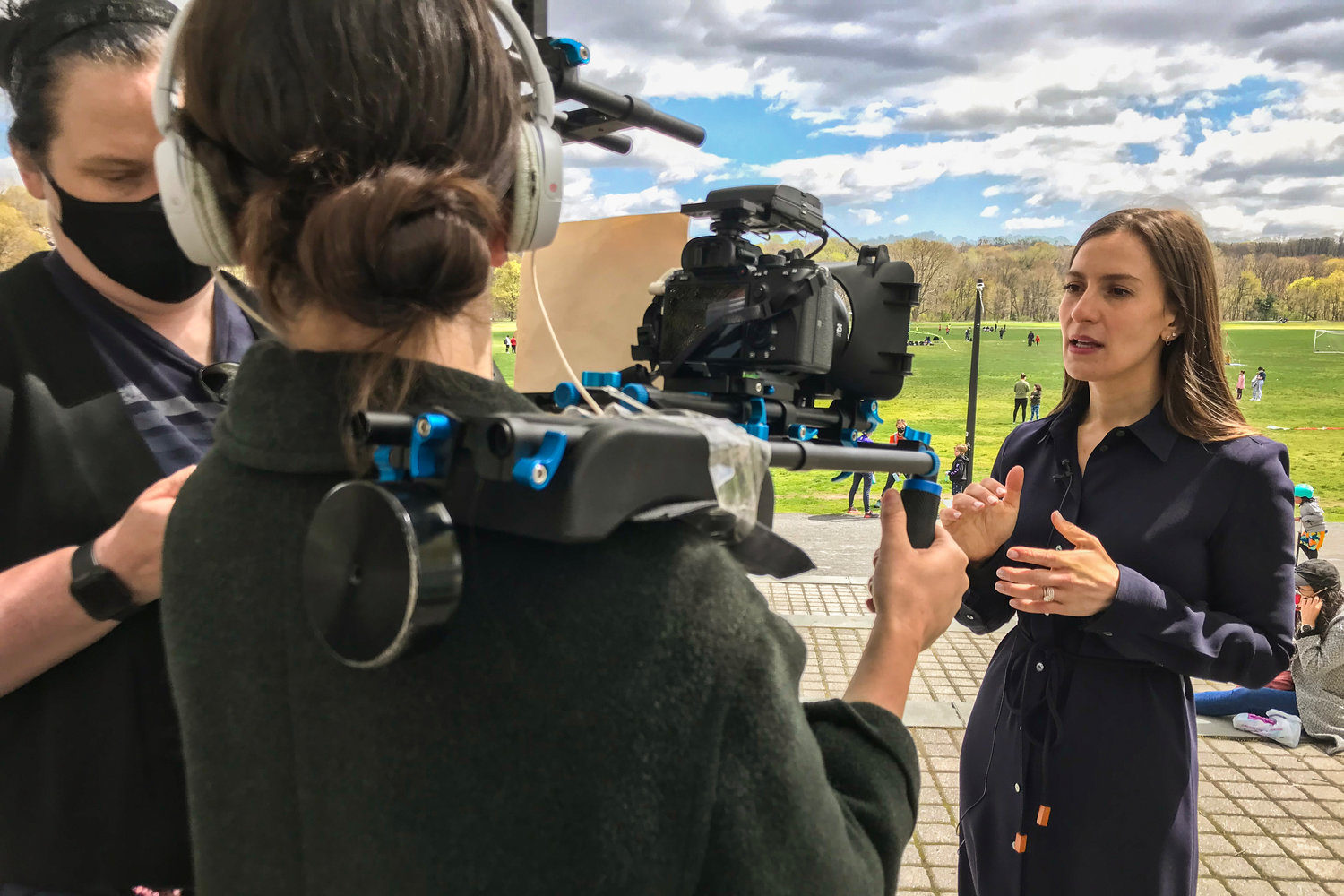 State Sen. Alessandra Biaggi talks about the importance of voting to the cameras ahead of a rally Sunday at Van Cortlandt Park backing the city council primary campaign of Mino Lora.
MICHAEL HINMAN
Previous Next
By MICHAEL HINMAN

The council chambers at City Hall were mostly empty when Eric Dinowitz and his immediate family were ushered inside on April 14.

Standing with him were his wife Tamar, and his parents — Assemblyman Jeffrey Dinowitz and Sylvia Gottlieb — as the former school teacher was sworn in to replace Andrew Cohen on the city council, promising to not only uphold the laws of the land, but to “faithfully discharge” the duties to which he had been elected.

The ceremony came nearly three years after he jumped into the council race just days behind real estate attorney Dan Padernacht. But Dinowitz can’t breathe easy just yet. For the moment, he’s the placeholder representing this part of the Bronx — a job guaranteed to him only until the end of this year. Whether he remains on the job by the time the ball drops in Times Square depends on what happens on June 22.

That’s when the Democrats will choose who will represent them on the November ballot. Dinowitz is a shoo-in, both as the incumbent and with the backing of the Bronx Democratic political machine. But there was one woman who gave him a good run for his money in the March 23 special election. And on Sunday, that woman wanted to make one thing clear: She plans to become Councilwoman Mino Lora on Jan. 1.

Gathering nearly 100 of her closest supporters at Van Cortlandt Park on the chilly spring afternoon, Lora made her primary run official with the help of some political heavyweights like state Sens. Alessandra Biaggi and Gustavo Rivera, Brooklyn councilman and city comptroller candidate Brad Lander, and political activist and former gubernatorial candidate Zephyr Teachout.

“The Bronx has a really exciting opportunity — it is an opportunity to bring an extraordinary, creative, loving, big-hearted Mino Lora to replace the old boys club and legacies,” Teachout told the crowd Sunday. “You see Mino taking on a legacy and an effort to get Dinowitz into office without having to directly engage with the voters and win on the merits.”

Dinowitz, who chairs Community Board 8’s aging committee, was limited — like everyone else campaigning in the special election — because of the coronavirus pandemic. He championed a number of causes originally supported by his state lawmaker father as well as a few of his own, but couldn’t escape shouts of nepotism, and the benefits he picked up running under the “Dinowitz” brand.

Teachout, however, blamed this Dinowitz club of backing the wrong horse too many times. Last year by supporting Eliot Engel over Jamaal Bowman in the congressional race, and nearly three years ago standing firmly behind state Sen. Jeffrey Klein after Biaggi mounted what seemed at first like a suicide run against a firmly entrenched politician who led the Independent Democratic Conference — a group of breakaway Democrats who backed a Republican leadership in Albany.

“You still have the boys club supporting Jeff Klein, supporting the IDC, supporting these backroom deals right here in this district,” Teachout said. “And it’s time to get that gone, to finish the job with Mino.”

Lora has quite the uphill battle, however. It’s not just the Dinowitz name and running against someone who is now the incumbent, but also to draw out fresh new voters herself. The special election drew fewer than 10 percent of eligible voters. And the last time this council seat was contested during a primary, only 20 percent of Democrats showed up to select Cohen over environmental activist Cliff Stanton in 2013.

According to some election maps, Lora fared far better in the Spanish-speaking portions of the council district — which stretches into Norwood and Woodlawn on the other side of Van Cortlandt Park and the Jerome Park Reservoir — and would likely have to work even harder to ensure those voters get to the polls this summer.

And Lora isn’t even the only candidate running against Dinowitz in the primary. Padernacht is still running despite his fourth-place finish in the special election, as is retired New York Police Department detective Carlton Berkley, who finished last in a six-candidate field on March 23.

Joining them are Riverdale social worker Abigail Martin and a Democratic male district leader out of Norwood, Marcos Sierra. Both sat out the special election, which gives Martin a significant head start in fundraising after the special election candidates shelled out nearly $750,000 in the race ultimately won by Dinowitz.

Yet, it’s a race Lora is ready to take on at full speed.

“One of the things that is essential for me is that when we win — when we win, let’s manifest that — we will work together,” Lora said. “We will co-govern with tenants, with students, with workers, with immigrants, with women, with unions. All of us will work together with seniors deciding what is the legislation we need? What are the budget priorities that we need, that will make our city a city that is a place for all of us, and our Bronx a place where all of us can live with dignity, with love, with justice, and with all the same opportunities.”

Candidates like Lora and Dinowitz are already raising funds for the primary, hoping to get an eight-times matching grant for any money pulled in from New York City-based donors. But Lora already proved in the special election that the most money doesn’t mean the most votes — her nearly $31,000 raised was the lowest among the major candidates, and only Padernacht spent less than she did.

How all of that will translate into the primary race has yet to be seen. But Lora expects a significant boost from sitting lawmakers like Biaggi, who herself comes from a political family.

“And that is what Mino Lora is going to do when she wins the primary in June.”