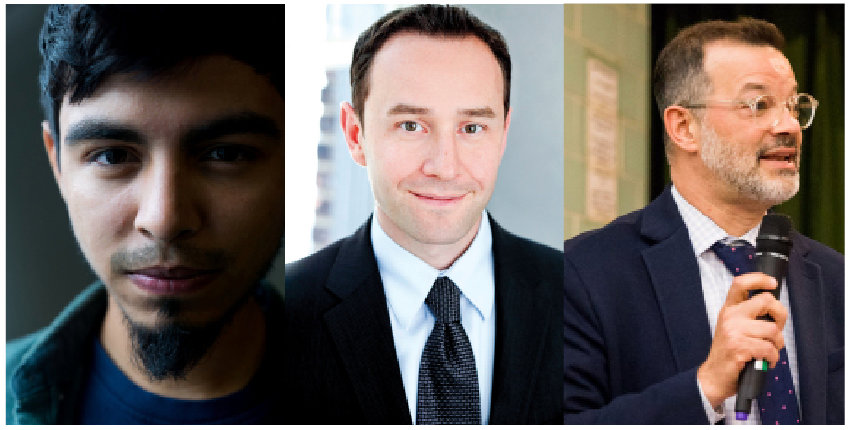 Dionel Then, left, has endorsed Daniel Padernacht in his race to replace Councilman Andrew Cohen, right.
By MICHAEL HINMAN

Dionel Then’s time as a city council candidate has ended with a pledge to donate his campaign war chest to charity, and give his endorsement to Dan Padernacht.

“With New York City and the nation as a whole radically transformed over the last seven months, the priorities and level of experience needed to keep our communities safe and prosperous have become not only self evident, but also the No. 1 priority for myself and my campaign,” Then said, in a statement to The Riverdale Press.

“With humble self-awareness of the limitations I currently have available to me, I am bowing out of the city council race and will endorse Daniel Padernacht’s campaign for District 11’s city council seat set to undergo a special election in early 2021.”

Padernacht, a Kingsbridge Heights real estate attorney and current chair of Community Board 8’s traffic and transportation committee, was the first to enter the race to succeed Andrew Cohen — in 2018. He was quickly joined by Eric Dinowitz, a schoolteacher who is son of Assemblyman Jeffrey Dinowitz, and later by Then, Jessica Haller, and most recently, Abigail Martin and Marcos Sierra.

Of those who have reported fundraising, Then was at the back of the pack with $1,320, behind Padernacht, who has raised more than $35,200, according to the city campaign finance board. Dinowitz has outraised everyone with $73,550, with Haller following with more than $55,800.

Padernacht told The Press he was honored that Then decided to endorse him, and says he knows all too well what it’s like to withdraw from a race — something he did in 2010 for a state senate seat, eventually allowing Gustavo Rivera to take office.

“It means a lot that Dionel has chosen to support me in this race,” Padernacht said, in a statement. “We have spoken about issues and our roots in the district, including similar family backgrounds. Dionel thinks through issues and gives genuine and thoughtful answers about how he feels on a topic.”

Ahead of the pandemic, Then was a docent with a city museum, and had previously served several internships, including one here at The Press.

With Cohen’s nomination to the Bronx supreme court bench in August, this race will likely be decided by a special election sometime in March. Cohen has said he will remain in his council seat until the end of the year, although he has told The Press he can’t share opinions related to his role as a councilman because of what he says are ethical and legal restrictions on judicial candidates.