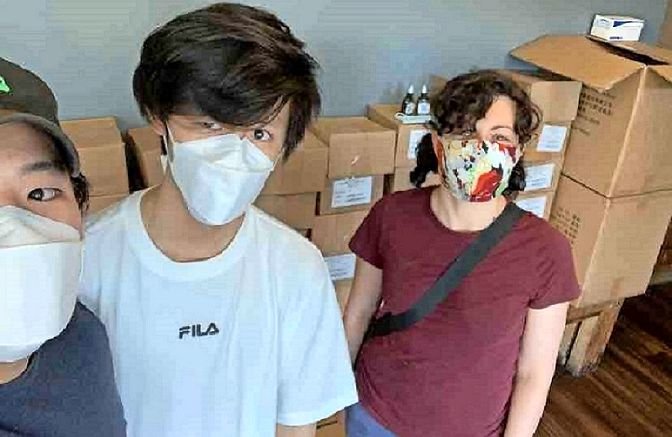 Music is as omnipresent as the greenery, especially in this section of the Bronx. Chamber musicians in Spuyten Duyvil. Jazz composers by the Henry Hudson Parkway. Folk singers at An Beal Bocht Cafe.

Since March, it may have seemed like the neighborhood went silent as the city’s hospitals became battlegrounds in the wake of the coronavirus pandemic. In truth, a group of high school students calling themselves Flume have helped in their own way — through the power of music.

Henri Yoon and father Kevin managed to send 100,000 protective masks to the Montefiore Health System last April. At the time, Yoon was a sophomore at Riverdale Country School. His father, however, is chief executive of global operations at sportswear company Fila, a company that quickly converted its China-based factories from clothing to manufacturing protective gear for essential workers the world over.

And yet, Yoon yearned to do even more.

“We wanted to extend that, Flume and I,” Yoon said. “We’re high schoolers, but we created Flume with the community in mind, to make classical music more accessible. Now we’re using it to help the community in a far more direct way, in a way we didn’t expect. And it isn’t just me, this is a collaborative effort. Without us performing music together, we wouldn’t be able to help in the same way.”

Yoon started the student ensemble with fellow cellist Leo Chang. Sure, they were focused on the classics, but that didn’t mean audiences wouldn’t hear the occasional pop cultural piece, such as the “Mission: Impossible” theme, “A Whole New World,” from the “Aladdin” movie soundtrack, and others.

A humble ethos for a group who went on to do a lot more.

“When the pandemic hit and then the lockdown started, there was a lot of spit-balling for what we could do,” Yoon said. “Leo and his sister Emily, who’s also in Flume, have been in Japan for the past three months. So we’ve had to coordinate with that as well. But at the start of May, we had the idea to start a GoFundMe campaign, and pledge to give the money to Part of the Solution.”

The online crowdfunding could quickly get the word out about those going hungry during the pandemic, encouraging those wanting to help to open their wallets — to the tune of $16,000.

On May 6, Flume posted a classical cover of Celine Dion’s famous “Titanic” song “My Heart Will Go On” to their YouTube video channel, sharing it with the hashtag “Back the Bronx,” garnering just under 900 views.

“We saw that Queens, Manhattan and Brooklyn were getting a ton of coverage and aid, even though the situation in the Bronx was no better than anywhere else,” Yoon said about food and other supplies at the height of the pandemic in New York. “We wanted to further a sense of a community by showing that we are able to help each other out in times of need.”

Few would agree more than Christina Hanson, POTS’ executive director, who considered Flume’s contribution to be of the utmost finest in the fight against hunger.

“We have a longstanding relationship with the Riverdale Country School,” Hanson said. “Henri reached out wanting to donate some masks, and provided 2,500 back in April. It was at a time when masks were next to unavailable.”

Shortly after, Flume posted their first video and fundraiser. In a matter of weeks, on top of the thousands of dollars raised, 2,000 new masks were delivered along with an equal number of hand sanitizer containers. Those masks have since been provided to numerous low-income families who needed protective equipment.

“The need to purchase PPE is a challenge,” Hanson said. “Having Henri’s and Flume’s help is so important right now.”

Flume hopes to continue providing for the borough they call home in a variety of ways in the future, be it virtual concerts or interactive pieces online. But no matter how, Yoon’s hope to help others is a deep-rooted ethos.

“I used to go to church,” Yoon said. “And the pastor said, ‘It’s your job to help people.’ That resonated with me. It comes from a religious context, but I think that if more people thought they were supposed to help others, I think they would do it more often.”