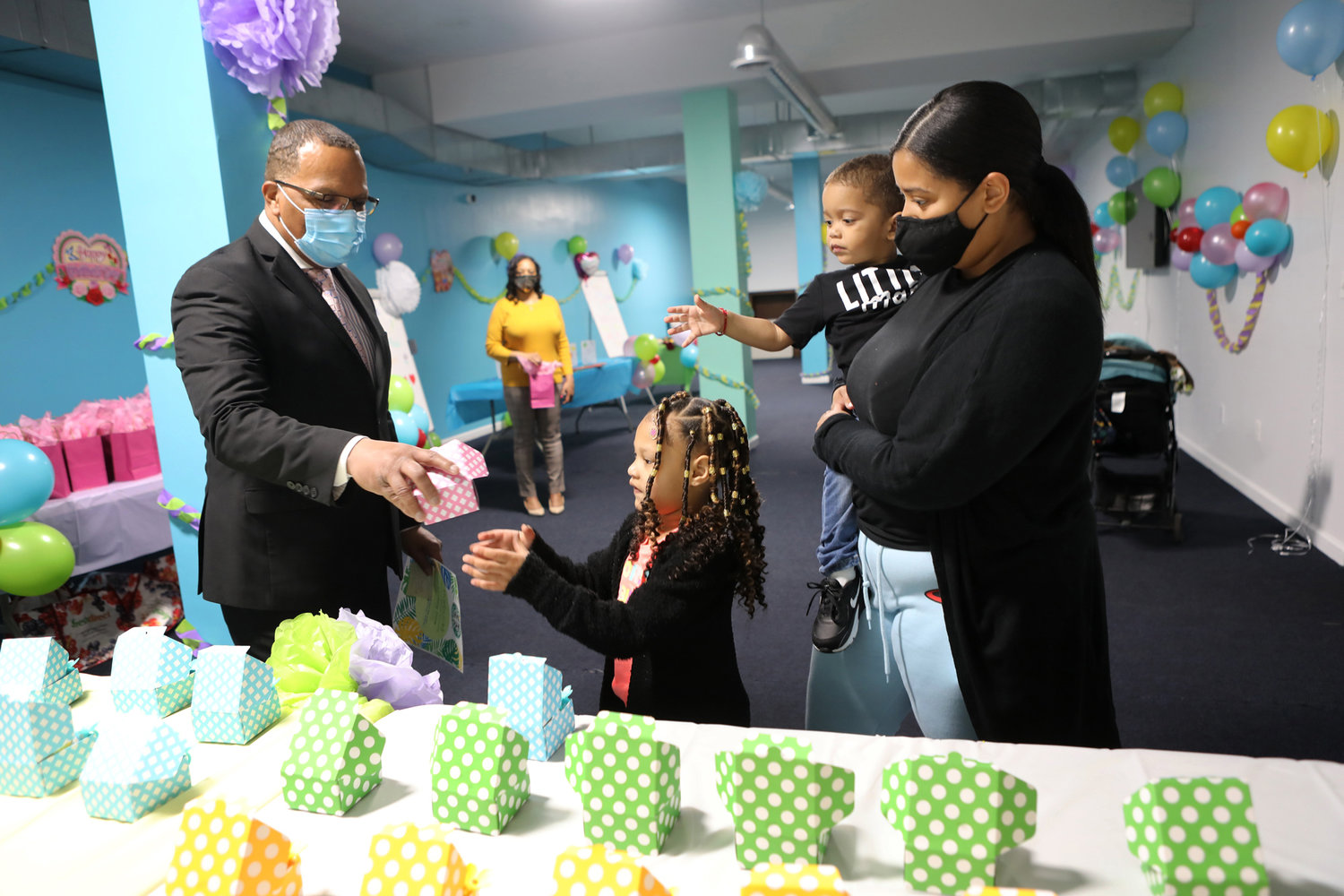 Andre Coleman, the program director at the Broadway Family Plaza transitional housing facility gives a cupcake to Karla’s children, McKenzly and McKayson, during a Mother’s Day event last week. The event was part of a produce drive organized by Kingsbridge Unidos, a mutual aid group ensuring families get fresh vegetables in this part of the Bronx.
CHRISTINA SANTUCCI 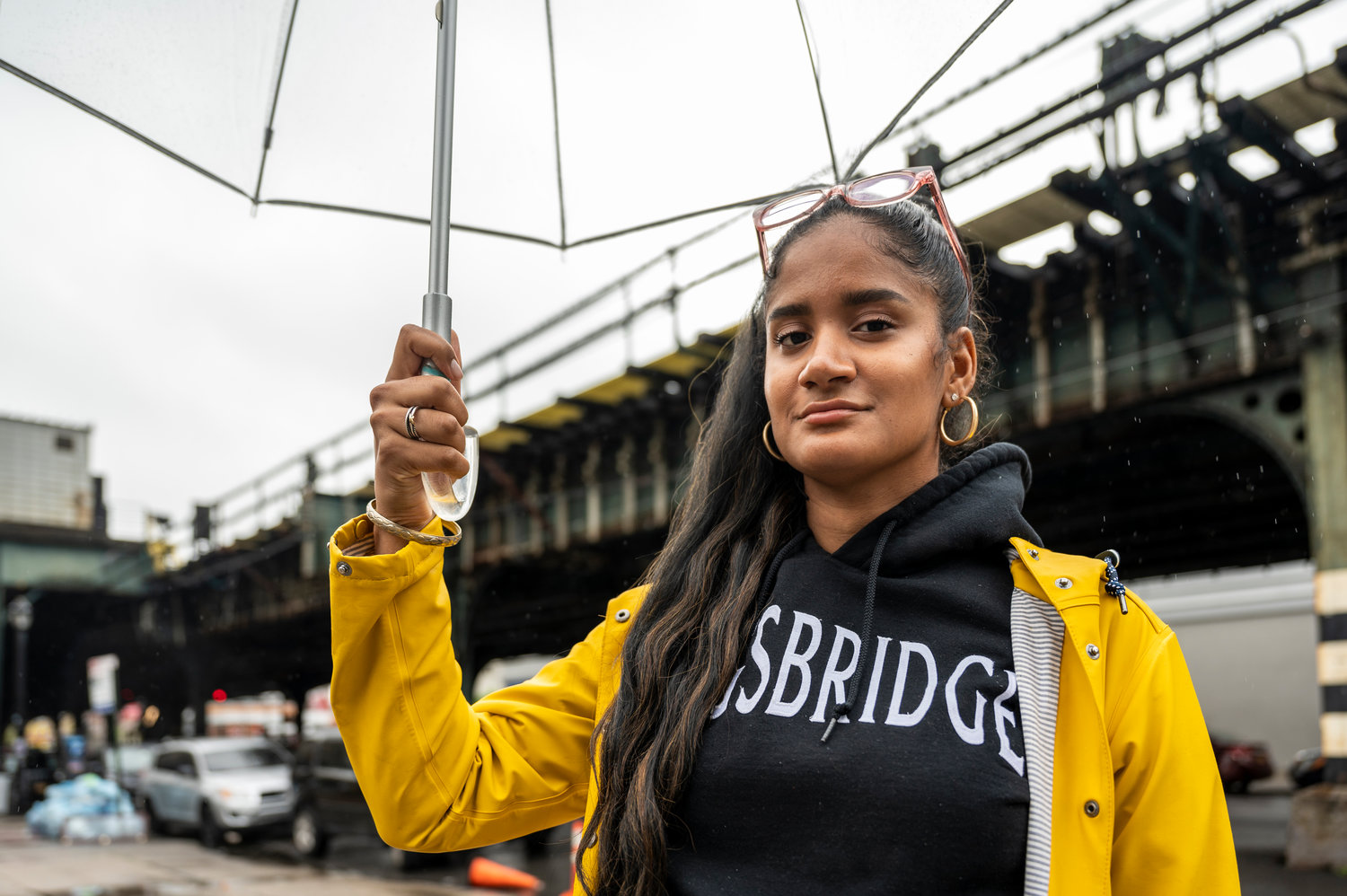 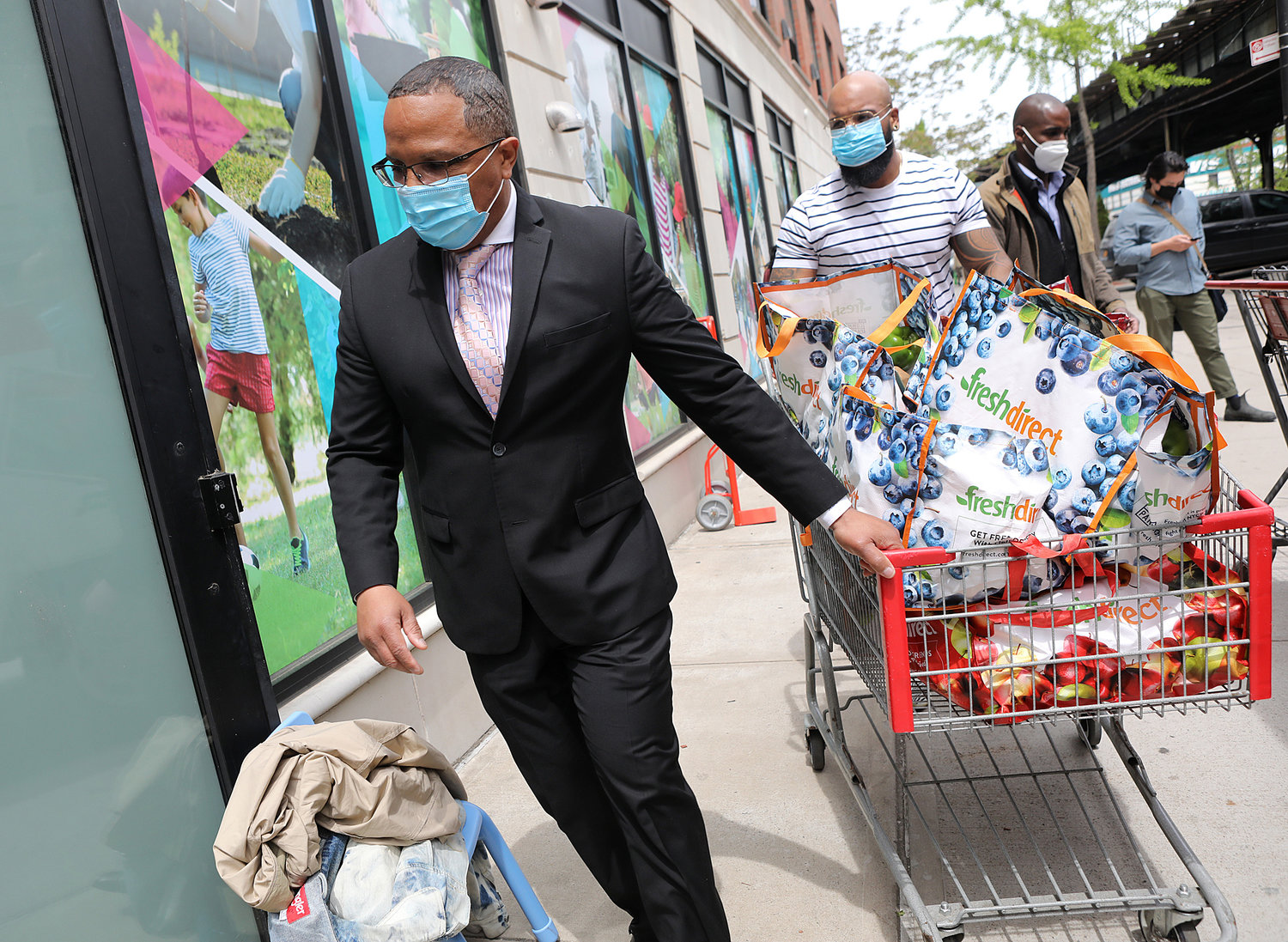 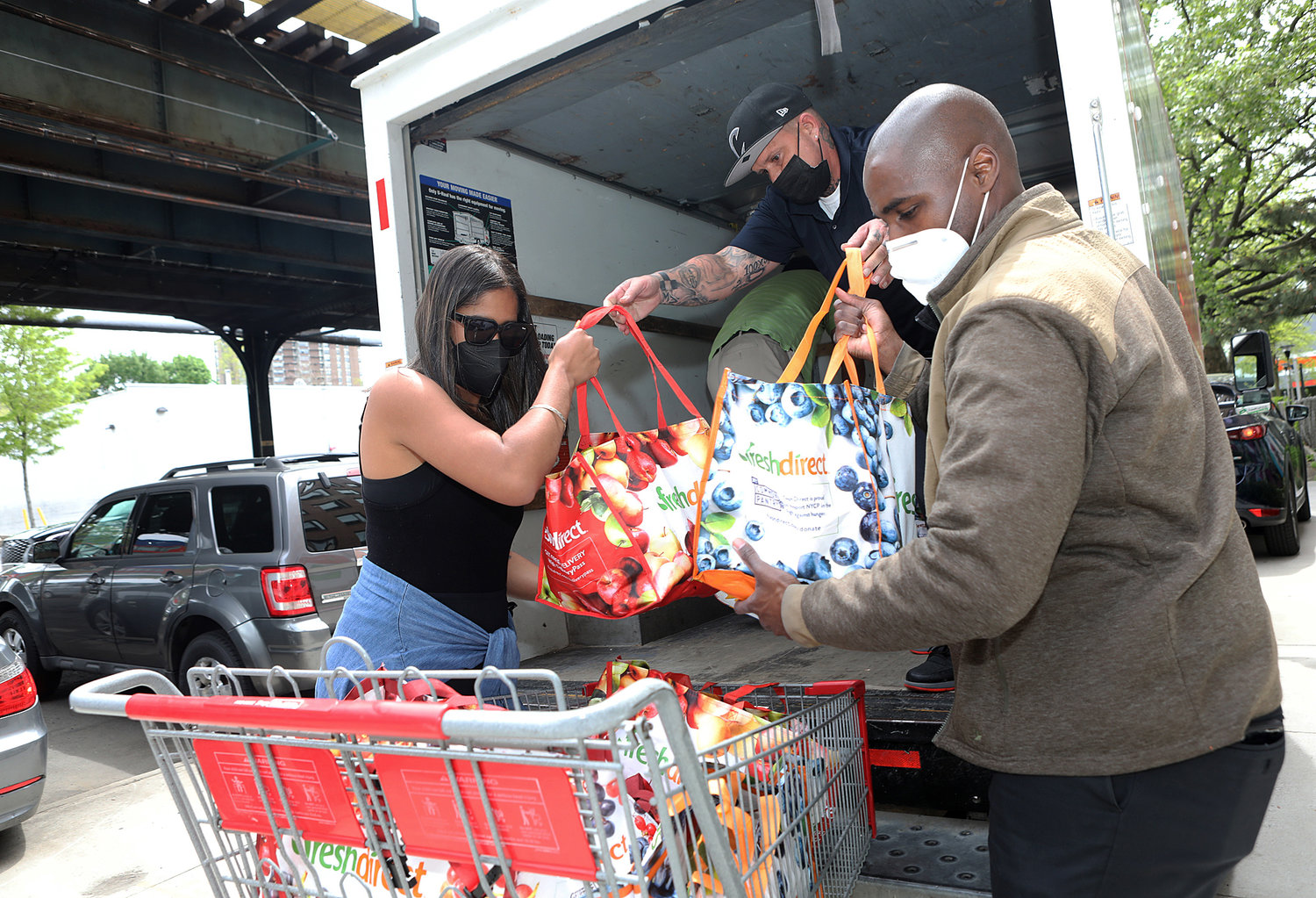 Activist Jessica Woolford started Kingsbridge Unidos as a way to get produce to those who need it during the coronavirus pandemic. For her latest drive, Woolford delivered bags of produce to mothers at the Broadway Family Plaza transitional housing facility for Mother’s Day.
CHRISTINA SANTUCCI 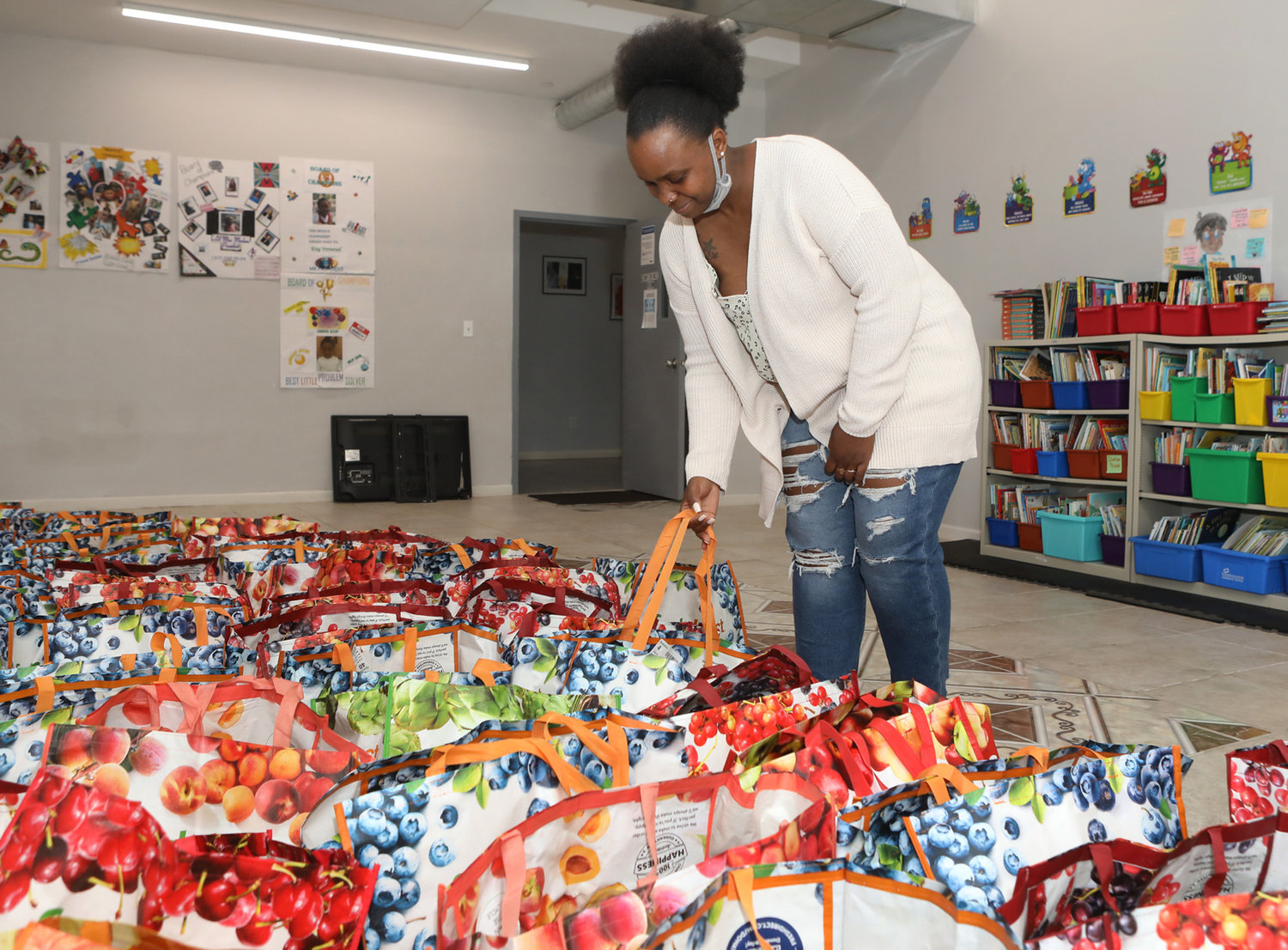 Aleasa Jackson, who just moved out of Broadway Family Plaza’s transitional housing facility and into her own apartment in Manhattan, picks up a bag of vegetables from the Hunts Point Produce Market during a Mother’s Day celebration hosted by Kingsbridge Unidos last week. Jackson — a mother of three — says she really appreciated her time at the shelter because of programs like these that kept her children fed.
CHRISTINA SANTUCCI 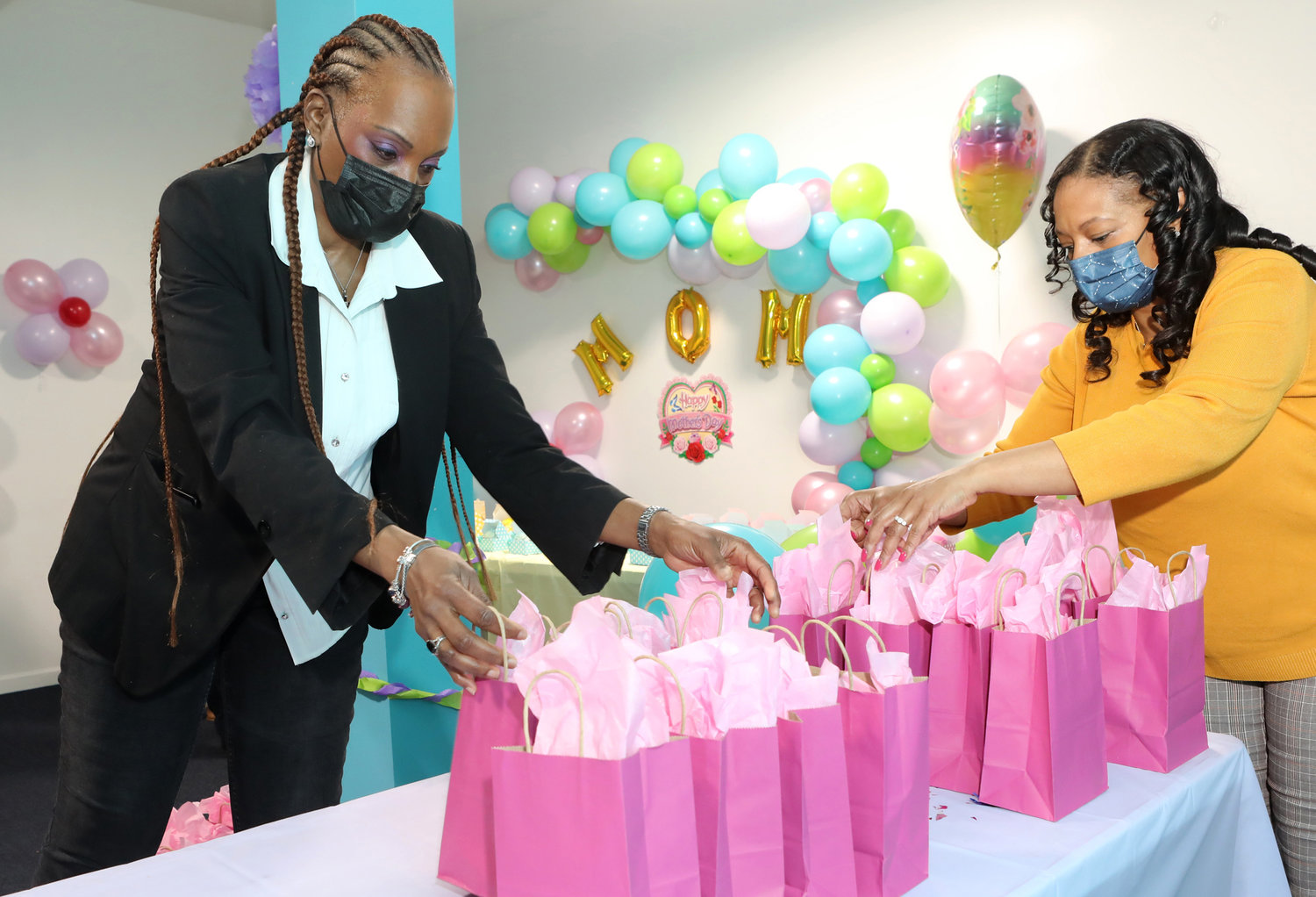 Broadway Family Plaza’s site director Darlene Hines, left, and administrative assistant Ruth Rogers set up Mother's Day gift bags last Friday at the transitional housing facility. The event was a part of the Kingsbridge Unidos produce drive, led by Jessica Woolford to ensure families were getting fresh vegetables in the wake of the coronavirus pandemic.
CHRISTINA SANTUCCI
Previous Next
By ETHAN STARK-MILLER

Sometimes it feels like a Hallmark holiday, but Mother’s Day remains a really meaningful event for many — especially moms. It’s a day when moms are appreciated for sacrifices they made, and the overall hard work it takes to raise children.

Jessica Woolford, a mom herself, wanted to do something special for Mother’s Day this year. So she focused her attention on the Broadway Family Plaza transitional housing facility in her neighborhood, bringing flowers, sweets and some fresh fruits and vegetables from the Hunts Point Produce Market to mothers there, just in time for the big day.

Woolford is no stranger to making such deliveries — it’s something she started doing last summer through an organization she set up, Kingsbridge Unidos. Its goal was to deliver fresh produce to her Kingsbridge neighbors amid the coronavirus pandemic.

Since then, Woolford and her volunteers have led seven drives, delivering more than 18,000 pounds of fresh fruits and vegetables from the Hunts Point Produce Market to her neighbors. And more recently, to residents of Broadway Family Plaza.

It all started with a call from the organization that runs the transitional facility on behalf of the city’s homeless services department, Praxis Housing Initiatives.

“This was in response to the folks from Praxis saying, ‘We want to do something special for Mother’s Day.’ And I was like, ‘Totally. I’m game,’” Woolford said. “It’s just a cool way that the community comes together to share some fresh produce with people, and spark a little joy and treat folks with dignity.”

Woolford and about a dozen volunteers took an extra step from their usual efforts to assemble gift baskets with flowers.

Opened in 2018, Broadway Family Plaza houses 83 families transitioning back to home independence providing not just an apartment, but other programs like child care and housing placement assistance, among other things.

Its existence has had no shortage of controversy, facing pushback from neighbors and Community Board 8 when it first opened, worried its existence would lead to a rise in crime and a drop in property values. Neither has happened, at least in a way directly — or indirectly — attributable to the facility’s presence.

The day started with packing produce and gift bags at the Conservative Synagogue Adath Israel of Riverdale, Woolford said. Rabbi Barry Dov Katz has been making his West 250th Street space available to Woolford’s group for its past couple of donation drives. Some CSAIR members have even started volunteering with Kingsbridge Unidos.

Once the packing was done, volunteers delivered the produce in a rented U-Haul truck. They were handed out with the gift baskets to families at the facility as part of an afternoon celebration. Their children even made cards for their mothers that were displayed.

DHS spokesman Isaac McGinn said there was a lot of excitement around the event as the gift packages were handed out.

“I would love, personally, to receive hundreds of pounds of goods from Hunts Point Market,” McGinn said. “That is incredible stuff. And so I think the families are enormously grateful for this donation. I still see food lines around the city that hadn’t stopped with the start of the pandemic. So I think folks are thrilled about this.”

One of those folks is Aleasa Jackson, a mother who lived in the Broadway facility for a year before recently moving into her own apartment in Manhattan. While there might only be one Mother’s Day each year, Jackson says a mother’s day is every day, 24/7.

Jackson not only is a full-time mom, but until her third child was born in January, she worked two jobs in Queens. She hopes to return to both soon, but for now services offered by the facility, along with events like Woolford’s produce drive, help Jackson take care of her family.

Mino Lora, a city council candidate who volunteers with Woolford’s group, says she’s impressed with what Kingsbridge Unidos has accomplished.

“She started this amazing mutual aid program, right here for the community that she grew up in,” Lora said of Woolford. “It’s so great to be coming here today. Especially on Mother’s Day weekend, to be mothers serving mothers.”

Broadway Family Plaza wasn’t the only stop for Woolford and her volunteers on Friday. They visited the Kingsbridge apartment building where her grandmother lives — a place where she spent much of her childhood, and where Kingsbridge Unidos was born.

“At the core of it is my grandma’s building,” Woolford said. “From Day One, that was like, ‘We can’t feed everyone, but we could feed a few people really well over and over again.’ And so that’s like the heart of this.”

It was state Sen. Alessandra Biaggi who first connected Woolford with the Hunts Point Produce Market, and the vendors there have supplied her with fresh fruits and vegetables ever since.

One really important part of this initiative, Woolford said, is not just donating a random assortment of produce. Instead, it’s curating the donations for the communities they’re going to. In Kingsbridge, that means mostly Latino and Latina people.

Kingsbridge Unidos is very much a family affair for Woolford — her relatives make up about half of the volunteers.

“It’s nice because then we go to my grandma’s building and now my grandma is like the head honcho because everyone knows her granddaughter brings the nice produce,” Woolford said. “So, it’s really intergenerational too. Like it’s my family. It’s the friends we have. And a lot of the same folks keep coming back to volunteer.”