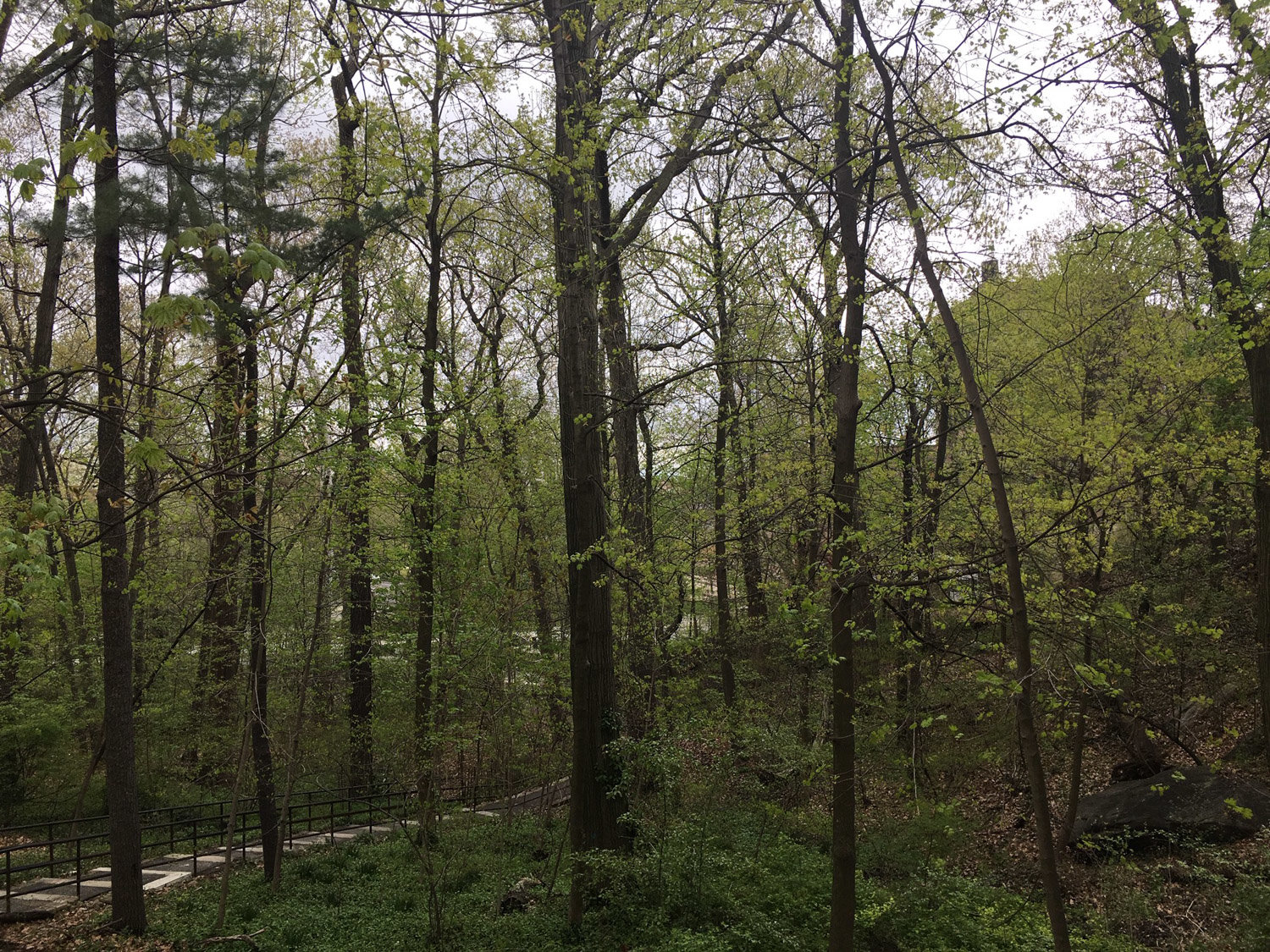 It’s a beautiful summer view of Brust Park from Manhattan College Parkway, a view some believe might be threatened by development nearby.
Courtesy of Aurora Armendi
By SURA JESELSOHN

Riverdale is full of parks. Some are quite large, like the 114 acres of Riverdale Park, while others are relatively small, like the less than 2 acres that make up Brust Park, probably known primarily by those who live in its proximity.

With one entrance on Manhattan College Parkway and another on Waldo Avenue, Brust Park consists of a gardened upper section and a relatively undisturbed lower section.

Brust Park was acquired in 1882 by New York City in a condemnation proceeding, but remained nameless until Mayor Fiorello LaGuardia named it Brust Square in memory of Corporal Charles Brust of Hull Avenue, who was killed in August 1918 during World War I. In 1997, parks commissioner Henry Stern renamed it Brust Park.

The park now has two separate but intertwined “claims to fame.” The first is the small single-family home abutting the park on the southern end of the lower section that has been sold off to a developer who plans to replace it with a 29-unit, five-story building. This led to the second, which is that the horrified neighbors who appreciate the moderate amount of greenery and nature in one of the most congested parts of Riverdale commissioned a survey of plants and birds found inside the park.

The neighbors fear the park will be adversely affected by the rigors and debris of a large building project as well as by the increased shade that will ultimately be cast by another apartment building.

The results of the survey are a mixed bag. Twenty-three different tree species were tallied, seven non-native. Of the 11 shrubs found, again seven are non-native.

Forty-two plants were listed as herbaceous ground cover and vines, but 18 of them are non-native. Lest we get entirely carried away with the notion that all native plants are inherently good, one native growing in profusion in the park is the infamous Toxicodendron radicans, or poison ivy.

Bird species were also tabulated. A dozen species were noted, of which three are non-native — the rock pigeon (Columba livia), the house sparrow (Passer domesticus) and the European starling (Quiscalus quiscula).

The annoying and ubiquitous mourning dove (Zenaida macroura) can also be found there. Surprisingly, it is a native and apparently considered a fine game bird where hunting is a common sport.

Butler classifies Brust Park as an example of a “rich mesophytic forest,” where mesophytes are terrestrial plants. These are “forests of mixed trees with rich, seasonally moist and well-drained acidic soils,” according to a parks department native species planting guide.

Despite the large number of non-natives, Butler feels the park already contains the backbone of useful natives for creating a lovely understory. For example, Persicaria virginiana, Circaea lutetiana and Lindera benzoin, together with additional native shrubs such as Rhododendron periclymenoides and witch hazel (Hamamelis virginiana) — and flowering plants such as Actaea racemosa and Helianthus divaricatus — would make the park very attractive.

In addition to the Van Cortlandt Park Alliance, there are at least two other groups in Riverdale devoted to a specific park.

The Stewards of Henry Hudson Park have been doing amazing work extending plantings of shrubs and bulbs along Kappock Street and Independence Avenue. But central to this story are the Stewards of Brust Park, led by the indefatigable Jacqueline Hosford.

For the past eight years, the Brust Park stewards have worked to beautify the park and educate its visitors. Both upper and lower sections have sign boards with pictures of the flowers that have been planted there as well as expected bloom times.

For those not familiar with the park, there also is a seasonal stream ending in a lower boggy area that can be accessed immediately off Waldo Avenue. The survey showed the presence of the infamously named skunk cabbage (Symplocarpus foetidus). When I last visited on Feb. 3, none were yet pushing out of the muck, although this is the usual time for them to start appearing.

It had been a hope of the neighborhood that the yard of the residential home would be officially added to Brust Park and that the building itself could be used as a community resource. The plans for the apartment building, however, were approved at the end of January.

Should this building project go forward, however, it would be illuminating to re-survey the area in five years in order to document changes in the park. Somehow, I do not believe that either the park or the neighborhood will be the better for it!

PS: For those who would like to help continue documenting Brust Park’s plants and birds, you can do so by using the iNaturalist app.