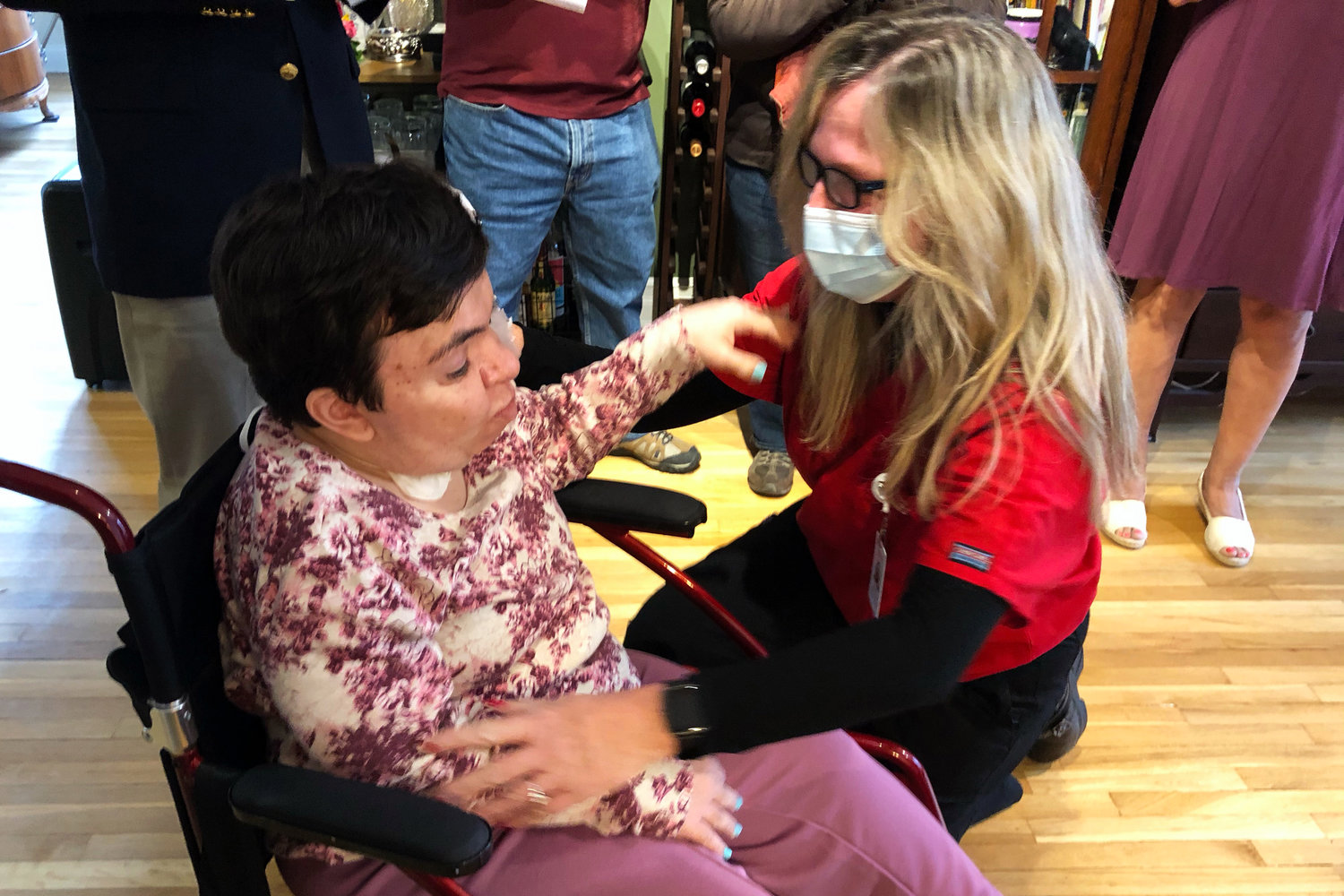 Lauren Wechsler, left, and Nancy Lonergan embrace after Lauren was presented with an honorary nursing certificate. Lauren dreamed of attending Columbia School of Nursing, but was never able to because of severe mental and physical disabilities.
Courtesy of Norman Wechsler 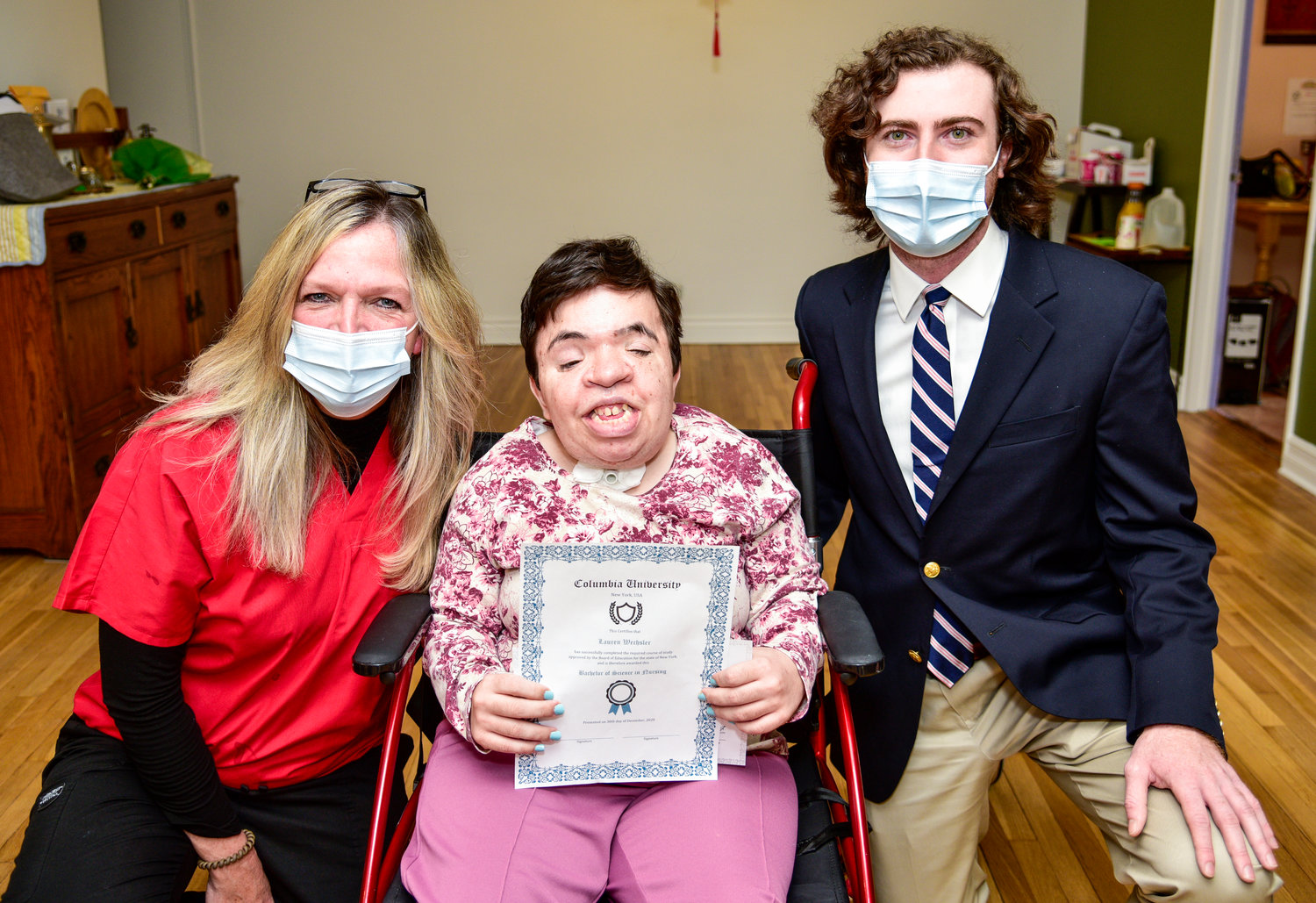 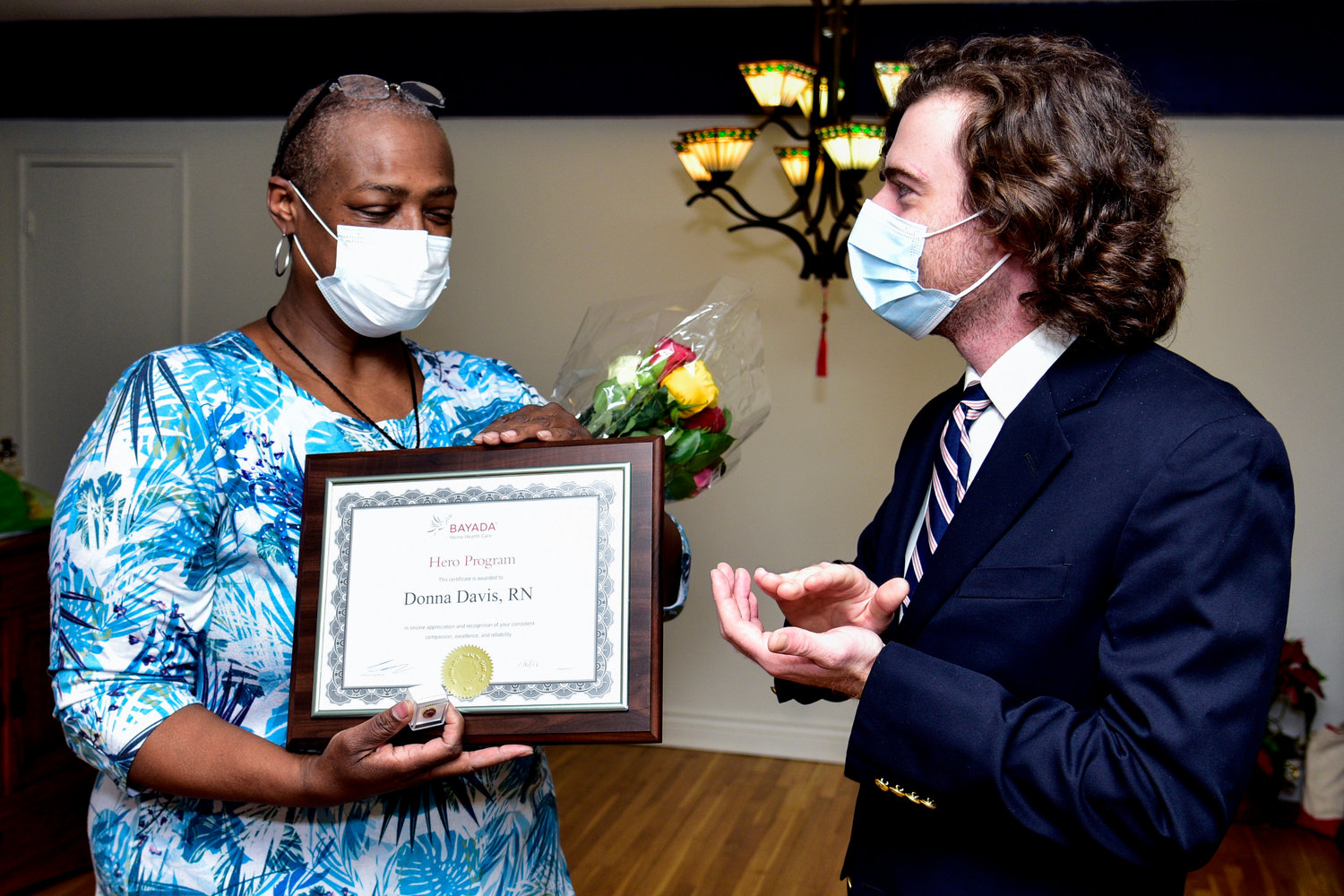 Although she lives with severe mental and physical disabilities, Lauren Wechsler greets every day with a smile. This positive attitude was one of many reasons Bayada Home Health Care made her an honorary nurse last week.
Courtesy of Donna Davis/Ms. Davis Photography 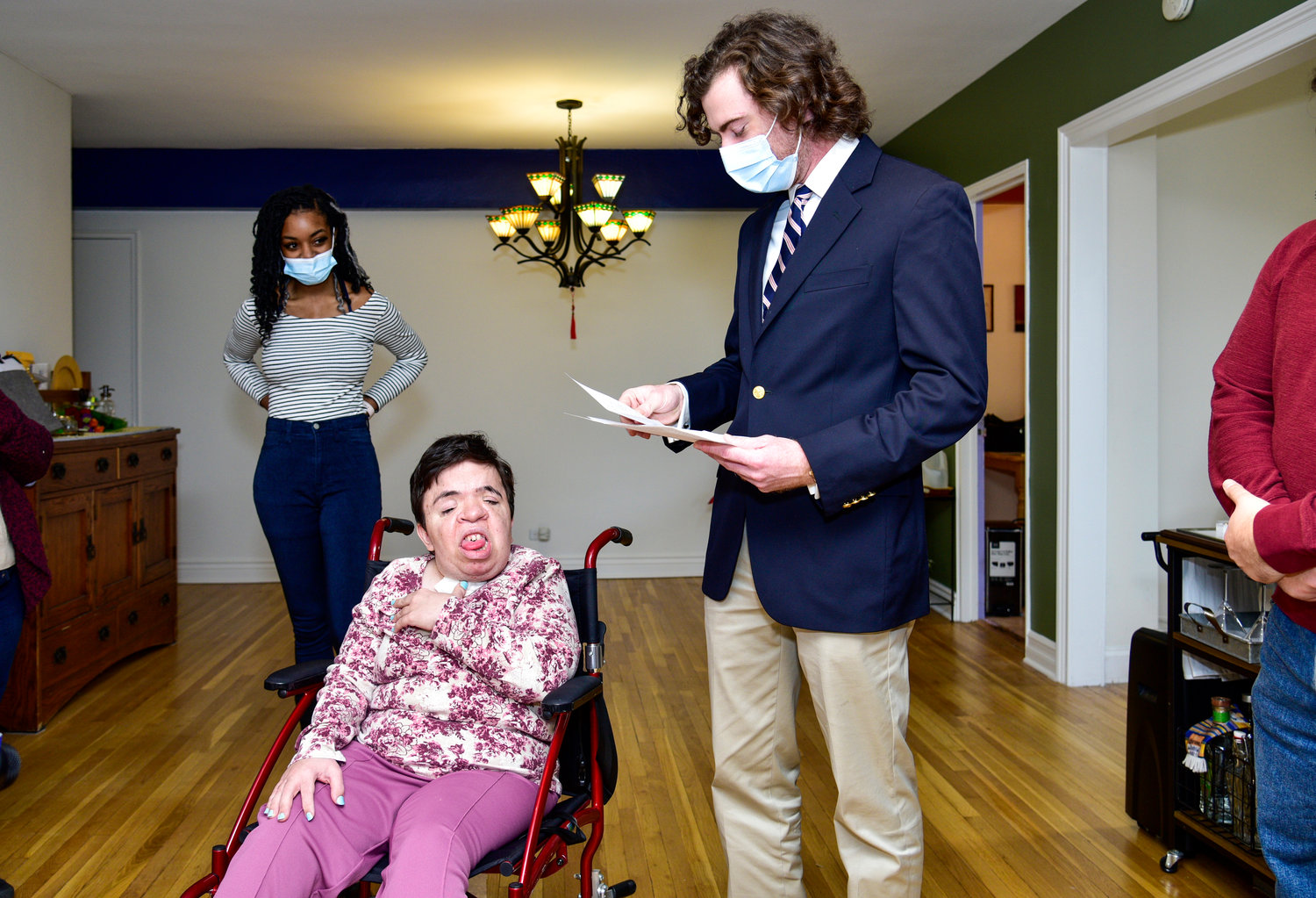 For many years, Lauren Wechsler dreamed of becoming a nurse, but was never able to because of severe physical and mental disabilities. But Bayada Home Health Care — which oversees Lauren’s in-home care — wanted to make her dream come true, presenting her with an honorary nursing certificate last week.
Courtesy of Donna Davis/Ms. Davis Photography 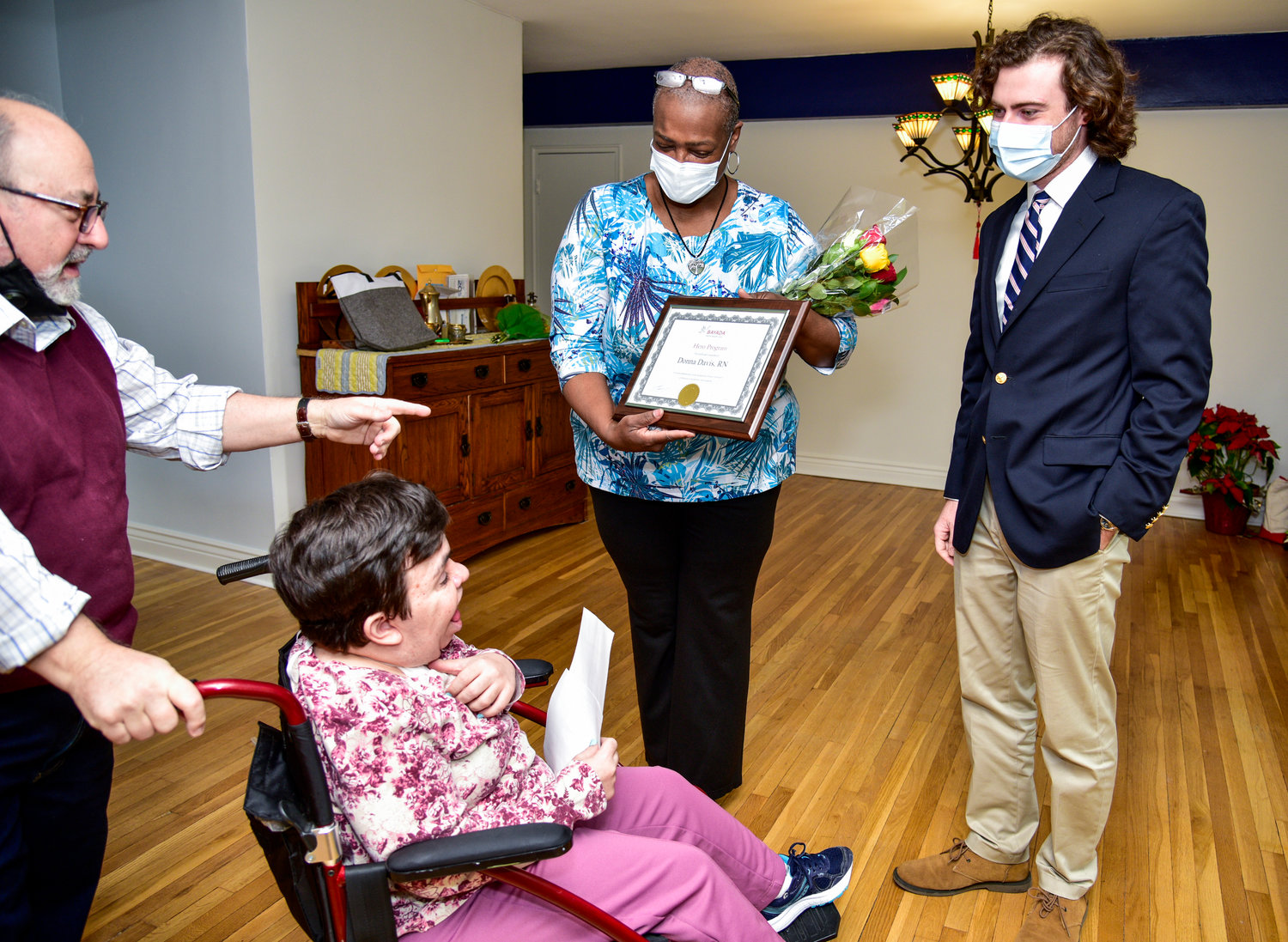 Both Lauren Wechsler and Donna Davis were honored by Bayada Home Health Care Jan. 6. Lauren became an honorary nurse while Davis received the company’s Hero Award for her work with Lauren.
Courtesy of Donna Davis/Ms. Davis Photography
Previous Next
By ROSE BRENNAN

For most of Lauren Wechsler’s life, the odds have been stacked against her.

She was born with Pfeiffer syndrome, a rare genetic disorder that causes bones in the skull to fuse prematurely, leading to severe mental and physical disabilities. She’s had more than 30 surgeries throughout her life to address those disabilities, contracting near-fatal cases of MRSA and pneumonia along the way. And to top it all off, last year, Lauren was stricken with COVID-19.

But Lauren survived it all. And through her seemingly never-ending health ordeals, she maintained a positive attitude and an indomitable spirit. That didn’t go unnoticed. Bayada Home Health Care — the in-home agency that cares for Lauren — wanted to do something to honor her overall optimistic demeanor and desire to live every day to the fullest by making one of her lifelong dreams come true.

Lauren’s physical and mental disabilities are severe enough to require the full-time care of a nurse — albeit at home. And for many years, Lauren herself has dreamed of becoming a nurse. But she didn’t want to take care of patients in their homes. Instead, she wanted to be front and center to all of the action of a hospital as an emergency room nurse.

It was something Lauren saw firsthand from her experiences battling the coronavirus in the hospital, according to her mother, Daisy Concepcion.

“Lauren was … on a ventilator for two weeks (and) couldn’t even talk,” Concepcion said. She “comes out and says, ‘Now I understand what’s happening in the hospitals, and I need to help.’”

Norman Wechsler, Lauren’s father, said she began a well-thought-out plan to make her dream of becoming a nurse come true. He noted her prowess on the computer, which allowed her to research nursing schools. And before long, she had her whole life at Columbia School of Nursing planned out.

“Just today she wrote me a note: ‘When are we going to visit Columbia School of Nursing?’ Norman said. “She also identifies that as the place where she’s going to meet a boyfriend. She has this pretend fantasy that she’s going to get a boyfriend and that (they’ll) take the nurse with them, and they’re going to live on their own in Queens.”

Unfortunately, due to Lauren’s disabilities, she wouldn’t actually be able to attend Columbia — or any nursing school, for that matter. Nevertheless, Bayada wanted to honor her for exemplifying nearly every characteristic they wanted to see in a nurse, short of a nursing degree itself.

And the answer was clear: Make Lauren an honorary nurse.

According to Chris Dunn, Bayada’s client service manager, Lauren’s desire to become a nurse was no secret. As a result, they wanted to give her an experience she’d never forget to reward her for her perseverance and optimism.

“Even though she’ll never be able to actually be a nurse,” Dunn said, “this is the closest thing that we can do for her to help make that dream come true as much as possible.”

Although it was purely honorary, Bayada pulled out all of the stops for Lauren to make the experience as close to the real thing as possible. Representatives from the company replicated a nursing ceremony last week, similar to one an actual nursing school graduate would undergo. They awarded her with a nursing ID card, a tote bag to store snacks during her “nursing shifts,” and her own set of scrubs. And to top it all off, Dunn printed a mock diploma from Columbia School of Nursing for Lauren to proudly display.

But Lauren wasn’t the only person Bayada honored that day. Donna Davis, a nurse who’s worked with Lauren since 2012, received Bayada’s Hero Award, which honors employees that demonstrate Bayada’s pillars of integrity, excellence and reliability.

And to Dunn, there’s no better example of those pillars than Davis.

“Donna goes above and beyond, in every sense possible,” he said. “Especially in the way that she cares for and has taken care of Lauren.”

Over the past eight or so years Davis has worked with Lauren, she can only remember a few times when Lauren wasn’t cheerful or happy. Those days do come, but overall, Davis knows Lauren as an optimistic and positive patient.

“There’s very few things I’ve ever heard her be down about — and the coronavirus is one of them,” Davis said. “But she’s always happy to meet people. Every day that she has here, she’s very glad to be here. So that’s always nice to see.”

Davis’ background is in critical care — which she said is a notoriously difficult position to fill when it comes to home care.

Her daily duties include making sure Lauren’s tracheostomy — a hole in Lauren’s neck that allows her to breathe more easily — is clean and functioning, as well as other day-to-day responsibilities that require the advanced care of a nurse.

“This is something that takes a big load off of families,” Davis said. “To know that they have a licensed professional working with them to keep this family member as healthy as we can, so that they can have the best quality of life that (they’re) able.”

While the ceremony was a complete surprise for Lauren, her parents and Davis knew of Bayada’s plans for weeks before the ceremony itself. And Concepcion described it as the perfect Christmas gift for Lauren — who, yes, still believes in Santa Claus.

Concepcion was touched that Bayada would devote time specifically to Lauren while they have so many other patients. And although Lauren already treasures every day she’s alive, Concepcion believes becoming an honorary nurse will make whatever time she has left that much sweeter for Lauren.

CORRECTION:  The last name for Lauren Wechsler and father Norman Wechsler was misspelled in the Jan. 14 edition.