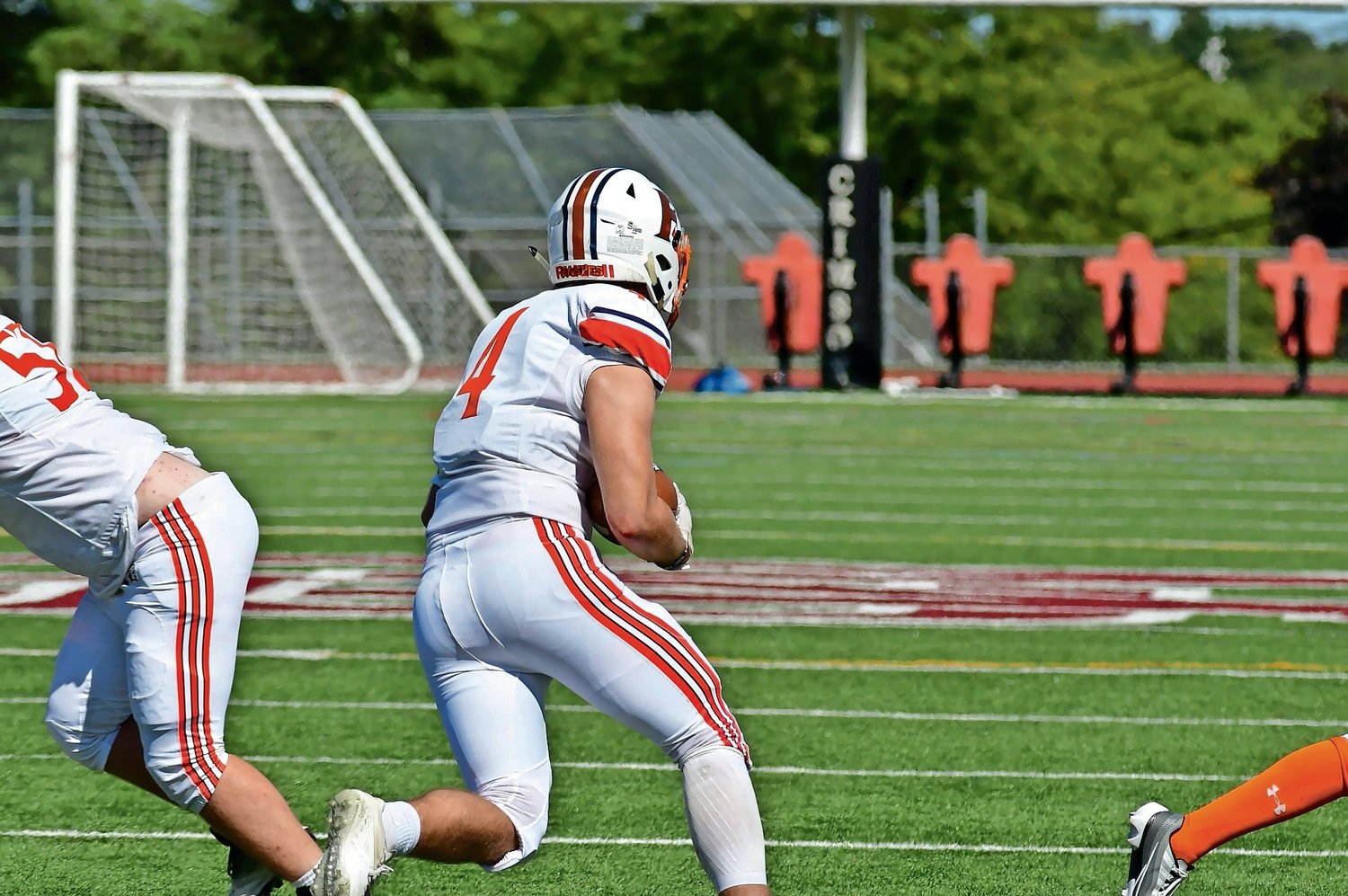 Blake Koons, Fieldston Eagles full back, runs for some of his game-leading 156 all-purpose yards against Riverdale Country Oct. 8. The Eagles won that rivalry game, 32-7.
Gene Assaf
By Mason Moses

The well-prepared Fieldston Eagles football team controlled all aspects of the game Oct. 8 leading to a commanding 32-7 victory against the previously undefeated Riverdale Falcons.

The Eagle charge was led by Blake Koons, junior FB, who accumulated 156 all-purpose yards (49 rushing, 107 receiving) and 4 rushing touchdowns. In addition, junior QB Wes Heiman completed more than 270 yards in the air on 16-29 with 1 INT.

The Falcon defense had no response to the Eagle attack. In fact, Jackson Fauvre, star tight end, was able to beat double teams gaining over 90 yards receiving for the Eagles.

“It really felt like Riverdale was throwing everything at me,” Fauvre said. “I just give credit to Wes, the O-line, and Gus (Ornstein, head coach), for putting in situations to succeed.”

The Eagle defense was just as dominant. It was led by seniors Quincy Levitt (defensive end) and Chase Mitchell (middle linebacker). The two captains created chaos all day. They combined for multiple tackles for loss including multiple sacks.

As for Riverdale (5-1), the lone bright spot was the play of junior quarterback James Spiegel. He finished with 58 rushing yards and 72 passing yards. However, he threw 2  INTs.

(Score update: The Eagles were shut out 49-0 in a non-league game against Poly Prep Country Day in Brooklyn on Oct. 15. Riverdale defeated Hackley, 31-6, on Oct 15.)

Looking at the playoff picture, the 2-4 Eagles are sitting comfortably at the No. 6 seed. This upcoming week, the team travels to Horace Mann to take on the Lions. With a win this Saturday, the Eagles can clinch a playoff spot and create an opportunity for a home playoff game.

The Falcons, who already have a top seed in the Metropolitan Independent-C league, are scheduled to play Dalton Saturday.

The DeWitt Clinton Governors walloped the visiting Bryant Owls football team by a count of 42-6 in Oct. 7’s league outing.

With the win, DeWitt Clinton improves its record to 3-2 on the season.

The Spartans went in to the outing with a record of 3-0. John Adams won 32-18 in their recent league outing against Columbus (Bronx).