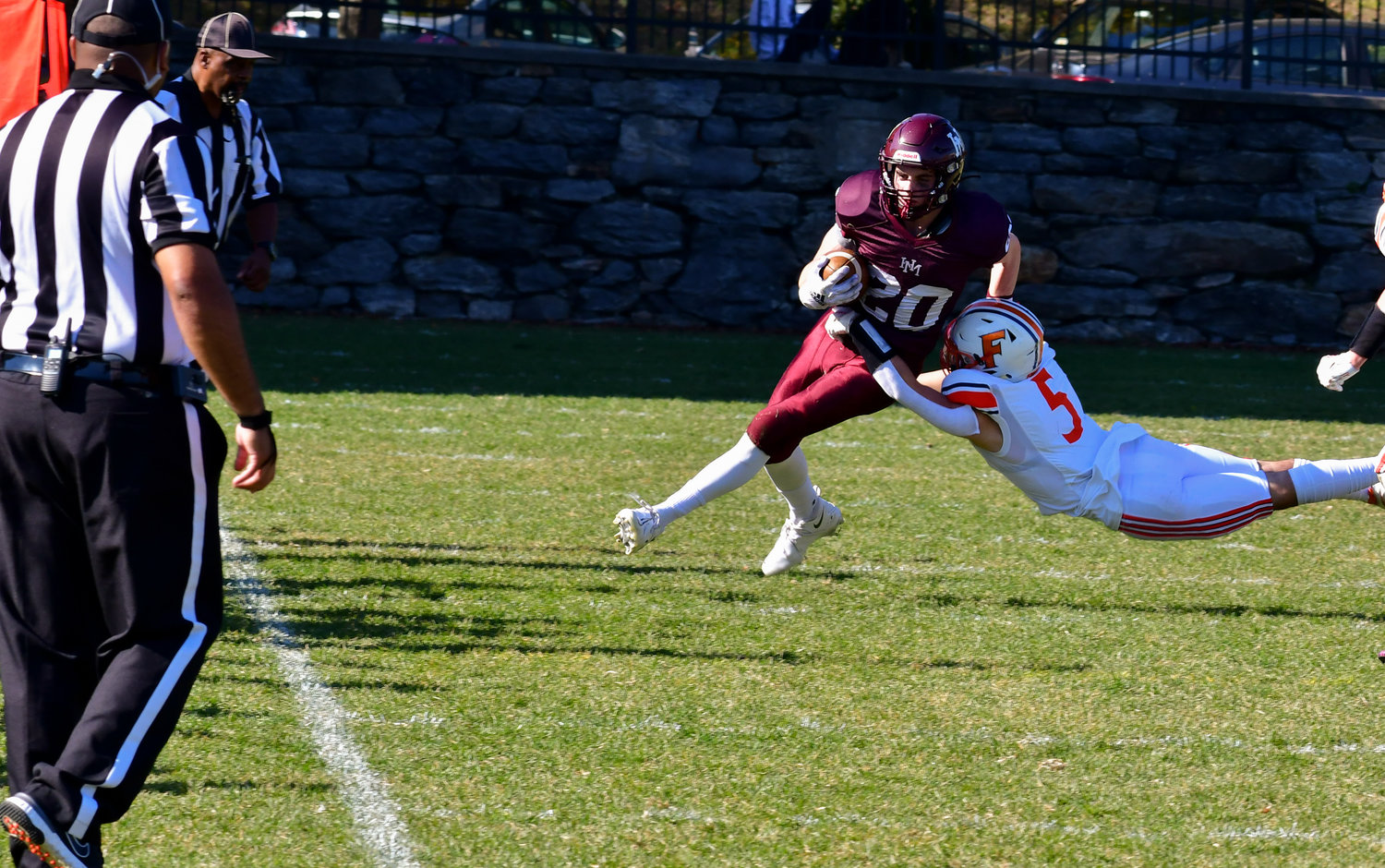 A Horace Mann running back tries to evade a Fieldston player during the Lions' blowout win over the Eagles.
Gene Assaf 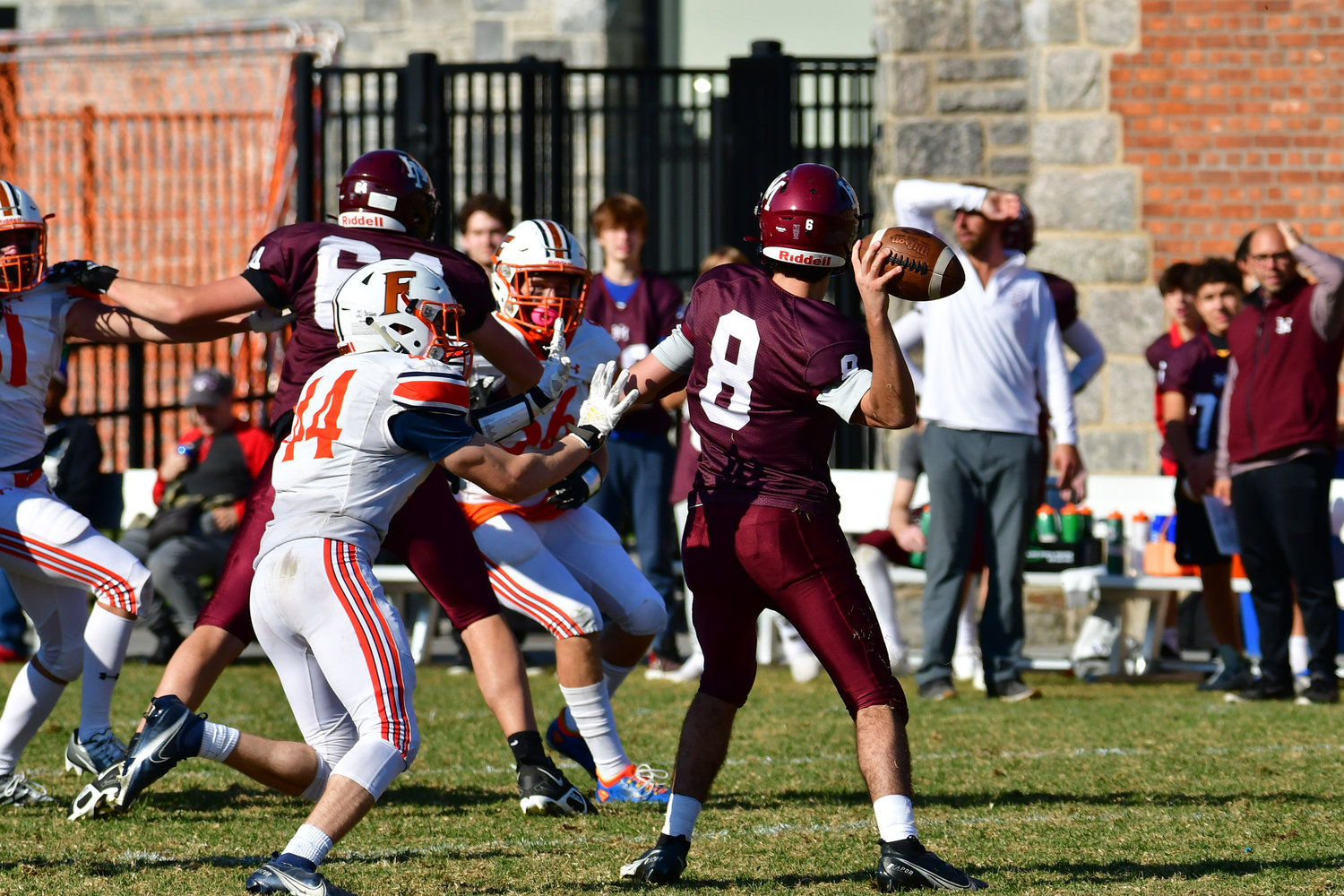 The Horace Mann School quarterback prepares to fire a pass downfield against Fieldston Saturday during the Lions’ 41-15 win.
Gene Assaf
Previous Next
BY MASON MOSES

Coming into Saturday’s matchup with Horace Mann School, the Eagles were already without star fullback Blake Koons, who suffered a shoulder injury in last week’s blowout loss at Poly Prep.

Then in the first quarter, star quarterback Wes Heiman went down with an injury. In the end, the Eagles offense couldn’t keep up with Horace Mann in a 41-15 loss to close out the regular season.

“Blake (Koons) has been a key part of our offense this year,” said Declan Semler, senior offensive lineman. Over the course of the season, Koons has averaged over 80 yards a game as well as been responsible for 6 TDs.

“We will need to adjust our gameplan with (Koons) out of the lineup, but I’m confident in our team and coaches to deliver,” Semler said.

That led the strong Fieldston attack to rely heavily on their passing game. However, an early first quarter injury to the Heiman left the Eagles without two of their best playmakers for the remainder of the contest. Heiman hopes to be back for next week’s game.

The Eagles were never in this contest as they trailed 14-0 at halftime and were outscored 27-15 in the second half.

Coach Gus Ornstein turned to senior Rowhan Daly to take over the quarterback duties. Daly made plays for the Eagles with his athleticism, breaking many tackles and picking up many yards after contact. In addition, Daly connected with senior wide receiver Aidan Ginor for an 80-yard touchdown. Ginor evaded multiple Lion defenders and turned a short reception into a highlight play of the year.

With this loss, the Fieldston Eagles finished the regular season with a 2-5 record. Before this game, the Eagles had already clinched the No. 6 seed in the Metropolitan Independent A-League. However, with a win, they would have had an opportunity to have a home-field advantage in their first playoff game.

Now, Fieldston will travel to Brookville to take on the Long Island Lutheran Crusaders in a No. 3-seed vs. No. 6-seed match-up. A shared opponent between the two squads include the Hackley Hornets.

The Eagles opened their 2022 campaign by beating the Hornets in a dominant 27-2 victory, while the Crusaders also came out on top against the Hornets, 12-0, during week 2 of the season.

The Falcons of Riverdale Country School finished the regular season undefeated in conference play with a 6-0 record and 6-1 overall as they toppled Dalton, 27-7 Saturday.

Riverdale got off to a fast start outscoring Dalton 13-0 in the first quarter and 20-0 by halftime.

Both teams exchanged touchdowns in the second half.

While statistics for the game were not available, for the season Riverdale averaged about 125 yards passing and nearly 150 yards rushing per game. As a team, the Falcons averaged about 27 points per game.

Individual leaders included quarterback James Spiegel, who rushed for 110.2 yards and passed for 120.2 yards per game while on defense Cameron Sewell averaged over five tackles per game.