Eateries begin to reopen, but will it ever be same? 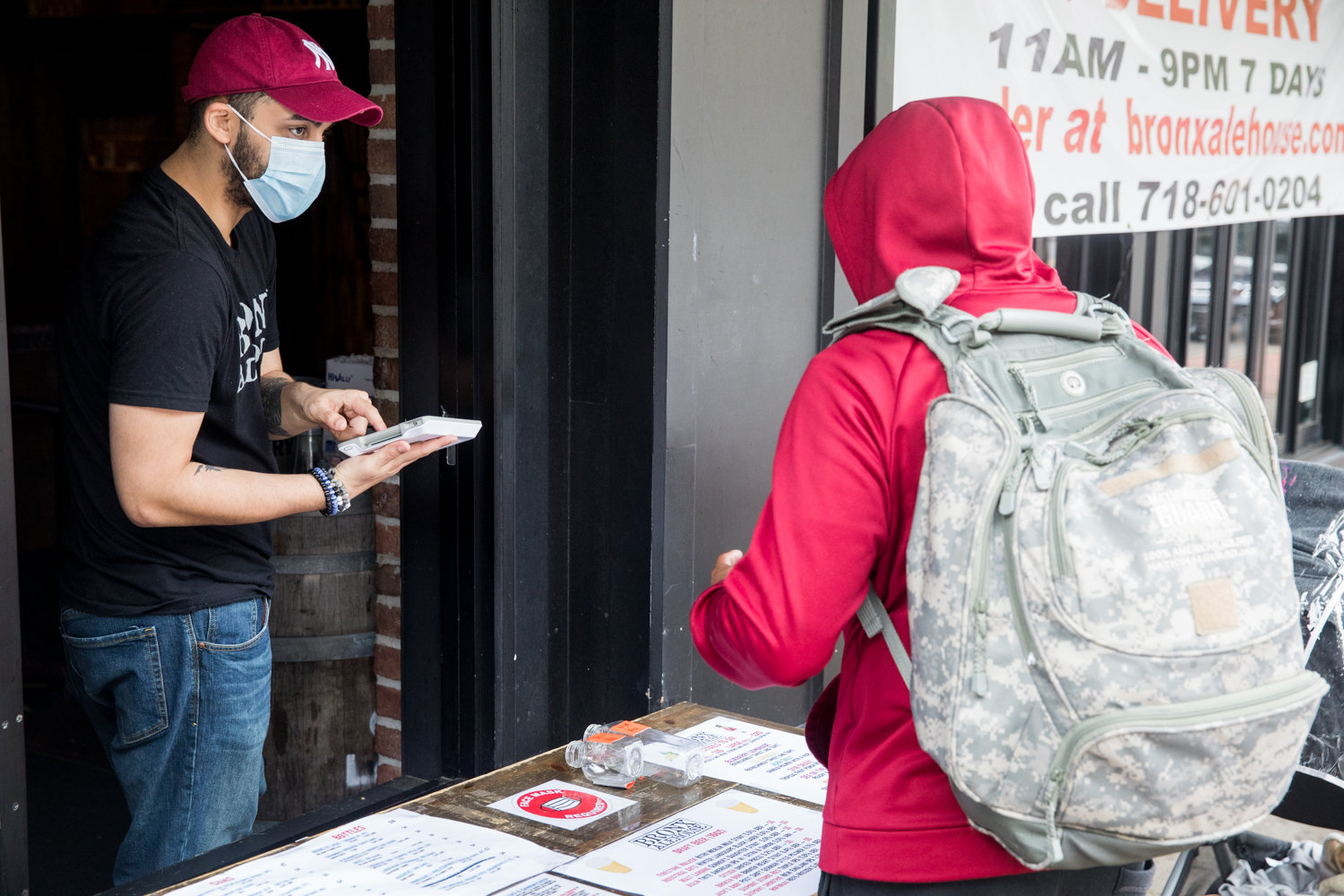 Kenneth Burgos takes a customer’s order at the Bronx Alehouse, which has adapted its business to the challenge posed by the coronavirus pandemic. People have continued to support the eatery, and while it has managed to stay open, business hasn’t been the same.
JULIUS CONSTANTINE MOTAL 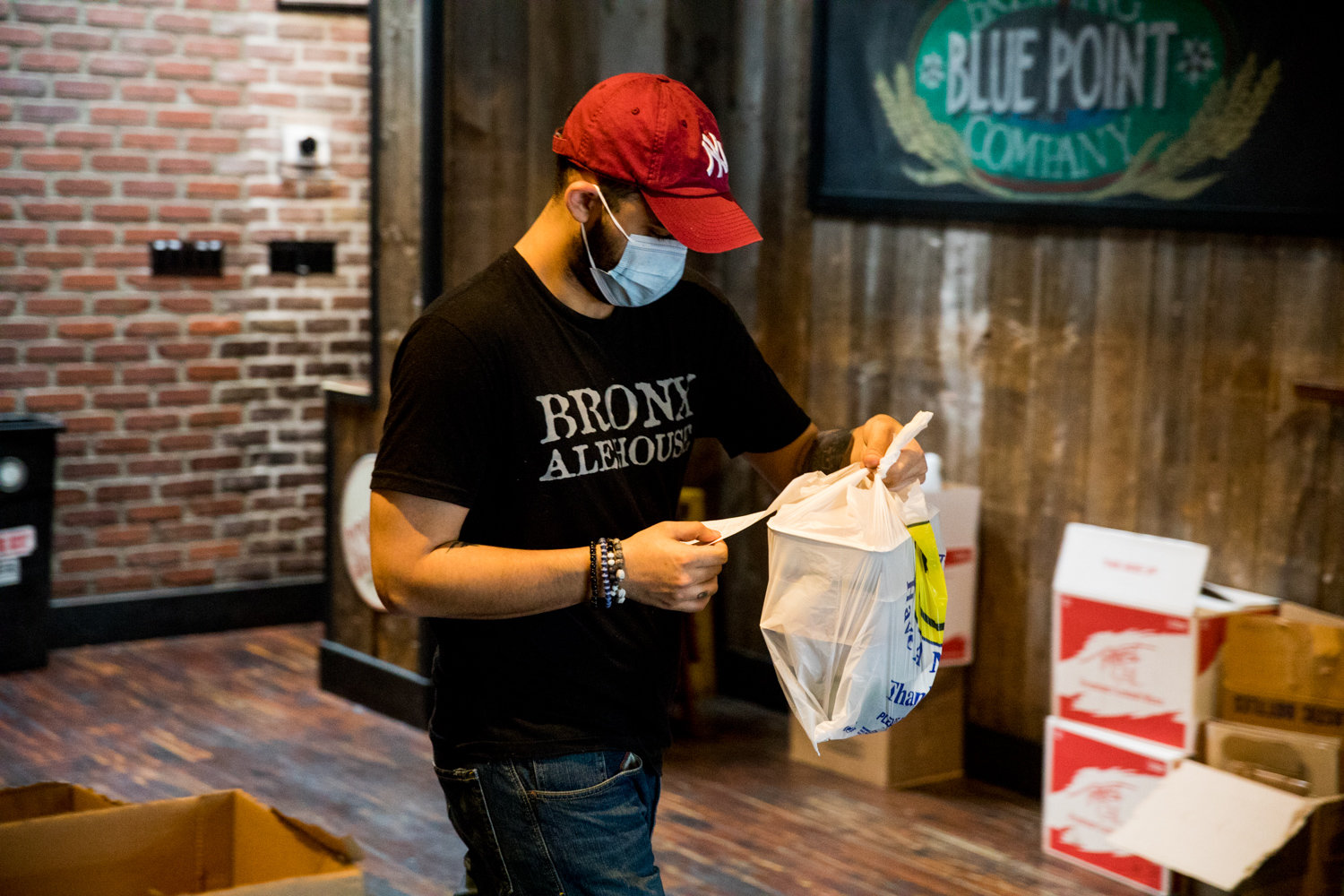 Kenneth Burgos checks a customer’s pick-up order at the Bronx Alehouse, which has managed to stay open despite the coronavirus pandemic by offering takeout and delivery.
JULIUS CONSTANTINE MOTAL 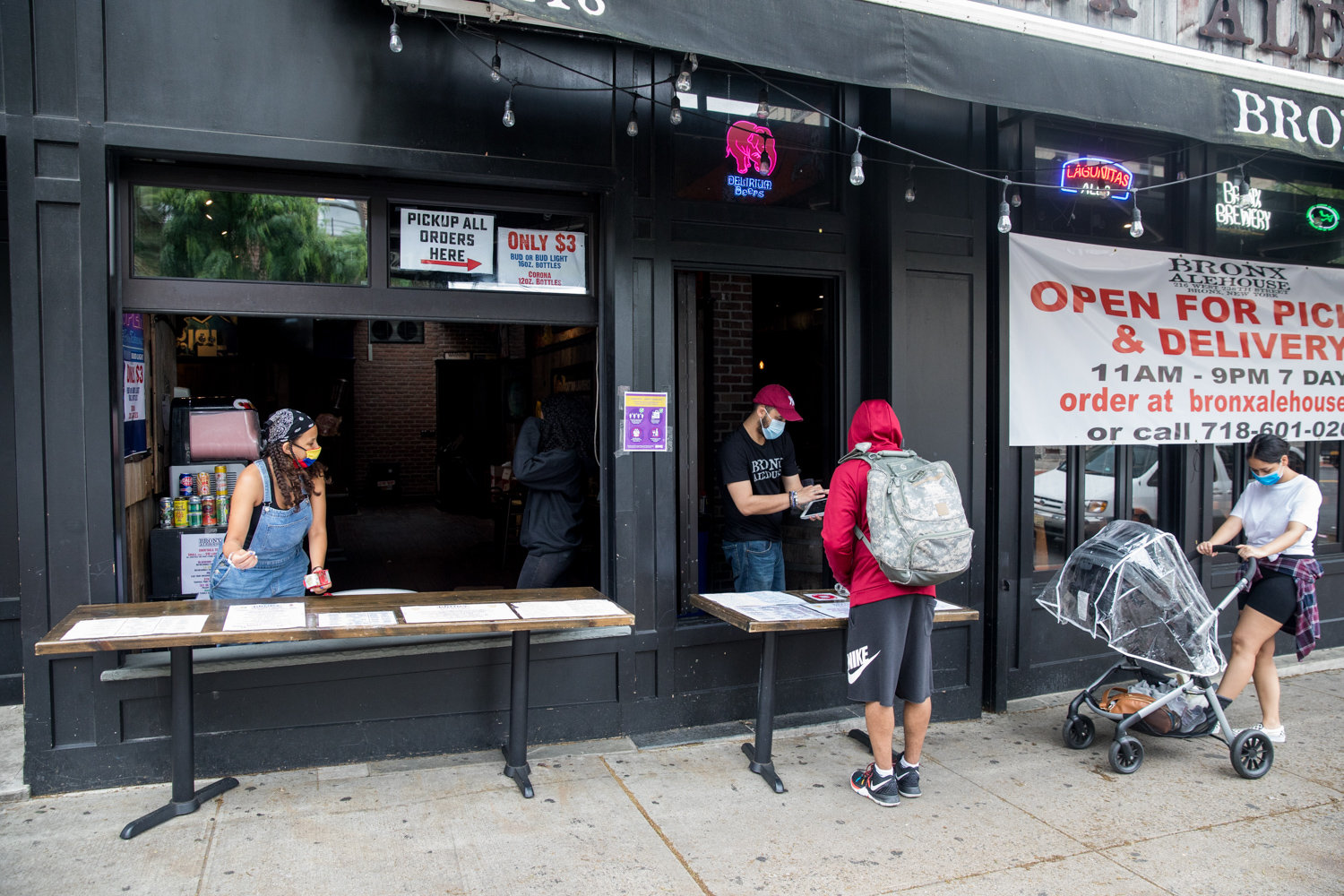 The Bronx Alehouse has adapted its business to curbside pickup and delivery in order to stay open during the coronavirus pandemic.
JULIUS CONSTANTINE MOTAL 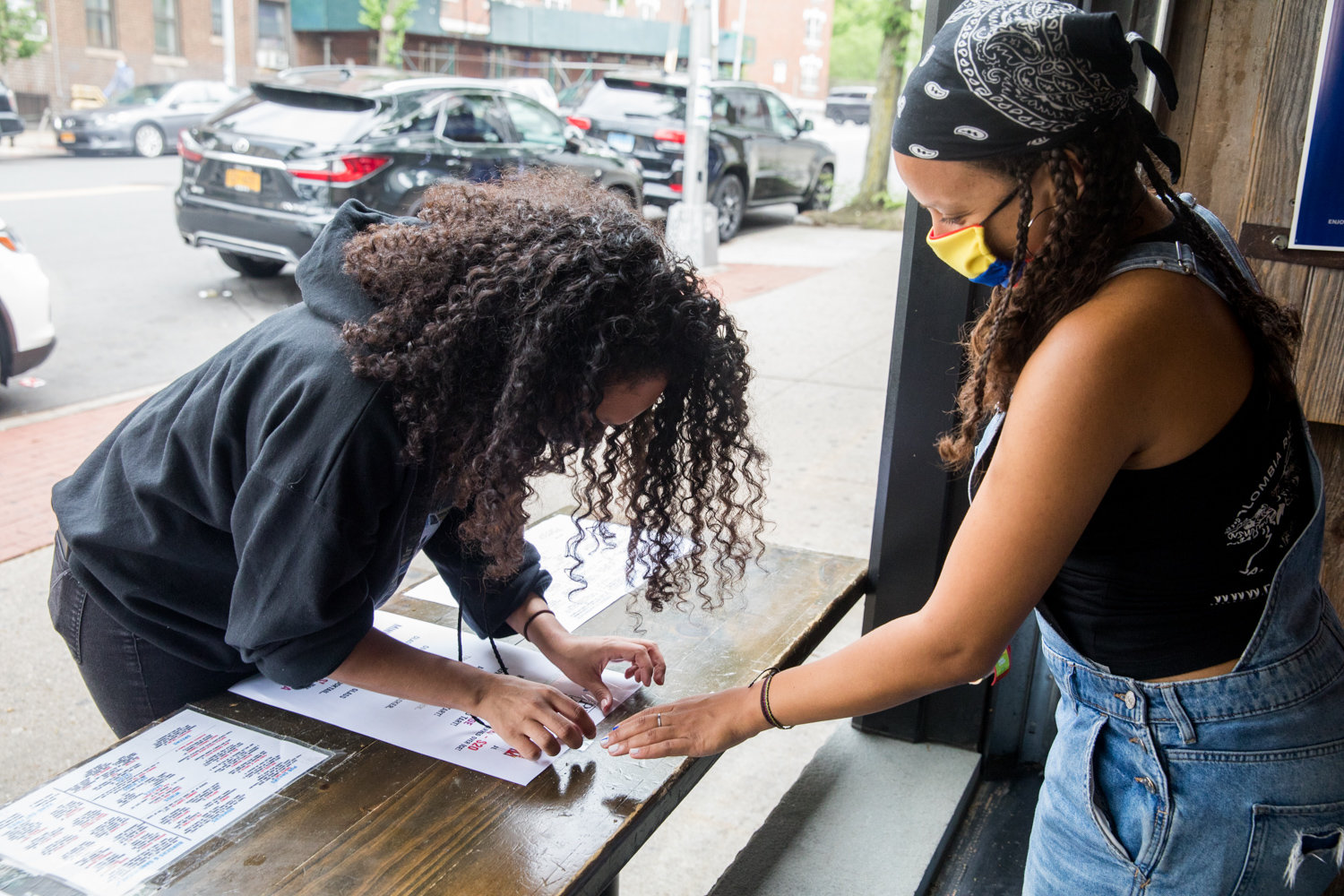 Irene Luna, left, and Dom Jackson tape a menu to a table in front of the Bronx Alehouse, which has managed to stay open during the coronavirus pandemic by offering takeout and delivery.
JULIUS CONSTANTINE MOTAL 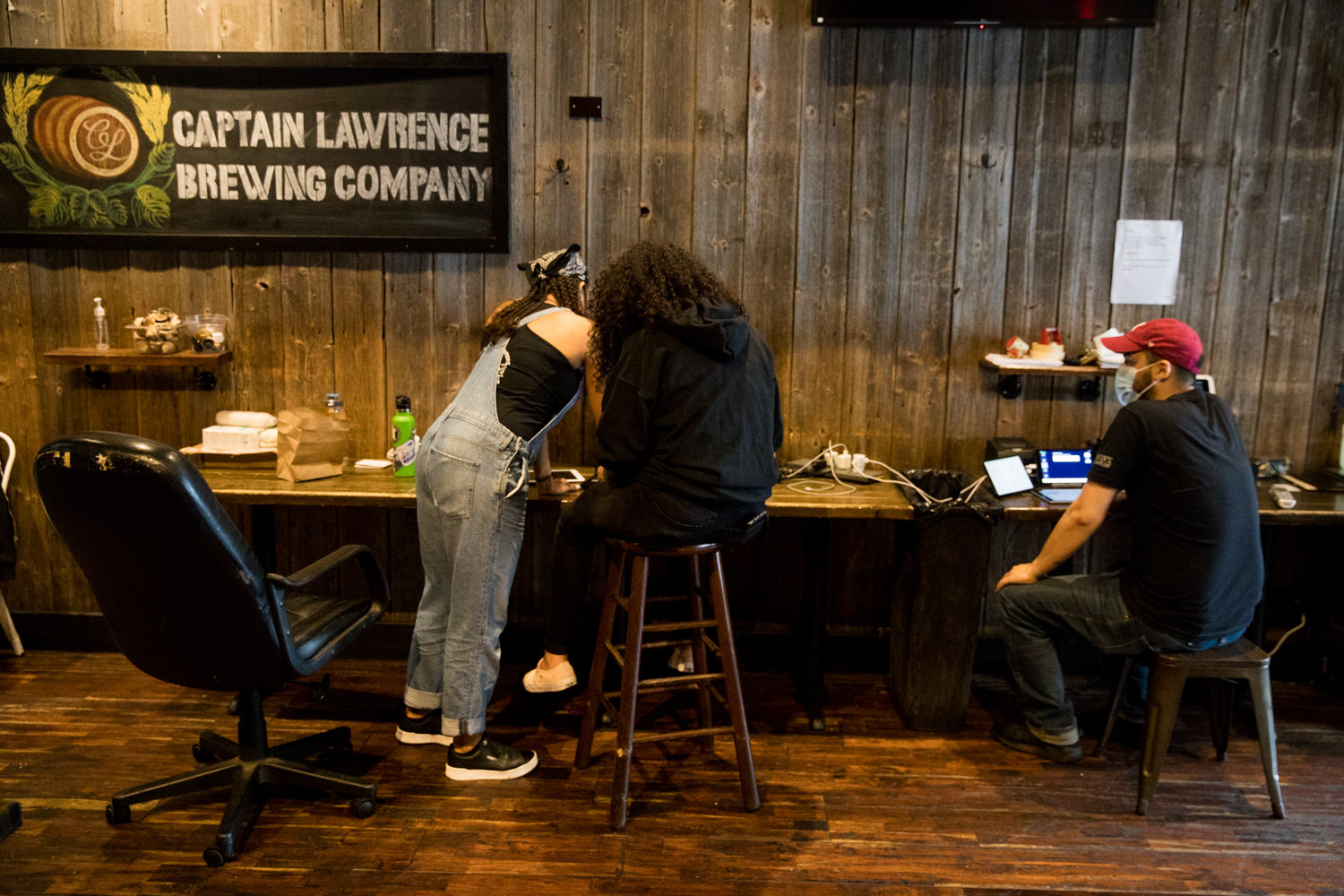 Dom Jackson, left, Irene Luna and Kenneth Burgos work inside the Bronx Alehouse, one of a number of small businesses that has managed to stay open during the coronavirus pandemic.
JULIUS CONSTANTINE MOTAL
Previous Next
By MAYA KATZ

With summer approaching, the first phase of reopening on the other side of the coronavirus pandemic couldn’t come soon enough for New York City, especially for businesses here in the Bronx.

While businesses deemed “essential” by the state have had at least some leg up over others over the past three months, it still hasn’t been easy keeping the doors open. Inventory prices have fluctuated. Hours have been cut. Staffing often is low.

Restaurants have had to change the way they serve customers as the notion of sitting down in an air-conditioned dining room on a nice sunny day is quite distant in a COVID-19 world.

Many restaurants, like the kosher Mexican eatery Carlos & Gabby’s in North Riverdale, have survived on both pick-up and deliveries since mid-March. The restaurant’s owner, Ralph Haber, probably stressed a little more than his counterparts elsewhere in the city, especially since his eatery was right in the shadow of SAR High School, the first school in the state to shut down because of the coronavirus all the way back on March 3.

Most of Haber’s part-time employees were from SAR and Yeshiva University, another institution closed earlier than most, quickly drying up his Carlos & Gabby’s staff.

Catering had been a big part of Carlos & Gabby’s, but all events were canceled once the pandemic took hold. Now, deliveries make up much of the business. Before the pandemic, deliveries to Riverdale were free, while areas outside the community picked up some sort of delivery fee based on distance. Now, deliveries pretty much everywhere are free — except to New Jersey, which is still a target market for the restaurant, but with substantially reduced delivery fees.

“Customers have responded with gratuities that I’ve never seen before,” Haber said. “They are so grateful that we are open, and they are happy that someone is driving to deliver their food.

I can’t tell you how many people have called me up and said, ‘thank you for dinner.’”

Bronx Alehouse closed a little later than Carlos & Gabby’s, down the hill at its cozy West 238th Street location not far from Broadway. That transformed the spacious pub into a takeout business initially before closing to ensure the safety of its employees. The eatery reopened at the end of April, resuming takeout and delivery.

Creating that delivery model wasn’t easy, since Bronx Alehouse doesn’t have a delivery staff. Instead, the restaurant has partnered with online delivery services like UberEats and DoorDash. And having those offerings can impact an already severely damaged bottom line, Bronx Alehouse owner James Langstine said.

“The apps take a fairly large percentage of your business,” he said. “But we work with them because it is a pretty daunting task to scale up an effective delivery force, especially since we’ve never done it before.”

Aside from operational changes, Langstine says the emotional aspect of the restaurant during the pandemic has made it a very different place to run.

“We were a gathering place for so many people,” he said. “It was far more geared towards people meeting here and hanging out than it was geared towards just pumping food out.”

The interior of the restaurant has been modified so that employees can pack takeout orders efficiently. As a bar and restaurant, the Bronx Alehouse typically had late hours, but since the pandemic — and later the curfew — they now close at 6 p.m.

As far as reopening — which could take place as early as June 22, if New York City successfully makes it into the second phase — there is still plenty of uncertainty on how restaurants can operate. However, news on that front seems to change almost on a daily basis.

Langstine hopes to expand outdoor seating at Bronx Alehouse for dine-in customers. When they might be able to return inside and enjoy some of that great air-conditioning on a hot, summer day? That’s anyone’s guess, but Langstine is prepared to move tables around and rearrange the interior to ensure proper social distancing.

In the meantime, it’s all about trying to get through the next day, and the next.

“We see the same people who were regular customers coming to pick up food,” Langstine said. “Both because they enjoyed what we served and being here before the pandemic, and because they wanted to show their support.”