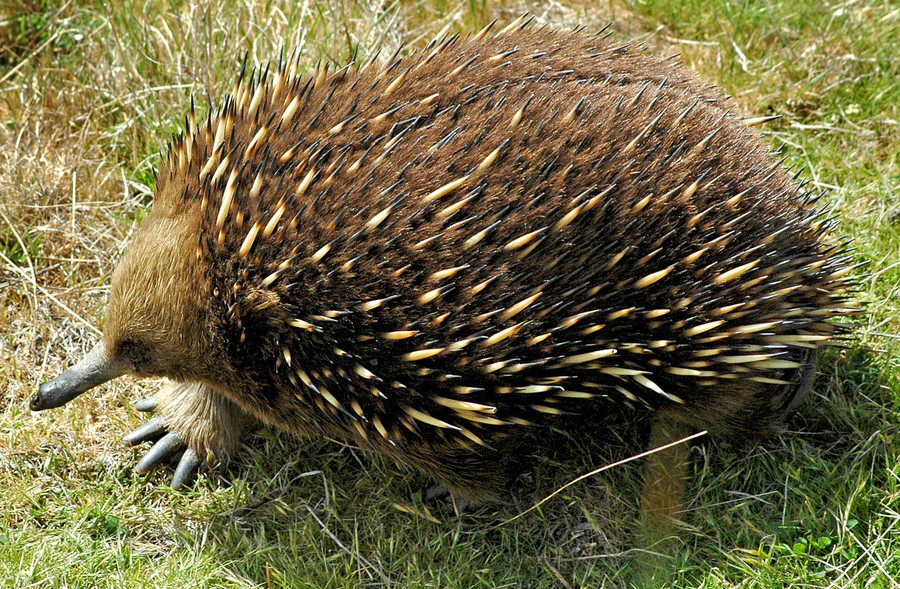 The echidna is a spiny anteater native to Australia and New Guinea.
KeresH
By Sura Jeselsohn

Reptiles and mammals differ in a significant way.

Reptiles are cold blooded, regulating their temperature based on outdoor temperature. Their skin is covered in scales, and they have a cloaca, which is a single common cavity serving the excretory, reproductive and urinary systems. Their limbs seem to be attached underneath, giving a characteristic locomotion.

And mostly they lay eggs.

Mammals are warm-blooded, and therefore require more food because of the need to maintain a constant temperature regardless of the outdoor temperatures. The excretory, reproductive and urinary systems each have separate openings and ducts so that the products of these three systems do not mix.

The limbs are attached to the sides of the bodies, giving more graceful movement. Their skin is covered in fur or hair, and they have mammary glands whose milk nourish the young, who are generally born alive.

Meet the monotremes! They are a group of mammals that have retained some reptilian characteristics. The only two animals classified as monotremes are the echidna and the platypus, who diverged between 19 and 48 million years ago, but only the echidna is quilled. The name “monotreme” recognizes the surprising presence of a cloaca, mono meaning “single,” and trema meaning “hole.”

Echidnas, or spiny anteaters, are native to Australia and New Guinea. They are named for Echidna, wife of Typhon, from Greek mythology, known as “the mother of all monsters” — maybe because she was half-woman, half-snake, which implicitly recognizes the dual nature of monotremes.

Echidnas have the reptilian cloaca, and they lay eggs. A single egg develops over seven to 10 days in a pouch, at which time a larval-like creature called a “puggle” hatches. The puggle is nourished by mother’s milk, although not in the mammalian style via nipples.

Milk is secreted by approximately 150 pores onto specialized hair follicles, which the puggle can lick. After 45 to 55 days when spines begin to develop, the puggle is moved from the pouch to a burrow where the mother will continue suckling it every few days.

After about a year, the mother will disinvite the puggle from the burrow.

Lastly, monotremes have electroreceptors, also more common in fish and amphibians. Receptor numbers of an echidna can range from 400 to 2,000, are located on the tip of the snout, and are used to locate prey. The platypus can have 40,000 receptors.

Last week we discussed porcupines, which are in the rodent order. There is one other group of spiny animals in the rodent order: Echimyidae or spiny rats. Both animals are placed in the sub-order hystricomorpha, which name comes from the Greek hystrix for porcupine, and morpha for shape, and refers to certain anatomical peculiarities of the skull.

While stiffness of spines differs among the different species of spiny rats, most have spiny hair on their backs and rumps.

They live in South and Central America, are both herbivorous and insectivorous, and live in habitats ranging from the rat-like arboreal (tree living) animals, to terrestrial species, to the more gopher-like fossorial (burrowing) animals.
I had always assumed that the word “fossil” derived from a word meaning stone, but have come to learn that it derived from the Latin fossilis, meaning “something dug up” by the early 1600s. However, by 1736, it referred solely to geological remains of plants or animals.

Finally, we come to the last group of spiny creatures, the tenrecs. From the order Afrosoricida, they have the unsurprising family name tenrecidae, and inhabit Madagascar and parts of Africa. However, it is the subfamily tenrecinae — the spiny tenrecs — which also have evolved spines. These animals are found only in Madagascar.

Tenrecs also have a cloaca. Their body temperature is unusually low for a mammal, between 75 and 95 degrees Fahrenheit, and they also hibernate. Their spines are shorter than a porcupine, equally distributed across the back, and do not have barbs.

Although spines are present at birth, they are soft and hair-like. Like the echidna, it rolls up into a ball to defend itself.

Some species of tenrecs use their spines in a novel way. “Stridulation” is the term for the sound produced by rubbing together certain body parts, and that is the mechanism that gives us the grasshopper’s summer song. Certain tenrecs have such a stridulating organ, which is a muscle controlling a patch of differentiated spines near the rump.

The sounds produced seem to be for communication within the species, and may concern feeding, foraging and other behaviors.

The Bronx Zoo has two of our five quilled animals on exhibit. A porcupine can be found in the Children’s Zoo, and tenrecs can be seen in the Madagascar exhibit.