Eight months in, Bowman is just getting started 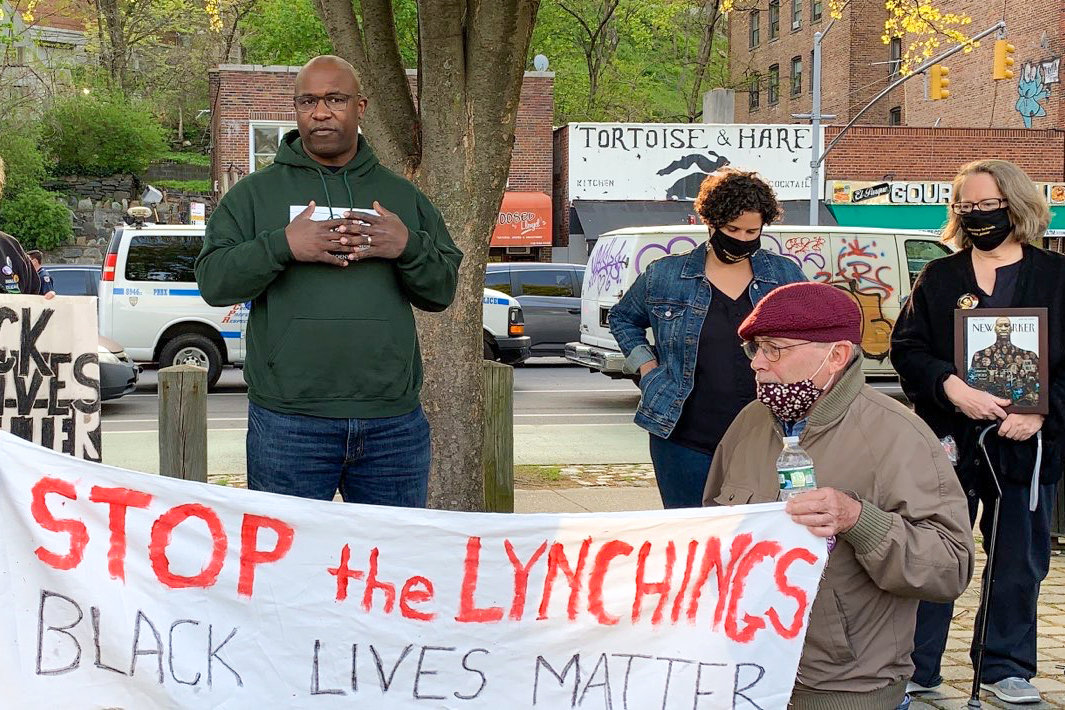 When U.S. Rep. Jamaal Bowman ran for Congress last year, he positioned himself far left of his predecessor, Eliot Engel, advocating for progressive ideas like universal health care. However, since Bowman arrived in Congress, he’s worked hard to find common ground with establishment Democrats — like House Speaker Nancy Pelosi — to get some of his progressive agenda items passed.
Courtesy of U.S. Rep. Jamaal Bowman
Reaching out

Going from being a Bronx middle school principal to walking the halls of Congress in less than a year’s time would feel like a whirlwind for most people. But Jamaal Bowman has taken this exact transition in stride.

The congressman has now served on Capitol Hill for eight months now. And so far, Bowman gives his experience in Washington a big thumbs up.

“I think the job is going well,” Bowman said. “I love it. Love my colleagues. Love the team we’ve been able to put together in our office. Just love doing work that’s important and advocating for things that matter to my district and across the country.”

While the odds were against him, Bowman found a way to overcome Engel in the Democratic primary, which all but assured his place in Congress with no significant general election opposition. In the months between the election and his swearing-in, Bowman said he didn’t really know what to expect from his new home in Washington.

“Yeah man, I don’t know if I had expectations,” Bowman said. “But I felt that we would be able to build quality relationships and get started on some good work.”

And, Bowman says, that’s exactly what he did.

Upon arriving on the Hill, he quickly lived up to his progressive campaign message by joining the so called “Squad” — a group of young progressive lawmakers that includes U.S. Reps. Alexandria Ocasio-Cortez, Ilhan Omar and Rashida Tlaib. Members of the group like Ocasio-Cortez — and Bowman himself — have often publicly criticized the decisions of more establishment representatives like House Speaker Nancy Pelosi and House Majority Leader Steny Hoyer. Mostly for not pushing for the radical changes they’d like to see.

However, Bowman says he’s still been able to build working relationships with House leadership and find common ground on issues like child care and education.

“They’re really passionate about (child care and education) and you’ve seen the fruits of that with the American Rescue Plan and some of Biden’s priorities as well,” Bowman said. “And obviously, based on my background in education, I was really pleasantly surprised to see how passionate they are about those issues.”

Rather than starting off on an adversarial note with establishment Democrats, Bowman instead reached out seeking advice and mentorship on how to get things done in Congress. And he’s worked on keeping up those relationships throughout his time on the job.

When it comes to Bowman’s Republican colleagues, however, it’s much harder to find any common ground. This is especially true, he said, for far-right-leaning figures who openly support former president Donald Trump, like Georgia’s Marjorie Taylor Greene.

“I’m blown away by the far right,” Bowman said. “Some of the things that they say, and they do — like Marjorie Taylor Greene and Fox News pundits. I’m just blown away by what seems to be an unwillingness to learn and grow and evolve. It’s just sometimes when someone says something that they don’t agree with, they attack the person as opposed to attacking the idea.”

House Republicans have voted almost unilaterally against many Democrat-sponsored pieces of legislation since the new Congress took over last January. This includes the American Rescue Plan — a massive spending bill aimed at helping the country recover from the coronavirus pandemic, which received no votes from Republicans.

But the main reason many Republicans are hard to work with, Bowman said, is because they continue to spread the false narrative that President Joe Biden did not legitimately beat Trump in 2020.

They are “just continuing to push the ‘big lie’ that the election was stolen, and voting to overturn the Electoral College,” Bowman said. “And the way that they just band together in support of Trumpism.”

For instance, nearly all Republicans voted against a Pelosi measure to establish a select committee investigating the Jan. 6 attack on Capitol Hill by a mob of Trump supporters. This followed Senate Republicans shooting down an attempt to establish a bipartisan commission in the upper chamber.

After living through the insurrection during his first week in Washington, Bowman introduced the Congressional Oversight of Unjust Policing, or COUP Act — a bill that called for an investigation into Jan. 6. So, although the current committee was formed by Pelosi, Bowman felt like he had a hand in the process.

“That’s right in alignment with what the COUP Act was calling for,” Bowman said. “Even if the act itself didn’t pass, the introduction of the legislation began the conversation. Which led to Bennie Thompson and others looking to form a bipartisan commission through legislation that was shot down by Republicans, again obstructing. And I’m just happy that the Speaker herself has shown leadership on this issue in forming her own committee.”

Not wasting any time, Bowman said he’s excited about several bills he’s introduced or plans to introduce soon. One is the Broadband Justice Act, which aims to make high-speed internet access a public utility. It also would make broadband available to 8 million federally subsidized people for free, or at a low price.

Bowman also unveiled his Green New Deal for Public Schools, a $1.4 trillion bill that aims to improve education across the country and address climate change at the same time.

“We’re looking to make huge investments in public school infrastructure,” Bowman said, “and have our public schools be a beacon of clean renewable energy for the country.”

Pushing for these large investments — whether it be in public schools, green infrastructure or affordable housing — is going to continue to be at the core of Bowman’s agenda.

“I mean, this is our New Deal moment, man,” Bowman said. “This is our chance to rebuild the country. We have to invest. We have to give people jobs. And the more we invest in everyone, the more powerful we become as a nation — both socially and economically.”