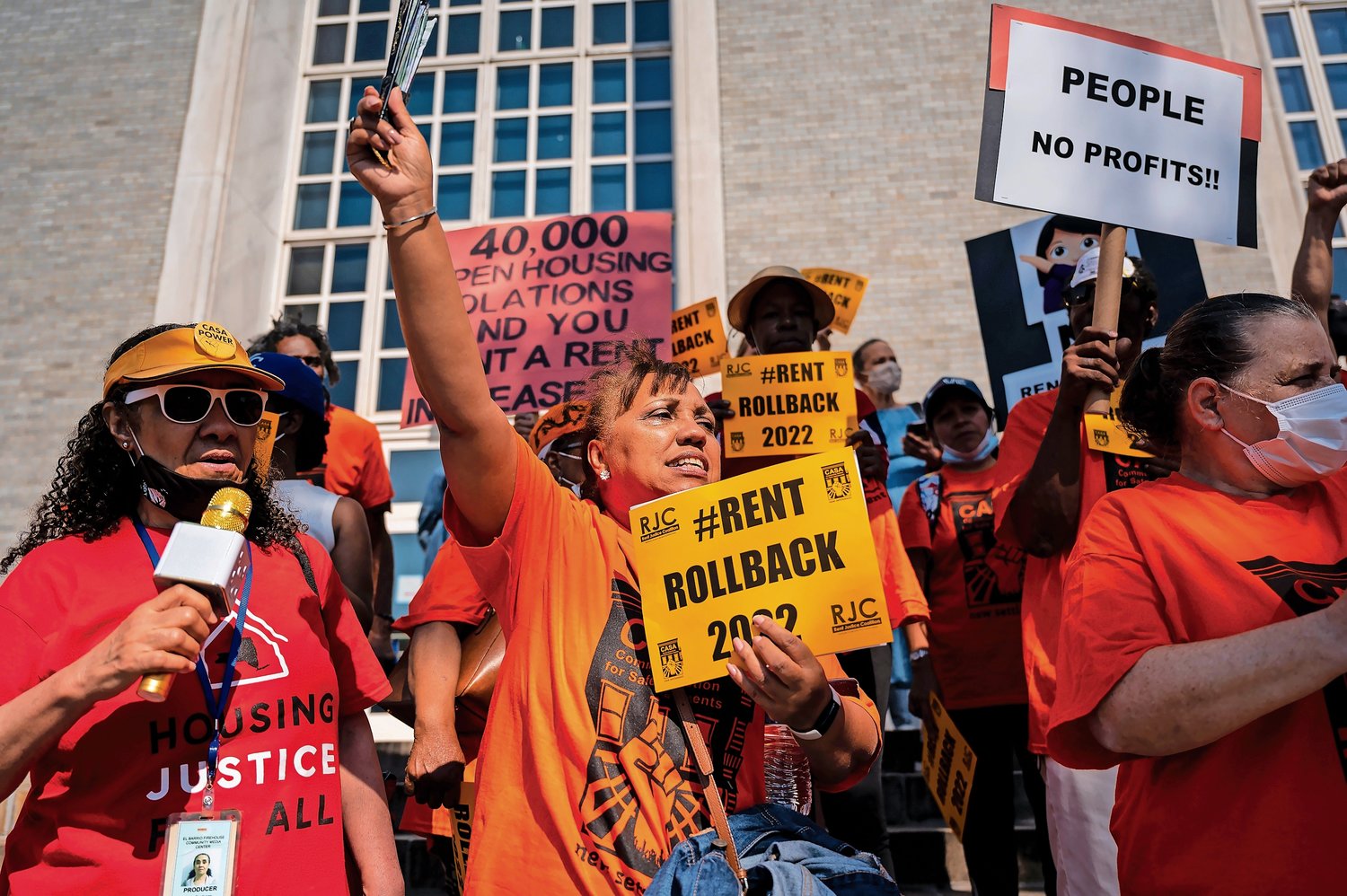 Rent regulated tenants and organizers from Community Action for Safe Apartments and Rent Justice Coalition gathered a stone's throw away from where the Rent Guidelines Board was hosting a public hearing on Wednesday, June 15.
Hiram Alejandro DurÃ¡n 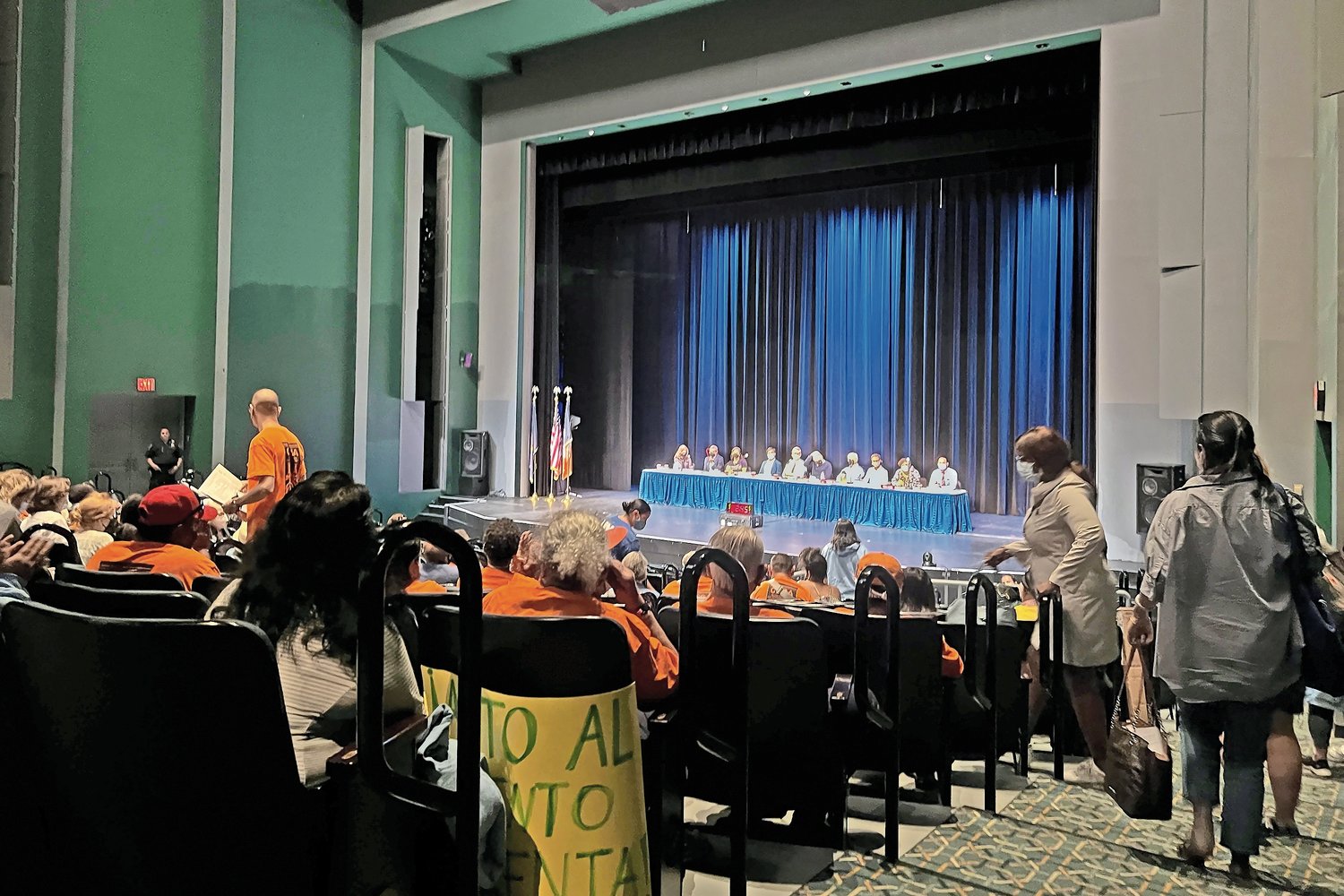 Rent-stabilized tenants will have to cut their landlords a bigger check this year after the Rent Guidelines Board decided last week to raise rents for roughly a million apartments under its control.

The final figures are within this year’s range of “commensurate” adjustments required to maintain what officials call net operating income in the regulated housing stock — one of the considerations the nine members take into account in arriving at “fair” rent increases each year.

Community Board 8 scores much lower on many of the Association for Neighborhood and Housing Development’s risk indicators than its Bronx neighbors. More than 2 percent of renters faced eviction in the greater Riverdale area, a rate expected to sharply increase this year. City housing courts do not track the rent regulation status of eviction cases, although tenant advocates point out it would be easy to do so.

Councilman Eric Dinowitz called the board’s increases a “grave misstep.” His father, Assemblyman Jeffrey Dinowitz, equally condemned it, while state Sen. Alessandra Biaggi called the board’s decision “unconscionable.” She said it would “only result in more working class, low-income and immigrant New Yorkers being displaced and pushed out of the communities they’ve called home for decades.”

In his latest newsletter to constituents, the elder Dinowitz said he was “deeply disappointed and angry” about the vote.

“These increases are horrible for New Yorkers,” he said. “And I am deeply concerned that many people will be forced from their homes because they cannot afford to pay the increase. Property owners have had their run of the show for decades, and are still earning significant profits on the backs of tenants.”

Hitting the most
marginalized

For tenants, the vote is a grim defeat, portending displacement and hardship as household budgets buckle under a 5.5 percent inflation rate in the New York metropolitan area. More than a third of renter households pay the majority of their income in rent. And meanwhile housing courts have become inundated with new eviction cases since the moratorium on such actions ended in January, compounding the backlog of cases dormant since the beginning of the coronavirus pandemic in early 2020.

Tenants rallied at the RGB’s two in-person public hearings earlier this month, calling for a rent freeze. They testified about choosing between making rent payments or putting food on the table.

At the board’s final meeting June 21 in Cooper Union’s Great Hall, deliberations could barely be heard over the boos coming from the audience.

“We’ve created a pressure cooker,” Sheila Garcia, one of two tenant members on the board, told The Riverdale Press after the meeting. “As a board, we’re basically saying that these people are best positioned to take the hit for what landlords’ profit growth should look like. We’re putting it on the most marginalized people in the city. If you think of any other business model, there’s nothing where you’re guaranteed a profit every year.”

Comfort Kumi, 71, pays $1,200 for a two-bedroom rent-stabilized apartment in a 48-unit building just off the Grand Concourse. She’s waiting for her landlord to respond to a growing list of repairs: a broken door, rusted toilet flange, a stove that stopped working. She’s solved some problems herself, or with the help of her son.

“Thank God he’s handy,” she said. “Two years, I was fighting for a fridge. They’ll tell you they ordered it. But I had to go buy a fridge myself. Last year I bought it myself.”

A rent increase of more than 3 percent means Kumi will need to scrape together another $450 or so each year in housing costs.

“They don’t care,” she said. “They just increase.”

Mayor Eric Adams appointed three new members to the Rent Guidelines Board soon after taking office this year, and industry groups weighed in with new urgency. The Community Housing and Improvement Program, which represents some 4,000 owners comprising nearly a third of the city’s rent-stabilized homes, published its own 2022 research pamphlet. Another group, the Rent Stabilization Association, offered its own testimony.

The two landlord representatives on the board echoed their points: property owners face a 20 percent rise in the cost of fuel, an 11 percent insurance hike, and another 9 percent handed over in additional maintenance costs.

“If we keep rents significantly lower than operating expenses, we are risking the decay of rent-stabilized housing,” board members Christina Smyth and Robert Ehrlich shared during a closing statement at the rental vote.

“Our own data shows us that this is starting to happen. We’re seeing less long-term capital investment in maintenance. And when you factor in mortgage payments, roughly half of the buildings with more than 80 percent rent-stabilized housing are in distress. These are the buildings outside of core Manhattan that low-income New Yorkers rely on the most.”

Owners also point to the plight of small landlords struggling to keep up with maintenance costs and mortgage payments. But an analysis of rent-stabilized properties published earlier this month on JustFix.nyc complicates the picture. It uses public records to connect rent-stabilized buildings with property portfolios, revealing that just 1 percent of such units are owned by landlords with 10 or fewer units, while 60 percent are owned by landlords with more than 1,000 units.

“When they published that one-page report, we were shocked,” Garcia said. “We didn’t expect the portion of small landlords to be so low.”

During the low-rent adjustments of the last nine years, landlords have made ample use of the remaining avenue available to increase rents on stabilized units by investing in them through major capital improvements. Thanks to this speculative practice, rent-stabilized buildings sold for as much as 40 times their annual rent revenue until this aspect of rent regulation was significantly reformed in the 2019 state Housing Stability and Tenant Protection Act.

The impacts of the housing stability act — which is only now being put to test in the courts, — has nonetheless weighed heavily on the Rent Guidelines Board this year. The law shifts the burden of ensuring landlords are generating enough revenue to maintain their buildings on the board, said chair David Reiss.

“Therefore, I believe the commensurate rent adjustments calculated by staff should play a more significant role in our deliberations than in past years,” he added.

John Montoute, an attorney with Legal Services NYC-Bronx, has closely observed landlords systematically making these major capital improvements, and the respite the 2019 legislation created for tenants.

“They would get to the neighborhood and buy old buildings,” he said. “They replace the kitchen, the bathroom, and the windows. They did one apartment line at a time, so everyone in line ‘A’ gets their kitchen and bathroom gutted. You’d get a hotplate. They changed out windows. Dust, noise.

“When you’re doing something at that scale, it affects the whole building. Then you’d get hit with (a major capital improvement) rent increase of $20 per room or so. That was their business model. Now there’s all sorts of rules about it.”

Bronx leading for all
the wrong reasons

The reforms left owners on the hook for over-leveraged properties, which are by now an indicator of displacement and gentrification in New York City. Housing advocates track such properties with tools like the Association for Neighborhood and Housing Development’s Displacement Alert Map.

Using a variety of city and state property records, the association released its latest findings last May revealing that the 10 community boards with the highest rates of eviction filings are in the Bronx.

The Bronx has the highest concentration of rent-stabilized units of any borough, and a net vacancy rate of less than 1 percent in the 2021 Housing and Vacancy Survey. The citywide rate, which must be below 5 percent to keep rent regulation in effect, is a little more than 4.5 percent.

“The COVID protections are coming to a close. Right now, all we have is” the Emergency Rental Assistance Program, Montoute said, referring to the federal program designed to help low-income tenants during the Coronavirus pandemic.

“Once you get a decision, we’ve seen them pay some arrears, but not all,” he said. “We’re seeing old cases where folks already couldn’t afford rent. Now with the RGB increases, it’s less money in the pockets of New Yorkers.”