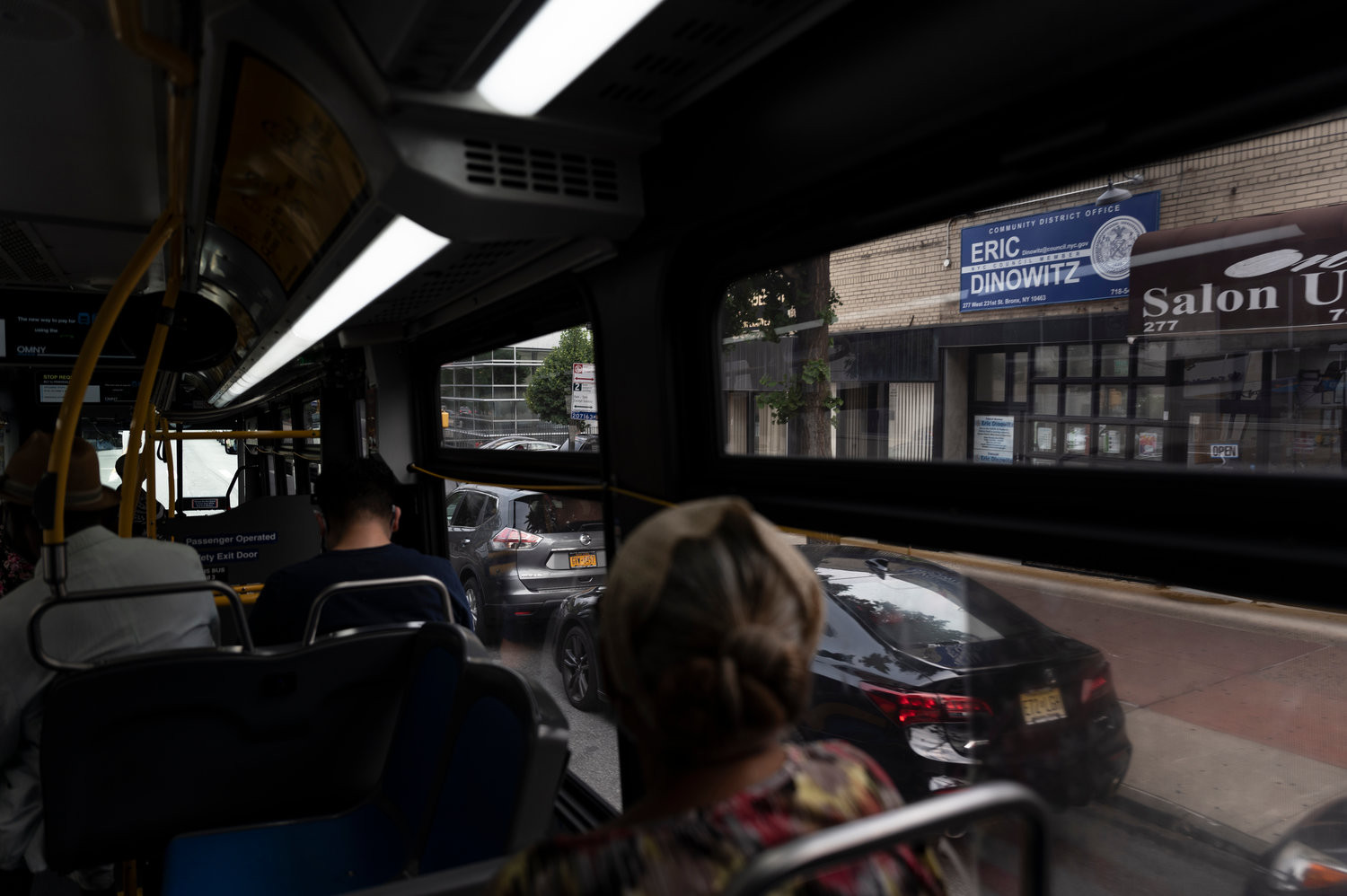 Like many electeds in the area, Councilman Eric Dinowitz has keept constituent services outside when in-person, and online otherwise. He has held outdoor office hours around the council district while his team handle cases on the phone and through email.
HIRAM ALEJANDRO DURÃN 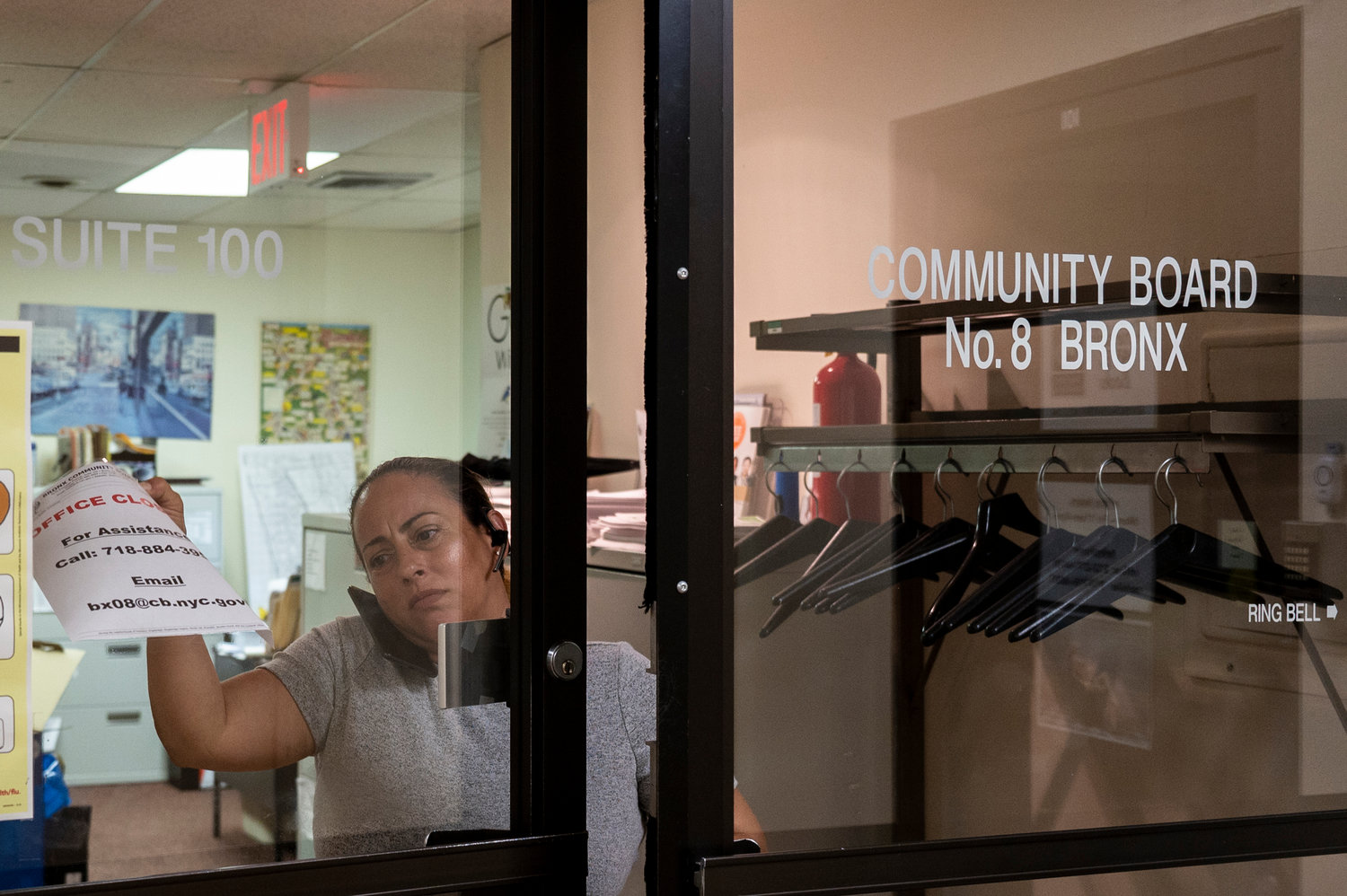 Unlike many electeds’ offices in this corner of the Bronx, Community Board 8 has had its 5676 Riverdale Ave., office open to the public for at least the past two weeks. However, many still prefer calling and emailing rather than trekking out to visit the office..
HIRAM ALEJANDRO DURÁN 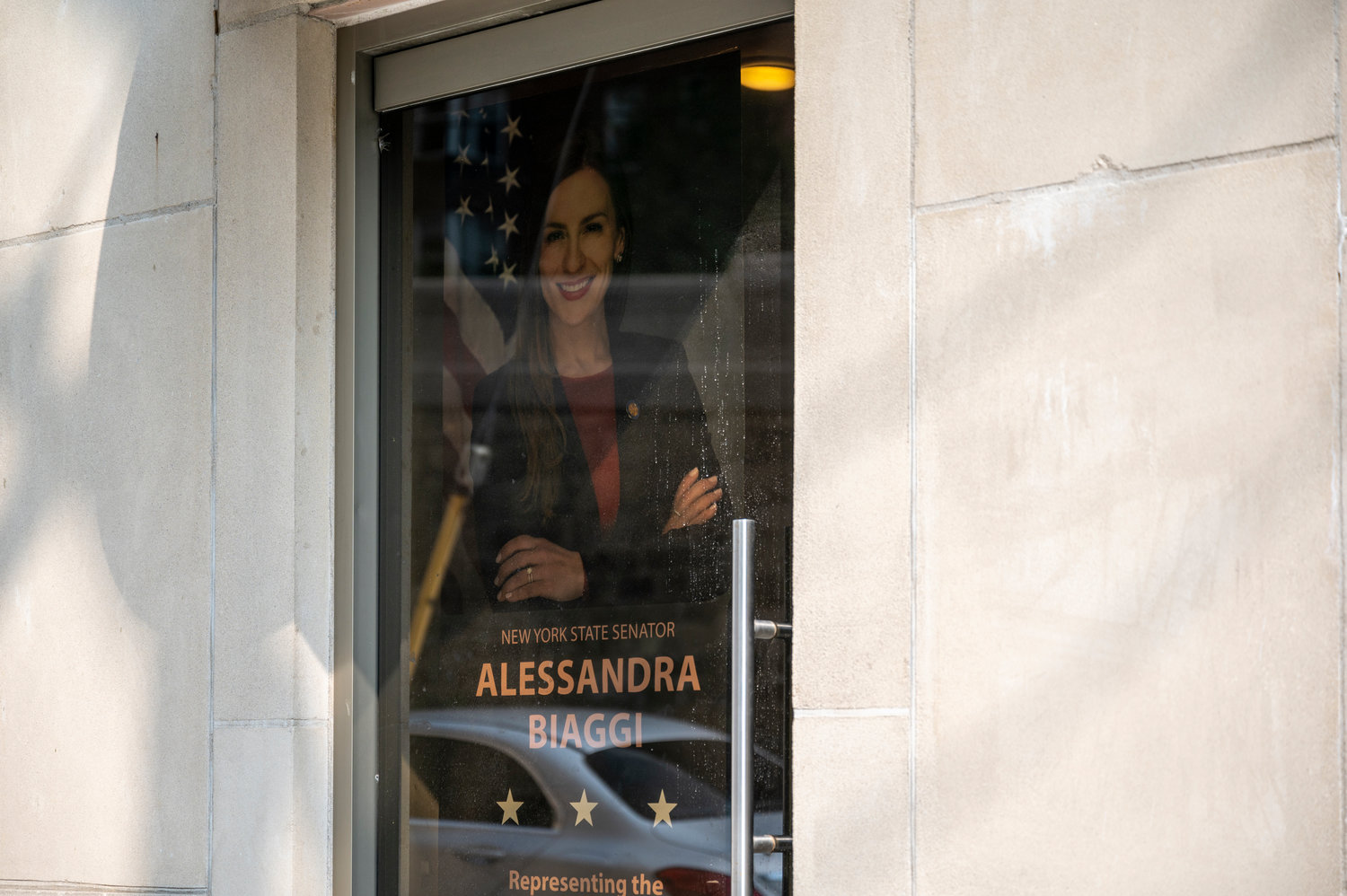 State Sen. Alessandra Biaggi’s district office at 3190 Riverdale Ave., is still closed to the public. However, Biaggi’s team has found new ways to communicate with constituents remotely and outdoors — something they hope to continue even when the office is fully open again.
HIRAM ALEJANDRO DURÁN 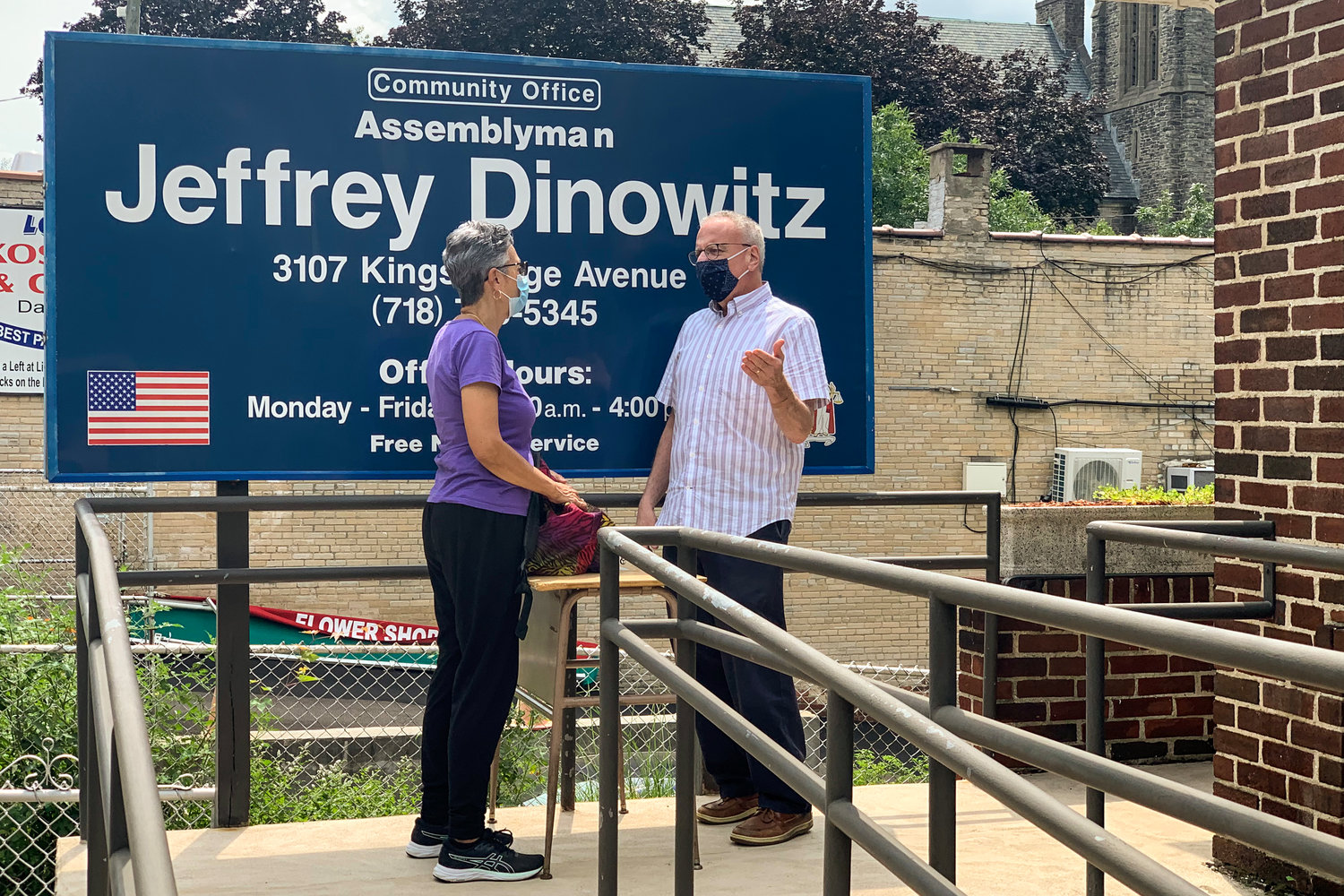 While Assemblyman Jeffrey Dinowitz would like to welcome constituents inside his office, the lawmaker and his team have maintained an outdoor set-up. When constituents are finally allowed back in, Dinowitz wants to make sure they’re fully vaccinated.
Courtesy of the Office of New Yo
Previous Next

I actually like seeing people face-to-face, and sometimes it's more conducive to solving a problem when we can talk directly.”
JEFFREY DINOWITZ
By ETHAN STARK-MILLER & MAYA MITRASINOVIC

Many restaurants and stores have lifted capacity restrictions and other pandemic precautions like mask wearing. At the same time, others are a little more hesitant, nixing some virus prevention measures while keeping others in place.

What about elected officials? One might think they would be among the first to restore full in-person constituent services after the governor’s announcement. But many — at least in this area — are either only offering services remotely, or have developed a hybrid model that involves meeting with people outdoors.

Still others are allowing people back inside offices, but with varying levels of precautions.

What’s causing this hesitancy to reopen? That would be the delta variant — the most dominant of the coronavirus’ mutant strains. The Centers for Disease Control and Prevention believes the delta variant spreads more easily and quickly than other forms of the virus. However, the CDC has also said the vaccines currently available appear to protect against this variant.

For instance, state Sen. Alessandra Biaggi’s district office has remained closed for in-person services because of the delta variant threat, spokeswoman Ana Hall said. Instead, Biaggi has provided constituent services remotely since the start of the pandemic. While they’ve been using traditional modes of communication like email and phone calls, the senator also introduced new methods.

This summer, for example, Biaggi’s team has traveled around the senate district visiting small businesses and constituents to discuss the different COVID-19 relief programs at the city, state and federal levels available to them.

“When we’re talking with people, a lot of time they don’t even realize that the problems that they’re experiencing are issues that we could help out with and fix,” Hall said. “So, we’ve actually been able to get a lot of cases from being out in the district.”

Furthermore, all constituent services representatives were given Google Voice numbers — a form of internet-based telephone service. Once someone opens a case, they would be given the number of a caseworker who they could then call or text directly.

“It’s been a way to just give people some peace of mind that they have someone that they can contact whenever they need,” Hall said. “So even though there’s not a face-to-face (meeting), just having that open line of communication has been really, really great. And that would definitely be something we’d want to keep, even once our office opens up.”

Depending on the state of the delta variant, Biaggi’s office hopes to reopen by the end of the summer.

Popping up on a corner near you

U.S. Rep. Jamaal Bowman says he, too, is holding off on restoring in-person service because of rising cases among the unvaccinated.

“We’re still monitoring the delta variant,” Bowman said. “We’ve been keeping track of that, because obviously there’s a lot of unknowns related to that. And, you know, with technology, a lot can be done remotely. So we’re still able to respond to the thousands of patrons that we have coming in per week because our office is mobile. Because we use all of our technology apparatus to meet the needs of people in the district.”

While Bowman does have physical office space in Mount Vernon and Co-op City, his staff remains mostly remote. Plans right now are to reopen offices in September — depending on how well the latest virus spikes are under control.

But the focus on remote services doesn’t mean Bowman isn’t getting facetime with people in the district. His office has had pop-up in-person services since January, he said. There they set up a physical location to speak with people in different areas.

“We’ve done a few throughout the district,” Bowman said. “We inform (constituents) via email or robo-call when those are happening. And yeah, we just pop up. We could be on a street corner near you.”

Councilman Eric Dinowitz has found success traveling outdoors as well, allowing many of his constituents to walk right up and talk to him about any issues they’re having. He’s been doing this since winning the March special election, on top of providing remote services via email and phone.

While some claimed Dinowitz hosted his mobile office hours as a way of campaigning for the June primary, these events have continued past the last ballot being cast, and have become so successful, there are plans to continue them — even once they bring back in-person services.

The councilman’s father, Assemblyman Jeffrey Dinowitz, also sees constituents outside. But instead of roaming around his district, he’s decided to see them at a table right in front of his Kingsbridge Avenue office.

“I actually like seeing people face-to-face, and sometimes it’s more conducive to solving a problem when we can talk directly with them,” Dinowitz said. “You know, email is fine — up to a point. But there’s no substitute for personal contact.”

Dinowitz also plans to keep services outdoors and remote until there’s more information about the delta variant. Furthermore, he is adamant about constituents being vaccinated if they want to come into the office once his team decides to go back to in-person. That should be no surprise considering the Assemblyman’s pro-vaccine record in general.

“The next stage after what we’re doing now — which is seeing people outside — is perhaps to allow one constituent at a given time to be in the office,” Dinowitz said. “I haven’t decided when to do that, but I will insist that anybody who’s going to come inside the office not only wear a mask, but show that they’re vaccinated.”

But Councilman Fernando Cabrera, who represents parts of Kingsbridge Heights, has taken the opposite approach. His district office was one of the first to reopen, restoring most in-person services late last year.

“Because the needs are so great,” Cabrera said. “I mean, our people in our community have been negatively impacted by COVID-19 like we have never seen (before) in our district. So, they needed that personal level of touch.”

Cabrera’s office offers all of its services in-person except for immigration support. And that’s only because CUNY runs immigration services, and it has kept them remote.

According to Cabrera, it’s very difficult to help people with issues like employment, housing and navigating misinformation over online videoconferencing apps like Zoom. Additionally, many of his constituents either don’t know how to use Zoom, or don’t have a personal computer to connect with anyway.

Community Board 8 also moved back to in-person services — just earlier this month. However, they said many have, so far, shied away from coming into its 5676 Riverdale Ave., office.

U.S. Rep. Adriano Espaillat and state Sen. Gustavo Rivera — who both represent parts of Kingsbridge and Kingsbridge Heights — are seeing constituents inside their offices, but only by appointment.

Despite their varying methods of seeing constituents over the past year, many electeds noticed a significant increase in constituent cases — especially many related to the pandemic. So, while some offices may have been closed for in-person visit, the work never stopped.

“The sheer number of cases increased a lot during the pandemic, and the types of cases have also changed,” said Hall, Biaggi’s spokeswoman. “Prior to 2020, many cases were about quality of life. Now, cases we receive are about survival — like, ‘I need a place to sleep.’ ‘I need to get food on the table.’ ‘I’ve been experiencing unemployment for months on end.’ And so it’s definitely been an all-hands-on-deck mentality.”

CLARIFICATION: All of the staff members working for Assemblyman Jeffrey Dinowitz returned to the office last fall, but were split in half on alternating days. A story in the July 29 edition did not make this clear.