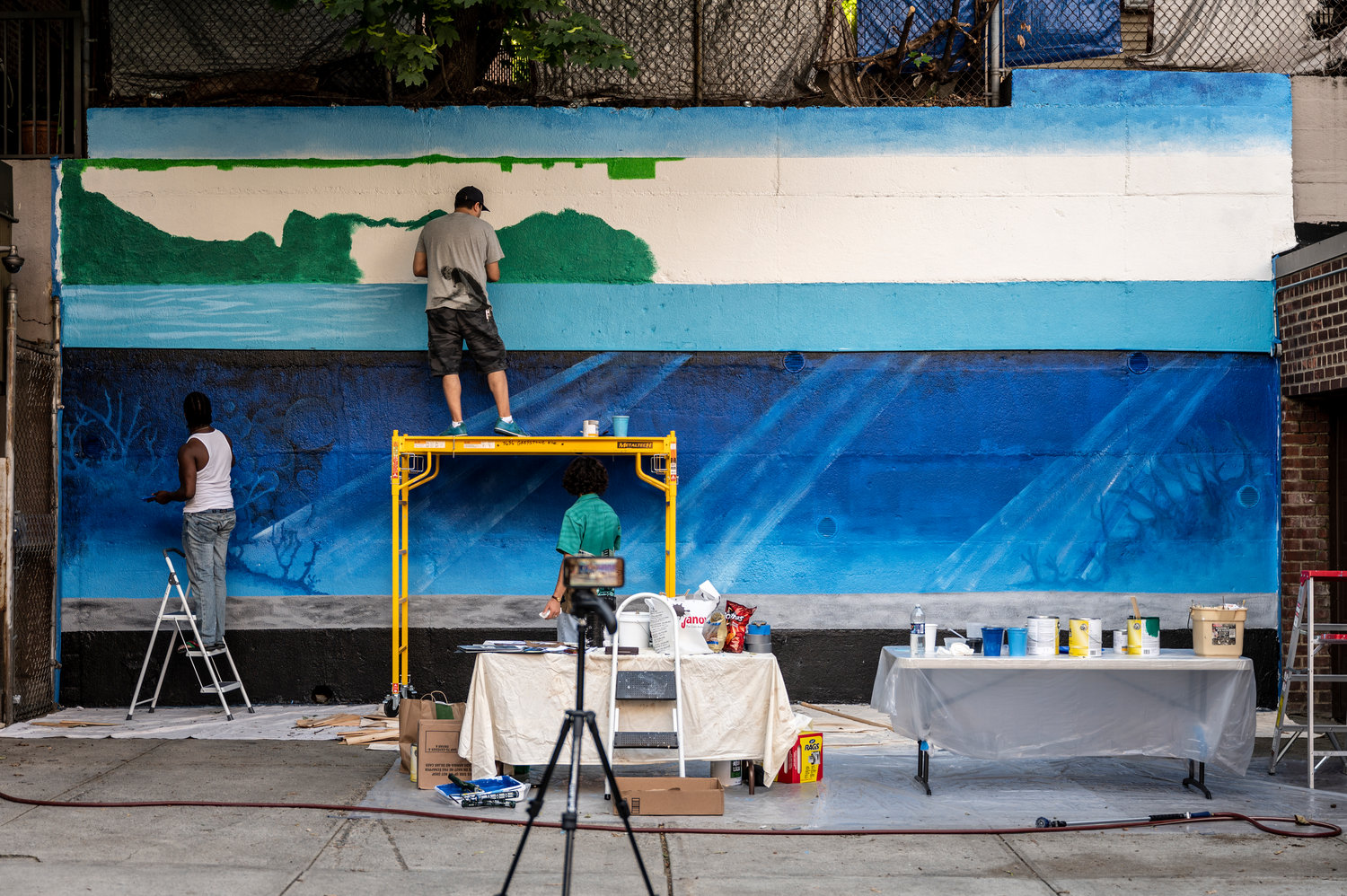 Artist Nicky Enright joins a volunteer painting a mural on the back retaining wall of 3636 Greystone Ave., where he lives. Enright was commissioned to paint this mural, ‘Aquarium,’ by his building’s co-op board because he’s no stranger to mural painting.
HIRAM ALEJANDRO DURÃN 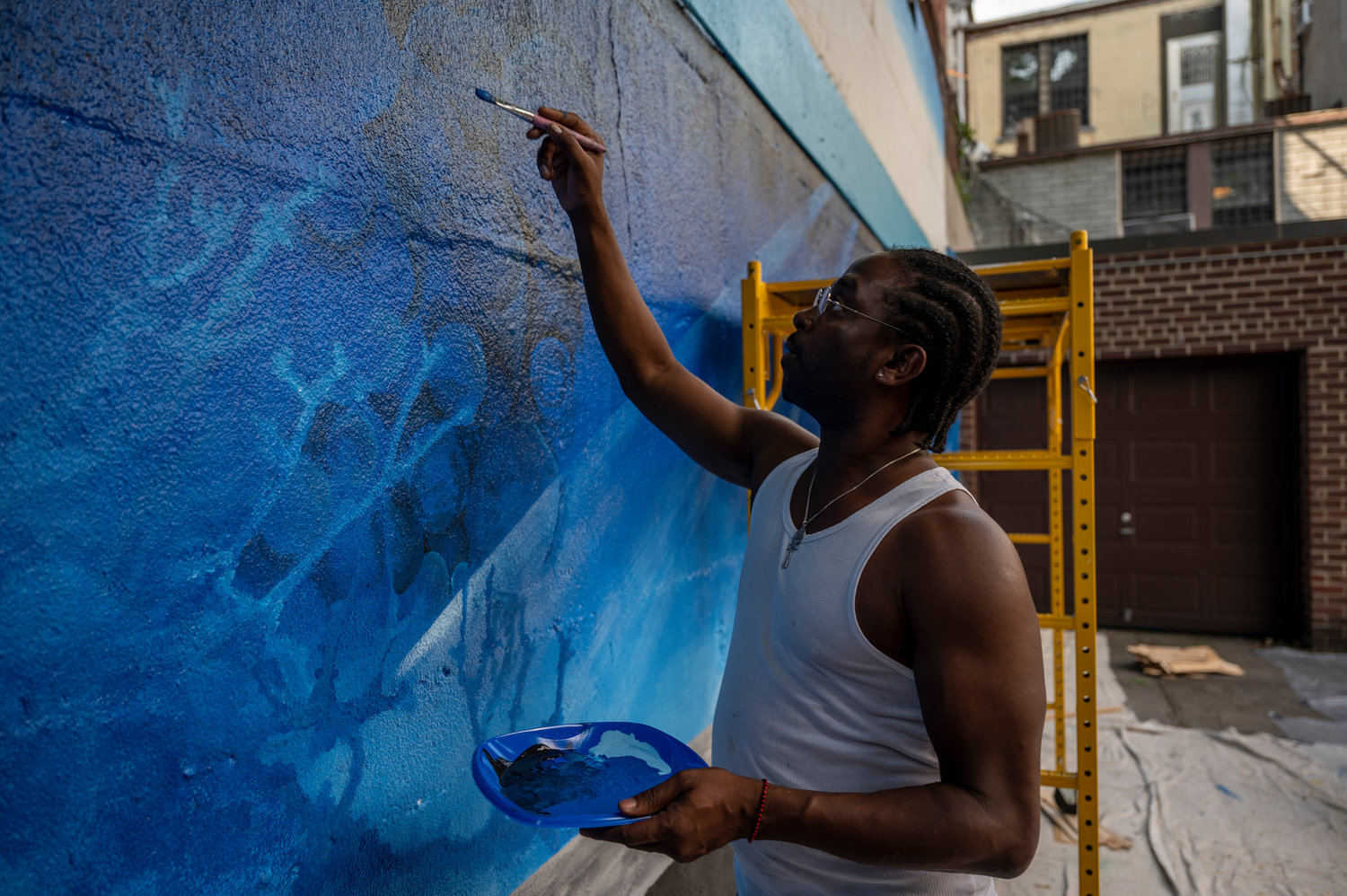 Olugbala Williams paints a mural on the back retaining wall of 3636 Greystone Ave. Nicky Enright was commissioned to paint this mural, ‘Aquarium,’ by his building’s co-op board because he’s no stranger to mural painting.
HIRAM ALEJANDRO DURÁN 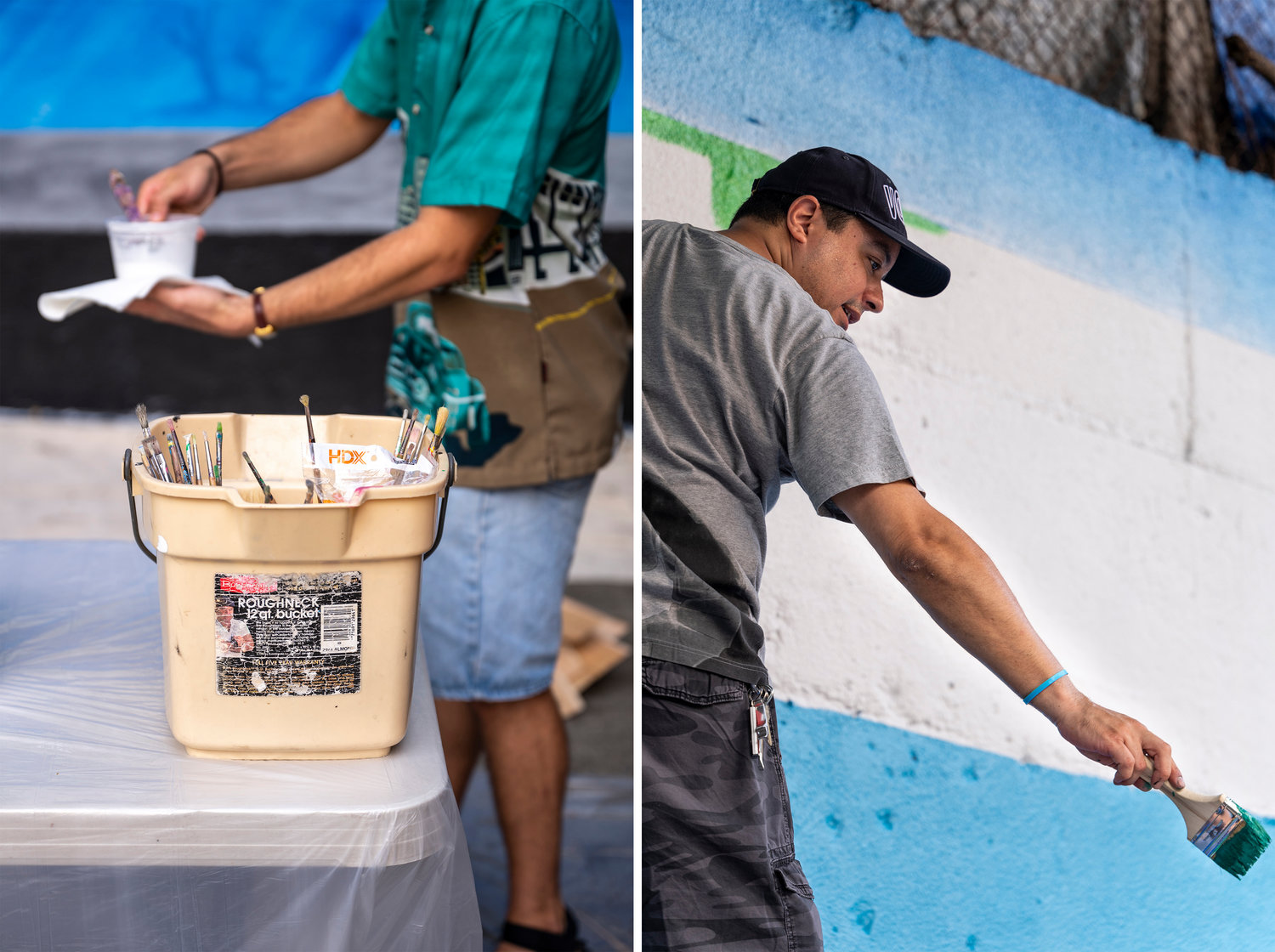 Artist Nicky Enright paints a mural depicting an aquarium under the waters of the Hudson River. The co-op board for Enright’s building — 3636 Greystone Ave. — commissioned him to paint this piece thanks to his past experience in such work.
HIRAM ALEJANDRO DURÃN/ Illustration 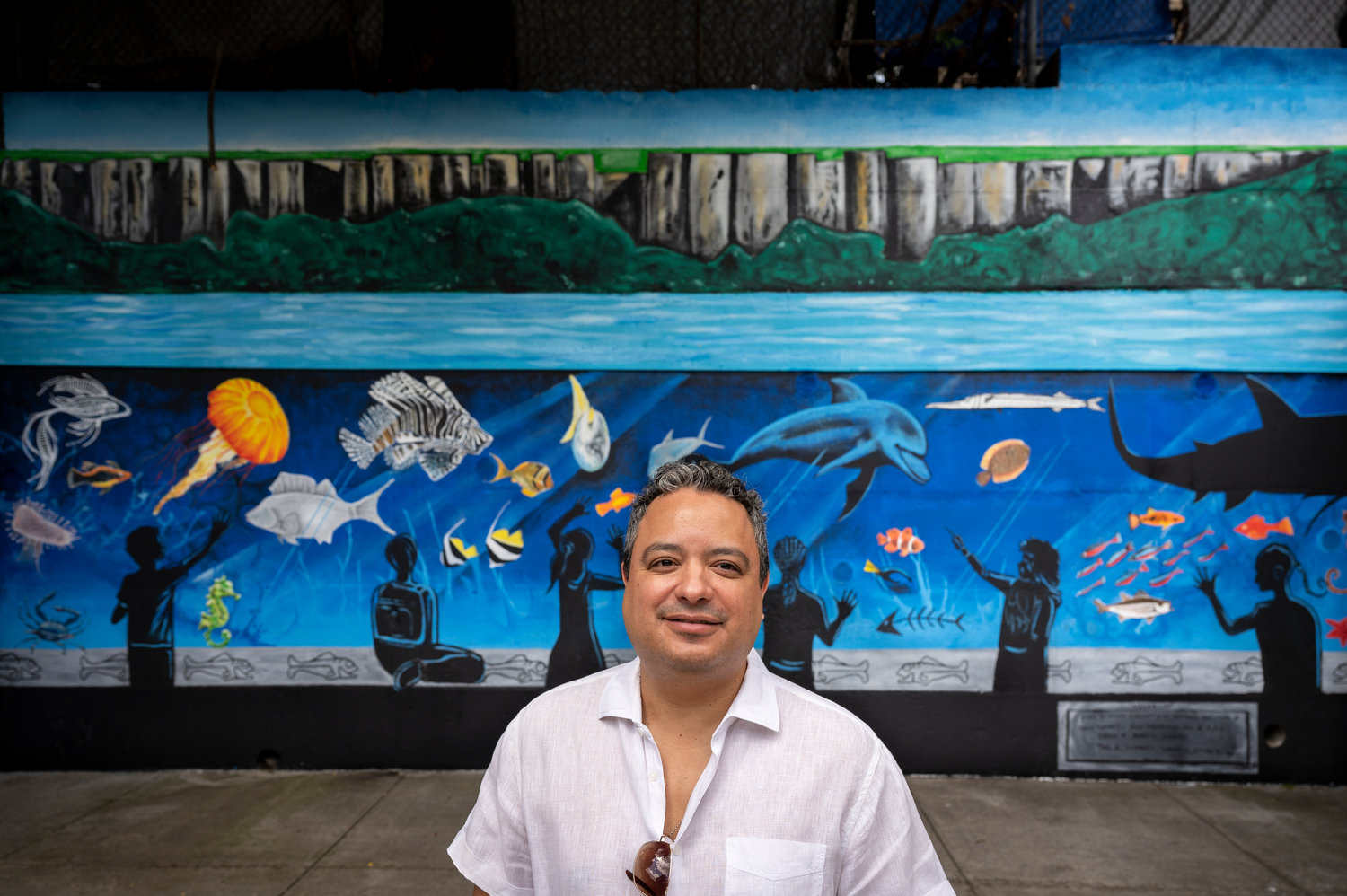 Artist Nicky Enright stands in front of his finished mural, ‘Aquarium,’ which depicts a view of the Hudson River from Riverdale with an imagined aquarium underneath. The co-op board in his building, 3636 Greystone Ave., commissioned him to do the work as part of its ongoing beatification efforts.
HIRAM ALEJANDRO DURÁN 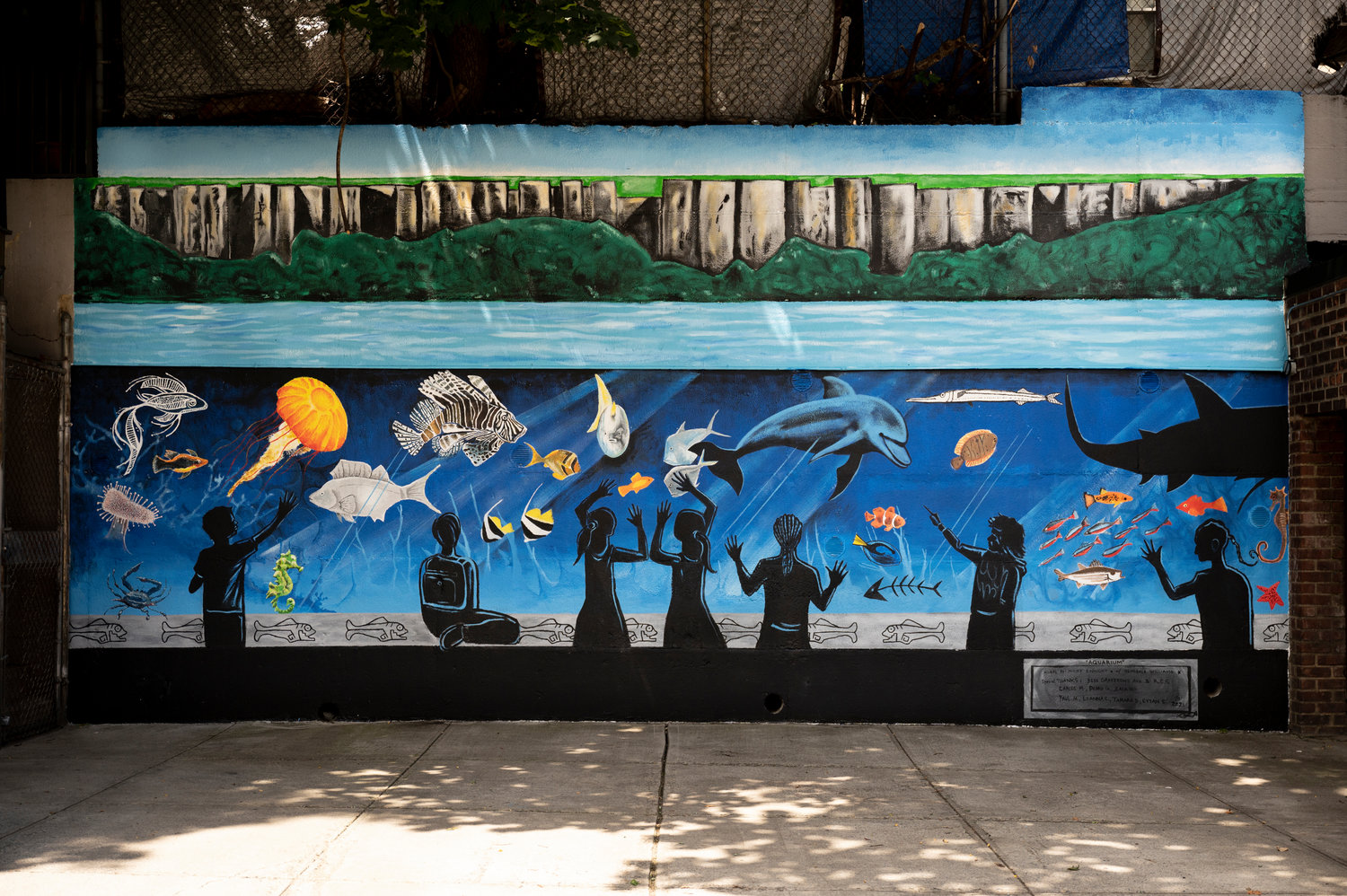 The mural ‘Aquarium’ on the back side of 3636 Greystone Ave., features a view of the Palisades and an imagined aquarium at the bottom of the Hudson River. Artist Nicky Enright was commissioned by his co-op board to paint the piece thanks to his experience in doing such works in the past.
HIRAM ALEJANDRO DURÃN
Previous Next
By ETHAN STARK-MILLER

It’s not easy to pin labels on Nicky Enright.

Over the course of the Riverdale artist’s career, he’s done video, photography — even painting. But perhaps the one thing Enright keeps coming back to is his love of creating murals.

And for him, there are numerous reasons why he continues to love slathering paint on big walls.

“They’re this collaborative project, right?” Enright said. “I mean, I do love the freedom of being an individual artist who does whatever he wants as an artist. But it’s also a cool thing to collaborate with a community, with fellow artists, with the owners of the walls. All of these people get involved. It really is a community affair.”

So, when Zack Hvizdak, a member of 3636 Greystone Ave.’s co-op board, needed someone to paint a mural on his building’s retaining wall, he knew exactly who to commission: His neighbor, Nicky Enright. The retaining wall sits in an inlet of garages behind the building, and the mural is part of an effort by Hvizdak to fix up parts of the building.

The moment Enright received the green light from the board, he threw on his apron and started work last week. He brought in fellow artist Olugbala Williams as well as some other friends and neighbors who, together, finished the job early this week.

The top half of the mural — called “Aquarium” — is a reality-based depiction of something very familiar to Enright’s neighbors: Riverdale’s view of the Hudson River. At the top, he said, the mural first depicts the sky with a view of the Palisades from Wave Hill below it. Then underneath the Palisades, onlookers see a sliver of the Hudson.

But below the river’s waters, the mural turns from a depiction of reality into fiction, Enright said. Suddenly the scene transforms into a giant aquarium with all kinds of sea life. And below that are silhouettes of children gazing upon the various kinds of fish.

“It’s kind of like mixing reality and fantasy,” Enright said. “So, it’s Riverdale geography-based, but then goes into this aquarium fantasyland where there’s even a shark and a dolphin. There are local fish as well as some other creatures one might find in an aquarium.”

The theme was no accident. Enright became fascinated by aquariums when he visited one in Switzerland with his son a few years back.

“And it was the most amazing aquarium I’ve ever been in,” Enright said. “I saw creatures I’ve never seen before. I have no idea to this day what they are. Just like crazy sea life in this crazy aquarium. And the whole thing was just amazing.

“It’s like this darkened space with these lit-up windows. These huge windows of sea life. And then silhouettes of kids looking in.”

Enright mostly grew up in Brooklyn after immigrating from Guayaquil, Ecuador, as a kid. Since an early age, art was a part of his life. He even committed himself to studying it for several years.

Enright earned his bachelor’s degree in fine arts from Cooper Union in lower Manhattan in 1996, and his master’s a little more than a decade later at CUNY’s Hunter College.

While Enright mostly focuses on his multimedia solo artwork these days, painting murals was once his main source of income. He co-founded a mural painting company in the late 1990s called Big Hands with friend Nils Folke Anderson.

Enright found massive canvases all over the five boroughs — residential buildings, schools, community centers and even the Brooklyn Children’s Museum in Crown Heights.

But he took a creative turn several years ago, focusing more on his solo art career. He moved to Riverdale, holding down a day job as an art teacher, eventually settling in at Riverdale Country School.

Enright describes his non-mural work as multimedia, but with a political bent. For instance, a recent show at the Hunter East Harlem Art Gallery called “Sense Us 2020” featured images and text on flattened shipping boxes that collectively commented on the racial and ethnic categorizations that are included on the U.S. Census.

Additionally, Enright participates in a show at Wave Hill’s Glyndor Gallery focused on the impact of the climate crisis that opens later this month. According to Wave Hill’s website, the exhibit — “Eco-Urgency: Now or Never” — aims to spread awareness of the issues stemming from climate change while encouraging viewers to fight against it.

But even with several shows at a time, Enright loves going back to painting murals because they are such an accessible artform that don’t have the typical barriers to entry of galleries and museums.

CORRECTION: Olugbala Williams, who worked with Nicky Enright on a mural at 3636 Greystone Ave., had his name misspelled in a story that appeared in the Aug. 5 edition.