Eviction freeze is nice, but some want rent freeze, too 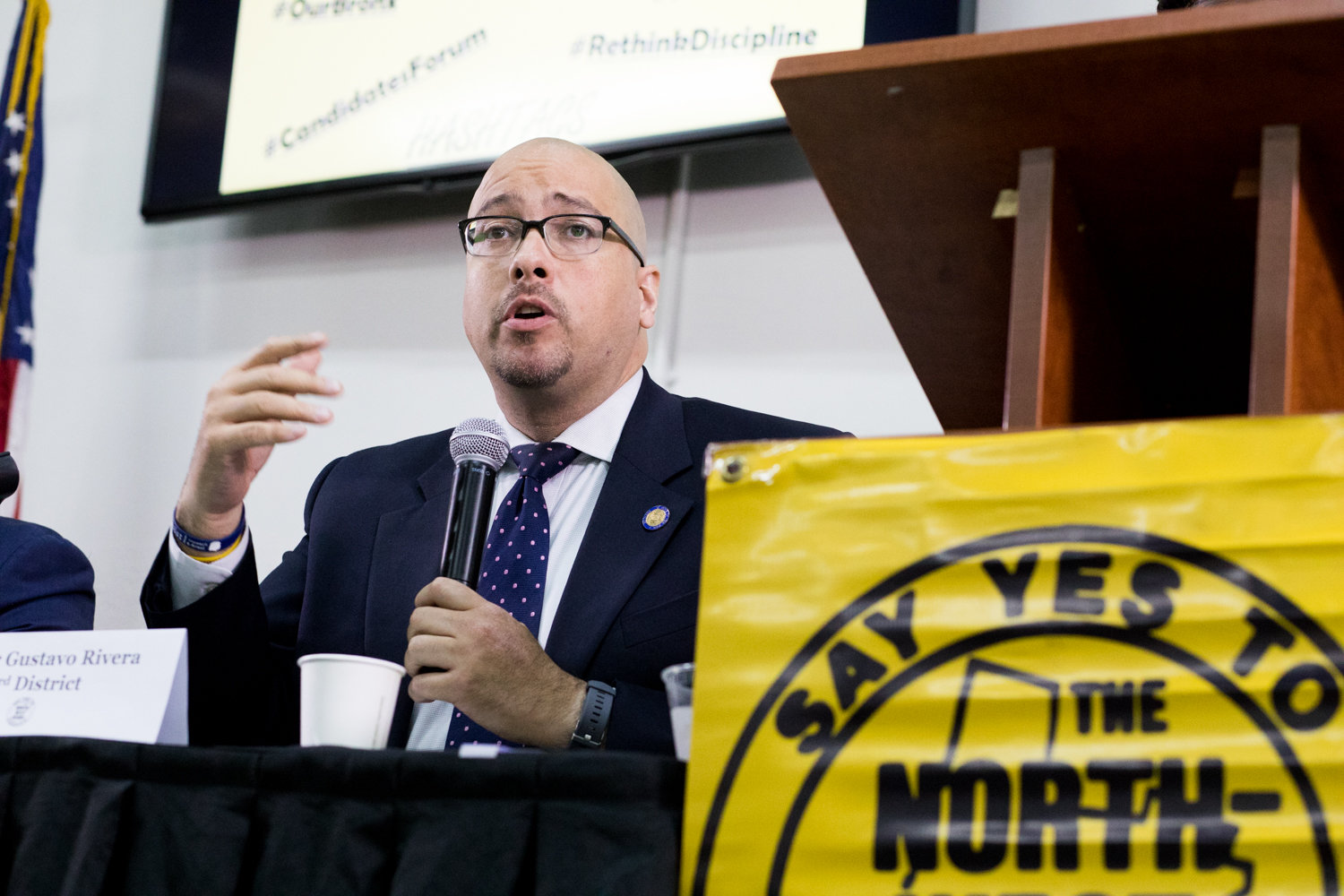 State Sen. Gustavo Rivera supports suspending rent for those unable to pay and who fear eviction at the end of a moratorium enacted by Gov. Andrew Cuomo.
JULIUS CONSTANTINE MOTAL / File 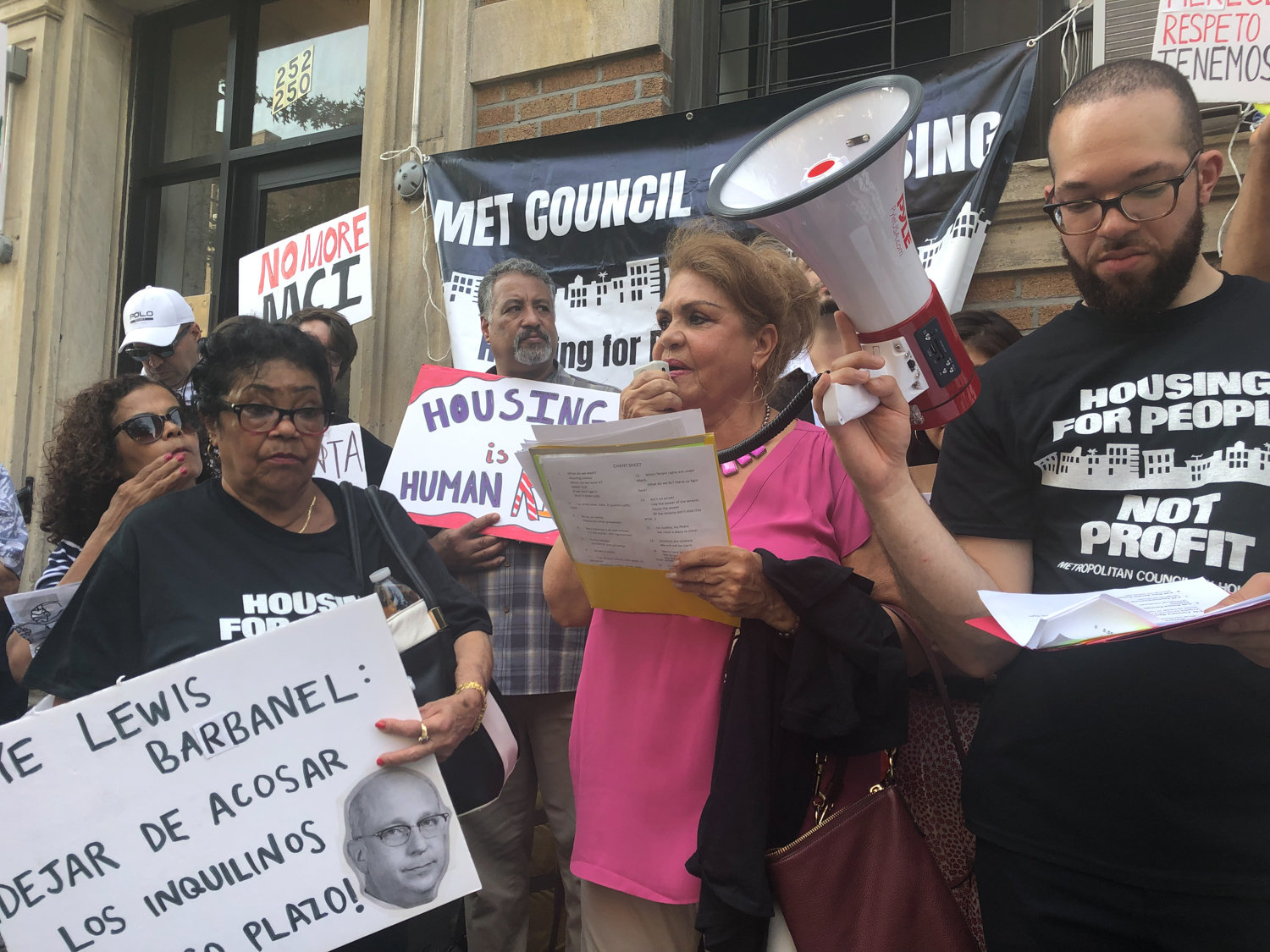 The Met Council on Housing has called for rents to be suspended through the duration of the coronavirus pandemic. While it can’t organize rallies, like the one seen here last year, they have partnered with lawmakers like state Sen. Gustavo Rivera to put pressure on Gov. Andrew Cuomo, who has only restricted evictions during the crisis.
File photo courtesy of Met Council on Housing 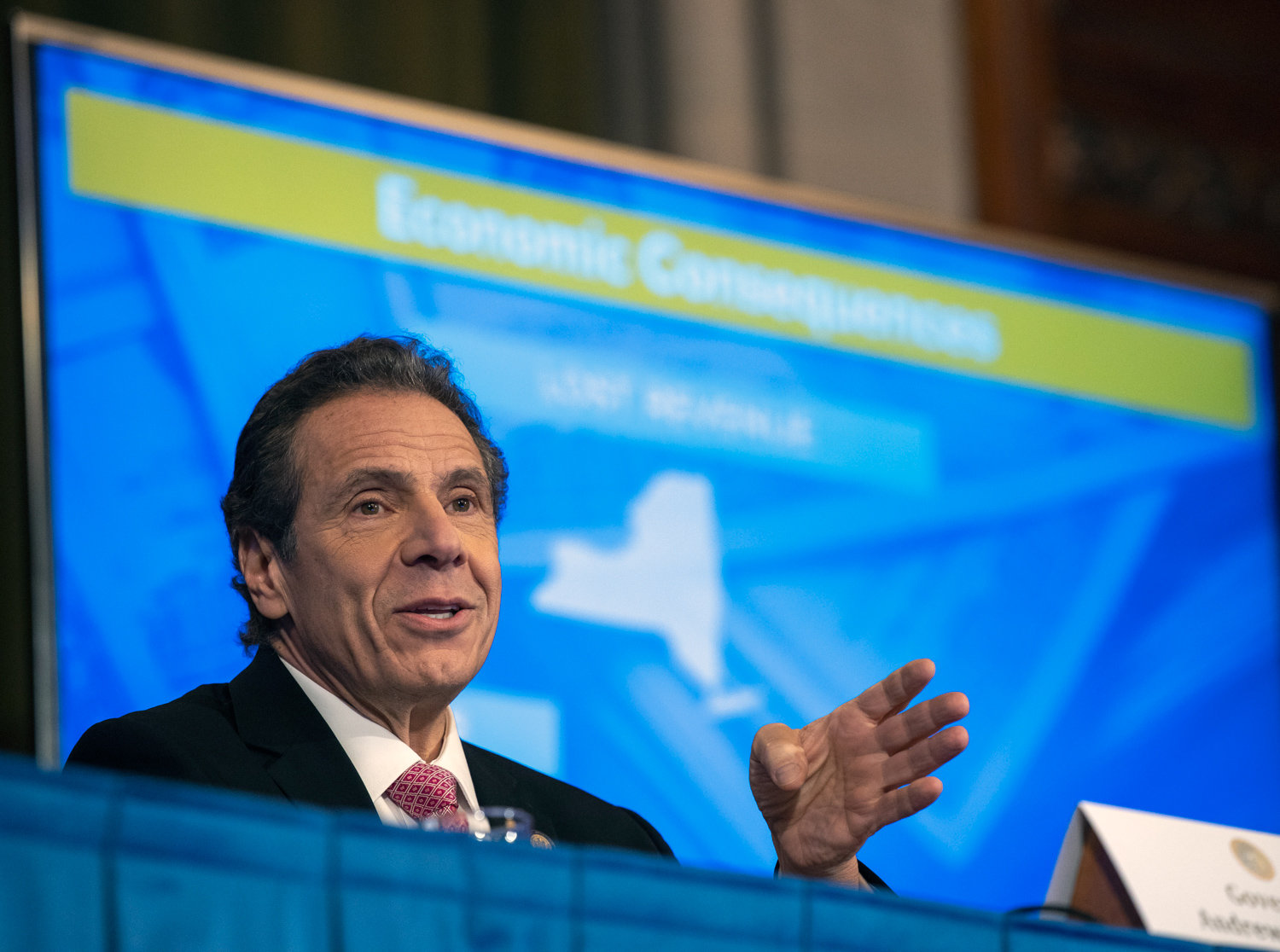 In a bid to help renters, Gov. Andrew Cuomo instituted a moratorium on evictions during the coronavirus pandemic. Yet state lawmakers and advocacy groups feel that doesn’t go far enough. Rather, leaders like state Sen. Gustavo Rivera are calling to suspend rent during the crisis.
Courtesy of Mike Groll/Office of Gov. Andrew Cuomo 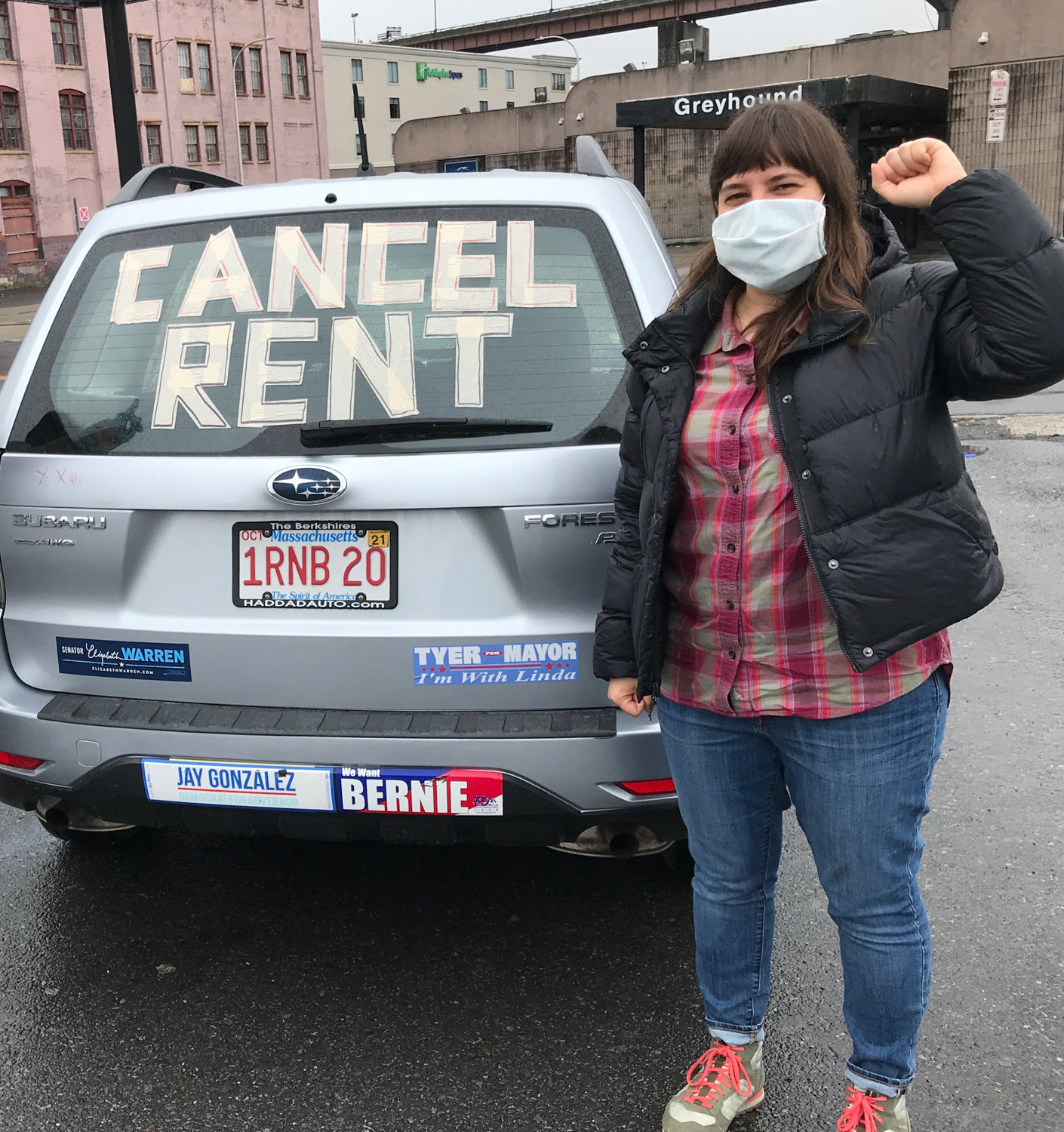 Met Council on Housing executive director Ava Farkas wants the state to suspend rent to help beleaguered tenants citywide who are unable to pay rent and who fear eviction at the end of a moratorium the governor enacted at the start of the coronavirus pandemic.
Courtesy of Met Council on Housing
Previous Next
By KIRSTYN BRENDLEN

Since before the Obama administration ended, unemployment has been so low, at below 4 percent, it seemed anyone who wanted a job could get one.

The coronavirus changed that, however, with figures jumping to more than 14 percent in April — its highest since the Great Depression. Millions are out of work, and even with financial help from the federal government, many still can’t pay bills — like rent.

Gov. Andrew Cuomo suspended a landlord’s ability to evict someone for non-payment of rent during the coronavirus crisis, but lawmakers and housing activists say that’s not enough, calling for the state to outright suspended rent for the duration of the pandemic.

“The central point for our organization, and our members, is that rent be canceled and suspended,” said Ava Farkas, executive director of the Met Council on Housing. “When I say cancel and suspend, that’s like, interchangeable. To us, it means the same thing. It means people would be free of their obligation to pay rent during the four months of this pandemic. Four months, or however long this pandemic lasts — whichever is longer.”

While no one can be kicked out of their homes for anything related to the coronavirus, once the crisis ends, there’s nothing currently in place that would prevent landlords from demanding all the months of rent they skipped, Farkas said.

Cuomo’s original executive order stopped evictions until June 20. He later extended the moratorium to August, but only on the condition tenants asking for rent relief prove they are eligible for unemployment, or have otherwise been financially impacted by the pandemic.

“I wanted to take rent off the table,” Cuomo told reporters during his Memorial Day briefing on Monday. “One less thing until August.”

The added stipulations were intended to ensure only those who were truly unable to pay their rent as a result of the pandemic and subsequent shutdown were protected from eviction, the governor said. But it also doesn’t mean more couldn’t happen in the coming weeks, since “between now and August is a lifetime,” he added.

“For us, it’s really important that there be a solution that’s universal, that doesn’t place a burden on individual tenants, to have to seek, to have to apply for a voucher, or for this funding,” Farkas said. “We don’t want there to be hoops that people have to jump through, that are complicated for people for tons of reasons.”

Looking through the eyes of tenants

Renters are home tending to sick family members, Farkas said, or trying to homeschool their children through the end of the year. Immigrants, who may not speak English as a first language, might also struggle with applications and paperwork.

“We really want the solution to be universal, to apply to everyone. We want the burden to be on landlords,” Farkas said. “So we think landlords should be the ones having to apply for funds if they’re facing hardship, not tenants.”

State Sen. Gustavo Rivera, who represents parts of the Bronx including Kingsbridge and Kingsbridge Heights, has advocated for rent suspension, supporting organizations like the Northwest Bronx Community and Clergy Coalition and Citizen Action in calls to cancel rent.

The city is preparing for a “disastrous” next few months, according to Rivera, focused mostly on health care.

“The idea that we should ‘go back to normal’ is one that I reject outright,” he said. “Normal means going back to the way things were before the coronavirus.”

That would mean going back to a place where people struggle with inadequate health care and unstable housing.

State legislatures haven’t been formally in session since March, drawing criticism from senators including Rivera and state Sen. Alessandra Biaggi.

“There’s an urgent need for the legislature to go back to session,” Farkas said. “Andrea Stewart-Cousins and Carl Heastie should be calling and the senate and Assembly back. There’s so much work to be done, it’s totally obscene that they’re not in session right now. The governor is having these daily press briefings, he’s clearly not hearing the needs of many New Yorkers.”

Lawmakers have since announced they’ll return to Albany this week, although Cuomo warned there’s no money available for them to work with, since there’s a gaping hole in the current budget worth billions of dollars. The governor had hopes he could convince President Trump to provide some federal relief for those budget shortfalls in a plan visit to the White House on Wednesday.

Biaggi worries not only about renters, but also small business owners.

“While I appreciate the governor’s extension of the eviction moratorium, it is only a Band-Aid solution that does not go far enough,” she said. “Without systemic relief, at the end of the moratorium, thousands of families and businesses unable to make ends meet will still be at great risk of eviction.”

During his own briefing heading into the Memorial Day weekend, Mayor Bill de Blasio said he would like the eviction moratorium extended, but cautioned that landlords have their own expenses to think about if rents were canceled.

“If someone owns a building, they have expenses too,” de Blasio said. “They ultimately have to be made whole in some form or fashion.”

Farkas still believes a rent suspension should go on as long as the crisis continues, especially a shutdown affecting tens of thousands of people without jobs as businesses slowly reopen.

“We see this as a crisis that’s going to be lasting for quite a while,” she said. “Renters really need to be freed of their obligation to pay rent that was already too expensive in New York City, (and) already taking up too much of people’s paychecks.”