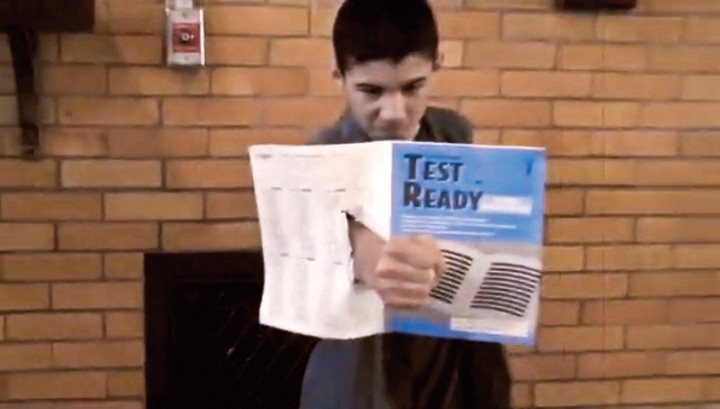 If you give an eighth-grader a video camera, he’ll probably film a flick about the horrors of the English Language Arts exam.

When a handful of students at Sheila Mencher Van Cortlandt School, PS/MS 95, premiered a horror short at the school’s annual art festival, it involved little blue test booklets rising up off desks and fluttering around classrooms, smothering and smiting students and teachers alike.

From the very beginning, “The Tests that Ate the Bronx” had the audience laughing.

The movie opened with a narrator speaking over a soaring choral melody.

“Starting in 1998, the ELA wreaked havoc on the lives and souls of children within the majestic state of New York. But that wasn’t good enough. In our present day, corporate cartels and politicians felt compelled to take over the ELA and toy with the fragile balance of education and nature. They mutated the test beyond any mad scientist’s evil imagination to make it more complex, nerve racking and deadly, all in the name of Common Core standards. But they never thought it would come to this,” the narrator said, as the music evolved into a series of shrieking industrial noises.

Felix, played by Felix Caraballo, arrives late to class during the state English Language Arts exam. After a brief rebuke from the test administrator, played by PS/MS 95 teacher Nicholas Merchant, Felix finds himself stuck next to Noah, played by Noah Veliz, who is sharpening his pencil with a knife and muttering about an apocalyptic war with tests.

Felix dismisses his classmate’s talk as fantasy and attempts to concentrate on what his teacher is saying over the murmurs of others trying to cheat.

Suddenly, the booklet the test monitor is reading from wiggles in his palm. It leaps onto his face, shoving him to the ground, where he rolls around and crawls out the door as children point and laugh.

Their giggling stops as soon as the tests turn on the students. In classroom after classroom, students and teachers fall victim to the booklets.

Leslie, played by Diamond Staten, runs to warn an administrator, who ignores her and winds up heaving his last breaths underneath his desk.