No excuse for Bronx to be at bottom of health rankings 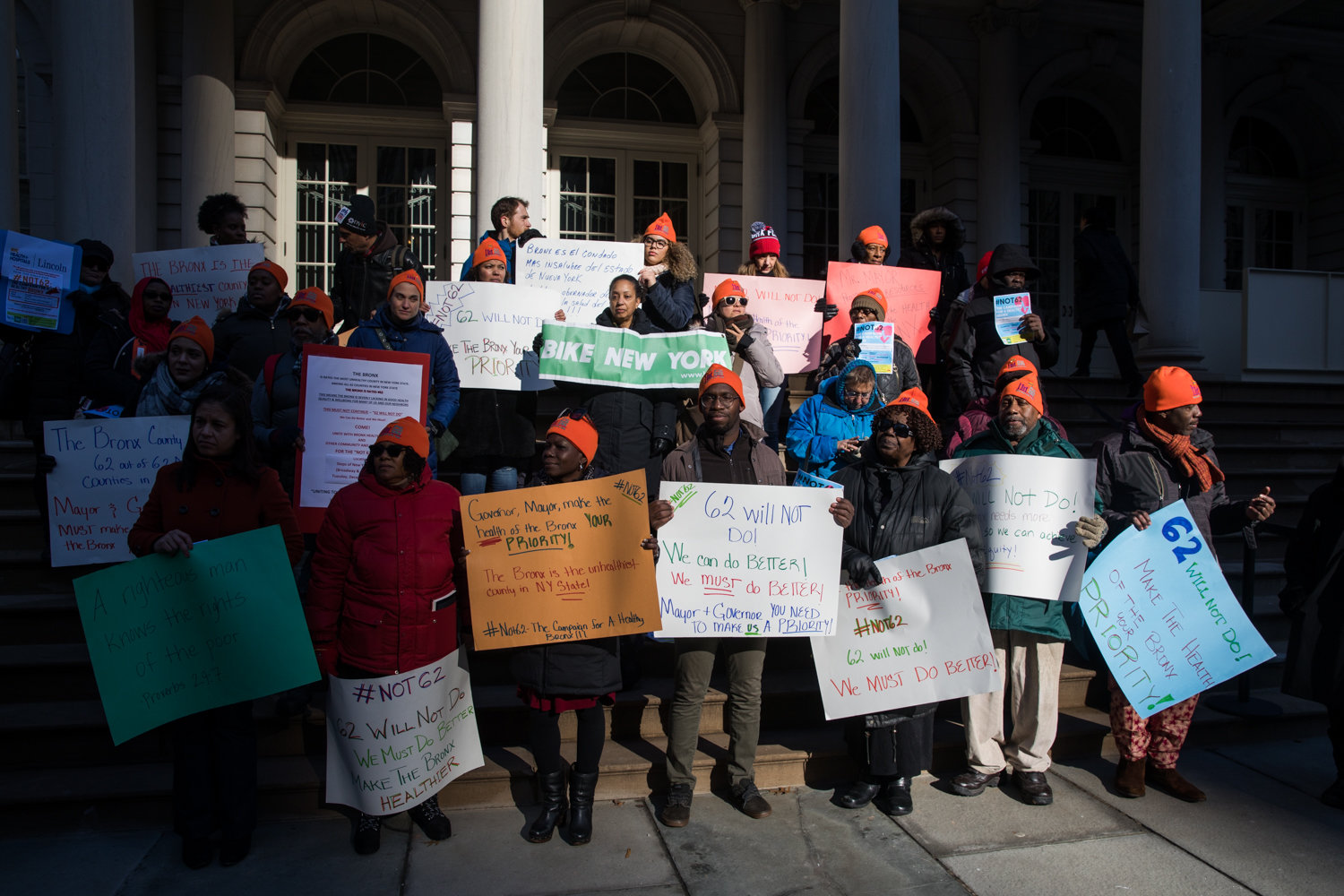 Members of Bronx Health Reach and other advocacy groups hold a rally on the steps of city hall as part of Not 62 earlier this month. For the second year in a row, the Bronx came last out of all the counties statewide when it comes to health.
JULIUS CONSTANTINE MOTAL 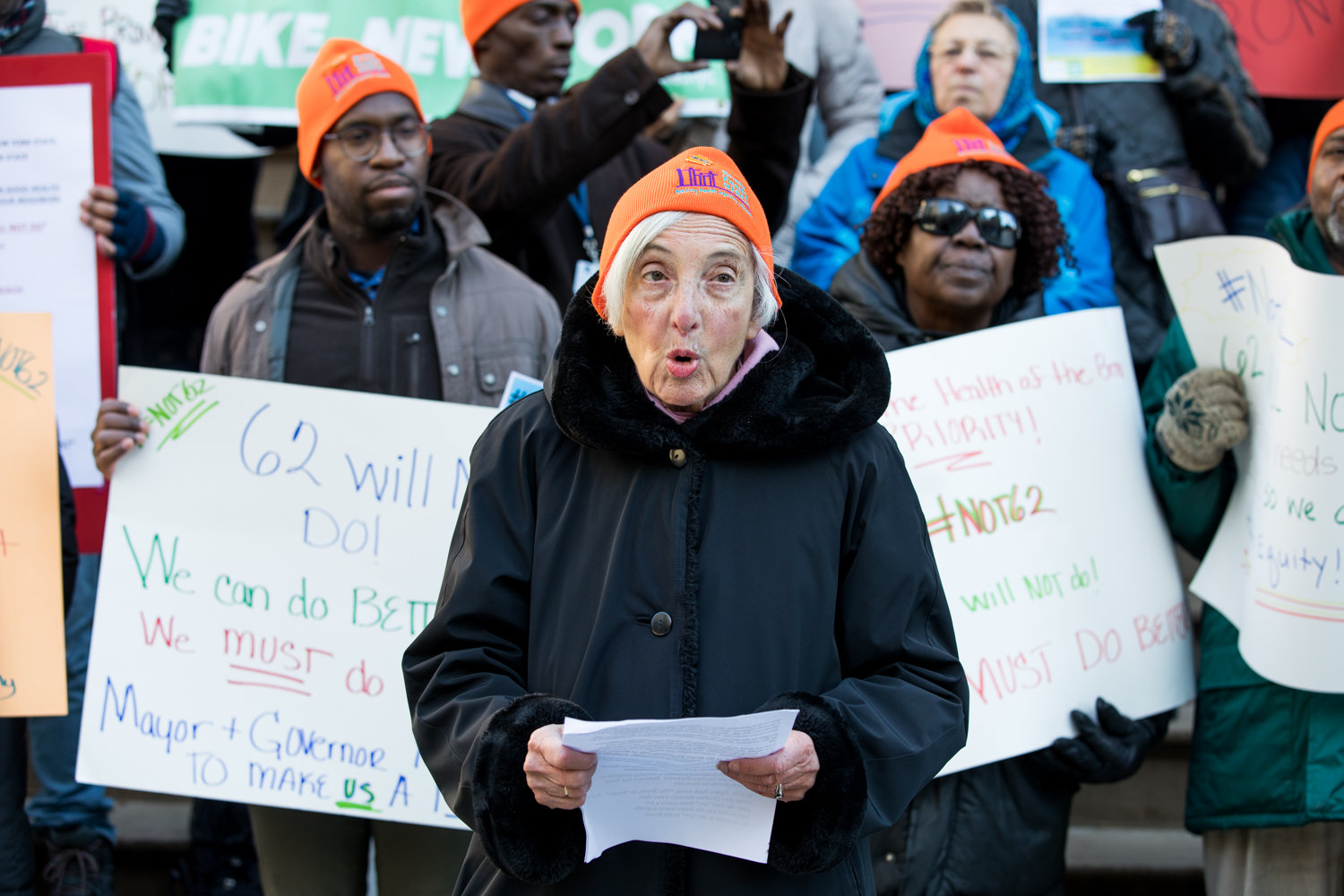 Campaign for New York Health volunteer Barbara Estrin speaks at a rally as part of Not 62 on Dec. 3. Bronx Health Reach and members of other advocacy groups came together to call for better conditions for the borough to encourage better health.
JULIUS CONSTANTINE MOTAL 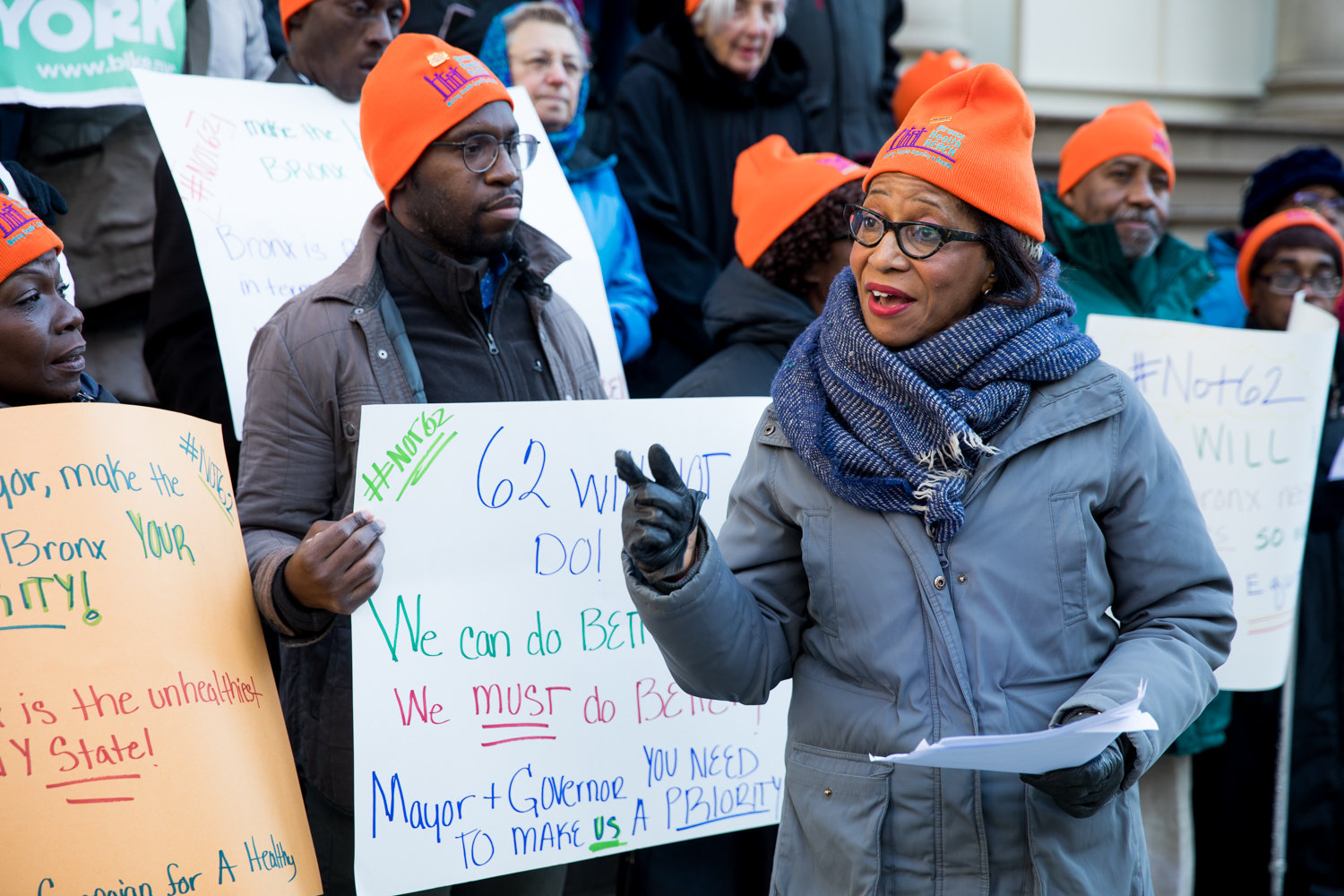 Bronx Health Reach project director Charmaine Ruddock speaks at the start of rally as part of Not 62 on Dec. 3. The rally’s name refers to Bronx County’s ranking among New York’s 62 counties when it comes to health in the state. .
JULIUS CONSTANTINE MOTAL 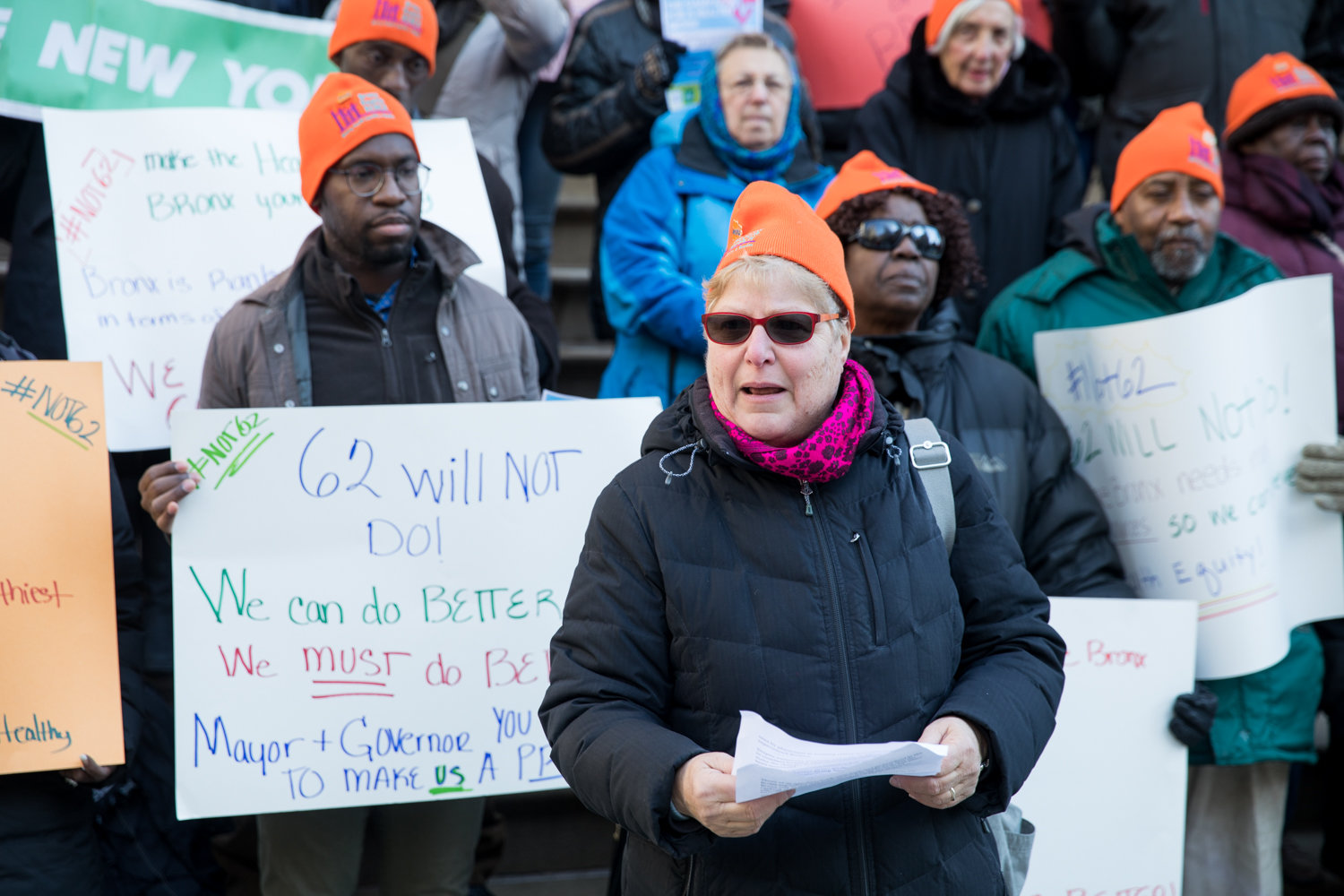 Maxine Golub, senior vice president of planning and development at The Institute for Family Health, speaks at a rally Dec. 3 designed to pull Bronx County out of dead last among the state’s healthiest counties.
JULIUS CONSTANTINE MOTAL 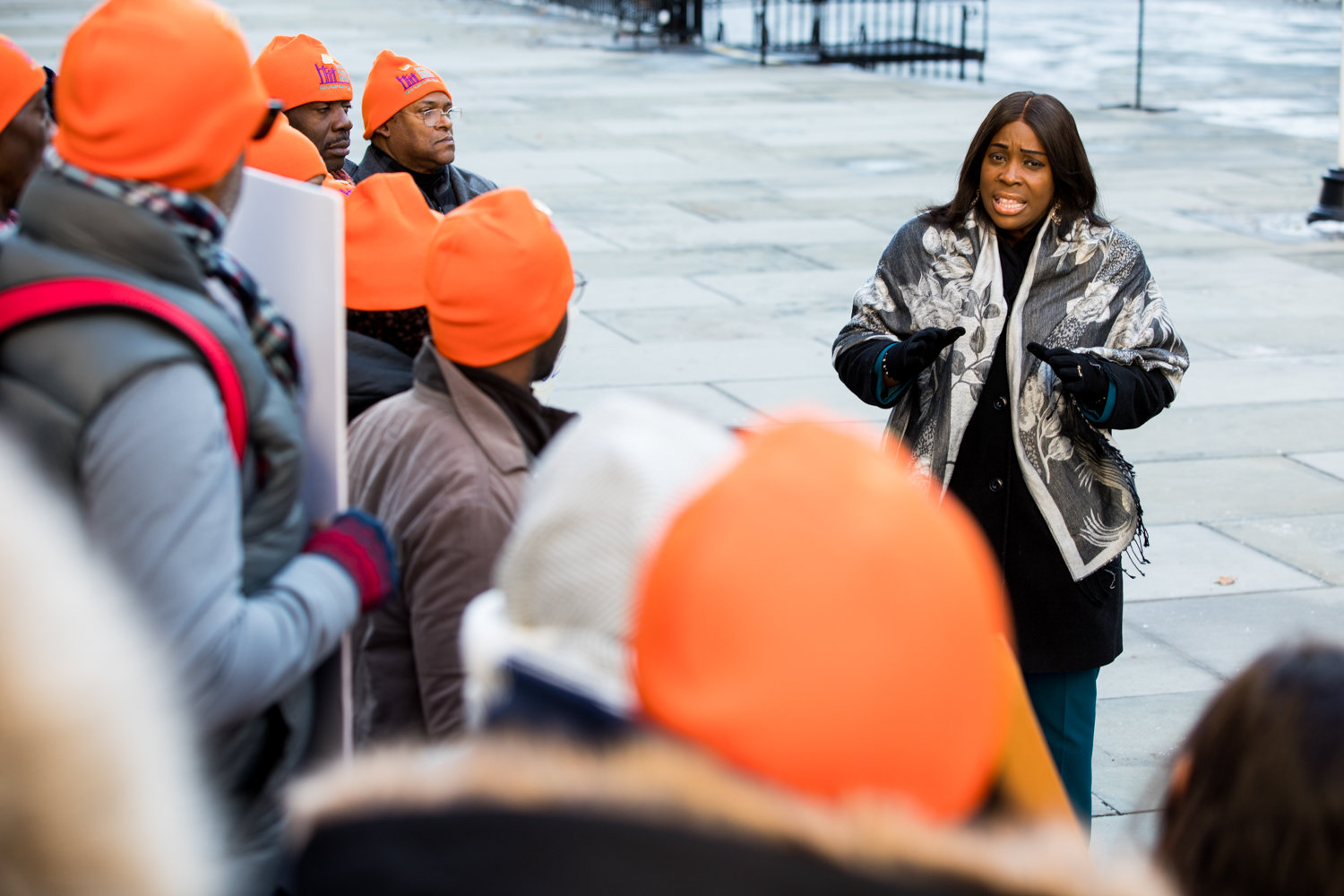 Councilwoman Vanessa Gibson, who represents an area that includes Concourse Village and Morris Heights, affirms her commitment to fight for a healthier Bronx during a rally on the steps of city hall Dec. 3.
JULIUS CONSTANTINE MOTAL
Previous Next
By HEATHER J. SMITH

Another year, the same problem.

That’s why Barbara Estrin and many others braved the early December cold to rally on city hall’s steps on Dec. 3. It was the second time members of Not 62: The Campaign for a Healthy Bronx, have spoken out for better health care in the borough.

Members like Estrin weren’t asking for anything outlandish or unrealistic from the city. Instead, they asked that the Bronx have what the other four boroughs have — equitable health care.

Each year, the University of Wisconsin and the Robert Wood Johnson Foundation ranks the country’s more than 3,000 counties based on how healthy their populations are. It studies how factors like length and quality of life, health behaviors, clinical care, social and economic factors, and physical environment have profound effects depending on geography.

Bronx County — as it has since the study began in 2010 — ranked dead last out of New York’s 62 counties.

Affordable housing, good schools, well-paying jobs, parks, grocery stores, community support services — all of these promote wellness, physical activity and stability, according to the report. These factors are in short supply or wholly unavailable to many in the Bronx.

Lack of affordable housing means more people must choose between maintaining a home and going to the doctor or eating healthy. Without adequate nutrition and physical activity, people develop illnesses, which they then can’t afford to treat, according to the report.

“These are things that we’re trying to get the mayor, the borough president, and the city council to pay attention to in the Bronx,” Estrin said. “While other boroughs in New York City have improved, the Bronx has remained at the bottom.”

Many low-income people — both with and without insurance — return to a hospital’s emergency room shortly after being released from a hospital as part of a “bounce back” effect, Estrin said.

She’s heard from several doctors who say they’ve treated many people who return to the ER sicker because they couldn’t afford generic prescription drugs.

This is the second year Bronx Health Reach rallied under the “Not 62” banner. Last year was meant to spur conversation among city and elected officials on strategies to improve the Bronx’ standing.

“If you look at this year’s rankings, Manhattan went from ranking No. 7 to fifth,” Bronx Health Reach spokesman Michael Johnson said.

In fact, all but the Bronx improved in the 2019 ranking. Queens jumped three spots to eighth, Brooklyn went from 24th to 17th, and Staten Island jumped four spots to rank 28th.

“So you think like, OK, so the five boroughs should probably be kind of close to each other,” Johnson said. “But the Bronx keeps falling into last place while everyone else in the city is getting better.”

But the improved rankings for all other boroughs hasn’t carried over into the northernmost part of the city, Bronx Health Reach project manager Charmaine Ruddock said. Educational outreach can only do so much to foster healthy behaviors like nutrition and exercise.

After more than a year of promising to sit down with the organization, Mayor Bill de Blasio finally met with Ruddock and others with Bronx Health Reach last month.

“I am happy to say that … this meeting had a serious and substantive tone to it,” Ruddock said. “We talked to the mayor about the work that we have done focused on increasing access to healthy food and opportunities for physical activity.”

They also talked about the grassroots work the organization does focusing on health and its relation to stable and safe housing and economic opportunity, she said.

How city officials go about addressing health inequality is the realm of government, Ruddock said, not Bronx Health Reach.

“We recognize that we’re not experts in what the funding should look like,” she said. “What we are asking for is that in all agencies of the city government — education, housing, health, employment — that the Bronx be prioritized.”

“We’re seeing some impact happening there,” she said. “What we can point to where we see an overall concerted effort on the part of our decision makers, policymakers, elected officials understanding and improving the factors that keep us at 62.”

But until something improves and the Bronx sees some improvement in its ranking, the group will continue its annual rallies.

“We intend for it to be a yearly thing,” Ruddock said. “We intend for us to be such a thorn in the side of our elected officials that they cannot but pay attention to it.”