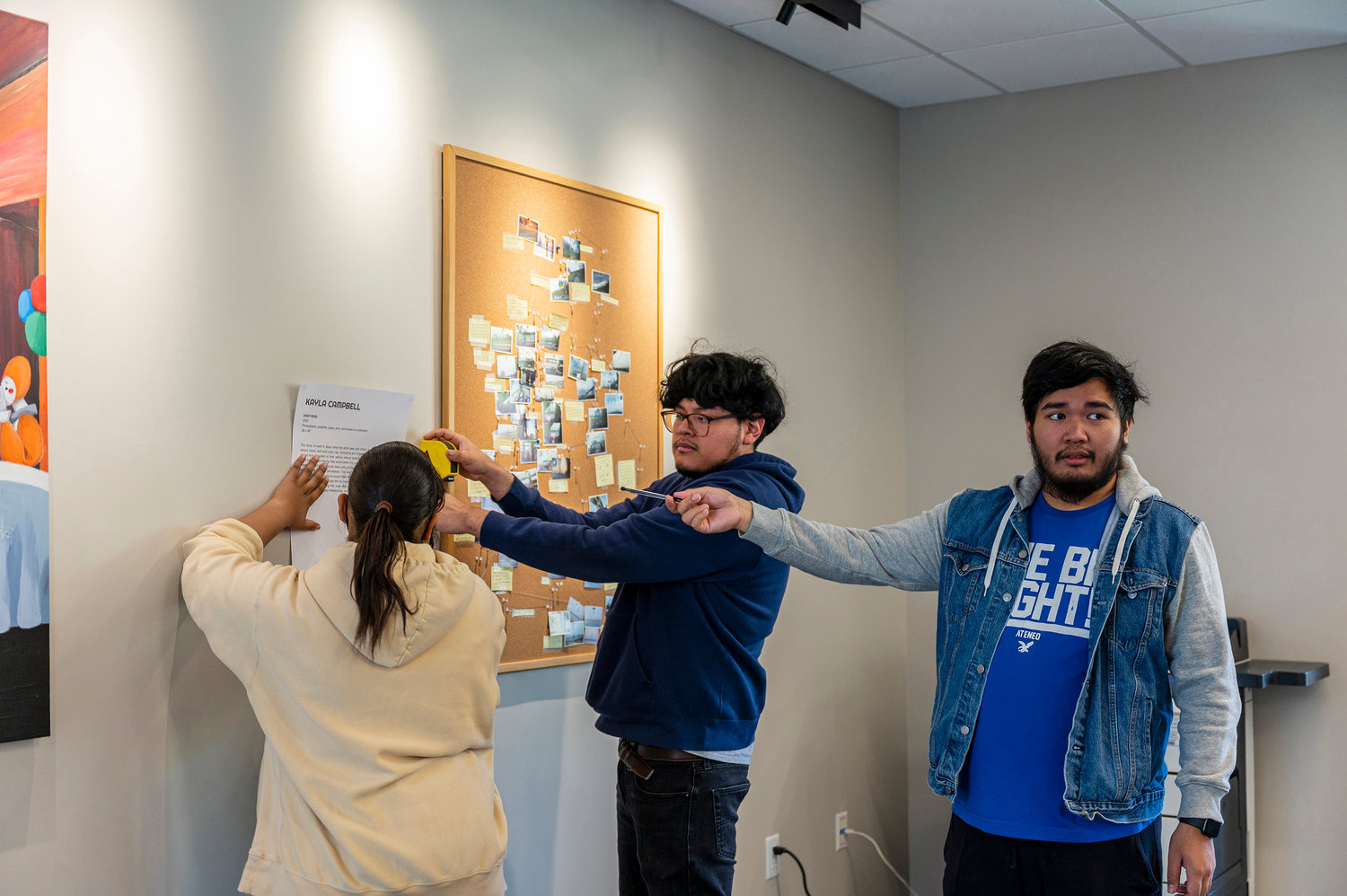 Mount Saint Vincent students Miguel Losa and Frederick Reyes, center, prepare to install their artwork with Kayla Campbell prior to an art exhibit that ended on May 10. All seniors enrolled in the required Capstone class in their senior year. It is designed to introduce seniors to the professional world.
Hiram Alejandro Durán 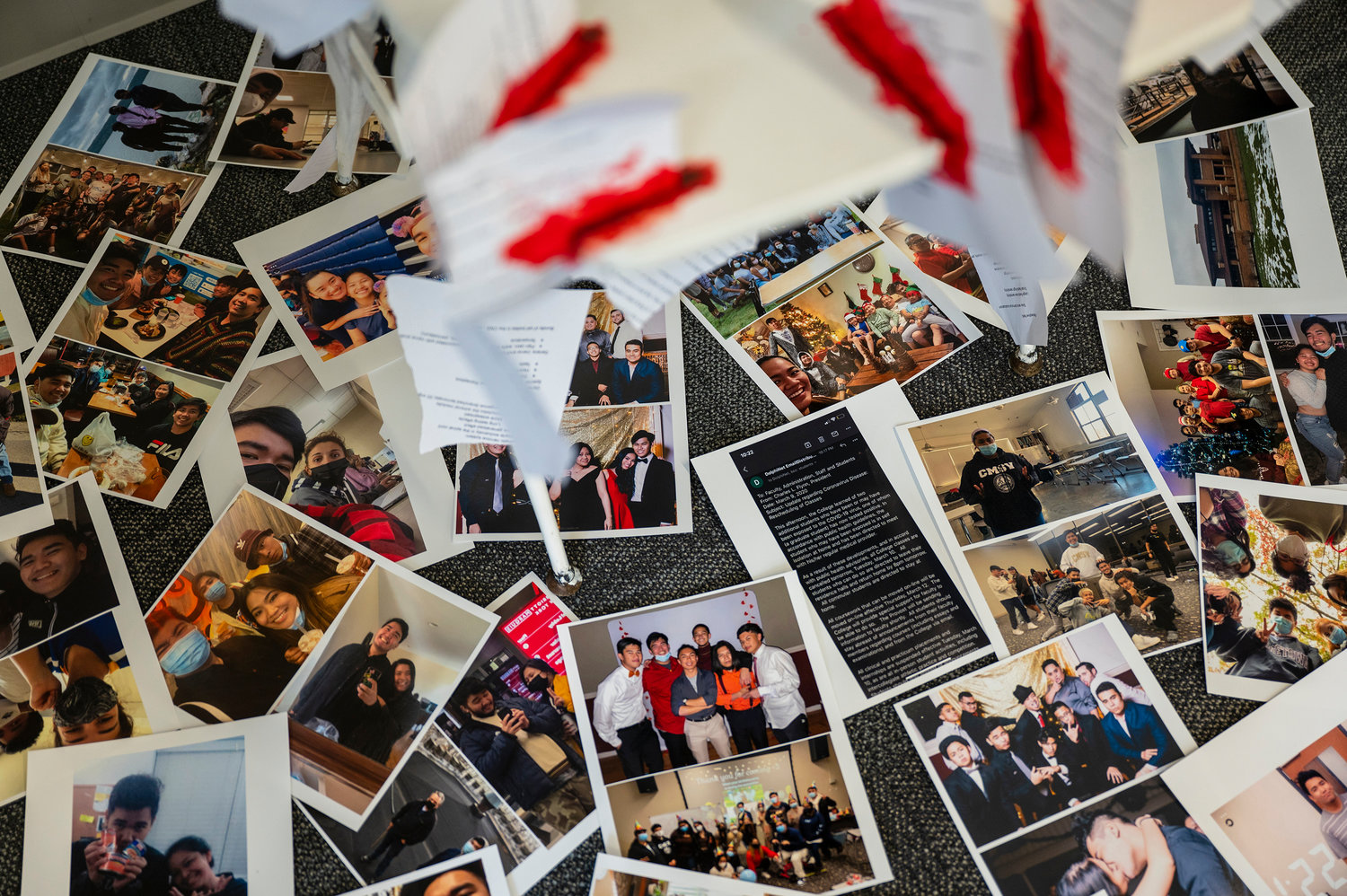 Miguel Losa is studying Art History and Studio art and wants to pursue a career in architecture and conservation. He names his piece 'Stressed Memories,' which encompasses his coming of age story at the College of Mount Saint Vincent. He placed a desk firmly on the ground, surrounded by a scattering of photos.
Hiram Alejandro DurÃ¡n 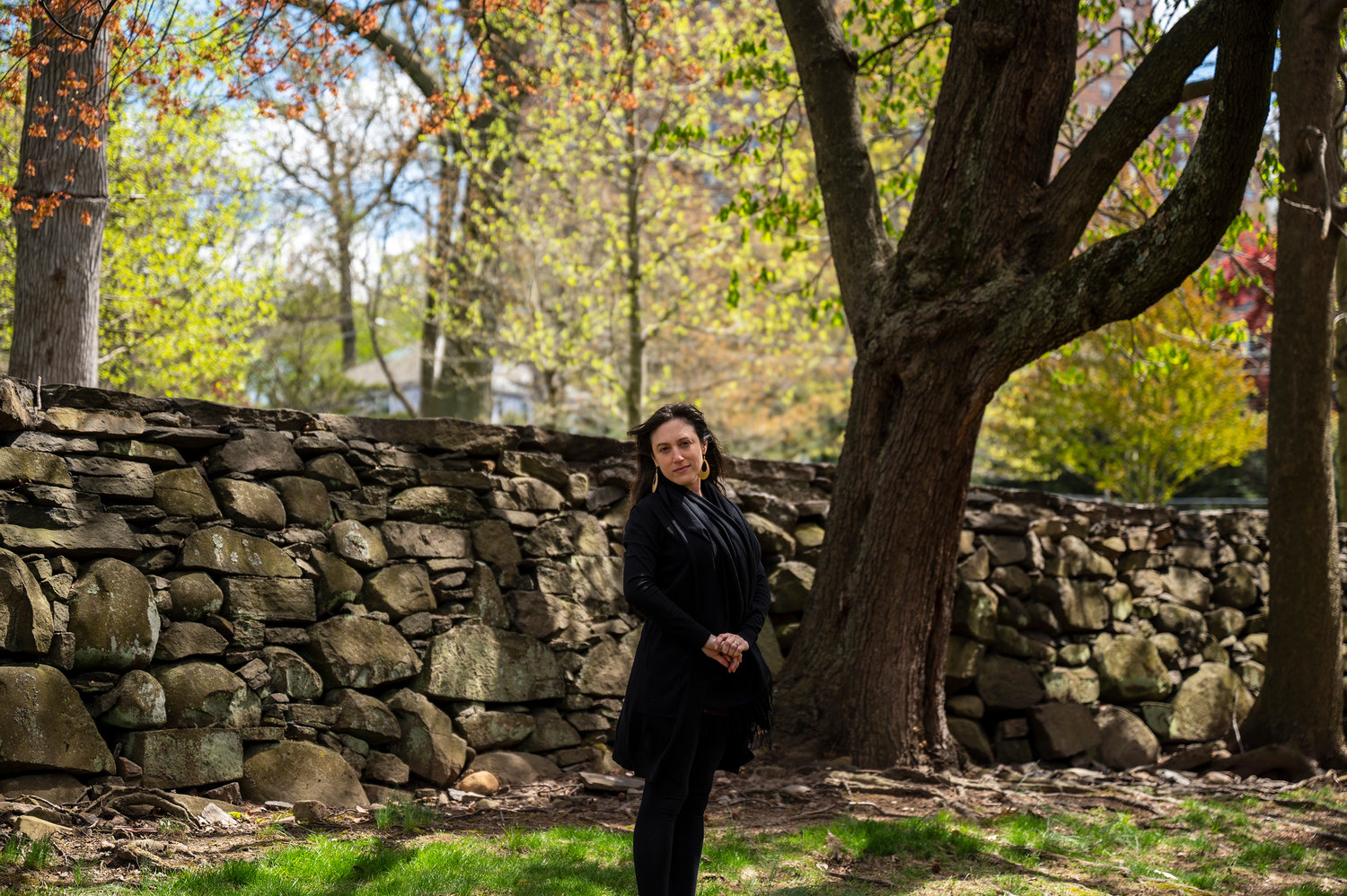 Stephanie "Stevie" Velez is one of five students who enrolled in the College of Mount Saint Vincent's Capstone program for seniors. She produced a short film and paintings, acrylic on wood and stills from the film.
Hiram Alejandro Durán
Previous Next

I’m not a drawer. I am not a painter. I am not creative in that way. I like to tell stories.”
FREDERICK REYES, Mount student
By STACY DRIKS

Two seniors at the College of Mount Saint Vincent share a common interest — art. They just came to be interested in it through very different experiences.

“I’ve always had a pencil in my hand, even when I was a lot younger,” senior Stephanie “Stevie” Velez said.

Velez polished her portfolio as a teenager as she took courses at the teen program at the Metropolitan Museum of Art, the largest art museum in New York.

“Where I’m from,” fellow senior Frederick Reyes said, “the art kids were the outcasts and the weirdos.”

As a son of working immigrants, Reyes found it hard to navigate in Urban Assembly for Careers in Sports high school located in the south Bronx. The preparation for a career in the sports field was the top priority for students.

By avoiding the title of an outcast, his surroundings didn’t push him toward art or anything that has to do with creativity and eventually shielded him from it.

One of his interests, besides art, is sports.

“It can’t be all about sports,” Reyes said. “So I figured I’d step into a world of film and media.”

Reyes has an interest in pursuing a career utilizing his digital art skills. Such as Photoshop, photography, audio, and design.

Velez said that if an individual is an art person, they should feel that there are hundreds of opportunities.

As a freshman, Reyes decided to major in visual arts and experimental media. Velez did, too.

To finish off their undergraduate degrees, students enroll in the mandatory Capstone class. The Capstone is an internship that allows students to gain additional experience while testing their skills in the professional world.

In the class, students began in January to create their last piece for their portfolio as they exit with their bachelor’s degrees.

Moreover, this is the most significant piece of their art portfolios since students bring it to the professional world.

The idea behind the Capstone is that the students propose their visions with guidance from professors Laura Miller and Thomas Willis.

Students “start from contextual research, brainstorming, word mapping, and mood boarding, or sketching their ideas to creating a small model,” Willis said. They then move to execute the project.

Joining Reyes and Velez in the two-week exhibition on the second floor of the Elizabeth Seton Library were Miguel Losa, Storm Gibbs and Kayla Campbell. The series ran from April 28 to May 10.

Reyes proposed his piece, “Bloodsport the show must go on,” which reflects the true story of Formula 1, the highest class of international racing for an open-wheeled single-seater car.

Reyes told The Riverdale Press that Formula 1 struck a chord when he first heard about it.

“It was kind of crazy to see a sport where death was a part of it,” Reyes said, “It was a very common, very normalized thing.”

More than 50 drivers have died while racing Formula 1 cars, while 32 died during world championships in the 1950s through 1970s. Eventually, F1 increased its safety measures, and death no longer hangs over motorsports.

“To see somebody’s passion result in their death was kind of crazy to me,” Reyes said.

His appeal to the story stemmed from his interests in sports and exploring the difference between other major sports leagues in the United States. The piece is loaded with elitism and socioeconomic status.

The young storyteller took archived footage and then crafted something very personal that revealed the emotional underbelly of the motorsports industry.

Reyes’s work was more than a YouTube video as it made an artful statement, whereas Velez created a body of work but with paintings and photographs in videos about her own personal experience.

Her work, “I’m tired,” is a short film that uses sequences to show her coming of age.

It includes paintings, acrylic on wood and stills from her short film. With the same materials, she crafted another painting called, “I want to stay.”

“The short film does have different points where I portray emotional trauma, and the trauma is stemmed from toxic friendships,” Velez said, “Toxicity with people feeling like I need certain people in my life to have a reason to keep going.”

Velez based it off her struggles with a drug addiction and how she came overcame it. But yet, the story is put in a very abstract way instead of direct discourse.

She took a still from her film to create a painting where she is disheveled, lost and doesn’t know where to go.

The short film suggests that the viewer is more than capable of being their own person without the control of another. Velez expresses being herself and learning how to be comfortable with herself.

“My statement pretty much says that you may feel like you actually know an individual, but you only know a portion,”  Velez said.

Miller sees the work of Velez and Reyes as examples of what other students the college can do if they have an interest in the arts.

“We want to be able to highlight student work and give other students and staff on campus the ability to see what they’re making and attract students to those majors,” Miller said.

Both professors are trying to propose art space. The idea is to curate and have their own space, rather than holding the exhibit in the library.

They are starting to transition to a greater contemporary art program.

“Contemporary artists are working interdisciplinary and with digital tools as well as painting and fine art stuff,” Miller said.