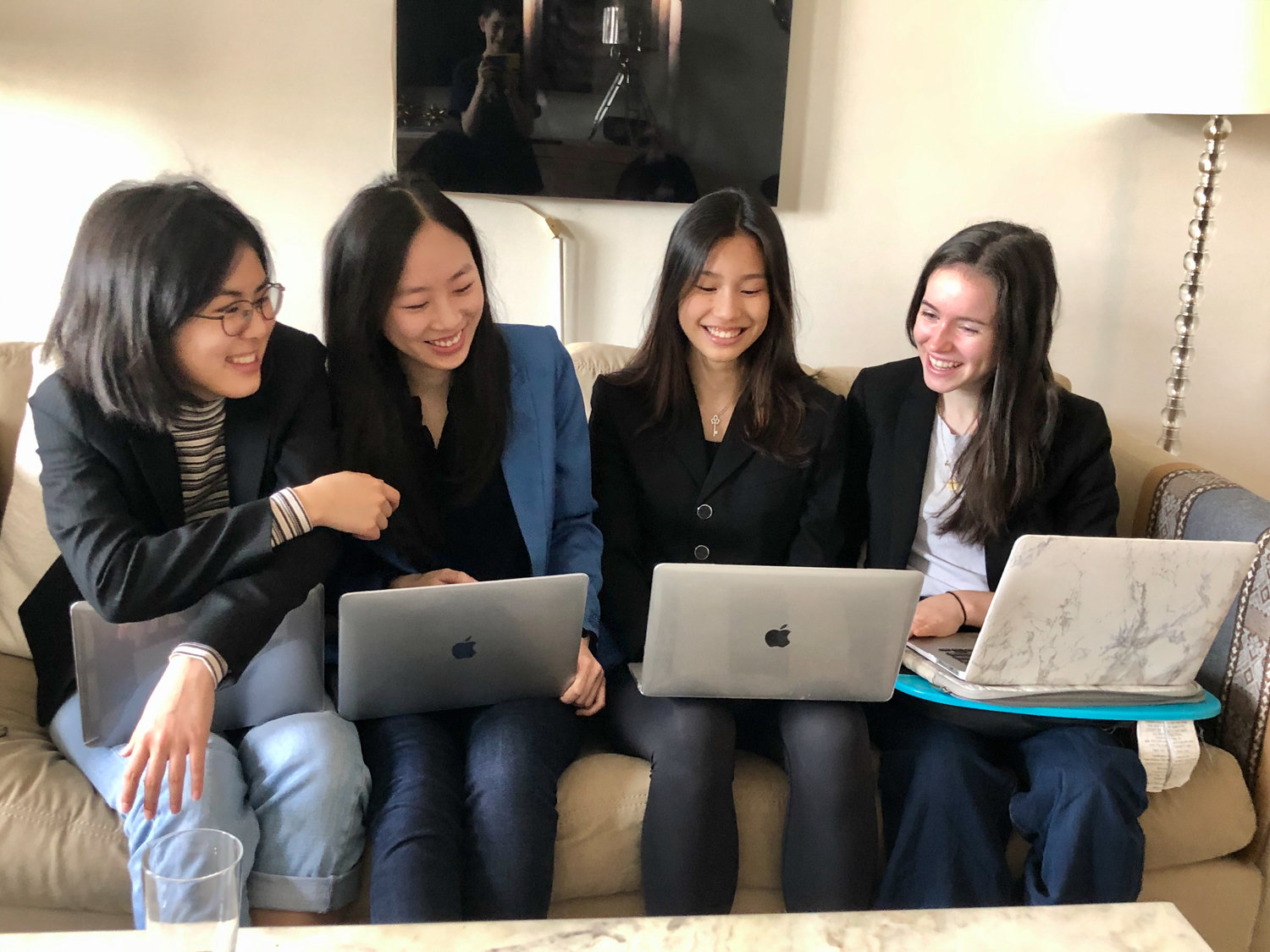 Rosemary Jiang, left, Olivia Pollack, Vivian Lee and Natalie Chen had a productive first year as members of the Females in Finance Club at Ethical Culture Fieldston School. Before the school year was cut short because of the coronavirus pandemic, they qualified for the global finale in the Knowledge@Wharton High School investment competition.
Courtesy of Olivia Pollack 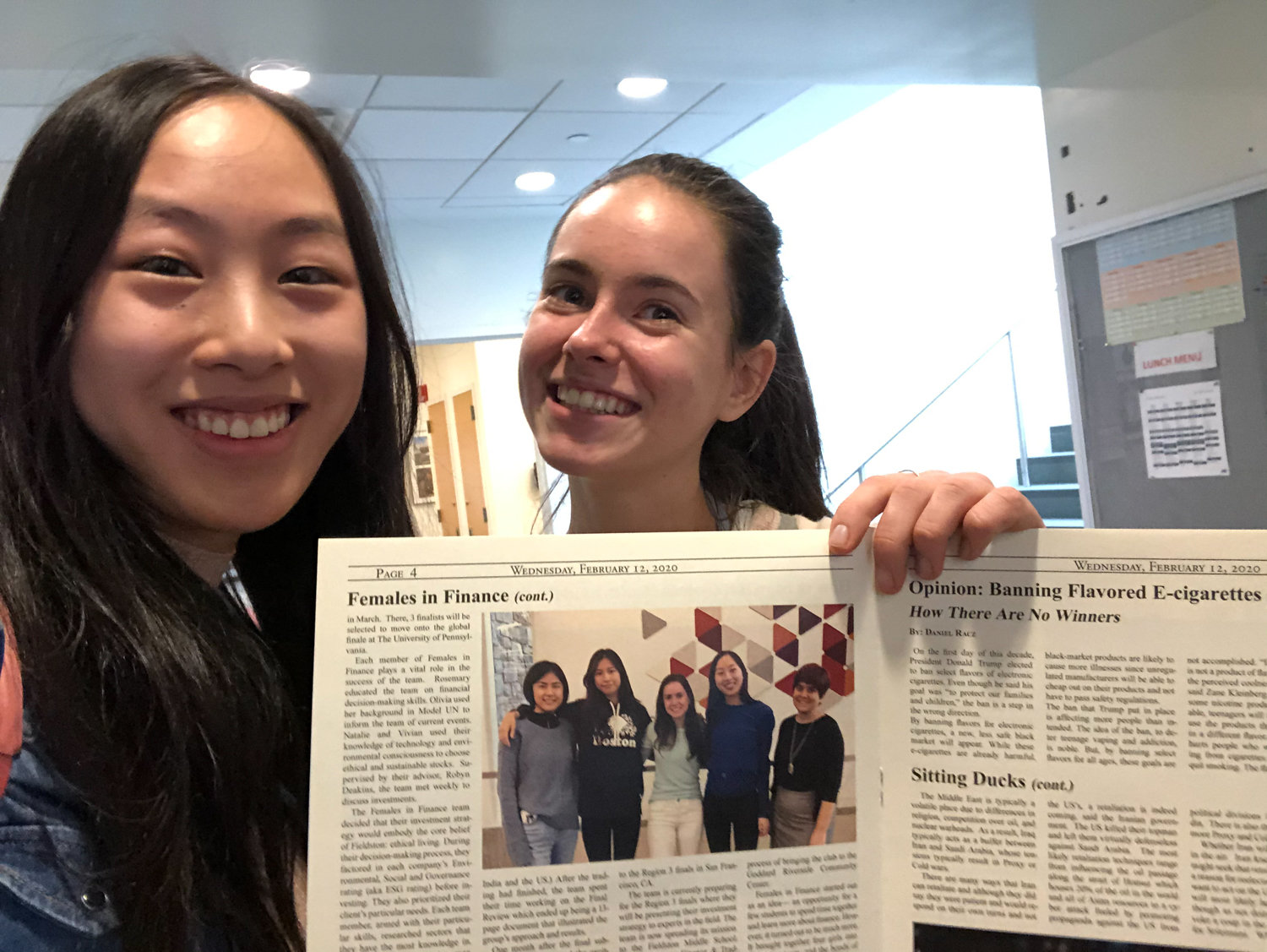 Olivia Pollack and Rosemary Jiang were thrilled about being featured in the Feb. 12 issue of The Fieldston News. Pollack and Jiang are members of Ethical Culture Fieldston School’s Females in Finance Club, which had an impressive first year before the coronavirus pandemic intervened.
Courtesy of Olivia Pollack 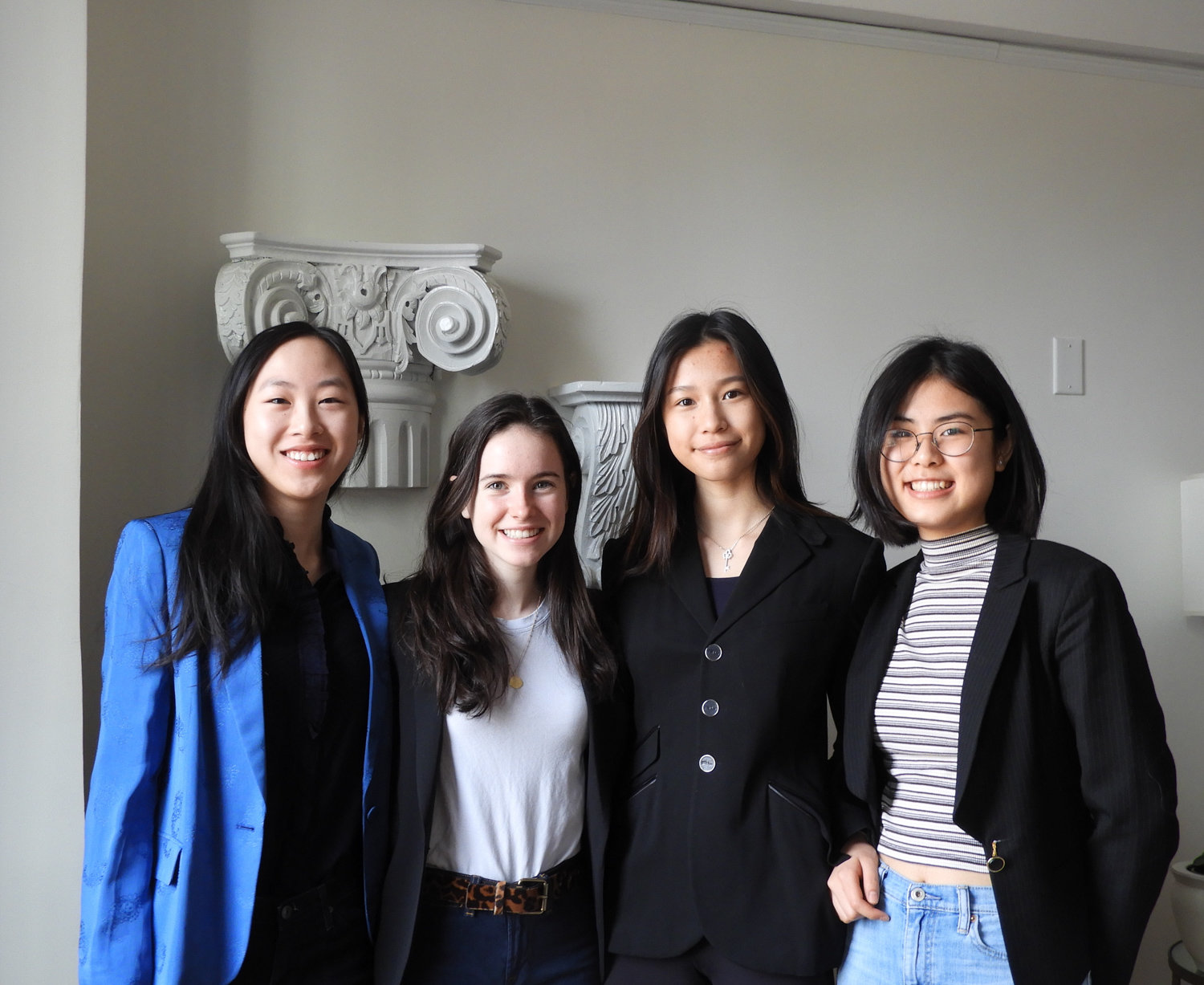 A career path in finance is one with a notable gender gap. According to Forbes, only 15 percent of financial executives are women despite the fact they account for 46 percent of all employees in the field. Career advancement for women in finance isn’t impossible, but it’s difficult.

But at Ethical Culture Fieldston School, four young women are looking to change that.

Fieldston’s Females in Finance Club formed just this year, but its members already are making waves in finance and investing. And, as evidenced by its name, all four of the club’s members — and its advisor — are women.

Rosemary Jiang, the club’s founder and team leader, was interested in finance long before she came to Fieldston. Both her father and her brother pursued careers in finance, so the Fieldston junior decided to follow in their footsteps. Once she began learning about the field, however, she quickly learned of its gender gap.

“I knew that much like other fields, finance is male-dominated,” Jiang said. “For me, it is often discouraging (to see) the lack of women in the field, which is why I created Females in Finance.”

A school club, however, needs an advisor. Jiang looked no further than Fieldston’s math club, which was advised by Robyn Deakins. It didn’t hurt that Jiang already knew Deakins, since she’s a proud member of that club as well.

“I know (Rosemary) specifically wanted a female advisor since part of the club’s mission is female empowerment,” Deakins said. “As a woman in mathematics, I hope I can act as a role model and inspiration.”

Pollack’s background includes Model United Nations, and although she also was a member of Fieldston’s math club, she didn’t exactly have a defined interest in finance before joining the team. But now Pollack sees how her extra-curriculars inform each other.

“I never truly understood the financial aspect of international politics,” Pollack said. “As such, I chose to join this club so I could become more financially literate and have a more robust understanding of foreign policy.”

The club’s members then began a yearlong process of preparing for the Knowledge@Wharton High School Investment Competition. Part of the University of Pennsylvania’s Wharton school, the competition’s competitors create investment strategies for $100,000 in virtual cash. Preparation included creating reports and other documentation for the competition.

Although Females in Finance is a new club, the young women from Fieldston advanced to the regional finals. There they had to prepare a 10-minute presentation detailing their investment strategy — something that was supposed to happen in-person in San Francisco last month. But the coronavirus pandemic had other plans, and the trip to California was canceled.

But even in the world of finance, if life throws a curveball, you still have to take a swing. That’s what Jiang and her teammates did, presenting a video submission instead.

The strategy paid off because Fieldston’s team has now advanced to the global finals.

The Females in Finance Club is also committed to women’s empowerment and teaching financial literacy to women.

That means preparing even younger girls for potential roles in the industry through a branch in Fieldston’s middle school known as GIFT — Girls in Finance and Trading.

Jiang isn’t stopping there. Once the pandemic subsides, she plans to bring GIFT to the Goddard Riverside Community Center on Columbus Avenue in the Upper West Side. Ultimately, Jiang wants to expand Females in Finance outside of Fieldston to schools all across the country.

Pollack finds herself bringing lessons she learns in Females in Finance to other parts of her school life. She’s the only woman on Fieldston’s varsity squash team, for example, and Females in Finance taught her how to thrive in a male-dominated environment.

“Because of (Females in Finance), I was no longer intimidated by my teammates and commanded their respect,” Pollack said.

Jiang originally felt discouraged when she saw so few women in Fieldston’s investment club. Now her goal is to ensure girls have the same opportunities men seem to typically get by default.

“I took it upon myself to create a club where young women can feel safe and accepted to pursue their interest in finance,” Jiang said.

“Even though I am still in high school, I understand the biggest impact I can make is to start educating the young, because if anything, my school has taught me to be the change you want to see.”