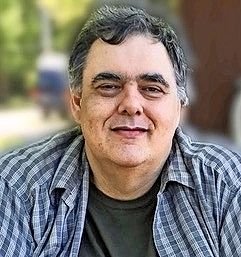 Beloved son, brother, uncle and cousin, he was born May 17, 1963, to Frieda (née Boehmisch) Hyland and Edward Leahey, the youngest of three children.

He attended Visitation Grammar School and graduated high school from the Allegro School in Claverack. He went on to achieve a bachelor’s degree in psychology and political philosophy from Fordham University, with subsequent graduate work in special education at Hunter College.

He worked for AHRC New York for many years, first with handicapped adults, then later with preschoolers. He enjoyed many summers working at Camp Catskill for the developmentally disabled upstate, an experience he cherished.

In his later years, he worked as a senior sales manager for Librarians Book Express, part of Rosen Publishing, selling curriculum support books and befriending school librarians across the country.

He was a true Bronxite — playing darts in the local pubs, rescuing street cats, and participating in Bronx cultural events, such as concerts at Wave Hill, Gaelic Park and Van Cortlandt Park. He was devoted to his Kingsbridge neighborhood and Visitation schoolmates (Class of 1977), and was always planning get-togethers.

He was a classical music aficionado, and a regular member and attendee at Carnegie Hall, befriending the ushers and often buying tickets for friends and family so they also could attend.

He may have been Stevie Nicks’ greatest fan, meeting her backstage several times, and following her and her bands around New England with his friends.

He was a student of the world — he had a keen and inquisitive intellect, and could speak extensively on history, geography, science, politics and musicology. He had an amazing memory for people and details of their lives, and his winding stories were entertaining and educational as he reminisced on an obscure event or friends he had made.

He was a culinary and wine expert, and he enjoyed making delicious homemade sauces, breads and dinners for neighbors and family.

His nieces and nephews had a standing laugh about Uncle Glenn’s famously long-winded phone calls, but they always learned something new from them. He often ended these calls saying, “Don’t be a stranger,” which is ironic, because in his world, there were no strangers, only people he had not yet befriended.

He put forth tremendous efforts to connect with and support others. There were no relatives, friends or acquaintances too distant who didn’t feel the positive impact that he had on them. The loss from his family and friends is profound, and will be deeply felt forever.

He ended every phone call with “bye for now!” which we now say to him.

In lieu of flowers, make donations in Glenn Leahey’s name to Bronx Tails Cat Rescue at BronxTails.org/donate; Camp Anne for people with disabilities at AHRCNYCFoundation.org; and Carnegie Hall at CarnegieHall.org/support/donate.

An online service will take place Friday, Feb. 26 at 4 p.m. Those who would like the Zoom link can reach out to sister Linda Bowe at lbowe23@gmail.com.