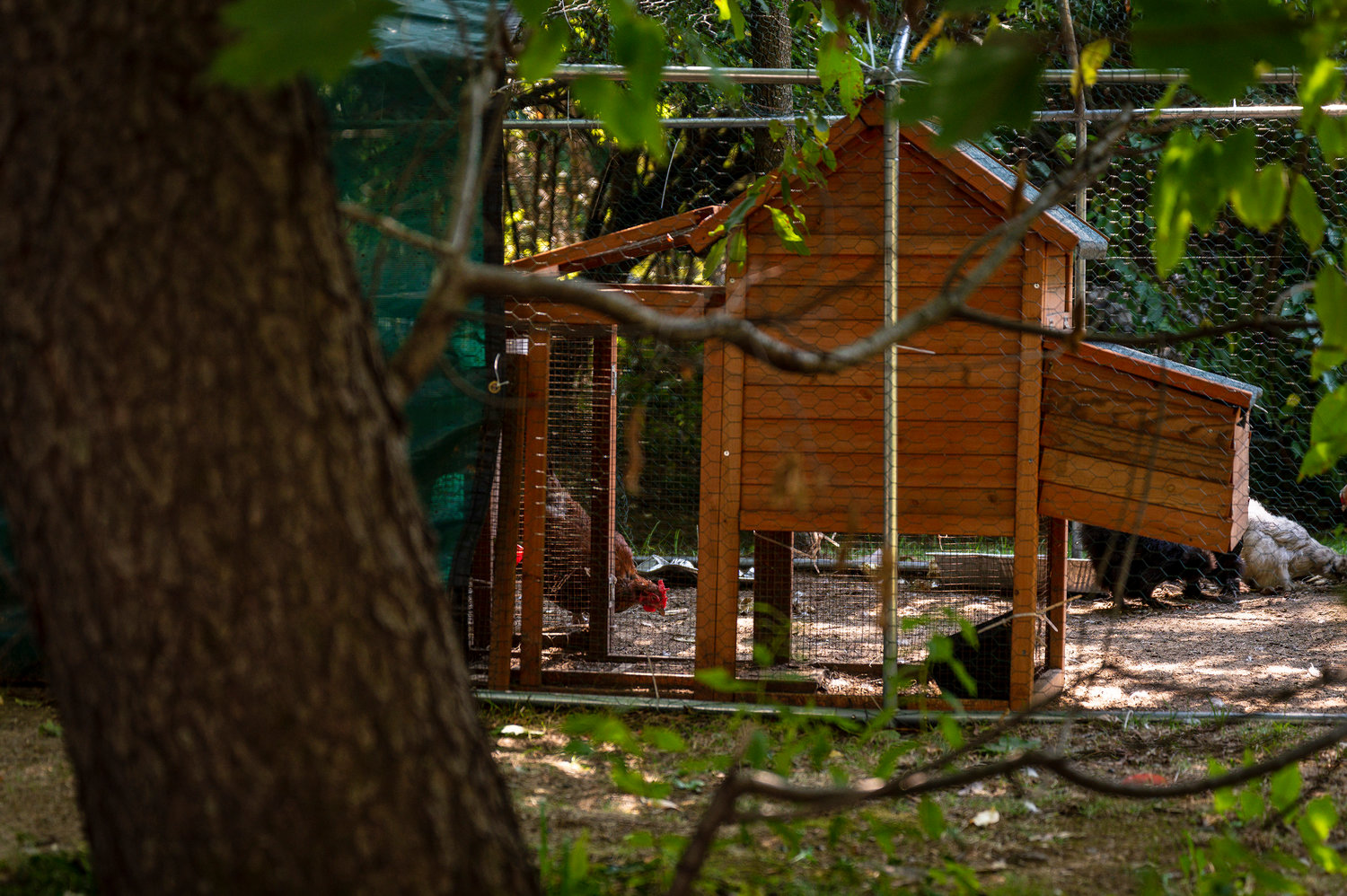 Two roosters at 6 Ploughman’s Bush no longer reign on the front porch of Lidia Lidogster. New York City Department of Health and Mental Hygiene removed the animals from her house and received a summons. Now all that is left is around five hens.
Hiram Alejandro Durán

Ideally, this is the last time we hear about crowing at the crack of dawn in our community.”
JEFFREY DINOWITZ, Assemblyman
By Stacy Driks

It was just after lunch as the sun was shining its brightest in August when Lidia Lidogster, who resides at 6 Ploughman’s Bush, was visited by the city’s health department and mental hygiene. They were looking for something, someone, or perhaps a cockerel in a corral.

With consent from Lidogster, Anais Torres, one of the agency’s employees, investigated the property. In the yard was a chicken coop, pretty large in size, but whatever was inside was not what Torres was searching for.

The coop is a couple of feet long with a partial cover over the coop and a distance away from her porch on large open land with grass surrounded by trees.

“I am hopeful the rooster will find a good home outside the five boroughs where it can live legally and happily,” said Assemblyman Jeffrey Dinowitz.

The owner voluntarily surrendered her pets to the Animal Care Center on Aug. 22. It is mainly a shelter that rescues and cares for abandoned animals in the city.

Someone outside the five boroughs may have adopted the rooster, but contact ends typically from there.

“In response to a complaint, the department conducted an inspection and found roosters. New York City residents are not allowed to keep roosters. Hens are not prohibited,” said Shari Logan, department of health spokesperson.

Lidogster currently has around five hens outside in her large coop.

Judith Veder is a neighbor of her feathery nuisance who has been awakened numerous times by crowing at unusual hours. Some are at the crack of dawn, when she is reading a book or trying to take a nap.

Last summer, Lidogster had another rooster. After a confrontation with Veder, who contacted Dinowitz’s office, the owner gave her roosters to a vendor from The Riverdale Y.

Veder had been making 311 calls since the spring once she heard the first crow. However, she says each call she made got dismissed.

Veder hopes this is the last of the Lidogster’s foster roosters. Apparently, the roosters were brought to the property for children to play with during COVID.

For Veder and her husband, the rooster saga has made them somewhat anxious.

“It was so ironic, we (Veder and her husband, Saul Scheinbach) were on vacation in Joshua Tree National Park, and one of the places we stayed had a little farm — and there was a rooster,” Veder said. “We looked at each other and said ‘no.’”

Either way, once Lidogster did not give away or sell her pets, she was issued a summons to appear in court Oct. 3 or pay a fine of $500.

She had a little more than a month to contemplate what to do. She had two options, pay the summons or attend in court.

It is unclear why she did not respond to the summons. However, Veder said that Lidogster might think she is doing nothing wrong.

“It appears that she will be found in violation, by default, for failure to respond to the summons, the only way to avoid this I if she pays the current $500 penalty in full” Oct. 3, said Marisa Senigo, deputy commissioner and public affairs of the office of administration of trails and hearings.

Senigo told The Press this on the day of the hearing.

The health department has a rule on situations such as these. Since this is a default decision, the penalty is doubled. Lidogster now owes $1,000.

Veder did not want it to come to this — however, she was patient while waiting for agencies to visit her property.

She told The Press that since the spring, she reached out to 311 to complain about a rooster. She was convinced the agencies did not do a full and proper inspection because the roosters were always at her property.

The owner allegedly told Veder during the summer she would eventually get rid of the roosters.

The owner confessed to Veder she did not know which of the feathery pets were roosters or hens.

Veder patiently waited again until Lidogster figured out the gender. But Lidogster did not keep her word as she continued to foster them. The continuation of crowing did not stop, and Veder’s frustration grew.

“It is unusual to have had this issue come up for a second time — I can only hope it does not come up a third time,” said Dinowitz. “If it does, then I guess we will have to go back to the Department of Health and push for enforcement of our municipal laws governing livestock in New York City.”