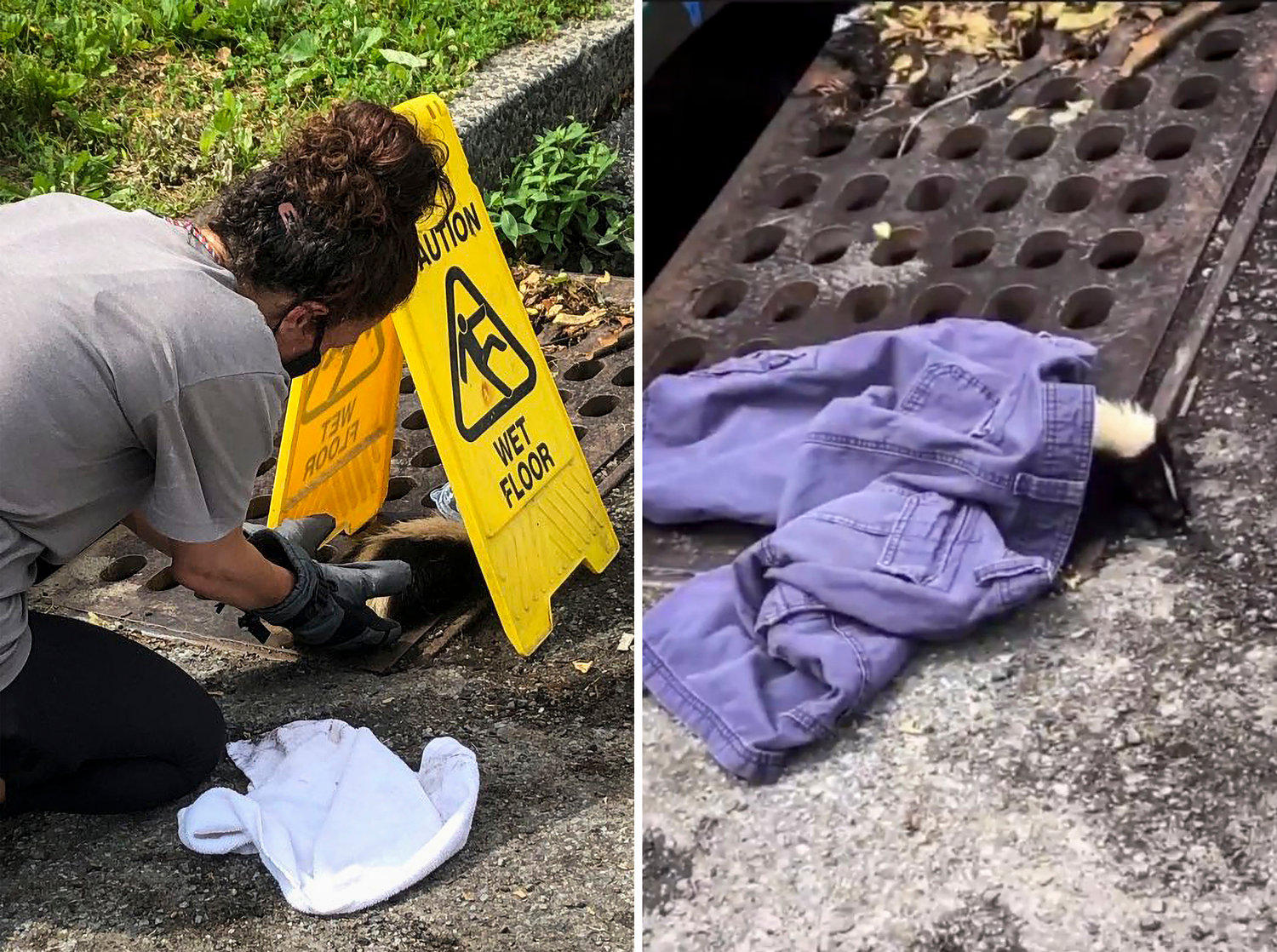 Sandy Sierra brought a caution sign to warn others to steer clear as she and other North Riverdale neighbors helped rescue a baby skunk from where he was trapped inside a sewer grate on Arlington Avenue. They used clothing to cover the skunk, keeping him warm.
Courtesy of Beth Schumacher 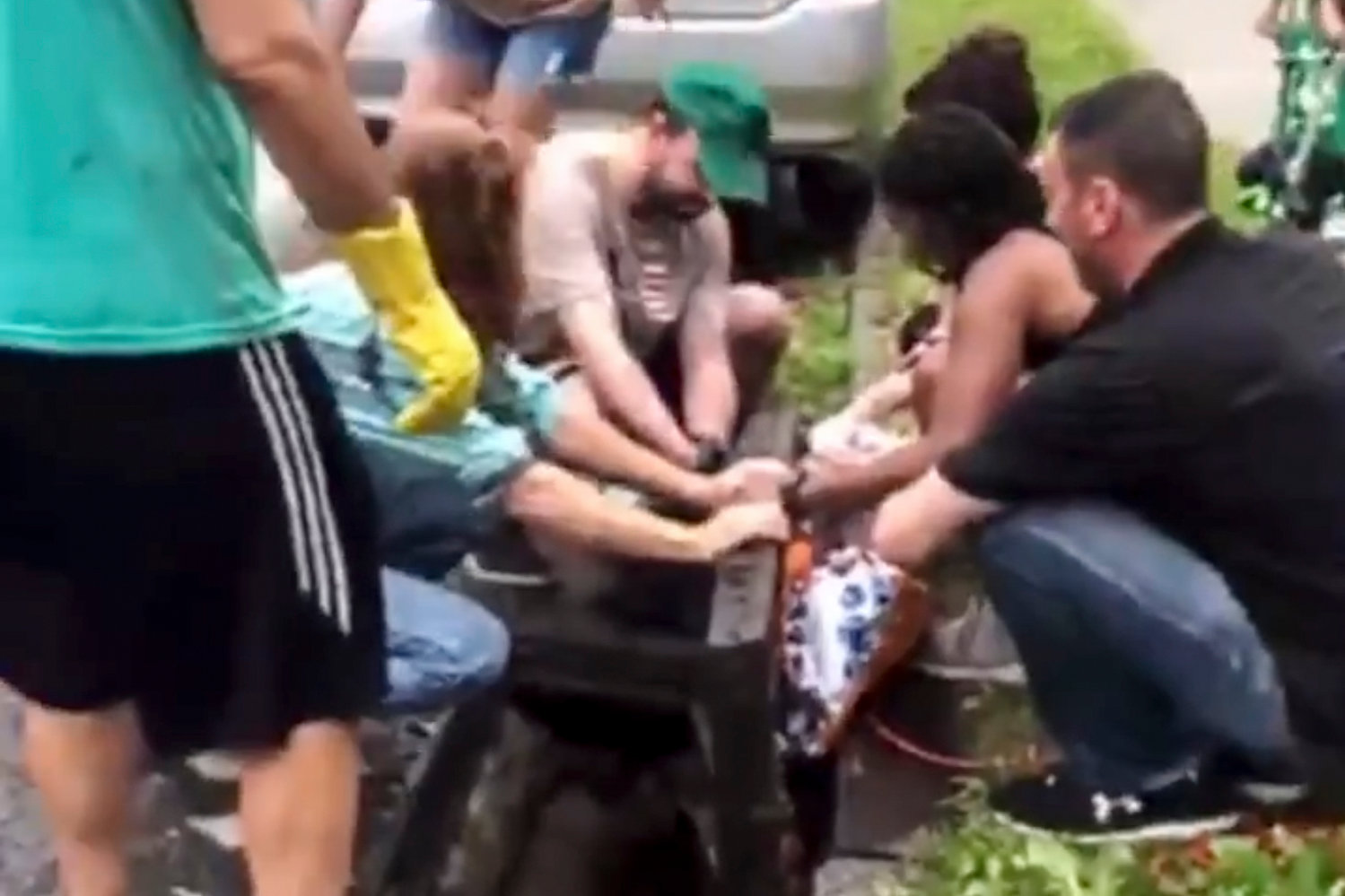 Several gathered to help rescue a baby skunk from an Arlington Avenue sewer grate, including Frank Cotrone, donning yellow gloves. Cotrone originally visited the site because he heard about an animal in the sewer and wanted to show his daughters. But when he realized the skunk was in danger, he got some tools — like cooking oil — to help.
Courtesy of Beth Schumacher 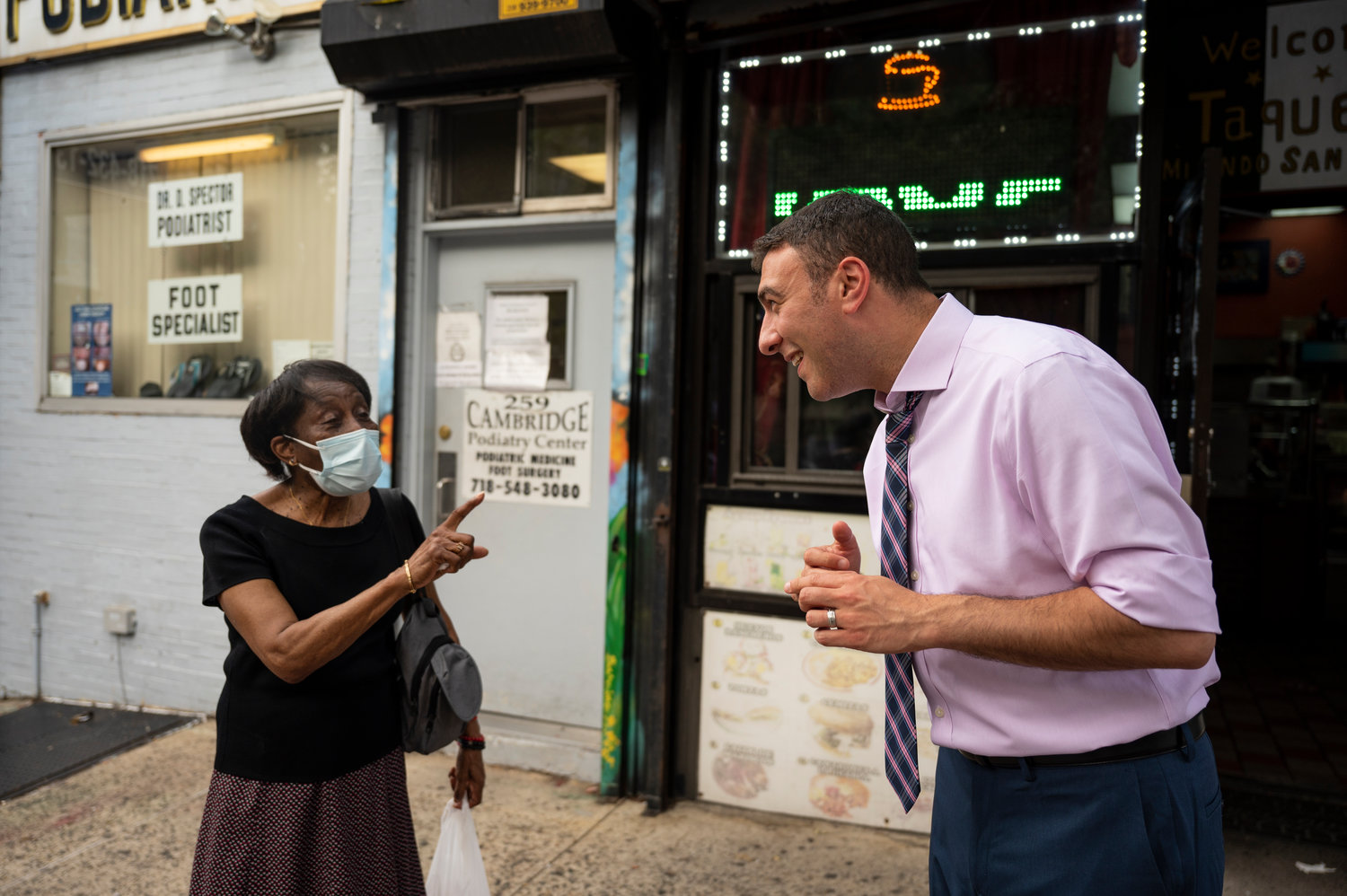 Councilman Eric Dinowitz happened to be walking by the commotion at an Arlington Avenue sewer grate when he noticed his wife, Tamar, was helping others rescue a baby skunk. He joined them, staying until the young animal was finally freed from the grate. Dinowitz later said he hopes animal services will be more attentive to situations like this in the future.
HIRAM ALEJANDRO DURÃN
Previous Next
By JILLEEN BARRETT

If a cat gets stuck in a tree, the fire department may come to the rescue. If a dog runs away, their owners offer a reward to whoever finds it.

But what happens if a skunk gets stuck in a sewer grate?

That’s what Tess Schumacher wondered when she found a baby skunk in exactly that position while she was walking down Arlington Avenue earlier this month.

“My first thought was to call 311,” said Schumacher, a media communications student at Marymount Manhattan College. “I first called my mom and asked her what I should do, and that’s what she suggested. But then they basically said they couldn’t help me.”

But the initial efforts to rescue the skunk from the sewer grate in between West 256th and West 259th streets were unsuccessful, prompting Beth to make public pleas on social media sites like Twitter, tagging organizations from the local fire and police departments, to the American Society for the Prevention of Cruelty to Animals.

“Please, if you have a heart, come & help free” the skunk, Beth wrote in a tweet. “For the past hour we have been trying to.”

Sandy Sierra and Frank Cotrone were each just walking by as the group gathered around the sewer grate. Without hesitation, both pitched in to help. Sierra brought household items like water and even a caution sign warning about the troubled animal. Cotrone, a construction worker, grabbed some gloves and held the skunk’s tail down as cooking oil was used to help wedge the animal out of the grate.

The last thing any of them wanted to do was seriously hurt the baby skunk while trying to rescue him. Sierra phoned a friend who was able to help them know what to look for as they attempted to save the skunk’s life — and some unique aspects about them that could help the rescuers.

“Well, I would wedge my fingers between the skunk and the sewer grading (because) my friend Rob had also said their bone structure is not like ours. They’re very malleable,” Sierra said. “Do not be afraid to hurt it, because it will be more hurt if it gets eaten or went over by a car.”

It’s probably easy to forget in a situation like this what skunks are known to do — like release a pungent spray — or maybe even hurt someone out of fear. But Sierra says that wasn’t the case here.

“Never once did he squeal,” she said.

“Never once did he try and bite. And you know, you can tell this poor thing was scared to death.”

But as the small group tried to literally squeeze the baby skunk through the grate, he released many of his natural chemicals — leaving a smell behind that Tess said remained potent days later.

Animal services may not have showed up. But their local city councilman did, even if only by chance. Eric Dinowitz happened by to see his animal-loving wife Tamar helping the group rescue the skunk. Like the others there, he didn’t hesitate to jump and lend a hand of his own.

“It’s extremely disappointing that we needed (animal services, and) they weren’t there,” Dinowitz said. “But I think the positive part about all this is that, just like a lot of problems, it really just takes people coming together, finding a solution, and working together toward that solution.”

Still, there must be better ways to handle this — something the councilman said he’ll look into for the next wild animal that needs help inside the city. Many who helped were ultimately out there for more than three hours, which might not have been the case had professionals stepped in.

“I certainly think that animal services should be more readily available,” Dinowitz said. “You know, the (environmental protection department) is in charge of the sewers, for example, but they’re not equipped to help animals in that specific instance. The animals deserve care just, just as any other living thing deserves care.”

Tess Schumacher shared the councilman’s sentiment, noting that even if an animal is generally categorized as unpleasant or harmful in some way, it does not mean it should be treated inhumanely.

“I think that there should be a designated number to call, because there really wasn’t one for this kind of situation,” she said.

“They considered a skunk to be a pest, but it’s still a living thing.”

CORRECTION: Although her daughter, Tess, was on-scene to help a trapped skunk on Arlington Avenue, Beth Schumacher was not. A story in the July 15 edition stated otherwise.