Fieldston construction turns into a mess

Hopeless residents have complained they can't walk across street or park 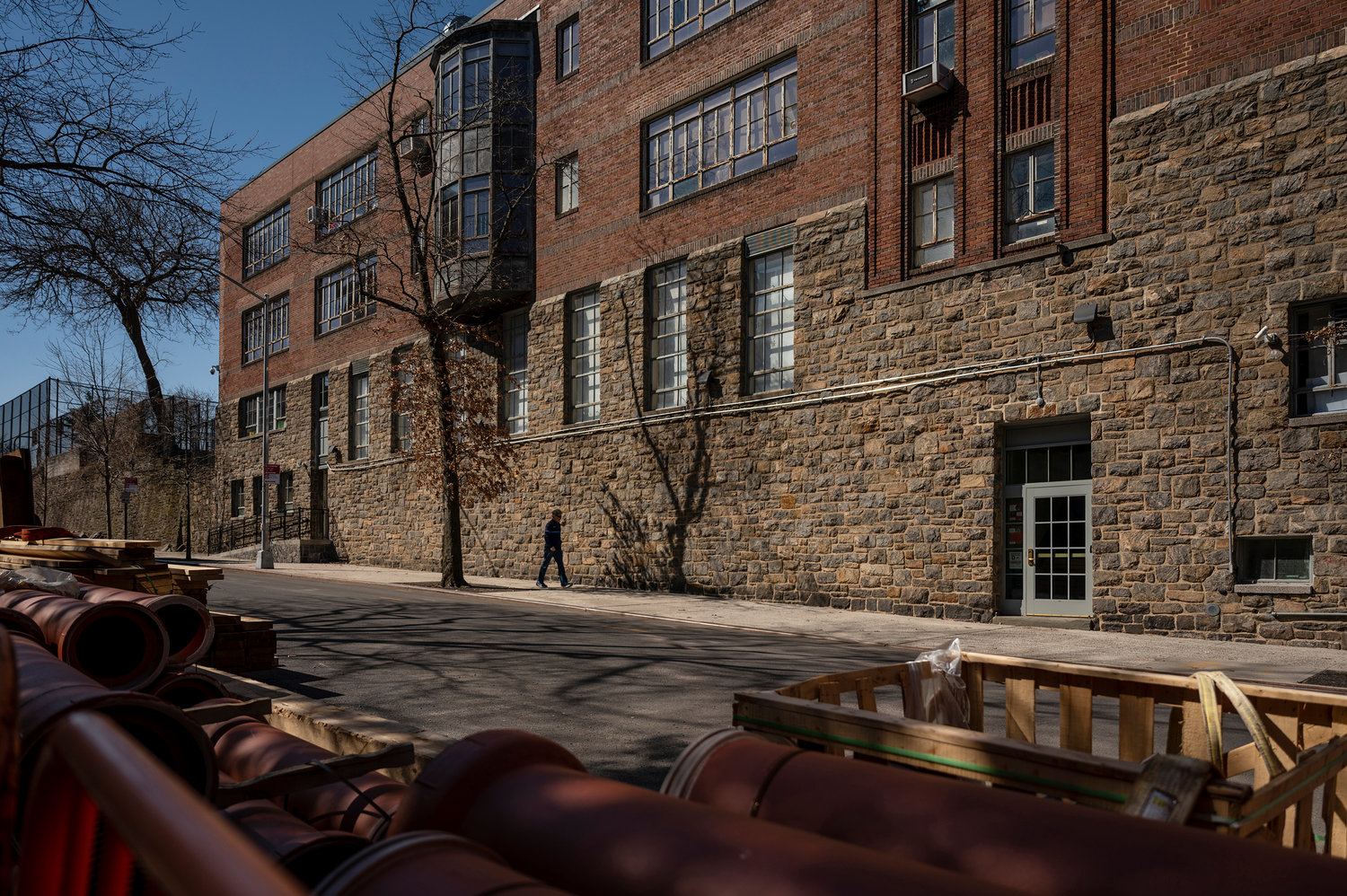 Pipes and construction equipment are an inconvenience to the residents in Greystone Manor as it blocks public parking on their street for the past few weeks. Ethical Culture Fieldston School is located across the street that makes it almost impossible for cars coming from both directions to pass by as school buses park there for student pick-up. Construction site that equipment was left there for a month blocks off parking spots for residents on Greystone Avenue that goes along West 242nd Street to 240th Street.
Hiram Alejandro Durán 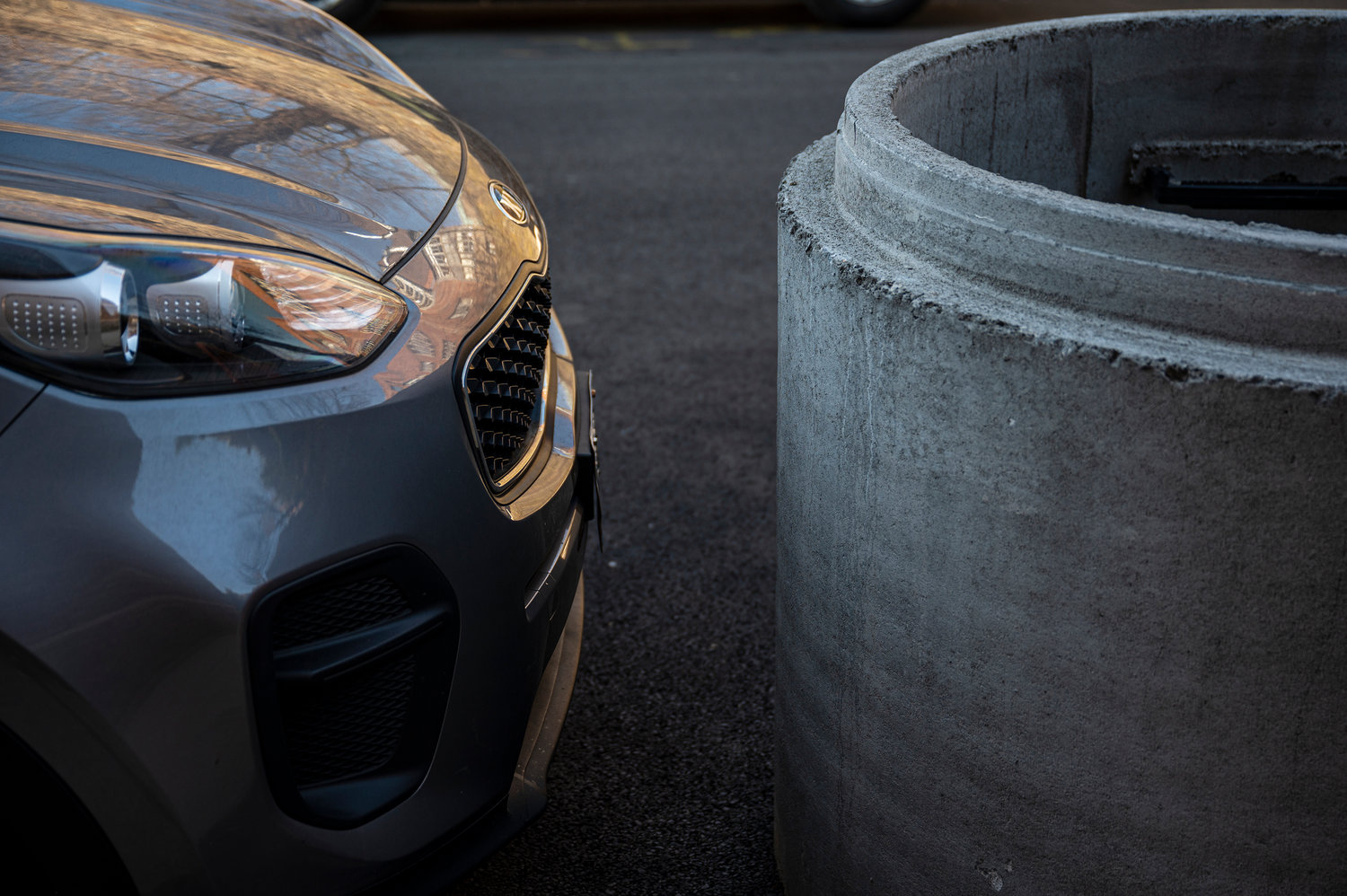 Drivers desperately squeeze in the few parking spots that remain thanks to construction both in front and behind their building.
Hiram Alejandro Durán 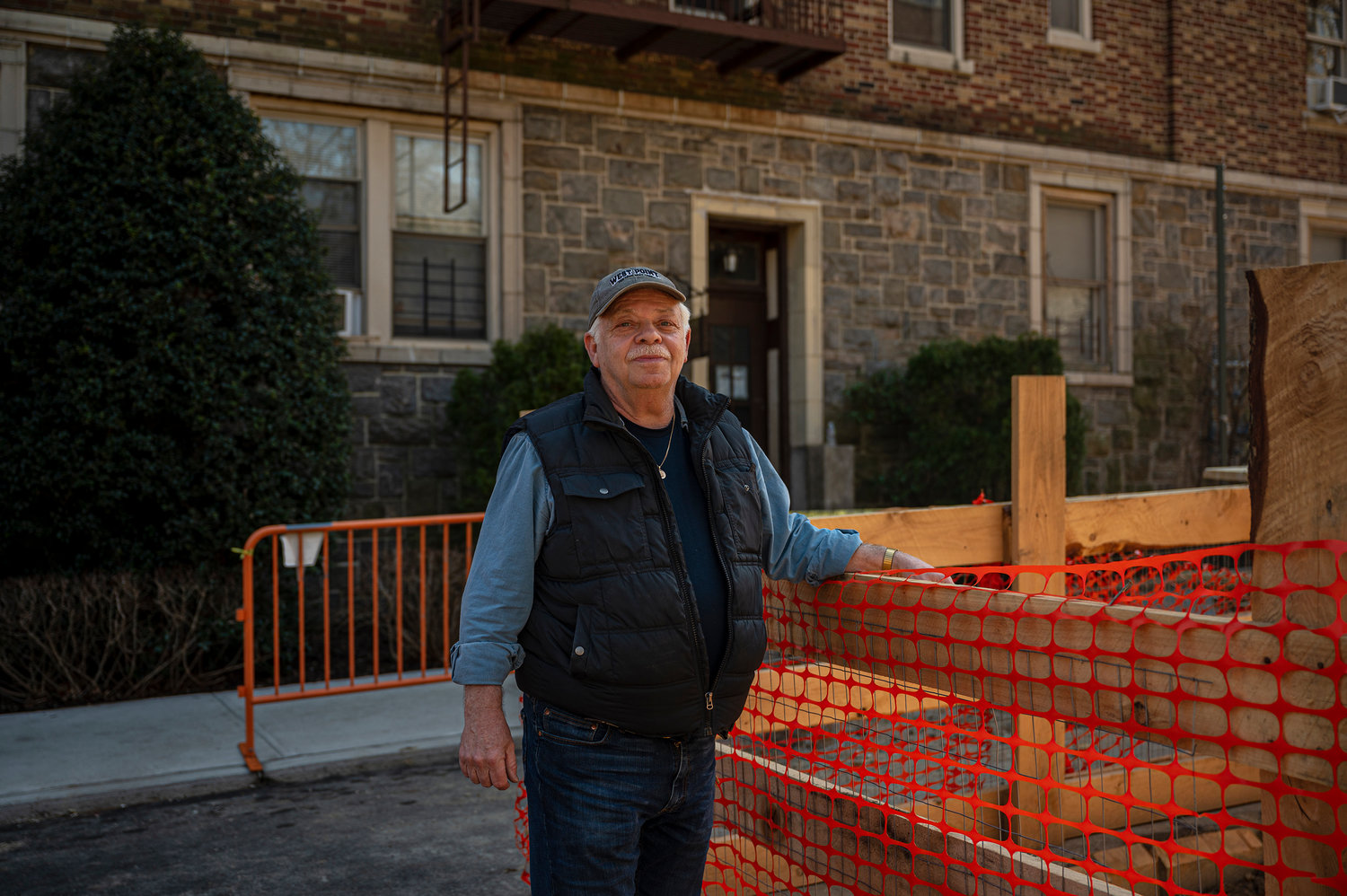 Gary Oliver has lived in Greystone Manor in Fieldston for more than 30 years — much of that time as a super. Oliver is concerned about how neighboring construction dating back to August has affected the quality of life in his community.
Hiram Alejandro Durán 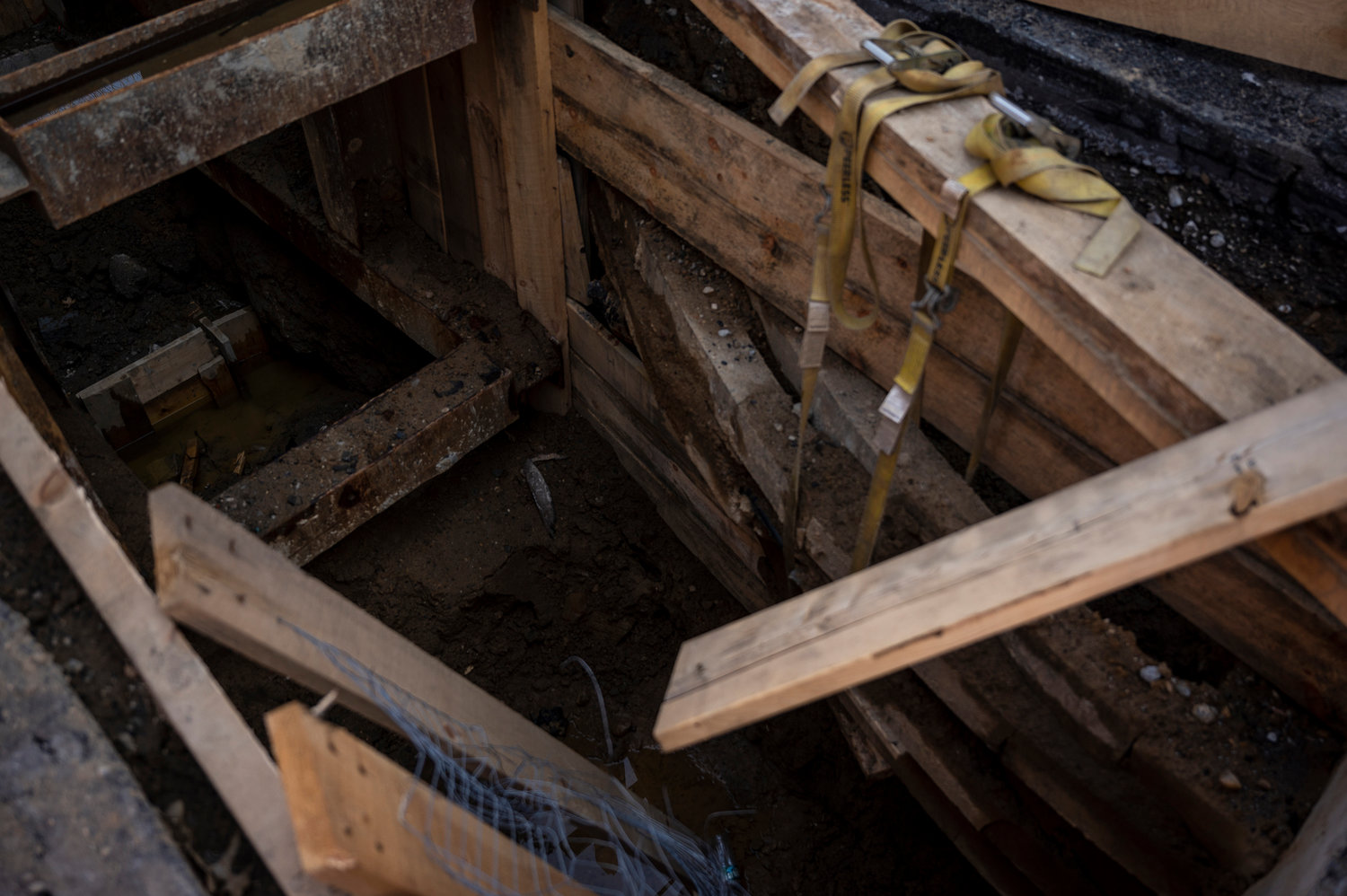 A collapse of a structure results in a cave-in or a trench collapses are common in underground work. This one is left alone on Greystone Ave which can be dangerous and even deadly. If a worker is inside that gives them little time to react..In order for the crew to maneuver themselves around ConEdison’s utilities to fix the constantly broken sinkhole — two large holes were dug that creates a cave in.
Hiram Alejandro Durán 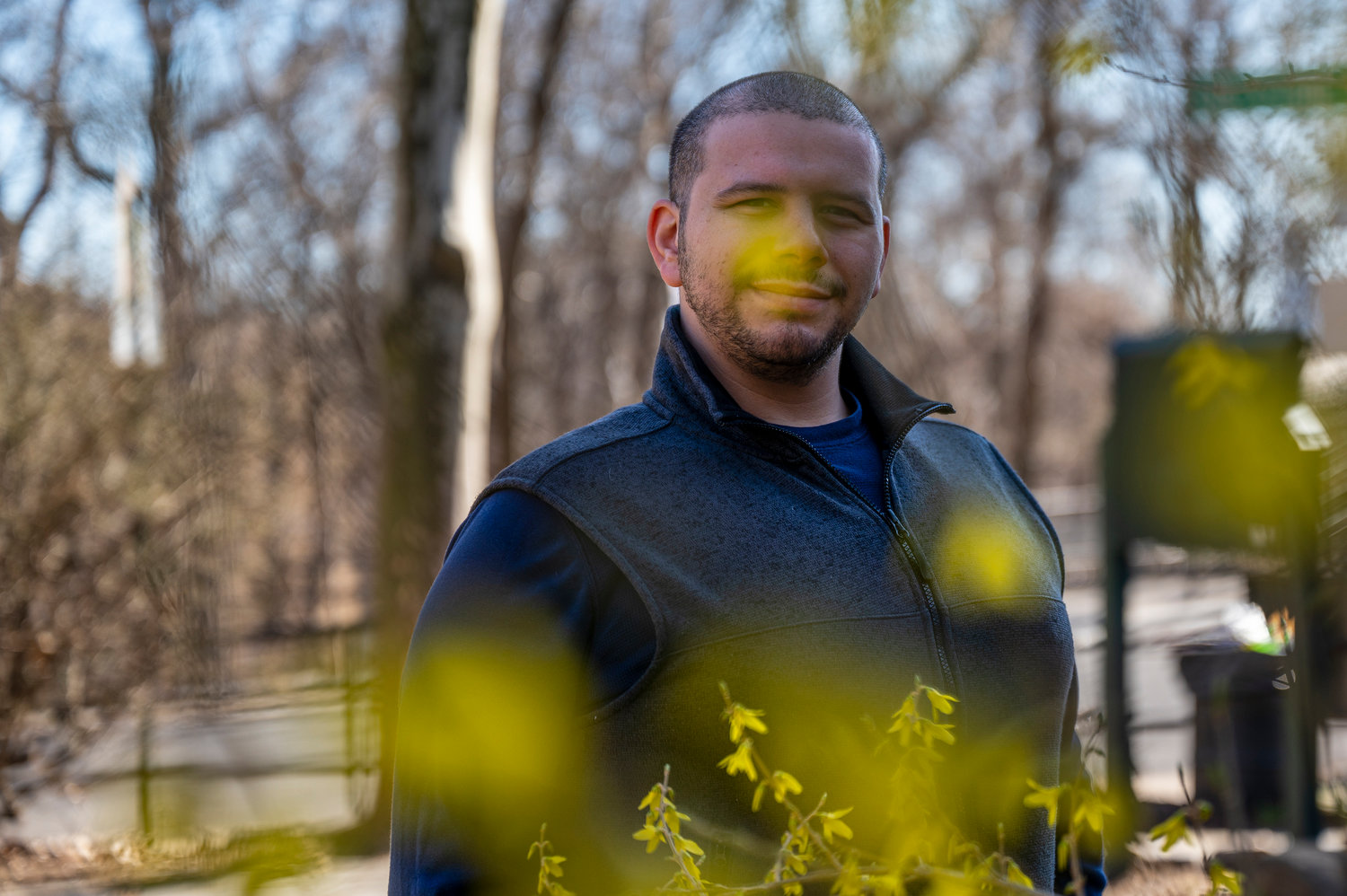 Geoffrey Weiss made his first 311 call last August to complain about the constant construction near his Greystone Manor home near West 242nd Street. So far, however, Weiss has yet to find any resolution.
Hiram Alejandro DurÃ¡n
Previous Next
By STACY DRIKS

There has been a lot of construction taking place on Greystone Avenue near West 242nd Street. But the  sudden change of scenery Greystone Manor residents discovered one day in front of their six-section complex was quite unexpected.

Geoffrey Weiss, a real estate agent who has lived in the Fieldston community for the past several years, said he first called 311 about it last August but received no response.

That was the time work trucks moved onto the streets around Ethical Cultural Fieldston School on what appeared to be nothing more than a simple repavement project. But then someone spotted the sinkhole not far from the more than 100 apartments that make up Greystone Manor.

Construction workers immediately erected barricades around the sinkhole, with hopes of  fixing it. But doing that was not as simple as workers thought, apparently. Each time they thought they solved the problem, the street would collapse again. Eventually, the entire road caved in.

“Something is in their way,” said Gary Oliver, Greystone Manor’s super.

The damage was a sewer pipe underneath a buried electric utility that was installed by ConEd.

After months of construction work, and as the weather started to warm a little, construction crews invaded the area between West 242nd and West 240th streets. Pipes were stacked as high as seven feet, surrounded by caution tape, more than a dozen bricks, round cones, and detached construction plows from payloaders.

Enough with 311. Some of the neighbors turned to Assemblyman Jeffrey Dinowitz. The lawmaker reached out to the city’s environmental protection department, but found his own stumbling blocks on what officials called “utility interference” involving Con Edison. Apparently, ConEd needed to fix its wires and pipes to finish the operation.

What does ConEd say? Dinowitz doesn’t know. His office never received a response.

“From my understanding, ConEd needs to step in and address the situation,” Dinowitz said. And referring to recent reports of higher-than-expected charges that were first reported earlier this year in The Riverdale Press, “ConEd is usually faster with sending out inflated bills then they are responding to thinks like this.”

ConEd told The Press it had nothing to do with the issue. Its pipe was indeed there. However, “infrastructure works in a funny way,” according to a spokesperson.

While ConEd admits its pipe slowed down construction, it didn’t prevent that construction from moving forward.

And the DEP backs ConEd. Depending on the borough, infrastructure from several utilities could be buried under the roads. This includes electric, gas, water and sewer lines. When workers need to fix streets, the buried utilities might be in the way.

—Yet, there is a way to work around those utilities.

“That issue has since been resolved, and this location is scheduled for the sewer repair to resume in the next few weeks,” a DEP spokesperson tells The Press.

“As aggravating as it is to have to deal with this now, I think it would be even worse if the roadway collapsed,” Dinowitz said, in a release

When school is in session at Ethical Culture Fieldston, buses get backed up on Greystone Avenue, which neighbors say make it almost impossible for cars to get by.

“Buses are coming through this street, and it’s dangerous.,” Weiss said. “My side mirror hit the bus because they wouldn’t move. They’re not even trying to be good neighbors about it.”

Weiss believes buses should go somewhere else away from the torn-up street.

The school has two entrances to their campus — one on Greystone and the other on Manhattan College Parkway.

“They don’t care about this mess,” Oliver added.

As hard as it already was to find parking, Oliver said, it is now even more challenging. At the same time, behind Greystone Manor, there is more construction — this time for a new building.

“It’s like a surround sound of construction,” Weiss said.

Greystone Manor was constructed in 1928 without a garage, so parking is at a premium. Many have found a parking lot about a half-mile away, but more often than not, it’s full, meaning they have to depend on finding an open spot on the streets.

But there is some light at the end of the tunnel. City officials say once construction finally begins, it will last for about 10 days. After that, everything will get back to normal.