Gridironers lose their homecoming game in a tough match with RCDS 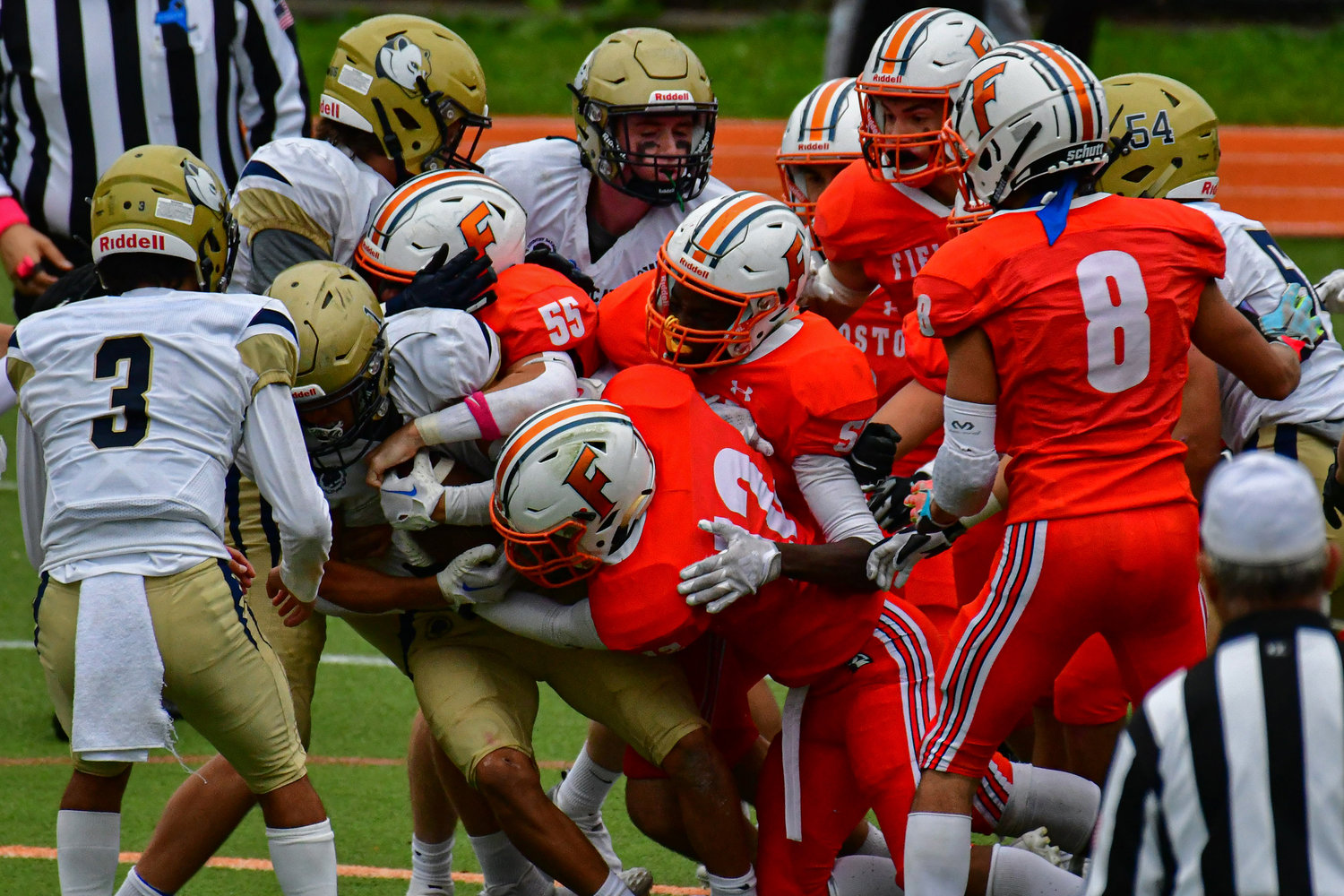 A Rye Country School running back grinds out some yards against Fieldston Saturday in their big 38-0 drubbing of the Eagles.
Prep football

The Fieldston Eagles (1-3) couldn’t overcome a key injury to their starting quarterback in last week’s close loss to Morristown-Beard Crimson. And it showed in the score Saturday as they were shut out by Rye Country Day (3-1), 38-0 at Fieldston’s homecoming.

Prior to the boys high school football game, the Eagles had a great week of practice, and the team thought it was ready to make up for last weekend’s loss.

Quincy Levitt, senior captain, said: “The team learned a lot from these past couple of weeks. Being in two very close games this early into the year has really taught us how important it is to take no plays off and to compete from start to finish.”

Wes Heiman, junior QB, was a late scratch this week due to a head injury suffered in last week’s game. The Eagles had to turn to sophomore QB Gideon Bialkin.

The powerful and discipline Rye Country Day defense was too much for Bialkin and the Fieldston offense. Despite a couple of promising drives to begin the first quarter, the Eagle’s attack could not put any points on the board.

Rye Country senior QB Henry Cohn was 9-14, 195 yards and 3 TDs, with the longest being a 62-yard pass to junior Cole Denson, who caught two of the scoring passes. Denson added a rushing TD as he had 12 carries for 61 yards.

The two other Rye Country TDs were scored by Michael Meghee, a senior back, and A. Pisacano, a senior receiver.

Fieldston’s offensive leaders were senior QB/RB Jaden Mena (4-4 for 34 yards passing and 6 carries for 9 yards) and senior WR Aidan Ginor (2 receptions for 27 yards). Bialkin finished the day 6-11 on 42 yards passing. As a team, the Eagles were held to 88 total yards.

Next week, the Eagles will face the undefeated Riverdale Falcons on the road in the infamous “Battle of the Birds.” This rivalry is expected to be an entertaining match-up. Heiman’s status is still up in the air.

Last year, the Eagles came out on top, blowing out the Falcons 31-0. Chase Mitchell, a four-year starter now senior captain on the o-line, says, “this game is one we look forward to all year.

“In my high school career, I am 1-1 against Riverdale. Hopefully, we pull one out this weekend and build some momentum for the rest of the year.”

The Riverdale Country School Falcons ran up their unbeaten streak to 4-0 Saturday with a 42-0 drubbing of Newark Academy at home.

A combination of a stout defense and impressive ground game got the Falcons off to a fast 28-0 lead in the first quarter. As the offense collected nearly 300 total yards, including 244 rushing yards for 4 touchdowns and 50 yards for 2 TDs, the defense ran back an interception for six points, recovered two fumbles and recorded two sacks.

On the receiving end, WR Cameron Sewell caught both passes from Spiegel for a pair of TDs, including one for 37 yards.

The Bulldogs got off to a 14-0 start in the first half and put the game away with a fourth-quarter TD.

On Sept. 23, DeWitt Clinton defeated Lane of Brooklyn 24-8 in a home game.

The Governors will next host Bryant of Queens in a PSAL-A game Saturday.

The Owls come into the game 0-1 having forfeited to the John Adams Spartans on Sunday.