In their first away match-up, Eagles battle through starter injuries 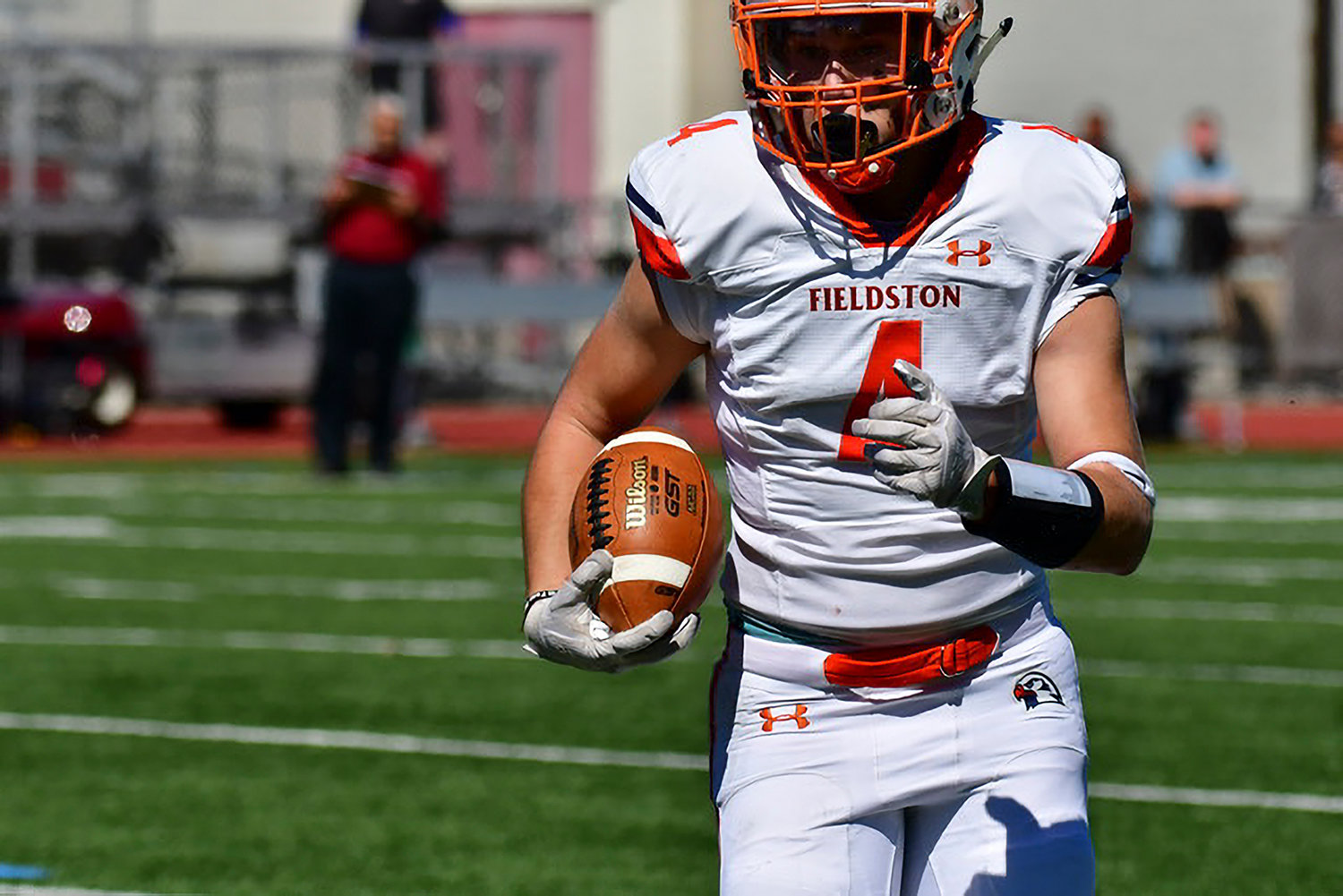 Rusher Blake Koons gets some separation as he finds a hole in 23-18 loss to Morristown-Beard Saturday. He finished with 130 all-purpose yards, including 109 on the ground.
Gene Assaf 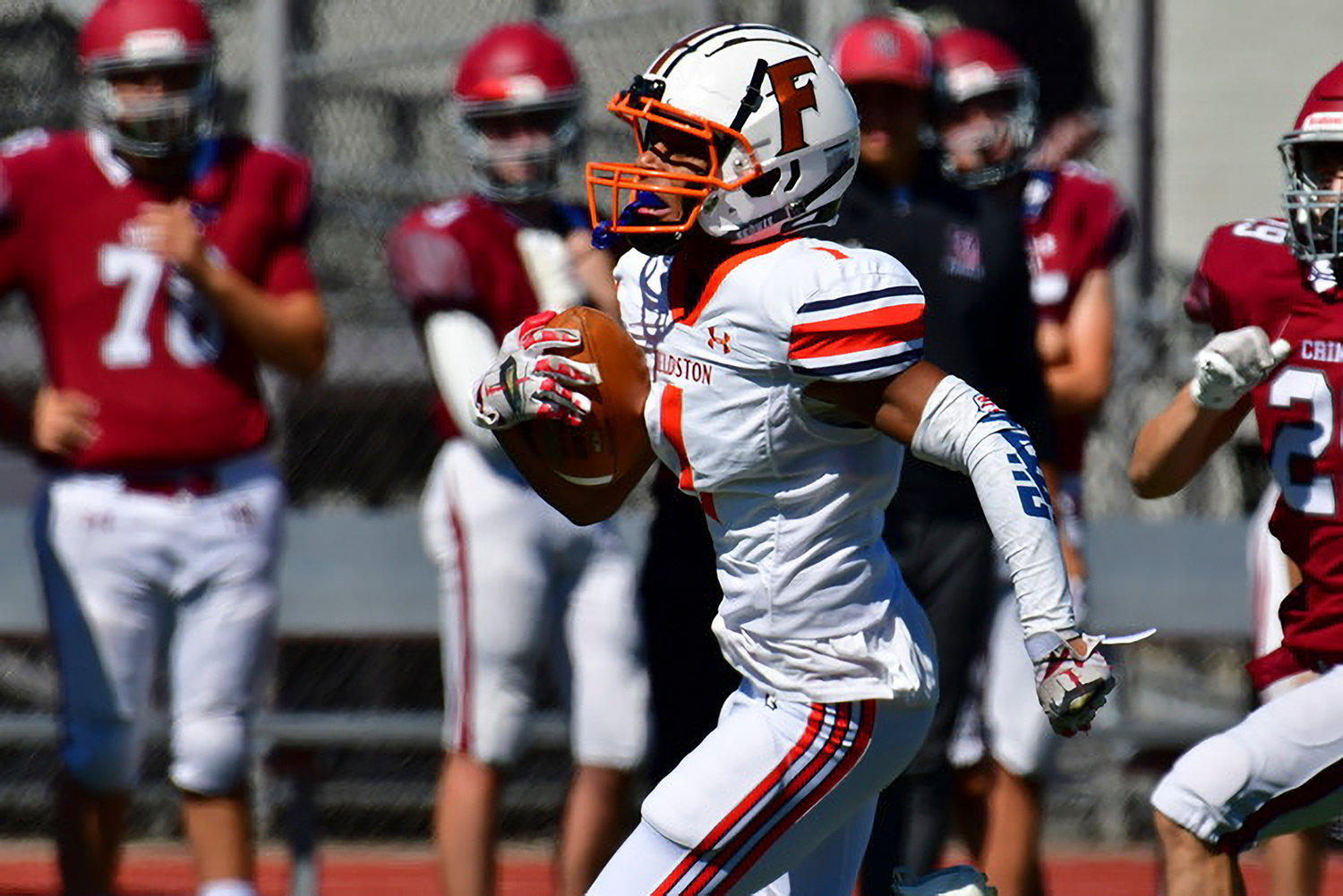 Fieldston’s Jaden Mena racking up some of his 136 all-purpose yards against Morristown-Beard Saturday in a 23-18 loss. He finished with a touchdown.
Gene Assaf
Previous Next
BY MASON MOSES

This past weekend, the Fieldston Eagles (1-2) high school boys football team were rolling along in the first half in their first road test of the year against Morristown-Beard Crimson (2-2) when they ran into a spate of injuries.

For the Eagles, it was too much to overcome in a 23-18 loss. Fieldston went into the second half with a 12-9 lead on the arm of Heiman.

The Eagles offense has been dominant all season, led by Heiman, who finished 7-16 for 153 yards and 2 TDs. The offense opened Saturday’s contest with a dominant opening drive that led to full back Blake Koons (130 all-purpose yards, 1 TD) touchdown reception from Heiman.

The Fieldston defense shut out the Crimson offense for the entire first quarter.

The Eagles offense commanded another impressive drive in the second quarter that ended with a Jaden Mena (136 all-purpose yards) touchdown. Mena, a senior running back, has been a massive playmaker for this offense this season. He connected with Heiman on multiple explosive plays, including a 70-yard reception that set up Koons’ earlier touchdown.

Coming into the contest, the Eagles were already without Quincy Levitt, senior-captain left tackle; and Noah Chriss, junior right guard. The team hopes to have all of these starters back for this weekend.

Sophomore Gideon Bialkin, who was 8-15 for 77 yards for 1 TD and 1 INT, replaced Heiman. Bialkin put together a fourth quarter drive that concluded with a touchdown pass to wide receiver Henry Kaiden.

That got the Eagles back to within 23-18 with limited time left in the game. In the ensuing possession, Rowhan Daly, senior outside linebacker, forced a fumble picked up by outside linebacker Jackson Faurve, which gave Bialkin and the offense a chance to win the football game.

But the Eagles came up short in the end.

Next Saturday, the Eagles will face the Rye Country Day Wildcats during homecoming at 4:15 p.m. Declan Semler, a captain and senior right tackle, says that the team “will learn from this weekend” and will “have more motivation than ever” coming into this Saturday’s match-up.

Riverdale Country Falcons (3-0) continued their dominant start to the season with a 34-27 win over visiting Montclair Kimberley Academy of New Jersey (1-2) as James Spiegel put on a show.

Meanwhile, MKA had its own showstopper in running back J. Ankrah-Jones, who piled up 128 all-purpose yards (24 rushing, 104 receiving) and 2 TDs.

Nic Lembo and Jordan Fishback, who combined to take down Fieldston the previous Saturday, wound up with a total of 159 all-purpose yards (87 yards for Lembo and 72 for Fishback).

Riverdale had a 21-14 halftime lead and was able to hang on as MKA tied the Falcons 13-13 in the second half. But MKA left three points on the field as senior Cameron Sewell blocked a field goal.

The Lions next game is Friday at 7 p.m. in a non-conference home game against Hackley.