Fieldston resident told to fix wall he says isn't his 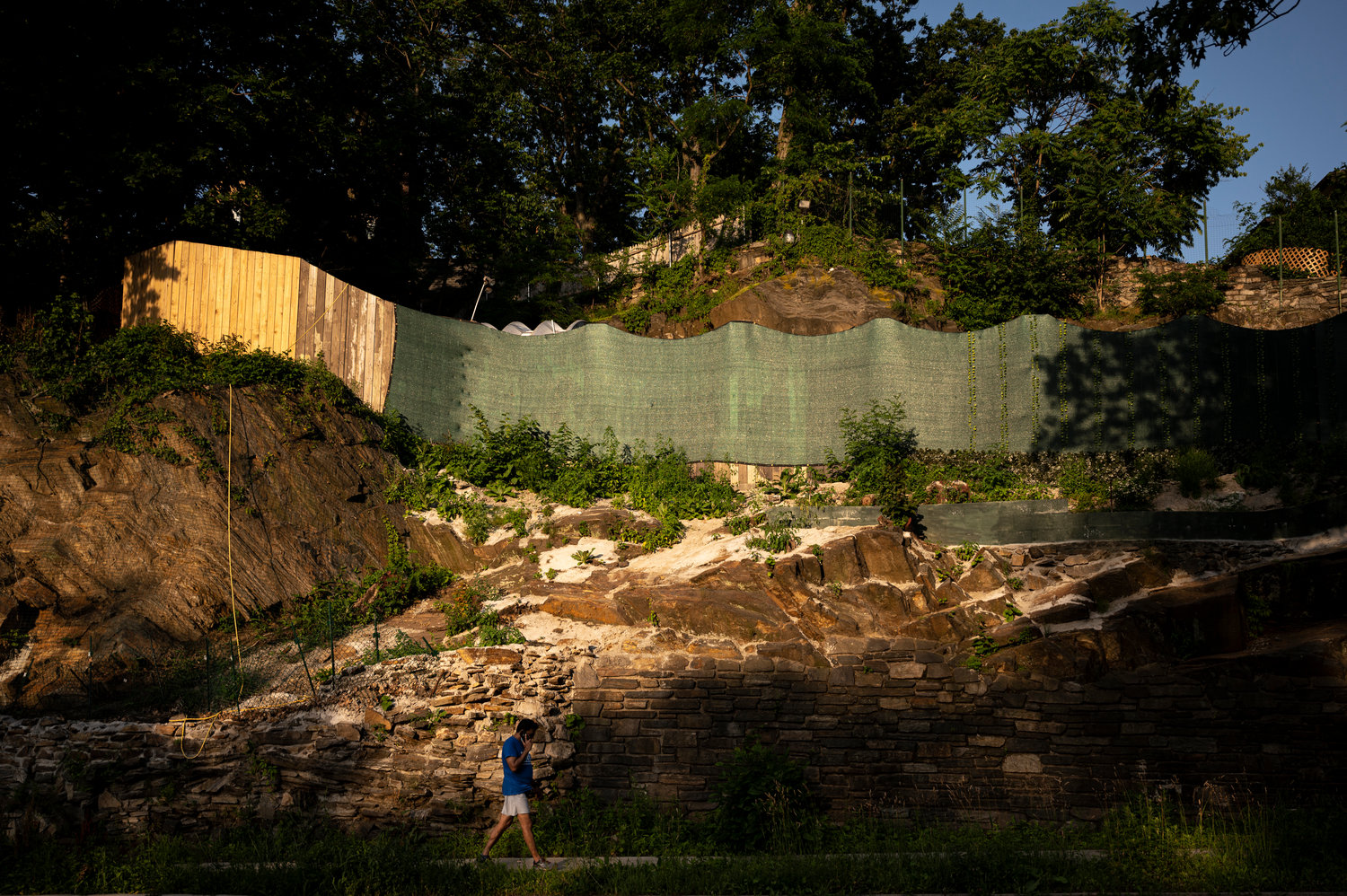 A retaining wall along the Henry Hudson Parkway East service road between West 246th and West 250th streets appears to still be crumbling after a storm last October, and just overall age. But who should fix it seems to be a point of controversy between city officials and a neighbor who lives on top of the small cliff — Alan Rosenthal.
HIRAM ALEJANDRO DURÁN
Support journalism

If you want to see more stories from Joseph, please make your tax-deductible donation today at tinyurl.com/ReportForRiverdale.

City officials aren’t afraid to pass the buck, but could they go as far as passing the wall?

It seems so, at least according to a Fieldston doctor who says the city’s buildings department has harassed him about a crumbling wall along the Henry Hudson Parkway East service road. The problem? Alan Rosenthal says the wall is not his, and he’s already spent thousands of dollars trying to convince the city he’s right.

But it hasn’t been an easy battle, Rosenthal recently told Community Board 8’s land use committee. The buildings department already fined him several times over the past eight months, and there seems to be no end in sight to this battle.

“It’s completely irrational what I’m being subjected to,” Rosenthal said. “I mean, it’s really becoming an emotional, physical issue with me. I had to go to the hospital. I don’t know what else to do.”

The retaining wall lines the sidewalk along the parkway service road, but Rosenthal’s property is on the land above it, along Delafield Avenue. Because of that, the wall doesn’t belong to him, but rather the City of New York.

Rosenthal received his first violation from the buildings department in October after a turbulent storm caused a rockslide from the outcropping, knocking over several trees on the sidewalk. DOB claimed Rosenthal failed to maintain four sections of rock above the retaining wall, which “sheared from (the) bedrock” and fell onto the street, and issued him a $6,250 fine.

Rosenthal was hit with another $1,250 fine last March for not fixing the wall as the buildings department demanded he do. And more fines followed, Rosenthal said, for violations such as removing a tree he said was dead, and was told to remove a border wall he had constructed on his property that attempted to address the outcropping.

Through all of it, however, Rosenthal — who bought his home in 1998 — maintains this property is not his. In an email to The Riverdale Press, the doctor says he’s now spent more than $40,000  “defending claims, violations, and numerous summonses,” as well as hiring “lawyers, surveyors, engineers, consultants and expeditors.”

He even hired Mueser Rutledge Consulting Engineers, a national structural and geological engineering firm, to help him determine once and for all if this rock outcropping and wall is indeed his, or if it actually belongs to the city.

MRCE officials visited the site twice, Rosenthal said, determining his home was “safe, stable, not hazardous or a threat to public safety.”

They also found — although they don’t get the final word — that Rosenthal was not responsible for the rocks found in October, and that the subsequent violations and summonses don’t belong to him,

In addition, he had also reached out to CB8 about the matter.

CB8 land use chair Charles Moerdler says he sympathizes with Rosenthal, and gave him advice on exactly how he could fight the buildings department in these violations.

CB8 has received complaints about rocks falling in that area for several years, Moerdler said.

“People who own those homes up there are immediately tagged for problems with bricks falling down, trees falling down, dirty sidewalk, and broken sidewalk,” the chair said.

Figuring out who’s actually responsible isn’t easy, however, Moerdler warns. The Fieldston Property Owners Association maintains this rock outcropping is outside its historic neighborhood’s perimeter, and thus belongs to the city.

Still, Moerdler says, the FPOA has paid in the past to fix any repairs needed alongside the sidewalk where the wall stands. But even Moerdler believes a series of surveys conducted in the area years ago declared the city to be responsible for this particular area. In fact, when the rocks came down, CB8 reported it to the buildings department, and not any individual household.

“The City of New York owns, under the survey, everything five feet east of the sidewalk. And that was in order to build the Henry Hudson Parkway,” Moerdler told The Press. The city “has never recognized that, has never done anything about it.”

And that was confirmed by Michael Horodniceanu, a  civil and urban engineering department professor at the New York University Tandon School of Engineering, Moerdler said. Horodniceanu concluded the area belonged to the city, not Rosenthal.

“I called and wrote to the Department of Buildings and said this is wrong,” Moerdler said. “You guys keep peppering him with summonses — one after the other — and instead of paying any attention to it, they gave him more summonses.”

“And for the record, in our view, the board’s view and my personal view, it is pure, unacceptable harassment by the city of New York and the department of investigations ought to investigate the building department fully and thoroughly for it,” he said. “It’s a clear act of misconduct by the department.”

Moerdler said he plans to file a formal complaint with the city’s investigations department.

A spokesman for the buildings department told The Press that Rosenthal disputed his claims in court, and that an independent judge from the city's administrative trials and hearings office  upheld the violations.

“From (West) 246th to 252nd, there are serious, serious issues going on right now with this property that’s affecting our community,” Rosenthal told the land use committee. “I feel — and I hate to use the word — hunted by the DOB inspectors that are knocking on my door at 8 o’clock at night claiming that this is my property, which it’s not my property.”

This story was updated June 28 at 6 p.m., to include comment from the city's buildings department.