A fight? A dance? Capoeira is both 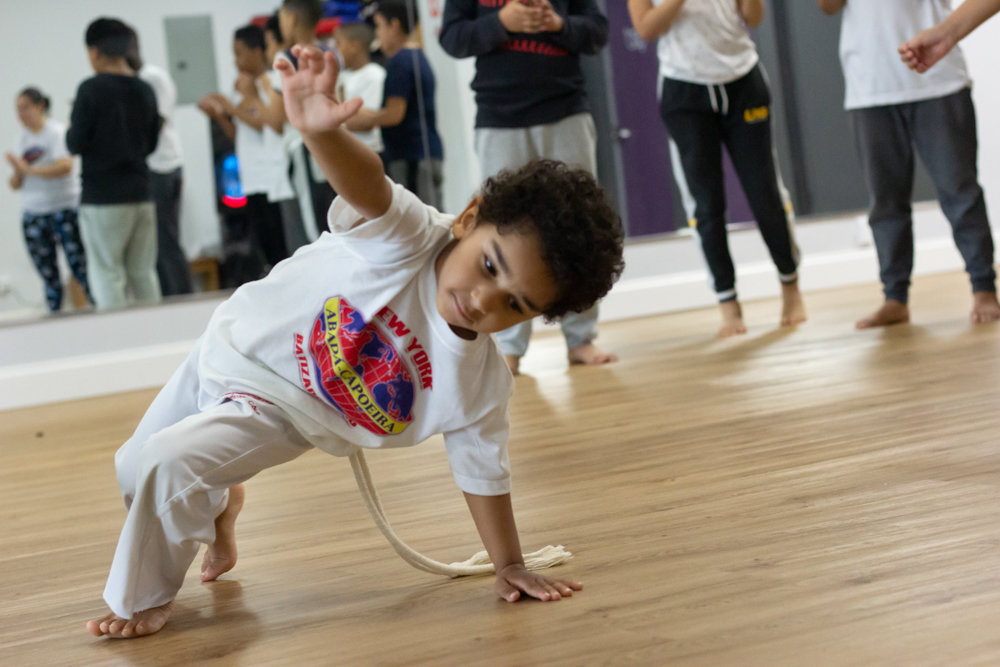 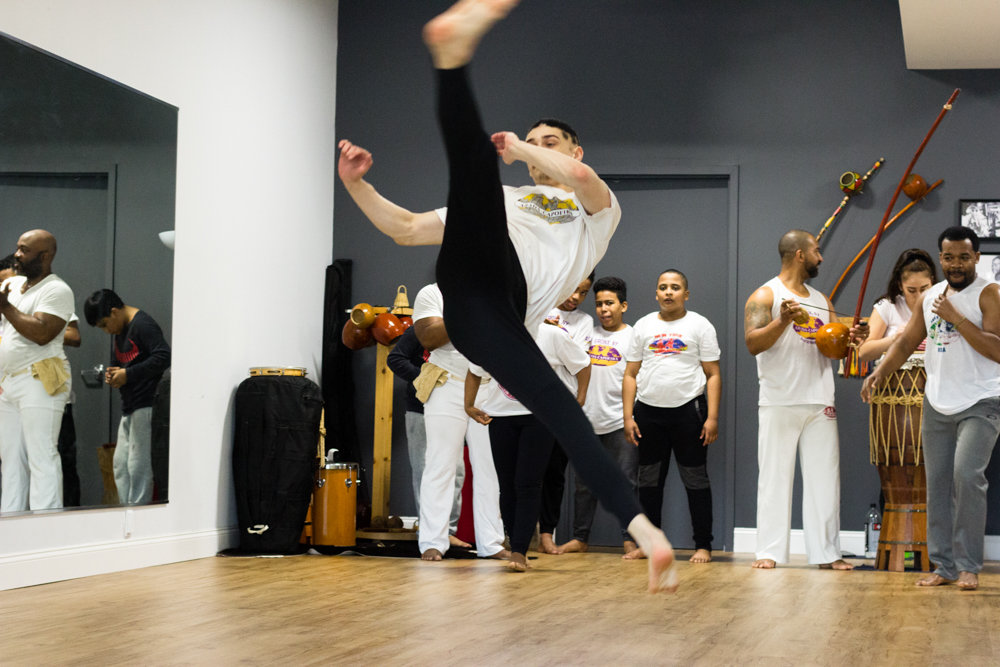 Brandon Taft executes the ‘armada com martelo,’ a jumping spinning kick and one of the most difficult moves in capoeira, at ABADÁ-Capoeira Bronx. In the studio, he goes by the nickname ‘Gasparzinho.’
FRIDA STERENBERG 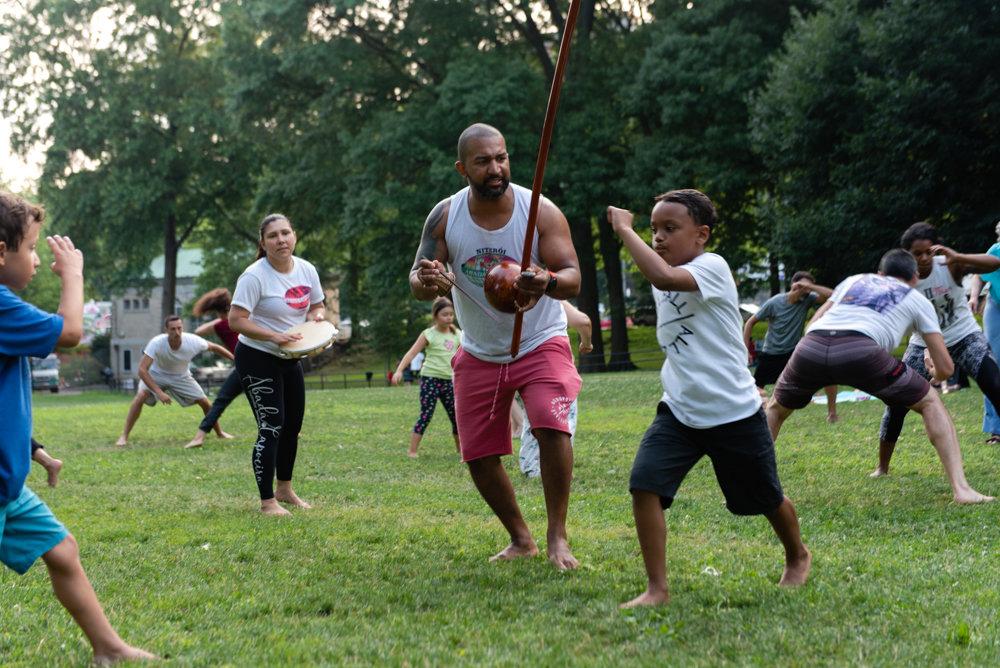 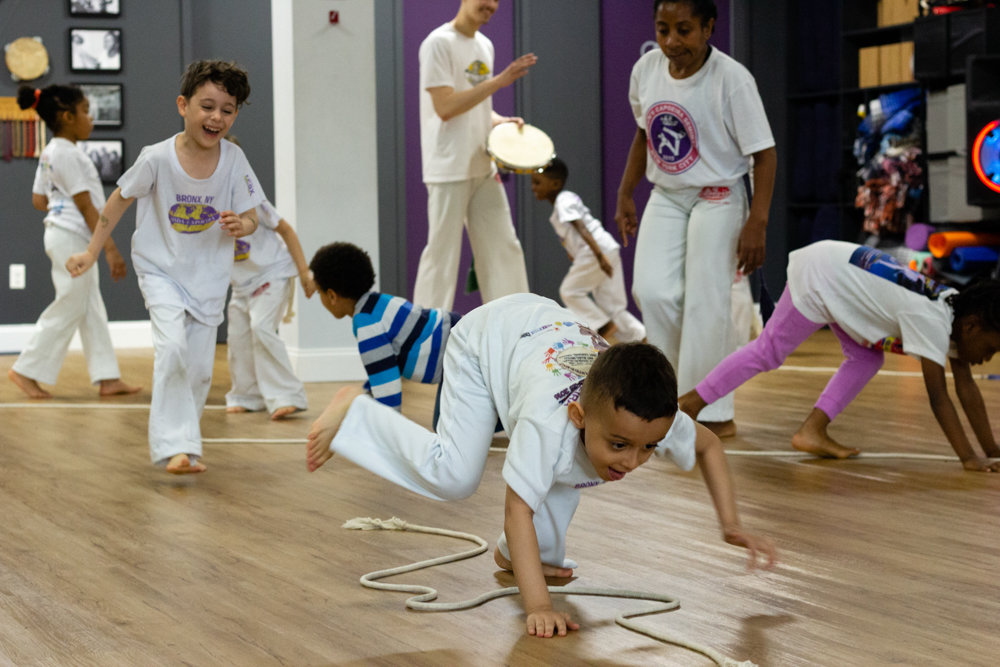 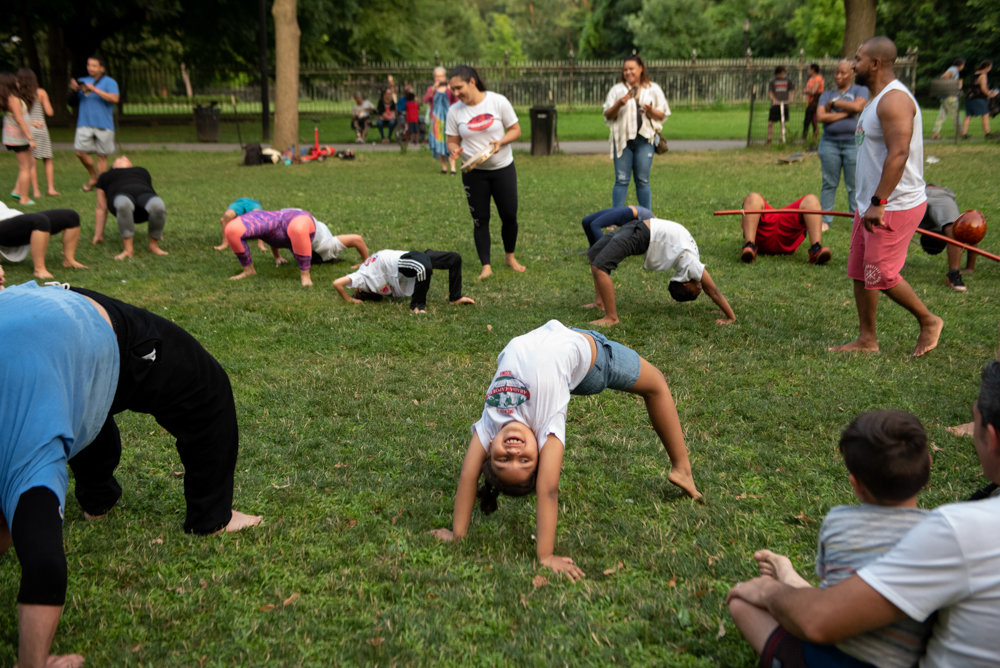 Children and adults practice backbends during an outdoor capoeira session in Van Cortlandt Park run by the owners of ABADÁ-Capoeira Bronx. 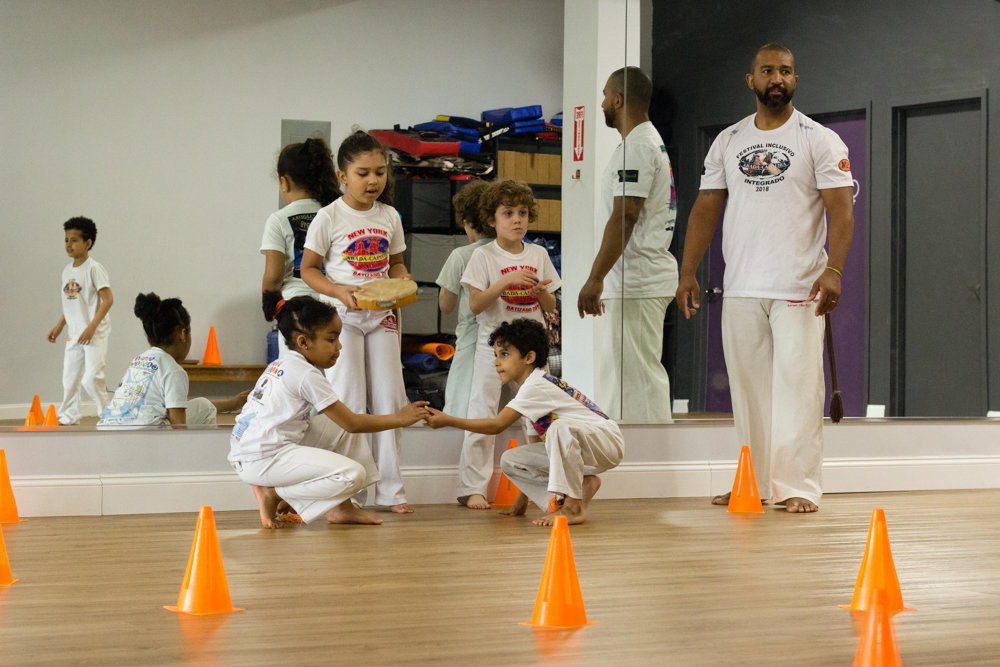 Marcelo Fagundes, right, teaches his students how to initiate a game of capoeira in his ABADÁ-Capoeira Bronx studio.
FRIDA STERENBERG 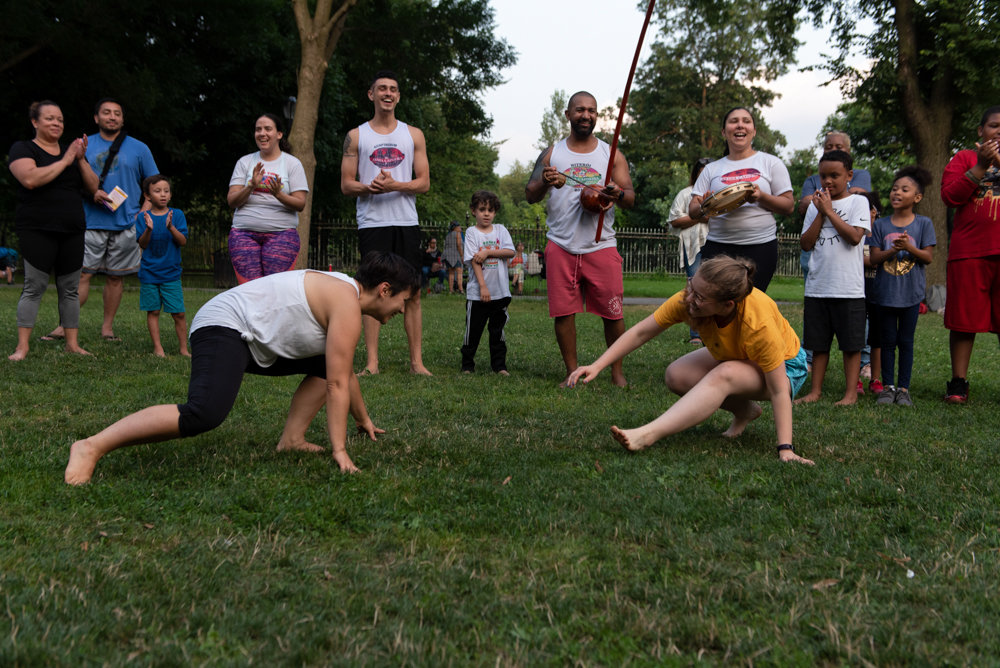 That’s how Jennifer Sanchez describes the historical origins of an art form she and husband Marcelo Fagundes are keeping alive in the Bronx.

Some think of it as a fight, others as a dance. Really, it’s both.

“Bringing capoeira to the Bronx, it’s just like a match made in heaven,” Sanchez said. “Not only because of the cultural diversity that exists in the Bronx — with a lot of black and Latino kids — but because capoeira can offer something for everyone.”

Sanchez and Fagundes are the founders of ABADÁ-Capoeira Bronx, a studio space nestled under the 1 train station at West 242nd Street. It is also the only capoeira school in the borough.

“There is a need here for things like capoeira,” Sanchez said, “specifically ones that kids can actively engage and connect.”

Sanchez and Fagundes began teaching capoeira classes at the Episcopal Church of the Mediator on West 231st Street in 2010. They opened their first studio in 2017 on Manhattan College Parkway before moving to their current location on Broadway.

They became a non-profit organization in 2017, which has helped them seek funding available for programs that support youth development. The studio is part of a global network of ABADÁ-Capoeira schools that was founded in Brazil in 1988 by capoeira master José Tadeu Carneiro Cardoso, also known as Mestre Camisa.

Capoeira is an Afro-Brazilian martial art that involves dance, music, acrobatics and language. Created 500 years ago by slaves brought from Africa to work in sugar cane plantations, it evolved as a form of self-defense skillfully disguised as a dance.

Capoeira empowered many to revolt against their oppressors and flee the plantations. Runaway slaves continued to spread its teachings, but even after slavery ended in Brazil in 1822, capoeira was still illegal and marginal.

Only in the 20th century did it became part of the mainstream cultural heritage. Now, capoeira is practiced all over the world, and is one of the major exports of Brazilian culture and the Portuguese language.

On any given Saturday morning, parents lean against the studio’s large windows as they watch their kids, some as young as 4 years old and all dressed in white, do capoeira drills. They run around, jump, do cartwheels, and play the pandeiro, the Brazilian version of a tambourine.

For a moment of relaxation, the kids lay down on the floor as Fagundes walks around the room strumming the berimbau, an instrument made of a curved stick and a thick string with a hollowed gourd at the bottom.

After a few minutes of gentle music, he invites them to stand up and create a circle, a roda in Portuguese.

“Capoeira is a conversation,” Fagundes tells his students. “Partners need to be close, inhabit the same space. How many eyes do you have in capoeira?”

“One hundred,” screams another.

“You have eight eyes in capoeira,” said Fagundes, known to his students as Professor Côco, as he points to different areas around the head and neck.

“Look at your partner all the time so they don’t kick you, and you can use your reflexes to dodge.”

Capoeiristas maintain the old tradition of receiving nicknames from their peers inspired by their personalities or physical attributes. It is a custom going back to the times when capoeira was a clandestine activity and players needed to hide their identities. Côco, Fagundes’s capoeira name, means “coconut,” and refers to the shape of his head.

The pounding of the atabaque, a type of African drum, and the shaking of the pandeiro create a percussive soundscape as two kids squat just below the instruments.

Once the berimbau is lowered between two capoeiristas, the kids know that’s their cue to begin the game, as a round of capoeira is called. They start with a cartwheel-like move called the aú.

The earlier drills are what they now perform as a flowing fight-dance as everyone around them in a circle sings and claps. After a few minutes, people begin to rotate into and out of the circle. The flow and grace of some capoeira moves alternate with menacing fast kicks that almost make the players clash with each other.

This can be a dangerous game. An adult doing those same moves can inflict a serious blow to a partner if the tacit dialogue of their gaze, which is supposed to keep them from touching each other, is somehow broken.

Why people get into it

There isn’t just one reason why someone might get into capoeira. It could be curiosity, personal history, or even just a fondness for dance.

Joanna Rhoden-Plaza saw an opportunity in capoeira for her two sons.

“My older son Jeremiah loves to dance and he said he liked breakdancing,” she said. “His dance moves reminded me of a lot of the moves that I saw in capoeira. I thought it would be a natural fit.”

Sadio Jonas tapped into her own history as a capoeirista to get her children involved.

“It was a community,” Jonas recalls. “It was a way of life. It was a philosophy that I take with me into the real world throughout my life.”

Her husband is from the Congo, and that was another reason for bringing her kids over.

“There is a lot of Congo culture that was passed into capoeira,” Jonas said. “It was important for me to have them learn all of that as well.”

Andrew Averill is a capoeirista and a high school English teacher at College Academy in Washington Heights. In the Bronx studio, he goes by Cobre, which means “copper,” reflecting his red hair.

“Capoeira has brought a lot of challenge and rewards my way,” Averill said, “so I wanted the same for my students.”

Averill wrote a grant with Sanchez so that Fagundes could come to his school to teach capoeira to his students.

“Capoeira brings a unique blend of language, culture, movement and music, all of which help us feel our place in the world,” Averill said. “I would love for my students to experience the broadening of their worldview that capoeira can bring.”

Sanchez and Fagundes teach both in the studio and in classrooms throughout the city, helping to bring the joy and athleticism of capoeira to students who may not necessarily be able to reach their northwest Bronx outpost.

For a special trip in the spring, Sanchez brought middle school students from M.S. 390 in the South Bronx to the studio for a proper class with more experienced capoeiristas. Sanchez had been teaching them in a weekly after-school program, and wanted to give them the full experience.

Seeing students get into it for the first time taps into Sanchez’s and Fagundes’ own capoeira origin stories.

Fagundes got his start back home in the Brazilian city of Curitiba at the age of 9 thanks to a free class. Like Fagundes, Sanchez — who hails from the Dominican Republic — also discovered capoeira through a free class, although she was a student at Hunter College at the time.

“Had I not had the chance to take a free class, I probably would have never been able to do capoeira,” Sanchez said. “It was something that I didn’t have access to.”

Sanchez, Fagundes and a select group of students will head to Brazil on Aug. 16 for the annual International Congress and World Games of Capoeira in Rio de Janeiro. It’s that level of reach and access that is a constant source of motivation for Sanchez.

“The fact that now I’m able to do something where other people can have the same form of access,” Sanchez said, “it’s really what gives me pleasure in doing what we’re doing here.”