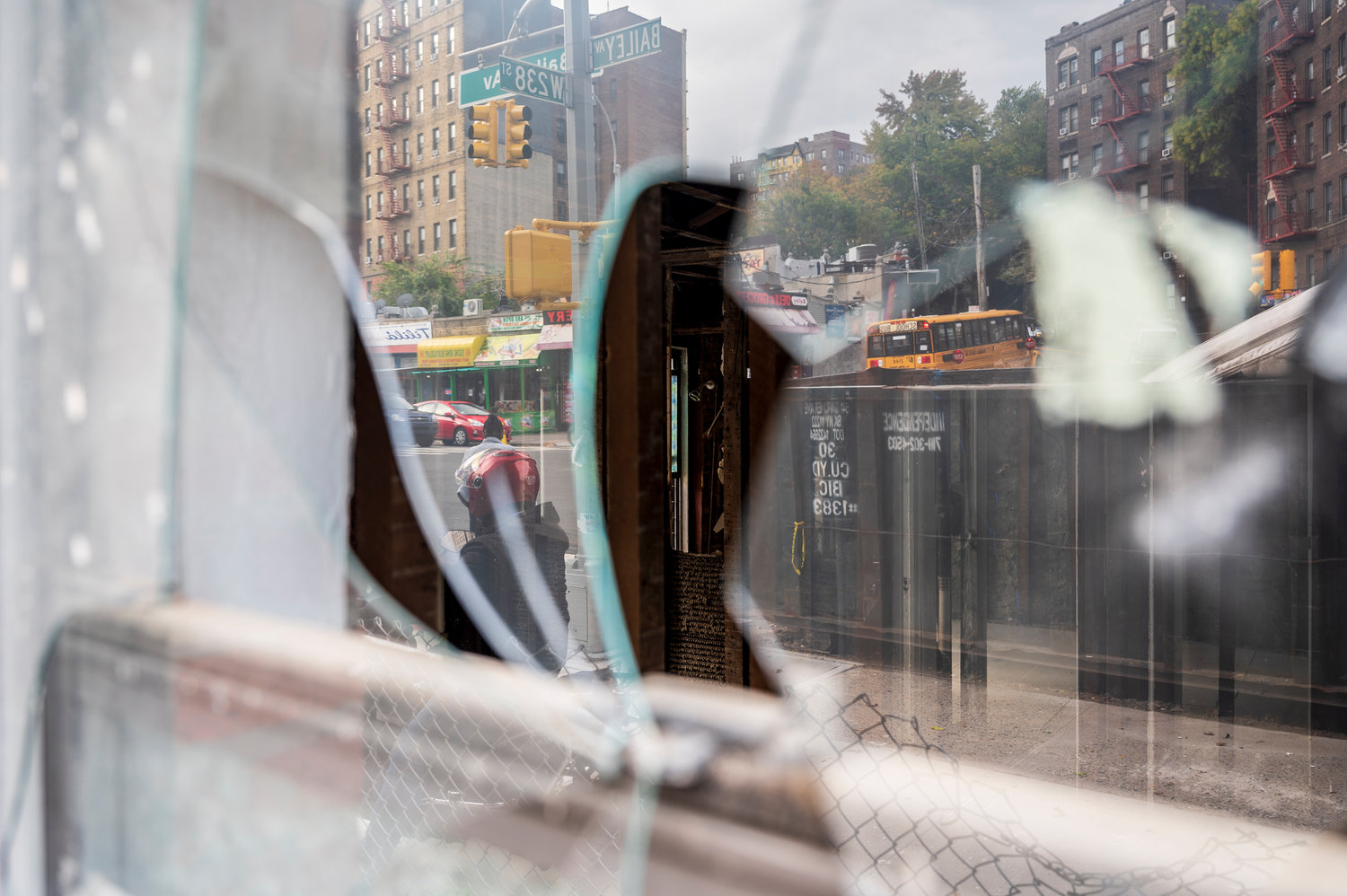 The gutted interior of a ground-level apartment at 181 W. 238th St., is one of several damaged or destroyed by a fire on the building’s fourth floor that has displaced a number of tenants with no word on when they might return.
HIRAM ALEJANDRO DURÁN 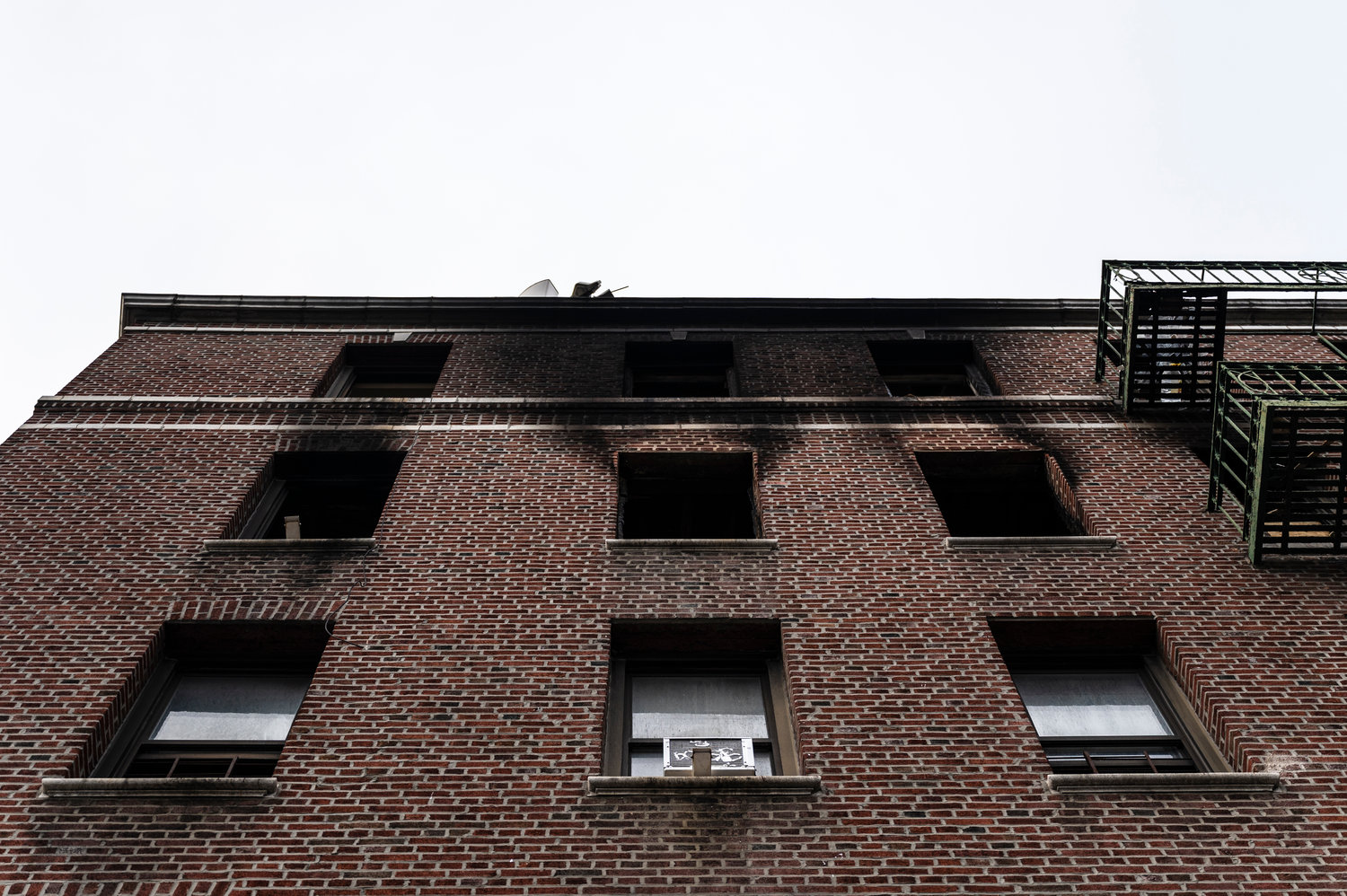 Soot on the exterior of the top two floors of 181 W. 238th St., tell us all we need to know about what happened last September when a blaze damaged or destroyed more than a dozen units, with many of those tenants still not sure on when they might be able to return.
HIRAM ALEJANDRO DURÁN 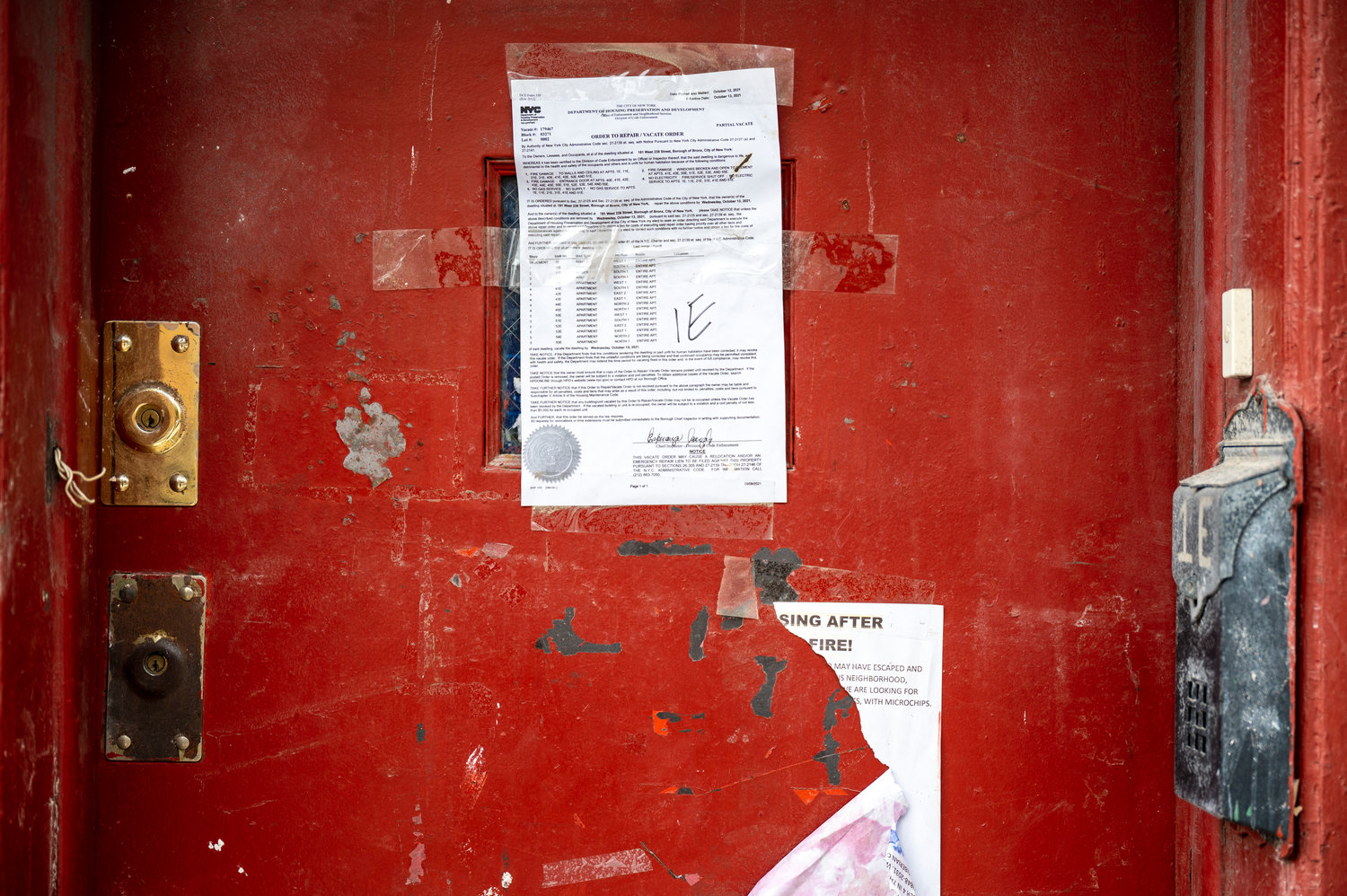 An order to vacate 16 apartment units posted on one of the doors at 181 W. 238th St., following a large fire back in September. Tenants have yet to receive word from the building’s landlord on when they might be able to return.
HIRAM ALEJANDRO DURÃN
Previous Next
Support journalism

Lillian Vasquez hopes to be home for the holidays. Unfortunately, it’s looking less likely that will be the case since her apartment is just as shambled as it was the day after it and 15 other units at 181 W. 238th St., were ravaged by fire.

Yet, it was more water than flames that wreaked havoc on Vasquez’s apartment during the Sept. 29 blaze. But that doesn’t make her situation any less frustrating.

“I’m stressed out,” she said. “This is taking a toll on my health.”

It’s been more than a month, yet Vasquez and her neighbors are still locked out of their homes. And there’s no indication on when they might be able to return.

“We’re going through a lot,” she said. “I speak for me and the rest of the tenants there. We took a loss. I lost everything in my apartment.”

Vasquez lives two flights below the unit where the fire began in the middle of the Wednesday night. But she was still close enough to have her life turned upside down — and she says she’s lucky to have even made it out alive in the first place.

“I’d say if there was an angel out there, it was a gentleman out there on the block,” she said.

That gentleman happened to be walking by the building on the corner of West 238th and Bailey Avenue when he first noticed the flames coming from one of the units. He ran to as many doors as he could, Vasquez said, knocking and ringing bells.

He even physically helped some out of the building before firefighters arrived.

For Vasquez, the whole incident felt “something like an explosion.”

“It just happened so fast,” she said. “It busted out some of the windows.”

The New York Fire Department has not yet determined what caused the fire, and it remains under investigation. The city’s buildings department issued vacate orders for a number of residents on the building’s fourth and fifth floors, as well as several apartments on the lower floors.

Many of the displaced tenants who have nowhere to go, Vasquez said. With winter just around the corner, it’s a hardship virtually no one was expecting.

“A number of us are actually homeless, to tell you the truth,” Vasquez said. “And it’s hard. You can’t find a place to live.”

Vasquez has lived in her rent-stabilized unit for decades, and she’s practically a complete stranger to all the nuances of looking for and eventually qualifying for a New York City apartment today — like the upfront cash required, new income qualifications, and a credit background check.

“We had to take whatever we could salvage out of that apartment,” Vasquez said. “It took me about five days to take all I could. But there wasn’t much that I could take out except for some wet pictures and a few other things. I had to leave everything else behind, including all my furniture. The bed and mattress were still soaked.”

Vasquez first stayed with her brother in the days after the fire. But because of her pet, that stay could only be temporary. Now Vasquez and her boyfriend are staying at his daughter’s apartment until the couple can figure things out.

“There’s no problem where I’m staying,” she said. “It’s just uncomfortable. There’s nothing like your own place, and I need my privacy.”

Vasquez recently returned to work a few blocks from where she’s supposed to live at the BJ’s Wholesale Club down on Broadway. Getting to work is a bit harder now since she’s not as close to her job as she was with her old place

Vasquez now has to commute rather than walk. And her patience is running out.

“Right now, I’m looking for an apartment,” she said. “I never thought that it would be this difficult to find an apartment. And I’m working with a real estate agency.”

And if Vasquez can’t find an apartment to rent, she’s willing to try something new.

“I’m at a point where I just applied for a pre-approval from a bank because I’m ready to buy something just to have my own place,” she said. “I need to get somewhere.”

But if that somewhere is her old home at 181 W. 238th, she doesn’t have any idea on when that might be. Vasquez says the landlord has not been in touch with her or any of her displaced neighbors. As far as she knows, he has not been at the building since the fire first broke out, and he’s not returning phone calls.

The landlord also did not return a call seeking comment from The Riverdale Press.

The lack of communication has Vasquez so worried, she’s hired an attorney. Her concern is that because her apartment is rent-stabilized, it may encourage the landlord to drag his feet when it comes to repairs.

The landlord — who Vasquez only knows as “Belkis” — came on board after the building’s current owner, Allerton-based Kujtim Realty, purchased it for $12.5 million in 2017.

The buildings department issued a work permit to Aranda Plumbing and Heating on Oct. 22 to make repairs, which leads Vasquez and her neighbors to believe that the landlord is doing some repairs. But even as late as this past week, after a four-alarm blaze swept through a number of businesses across the street, it seemed more attention was being spent gutting the affected apartments than doing any other work.

Still, tenants have no idea when or if they’ll be able to return anytime soon.

“He should have more respect for us tenants,” Vasquez said. “We all paid our rent during the pandemic. We all have good-paying jobs, and we’re all working people. We don’t give him any trouble.”