Forever a hockey player at heart

Jim Breidenbach makes the best of pandemic, keeping a positive vibe in neighborhood 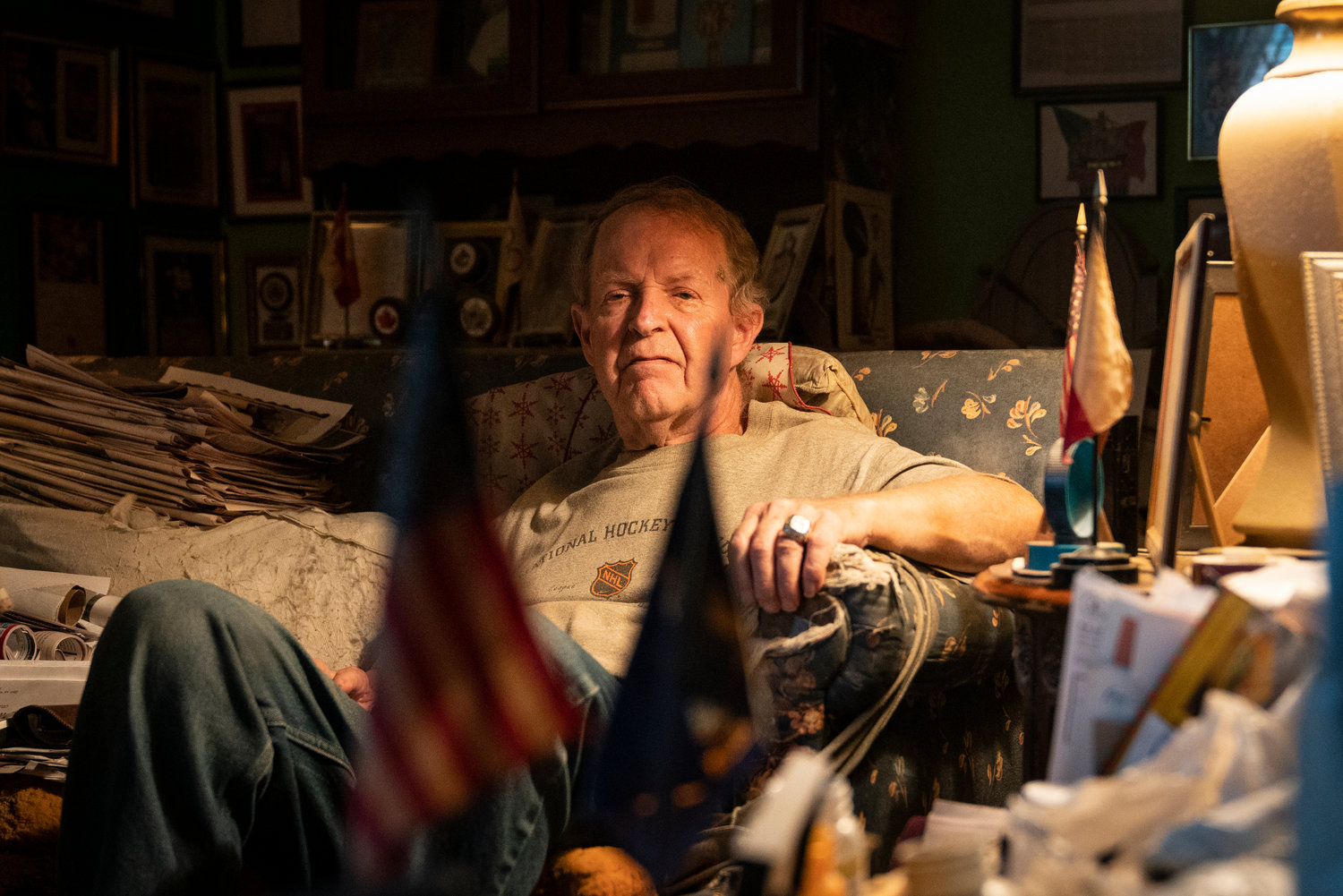 Jim Breidenbach’s life revolves around hockey, having played the game for nearly half a century before moving off-ice as an official for the National Hockey League. His love for the game started after finding out a few New York Rangers players lived in the same apartment building he did growing up.
HIRAM ALEJANDRO DURAN 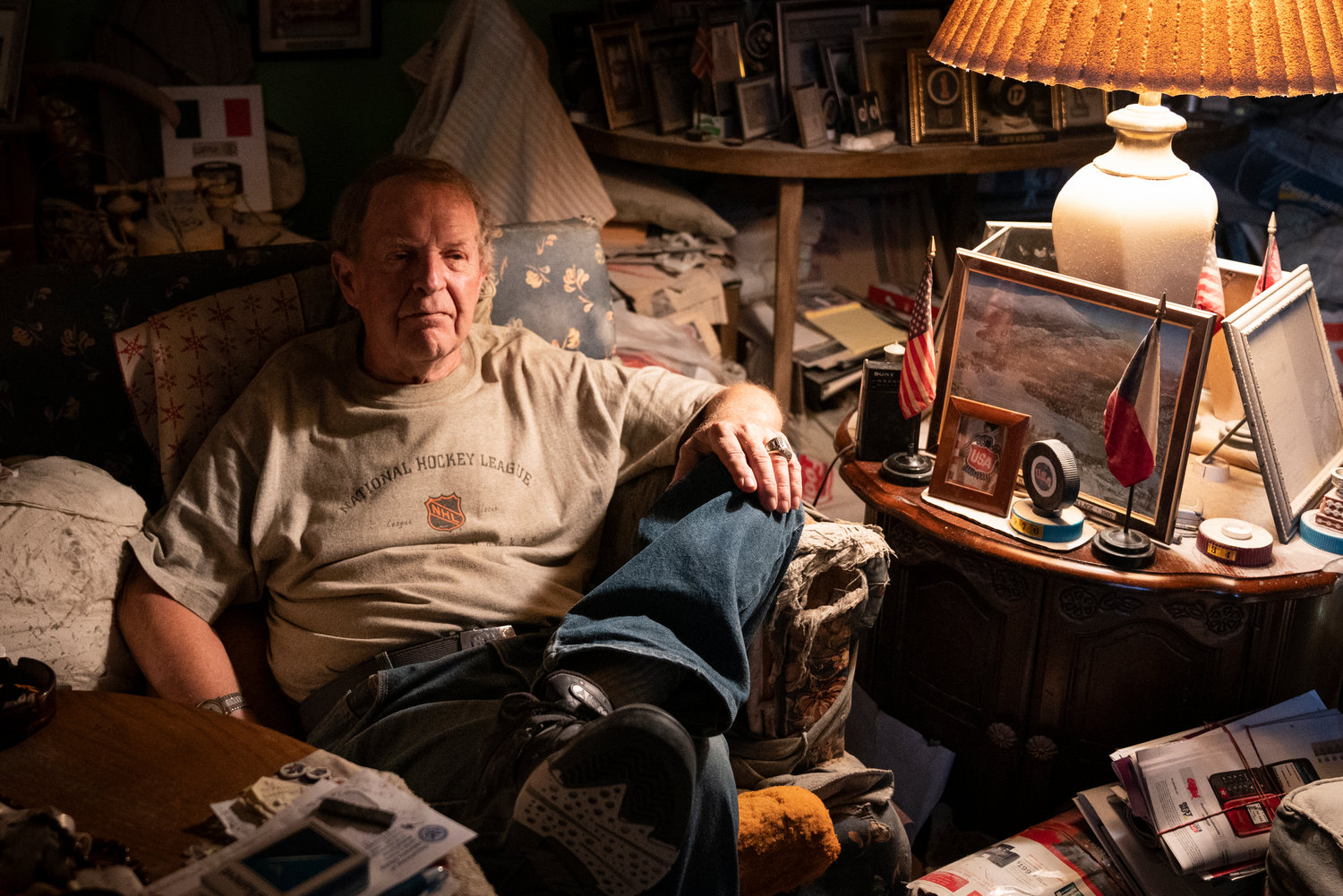 In addition to being a hockey lover, Jim Breidenbach also served in the U.S. Navy, stationed in Iceland during the Vietnam War. While overseas, Breidenbach organized hockey games among fellow servicemen in his barracks as a way to stay connected to the game of his dreams.
HIRAM ALEJANDRO DURAN 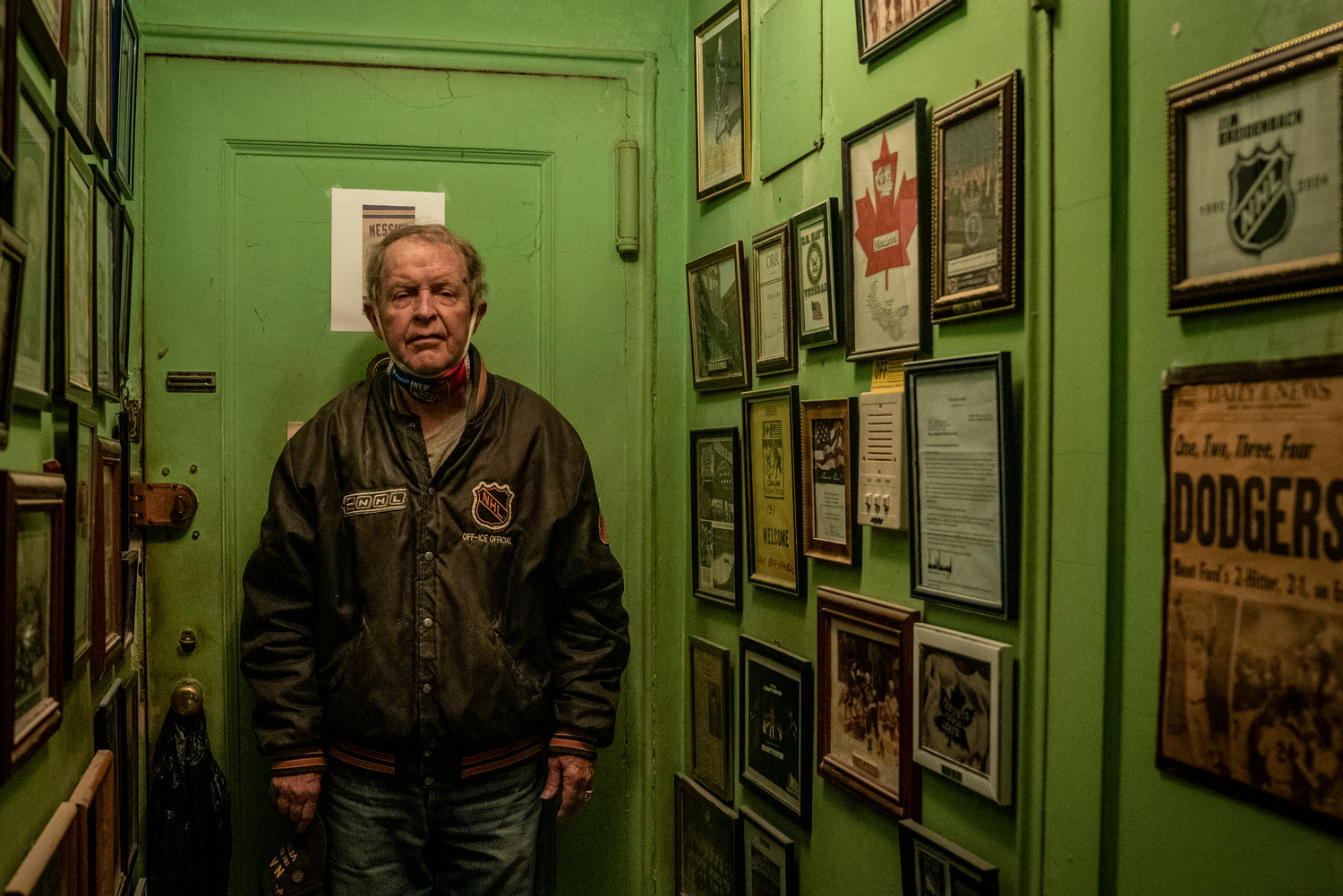 When he’s not at the grocery story or at the VA Medical Center for his check-ups, Jim Breidenbach can be found chatting it up with neighbors outside his home. During the coronavirus pandemic, these conversations have taken place a safe distance apart.
HIRAM ALEJANDRO DURAN 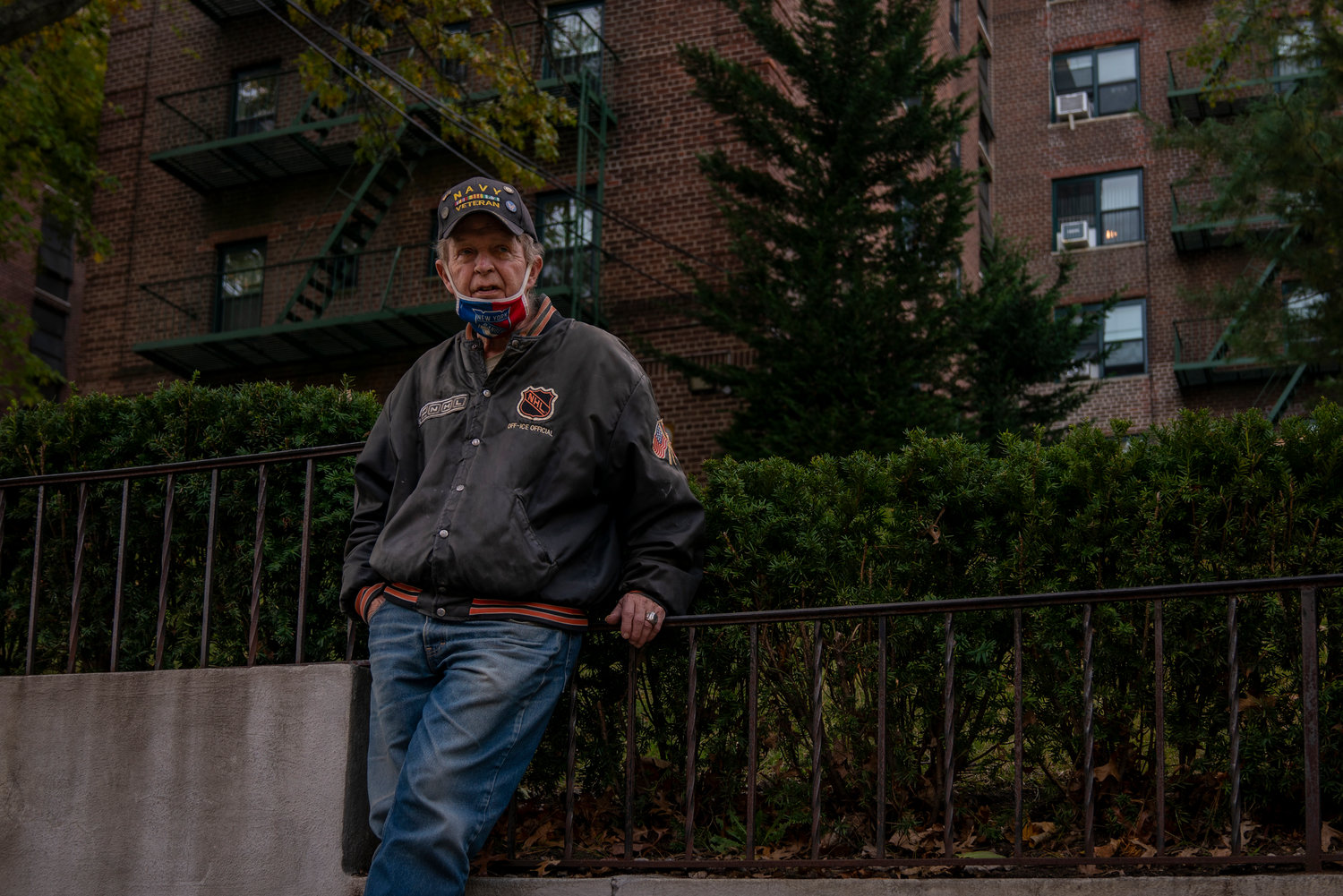 Jim Breidenbach has two favorite memories from his hockey career: Watching the New York Rangers win the Stanley Cup in 1994, and getting to try out for the U.S. Olympic Team in advance of the 1980 Winter Games in Lake Placid.
HIRAM ALEJANDRO DURAN 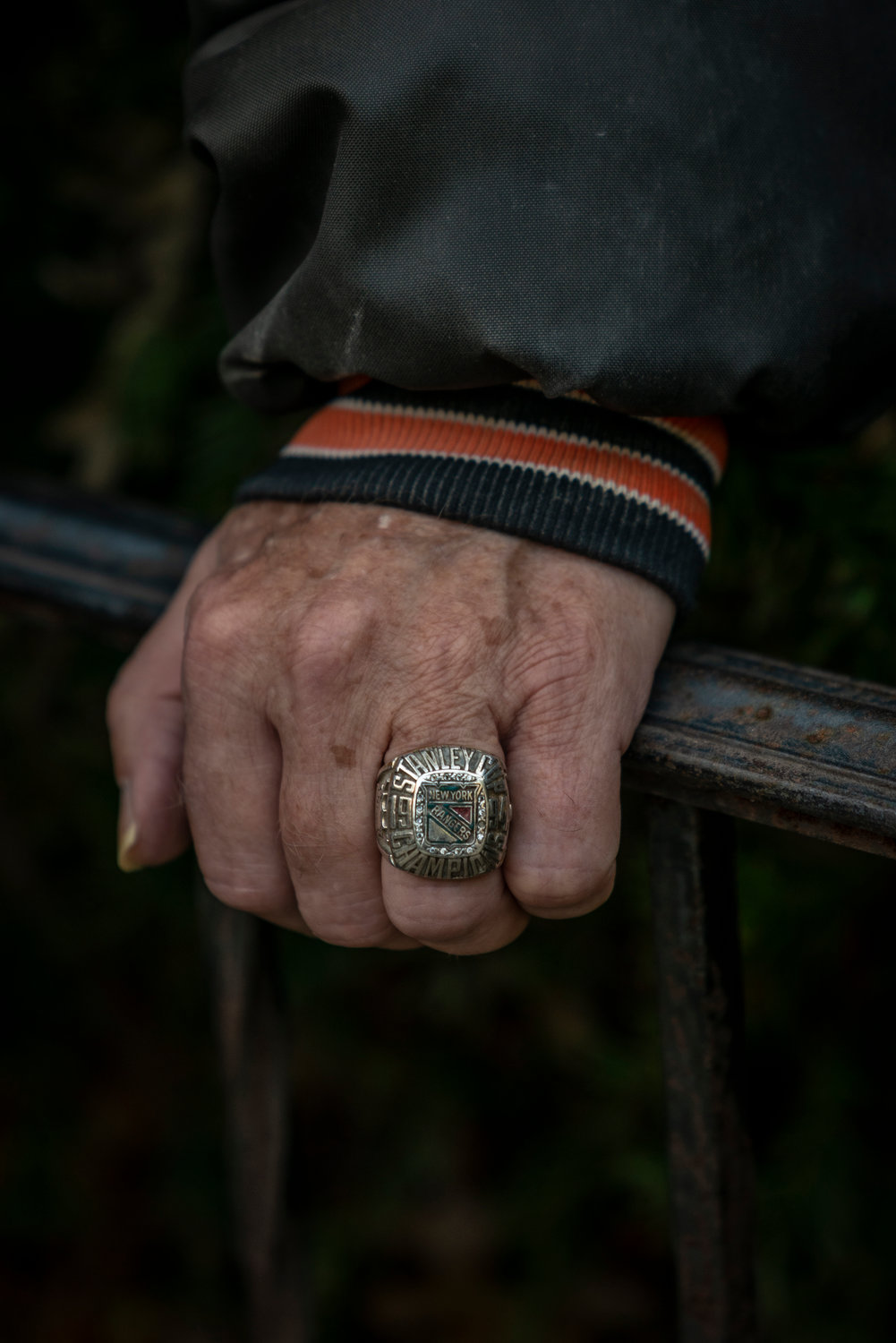 Jim Breidenbach grew up in Queens, but has lived in Riverdale since 1959. Breidenbach’s favorite hockey memories include visits to the rink at Van Cortlandt Park, as well as Kelton’s Tennis and Ice Skating Rink, which closed in 1983.
HIRAM ALEJANDRO DURAN
Previous Next
By PETE JANNY

Some things in life are always constant, no matter what reality tries to throw at it. Like the coronavirus.

Jim Breidenbach in particular knows how to stay positive amidst a crisis, and because of that, he stays true to the constant fixtures in life worth living for. At 73, Breidenbach does his best to keep himself busy, with a lot of his focus in the COVID-19 working brightening up the days of others around him.

He’s lived in Riverdale more than 60 years, and is no stranger to his neighborhood’s streets. Breidenbach often greets others with a wave and smile, regardless of whether it’s a close friend or a total stranger.

“He’s outside almost every night and people pass by to say hello to him,” said Ray Castiglia, who lives near Breidenbach’s Netherland Avenue home. “Everybody gets along with him.”

At the center of Breidenbach’s life, however, isn’t neighbors or a new face wandering into his path. No, for Breidenbach, the true “love of his life” is the game of hockey.

As a young boy in Queens, Breidenbach was introduced to the slippery sport after learning a few New York Rangers players lived in the same Bayside apartment complex his family did.

“Matter of fact, there was a guy named Earl Ingarfield Sr., who played for the Rangers, and we would see him all the time in his Rangers jacket,” Breidenbach said of the center, who played some 20 years between the Rangers and the Pittsburgh Penguins.

From then on, Breidenbach never had a second thought about playing the bruising sport, especially once his mother bought him his first pair of ice skates.

By the time he was a teenager, Breidenbach’s had moved to Riverdale, and it was here he formed some of his fondest memories as a hockey player. He made frequent visits to the rink at Van Cortlandt Park as well as to Kelton’s Tennis and Ice Skating Rink, which ultimately shuttered its Broadway and West 236th Street doors in 1983.

“You love the sport so much you just went out and played it and didn’t really worry about the time,” Breidenbach said. “The only time you looked at was the game clock.”

But Breidenbach’s game experiences were not limited to just Riverdale.

Ahead of the 1980 Winter Olympic Games in Lake Placid, Breidenbach traveled to Danvers, Massachusetts to try out for the Olympic hockey team. Although Breidenbach didn’t make the cut, he enjoyed competing against players that would eventually comprise of the “Miracle on Ice” team that upset the Soviet Union for the gold medal in Lake Placid.

“I was there for about a day and a half, which surprised me because those guys were really good,” Breidenbach said. “Just for the experience of doing it and something always to remember and the fact that they beat the Soviets always stands out in my mind.”

Breidenbach also played internationally while stationed with the U.S. Navy in Iceland. There, during the Vietnam War, he’d organize pick-up games among 20 or so fellow servicemen in his barracks. Even today, as a proud veteran, Breidenbach sports a Navy hat which, of course, complements his NHL jacket.

Once age forced Breidenbach off the ice, he found a new outlet to express his love for hockey — and it was a dream come true.

For 14 years beginning in 1990, Breidenbach was an off-ice NHL official during Rangers games at Madison Square Garden. He got the job after a friend introduced him to John Amirante, the Rangers’ national anthem voice for decades. Working alongside 14 other off-ice officials every game, Breidenbach got to watch the action up close and from different angles.

Of course,  the best moment came in 1994 when witnessed firsthand his beloved Rangers winning their first Stanley Cup championship in more than 50 years.

“I was a statistician in the early years, and when I did the visiting team, I used to operate the shot clock upstairs,” Breidenbach said. “When I did the scoreboard, it was fun doing that because you were putting up the penalties and the goals.”

Even today, Breidenbach feels an intense romance with the game he played for 47 years, mainly as a goalie. The large display of hockey-related hardware and memorabilia in his home sums it all up for him.

“I have pictures taken with some legendary players,” Breidenbach said. “The ones that stand out are my pictures with Gordie Howe, Wayne Gretzky, and Mario Lemieux.”

Life after hockey has been good to Breidenbach, who jokes he’d be married for 25 years already if it weren’t for his lifelong commitment to the sport. Nowadays, he spends time with friends a few days a week, and their favorite topic of conversation is, fittingly, sports.

There’s also the occasional grocery store trip, getting him out of the house and into the neighborhood where he can catch up with neighbors — from a safe distance at least.

“We don’t have big crowds, maybe just two or three of us now,” Breidenbach said. “When we’re out, we are six feet apart because we’ve seen the results and we know what could happen.”

Breidenbach encourages young people to stay patient and open-minded as they deal with the volatility of going to school amidst great uncertainty. Similar to how he found hockey, Breidenbach wants others to strive for what makes them happy in life, because those are the things worth living for.

“What young kids should do is find what they like and stay with it,” Breidenbach said. “They should just follow the advice of good people who could put them in the right direction.”

Breidenbach is proud to call Riverdale home. The spirit of the neighborhood and the quality of its people is what helps make it special to him — even during this weird day and age of wearing masks and social distancing.

“Riverdale’s great. This has got to be one of the best neighborhoods in the country, and the people up here are great,” Breidenbach said. “I get to know everybody on the street here on Netherland Avenue, and they are fantastic people.”