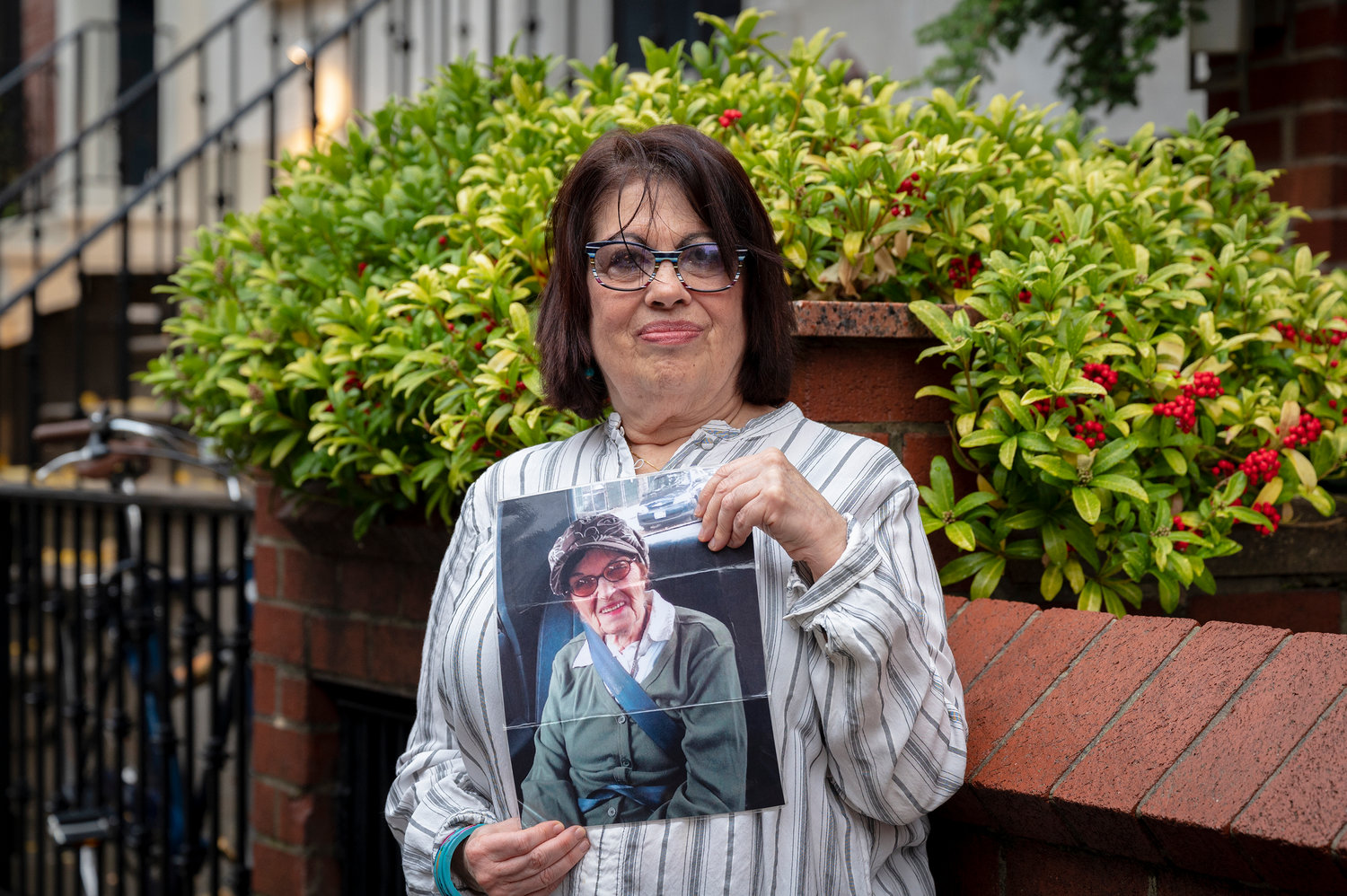 Irma Rosenblatt lost her mom, Ida, in a car crash in 2019. She now pushes for better safety on New York City streets, where more than 4,000 people are injured — every month. Traffic calming advocates hope to enlist faith leaders in their cause as a new administration takes office.
HIRAM ALEJANDRO DURÃN 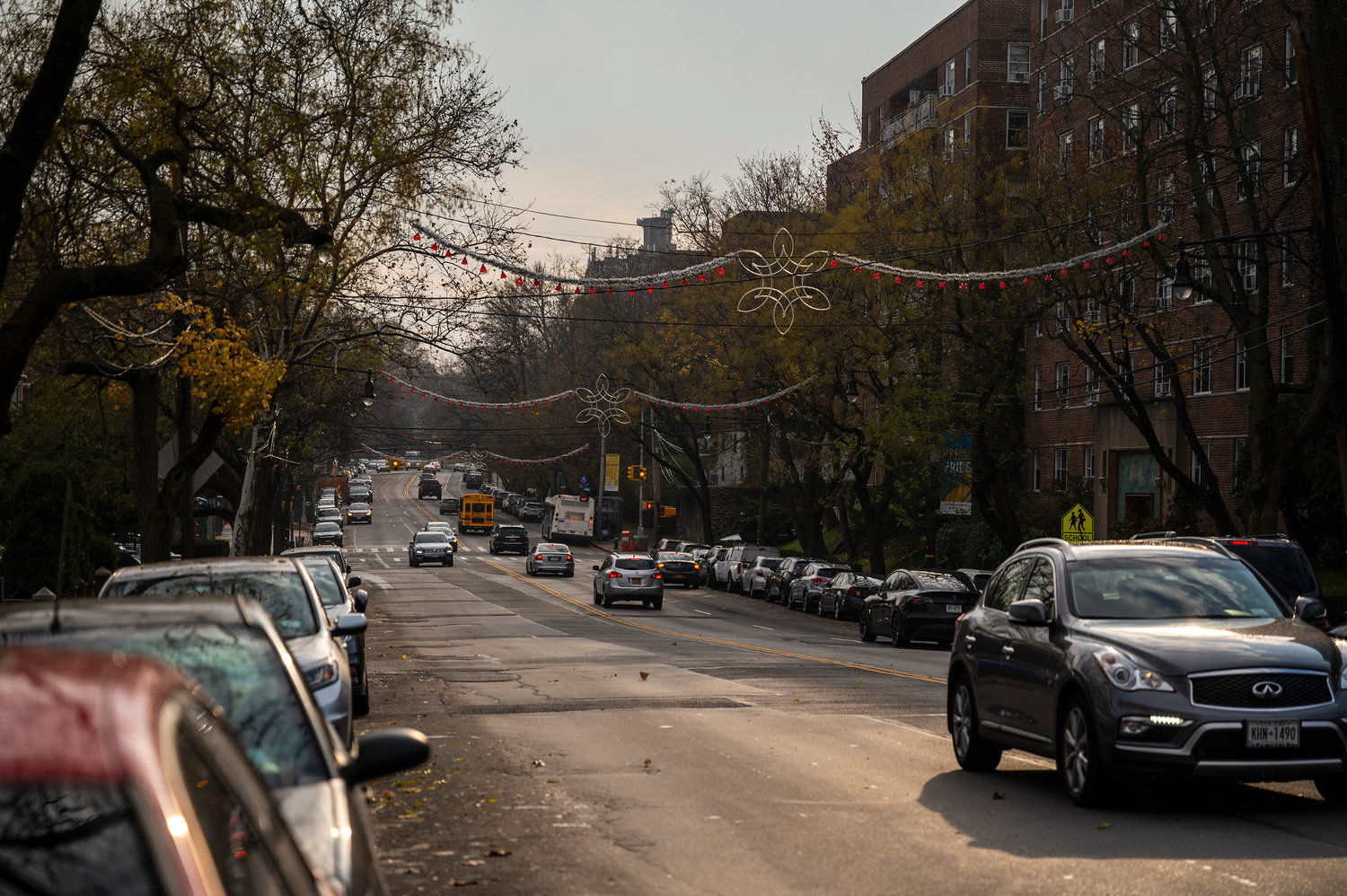 Crossing streets in New York City can be dangerous, even in North Riverdale where there aren’t as many cars as, say Midtown. Creating more pedestrian-friendly streets and a less car-centric society is what many transit advocates are praying for.
HIRAM ALEJANDRO DURÁN 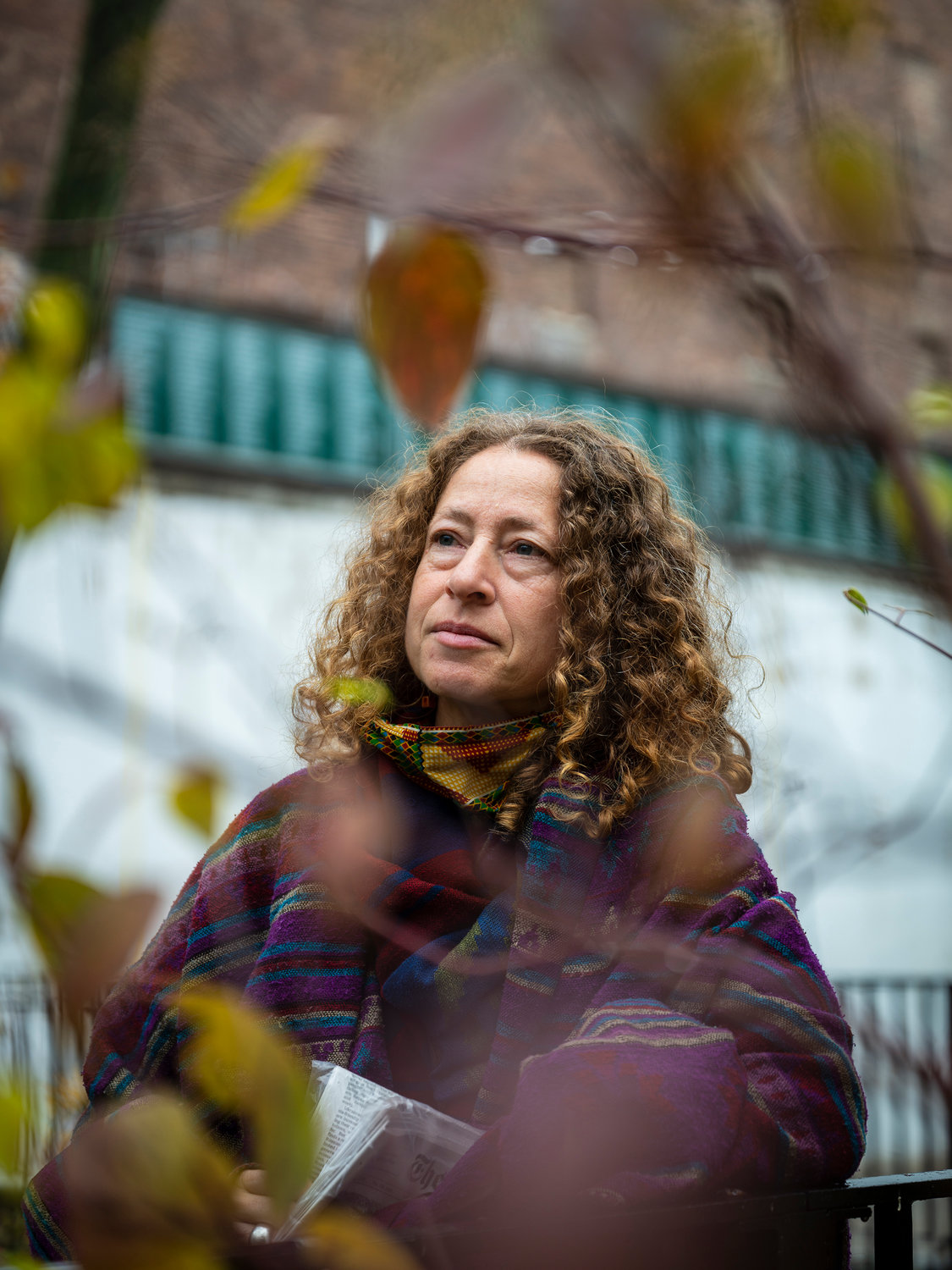 Chana Widawski, an organizer for the Families for Safe Streets project, believes churches, synagogues and mosques can come together to push for safer streets since people who are injured or killed in crashes rip apart not only families, but faith communities, too.
HIRAM ALEJANDRO DURÁN 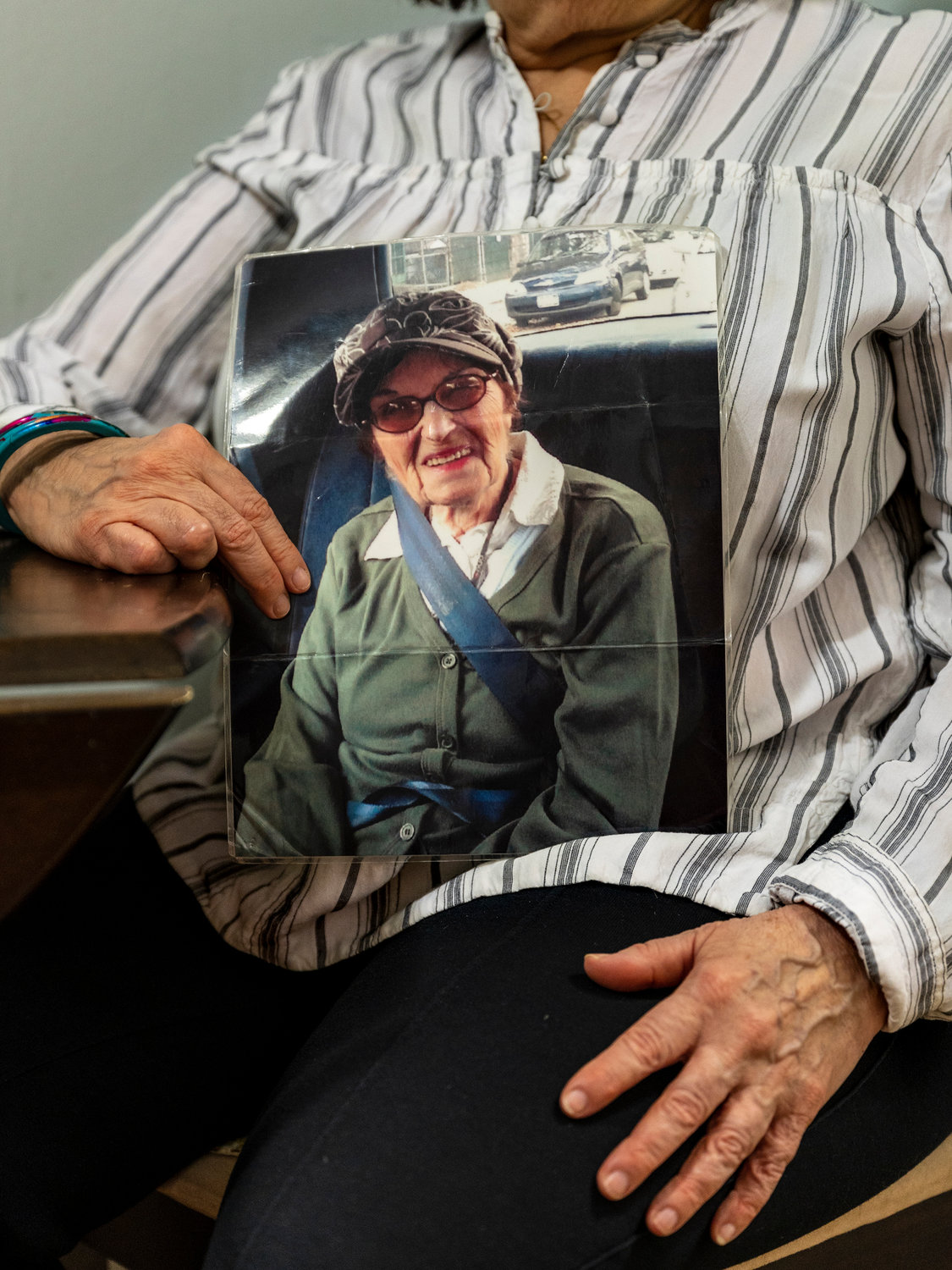 Irma Rosenblatt lost her mom, Ida, in a car crash in 2019. She now pushes for better safety on New York City streets, where more than 4,000 people are injured — every month. Traffic calming advocates hope to enlist faith leaders in their cause as a new administration takes office.
HIRAM ALEJANDRO DURÁN
Previous Next
By SARAH BELLE LIN

Every hour, four people are killed in traffic crashes across America. Traffic injuries affect even more, creating a grim topic during a recent gathering of faith leaders.

“We are Christian, Muslim, Jewish and Buddhist,” according to the opening words of a presentation at that forum. “But we all ache the same way.”

Irma Rosenblatt lost her mother in a Spuyten Duyvil crash on March 24, 2014. She believes the other driver was at fault, and is still traumatized over the “slap on the wrists” she felt that driver received. So her advocacy for safe streets and speed cameras continues.

“I would like to see some of these rabbis, priests, imams get involved,” Rosenblatt said. “I know they’re not political, but this is not politics. This is saving lives.”

It’s one thing to reach out to neighbors, but the faith community? It’s not unheard of at Families for Safe Streets, a project by transit advocacy group Transportation Alternatives founded by families who lost loved ones to New York City traffic crashes.

“I think we’re beginning to scratch the surface on what could be done and how we could be collaborating and connecting,” said Chana Widawski, an organizer for the group.

In fact, Safe Streets offers three ways faith leaders can get involved. They can dedicate sermons to the topic.

They can end the use of the word “accident,” using “crash” instead. And they can form clergy task forces in their communities.

The Interfaith Center of New York, for one, is calling upon leaders across denominations to “use your pulpit, prayers and powerful voices” to get — and stay — involved.

“Faith-based institutions — especially in places like the Bronx — are some of the most tight-knit and most well-developed community organizations,” said Shawn Garcia, a Bronx organizer for Transportation Alternatives.

“There’s already a base there. We don’t have to recreate the wheel.”

Gonzalo Rodriguez knows the roads well. He’s not only pastor of Riverdale Community Church, but he’s also an EMT who has driven New York City streets for decades.

“I see a lot of craziness,” Rodriguez said, blaming street chaos on the “it’s all about me” culture.

“It’s one of the things that in a faith-based community is one of the hardest things to try to teach, preach,” he said. “It’s not about my neighbor, or how can I be a better neighbor?”

Rodriguez is not ready to jump right into traffic safety advocacy, yet, however.

“I won’t build a message on traffic safety,” he said. “But I will mention it every year, especially now for the Christmas season.”

It was near a different holiday — Thanksgiving — where many observed the annual World Day of Remembrance outside of Brooklyn Borough Hall. Family members and friends of loved ones lost to traffic crashes revisited their traumas, retelling tragic stories of how they’ll never see a loved one grow old or go to college.

And how now they demand justice and accountability from public officials and city agencies to make pledges to see Mayor Bill de Blasio’s pedestrian-centric Vision Zero plan through.

“There are solutions,” Widawski said. “There’s speed limiters, street designs that would prevent cars from going (a specific) path, or prevent the middle of our cities from being speedways.”

Garcia is vividly aware of how pro-car this part of the Bronx is.

“We are very mindful that, for a lot of people, a car is a privilege that they’ve worked a long time for,” he said. “It’s really hard to go into communities and tell them to get rid of their cars.”

Transportation Alternatives has smoothed out some of those communication details.

“It’s like when you tell somebody to get on a diet, that doesn’t ever really work, right?” Garcia said. “Same thing with car culture. It’s like, ‘Let’s create real alternatives, real public transportation systems.’ That’s how we’re finding that we’re winning folks over.”

The city’s outgoing transportation commissioner, Henry Gutman, cites Inwood’s Dyckman Plaza as “a shining example of how reclaiming space from cars can transform our neighborhoods.”

“This is a historic day as we turn one of our most successful Open Streets into a permanent plaza that will be part of this neighborhood for generations,” he added.

The pain for Jim Bradley is still quite fresh. He lost his wife, Ruth Mullen, just a few months ago when a bus hit her while she crossed the hilly Kappock Street and Johnson Avenue intersection of their Spuyten Duyvil neighborhood. He talked with local elected, like state Sen. Alessandra Biaggi, to push for long-awaited safety measures there.

DOT officials told Councilman Eric Dinowitz it has begun a feasibility study to determine if the intersection is viable for a traffic light.

“This study has not been completed just yet,” Biaggi said, in a statement. “But my office continues to be in touch with the department regarding its process.”

All in all, Rosenblatt believes demands are plain and straight-forward: Slow down, pay attention, and support solutions that save lives.

It seems hard to argue with, but the rising death toll reveals the cracks in the system.

If her mother were alive today, Rosenblatt said “she would be part of this movement.”