Fostering community by bartering some sourdough 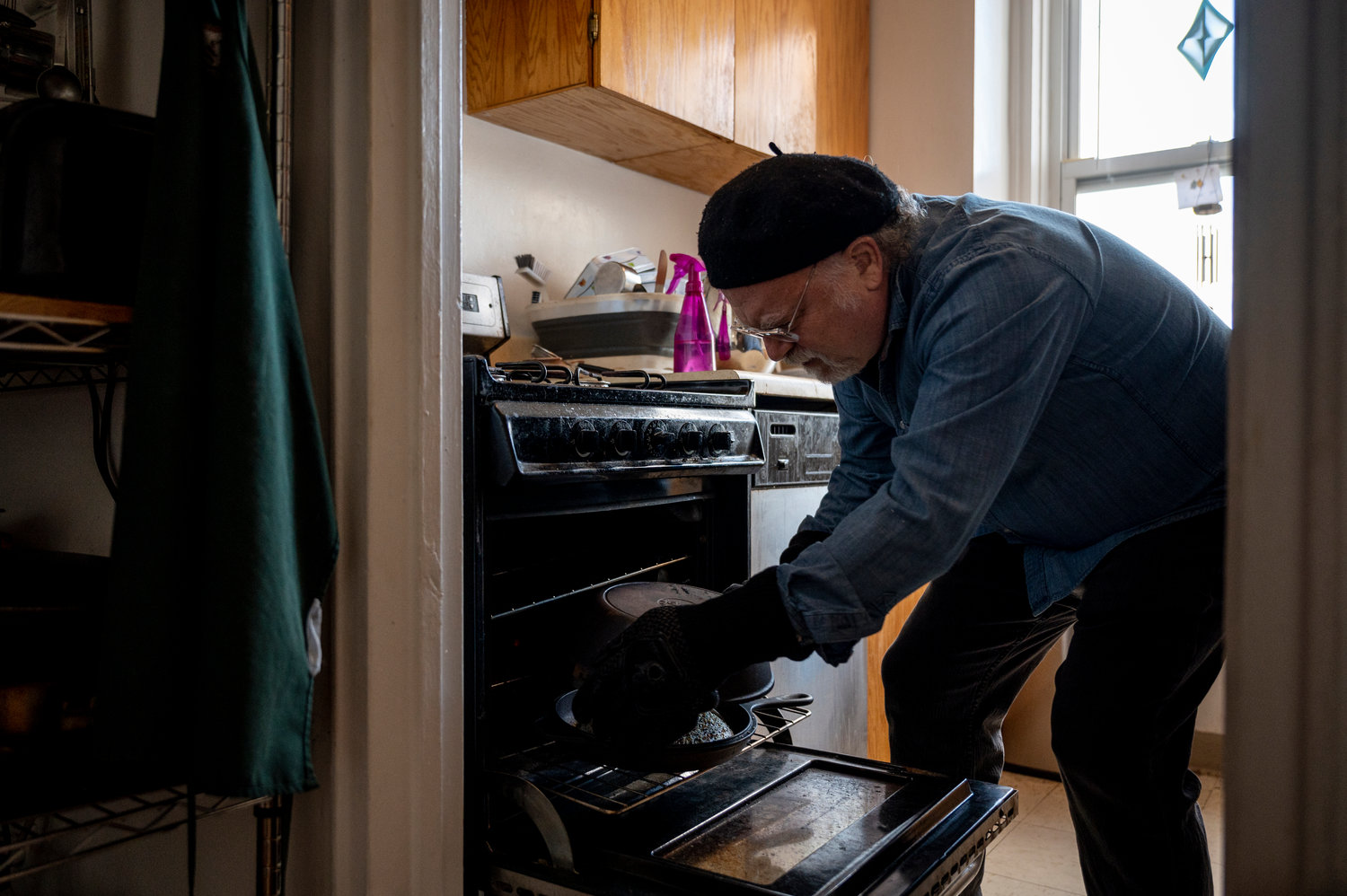 Arnie Adler first tried bartering his homemade sourdough bread with other members of the Yonkers Paddling and Rowing Club, who he knew would be able to trade him homemade goods like honey and kombucha. Adler expanded this project to Riverdale, posting on social media seeking out trades from his neighbors.
HIRAM ALEJANDRO DURÃN 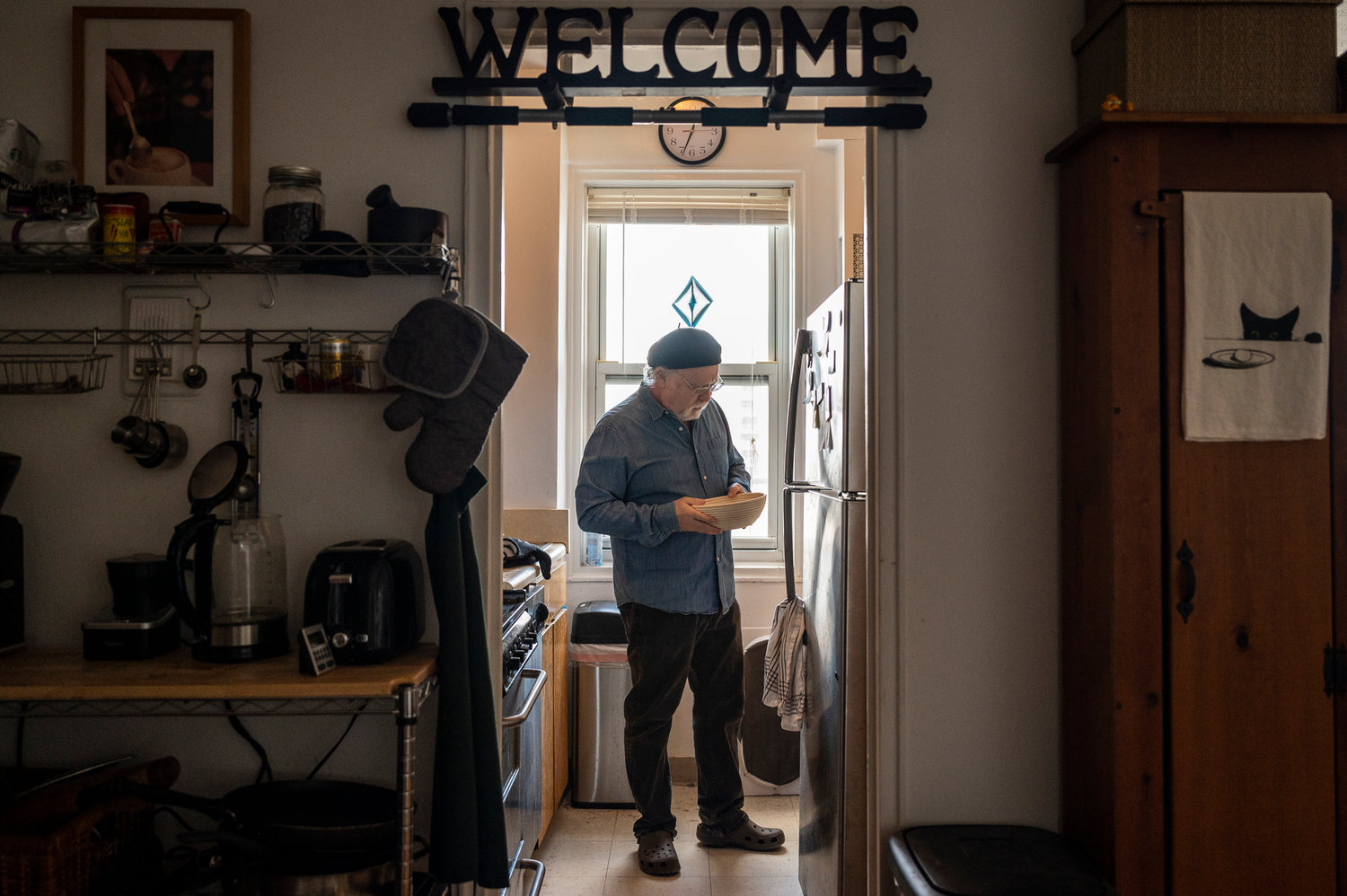 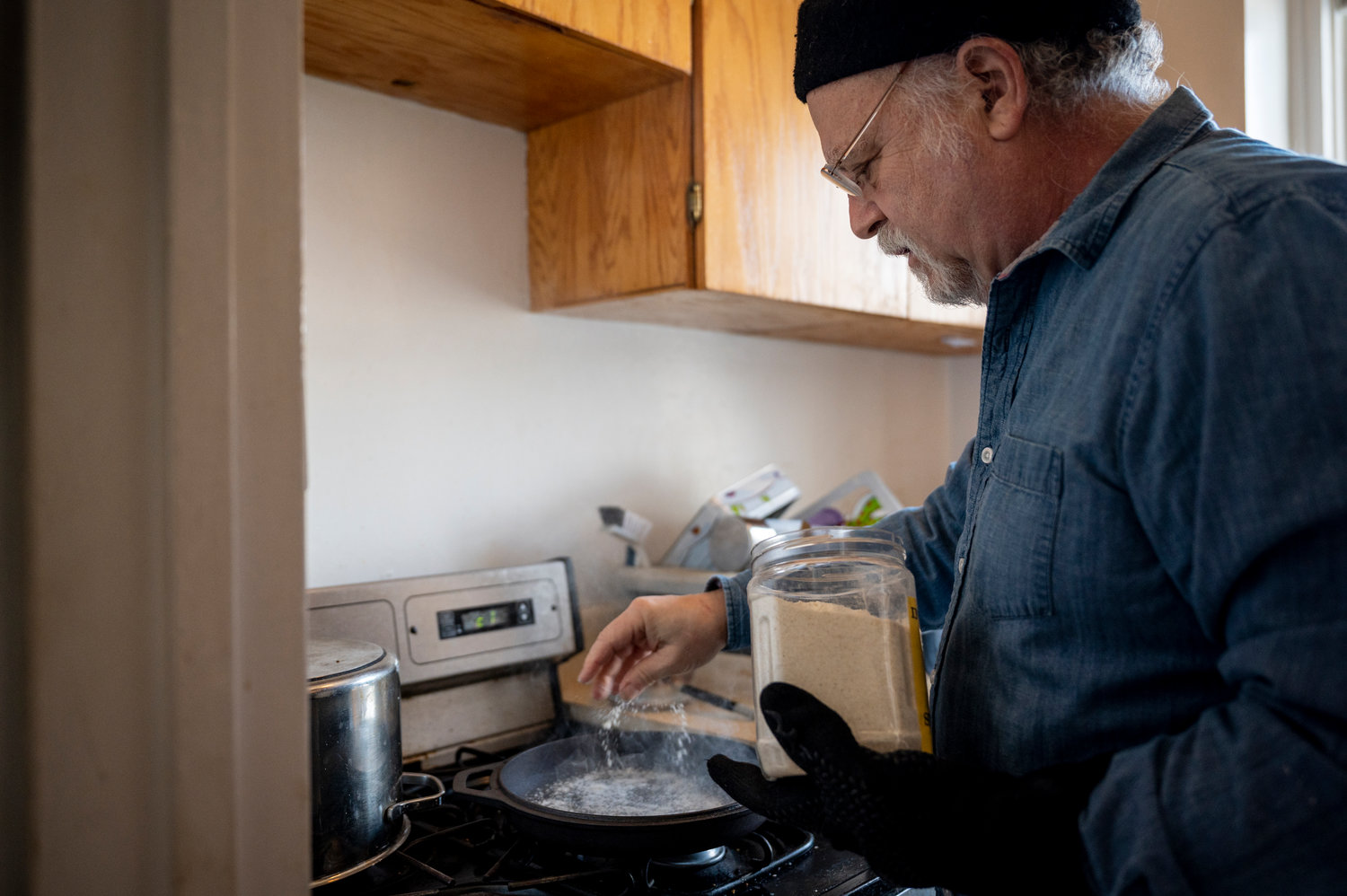 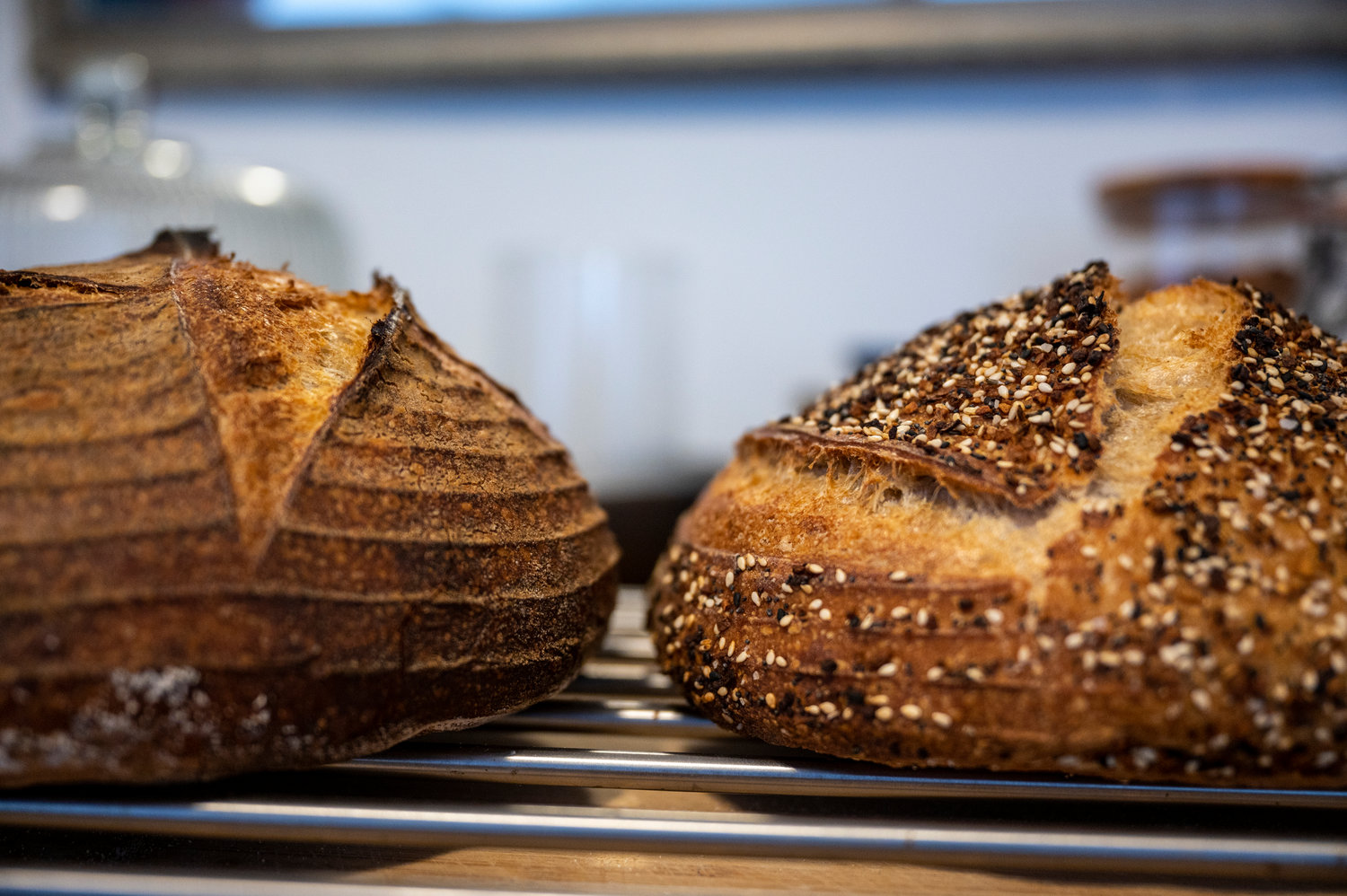 Arnie Adler says he makes two kinds of sourdough bread to trade. One is plain, the other is an everything bagel topping. He recently took to social media to barter with his neighbors for their own homemade goods.
HIRAM ALEJANDRO DURÃN 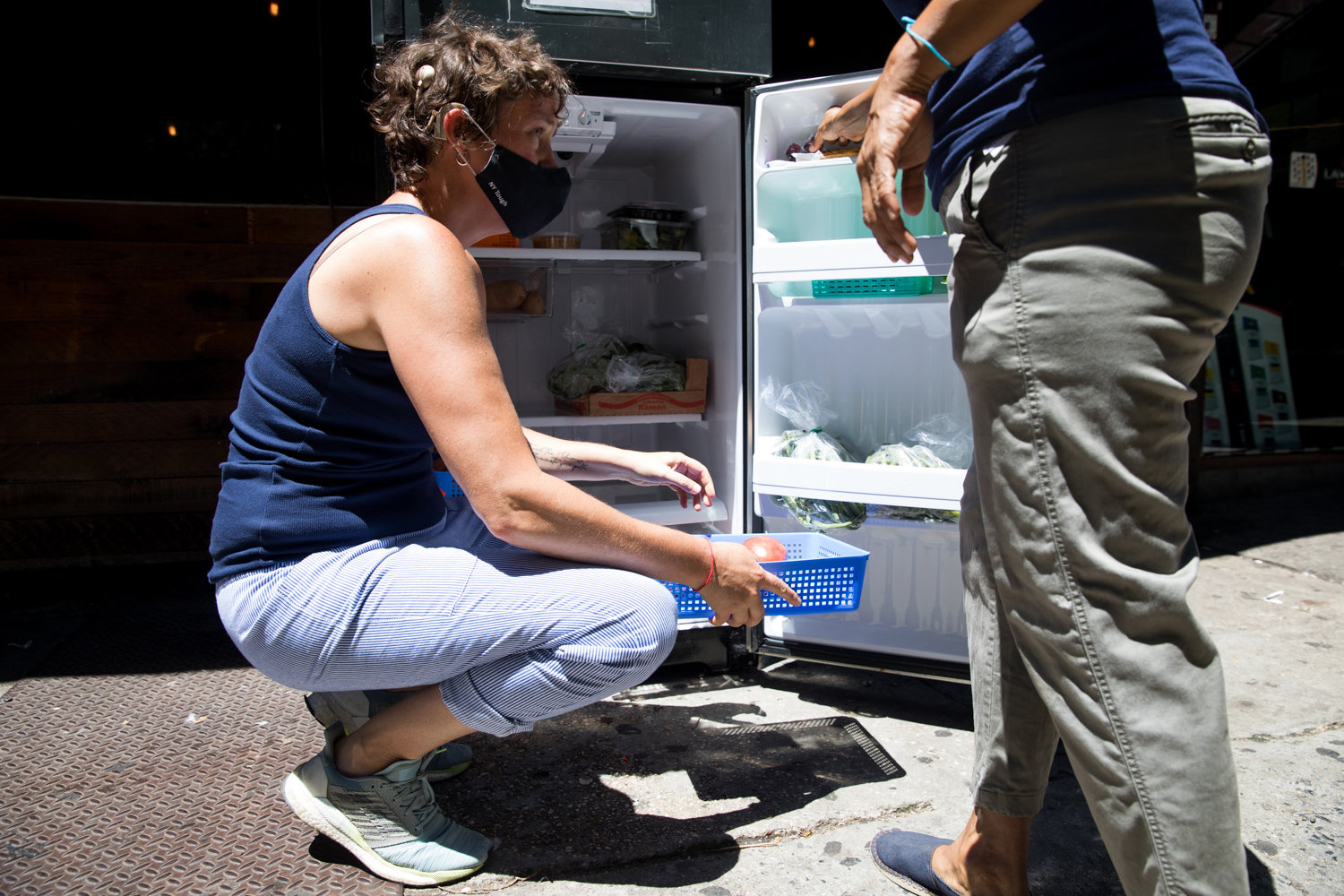 The Friendly Fridge on Broadway near West 242nd Street is where Arnie Adler first started sharing his homemade sourdough bread with his greater Riverdale community. Adler then went online to social media announcing his intentions to barter his bread with neighbors.
JULIUS CONSTATINE MOTAL/ File 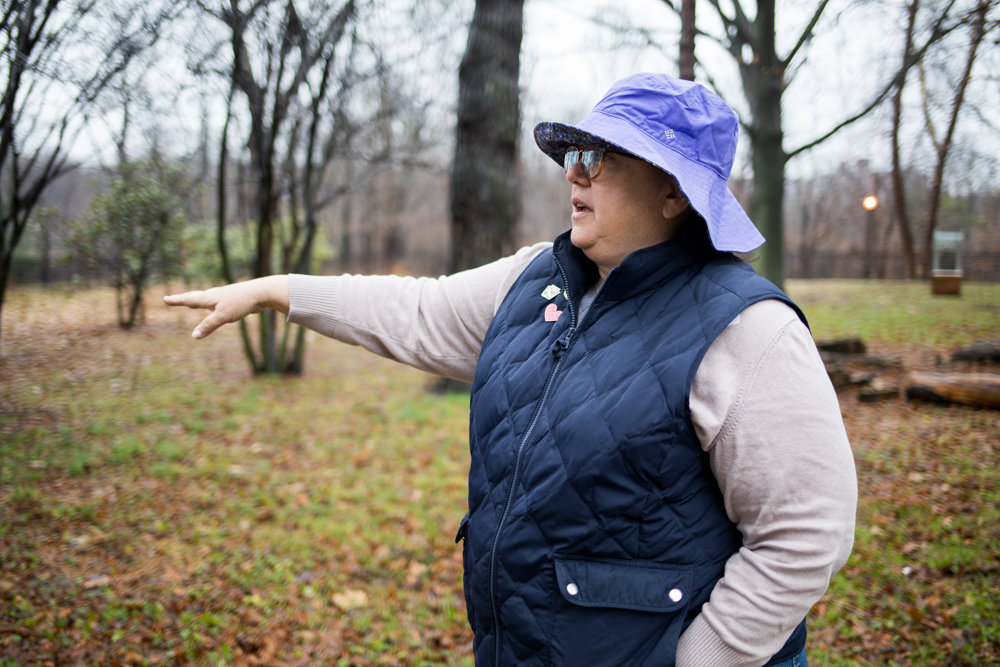 Laura Carpenter Myers has been making her family’s mac and cheese recipe for the past 50 years. But in a world run by the coronavirus pandemic, that recipe is its own form of currency, allowing her to barter with Arnie Adler for a loaf of his homemade sourdough bread.
JULIUS CONSTANTINE MOTAL / File
Previous Next
By ETHAN STARK-MILLER

There was a time when many longed to stay home and chill. Then the coronavirus pandemic came with its months-long lockdowns, and those wishes came true. Except it wasn’t as relaxing as many might have imagined, instead quickly finding new ways to pass the time at home.

Some binged all the television shows they’d ever wanted to watch, while others read every book collecting dust on their shelves. But social media had its own offerings, from the very earliest days of the pandemic: baking homemade bread. Specifically, sourdough bread.

As an avid home chef, Arnie Adler was enthusiastic to jump on this new trend.

“It turns out, I make a really good loaf of bread,” the local photographer said. “And I like the process of making it.”

But there’s only so much bread one can eat. So, Adler took things a step further — he turned his tasty sourdough into a different kind of dough — you know, money — bartering with others in the community for their own homemade specialty items. It was something Adler first floated on social media sites, like one of Riverdale’s primary Facebook community groups last March.

“I’m really excited about the amount of people who have liked what I’m doing,” Adler said. “I’ve had about a dozen inquiries and about a half dozen swaps with Riverdale people. I got a full rack of ribs out of this. I got mac and cheese and yogurt. And I’m making new friends.”

One of those new friends is Laura Carpenter Myers, the director of the Van Cortlandt House Museum. When she first saw Adler’s Facebook post, Myers said she immediately wanted a loaf of that sourdough. In exchange, Myers offered Adler a batch of her special homemade macaroni and cheese.

It’s from a family recipe Myers’ mother taught her when she was a kid. She never imagined that, 50 years later, it would become its own form of currency. Myers usually is shy about sharing her mac and cheese. But Adler’s trade offer was one she couldn’t refuse.

“I know it’s going to taste OK, but I’m always a little nervous that the recipient might not like my combination of cheese, or maybe (think that) I put in too much smoked paprika,” Myers said. “But (Adler) really liked it. His bread is just amazing, and he’s a really nice guy.”

This is the first time Myers ever bartered with a complete stranger. She’s traded meals with her close friends in the past, of course,  cooking for each other on and off. But nothing like the exchange she had with Adler.

For Adler, bartering with neighbors is not just about swapping his bread for some homemade treats, it’s also about connecting with the community. It was that very interest that led him to produce his 1,000 Faces of Riverdale photo project in 2012 — a collection of portraits featuring his neighbors.

Riverdale is something Adler has always broken down into five different groups. There’s the Orthodox Jewish community. Wealthy individuals. Working-class people. The elderly. And students at Manhattan College and the College of Mount Saint Vincent.

“They didn’t dislike each other, but they just didn’t connect,” Adler said. “And I saw they all lived in their own little worlds. My photo project was to help combine us all, in a way.”

Another way to bring these communities together? Bartering his bread with his neighbors. Especially during the coronavirus pandemic.

Adler first ventured into the realm of bread bartering by reaching out to the Yonkers Paddling and Rowing Club. That might be an odd place to start, but Adler knew other members were into hobbies like beekeeping, so they had to have some unique items to trade for sure.

And he was right. Adler bartered his bread for honey, eggs and even kombucha. The club was a good trial run because Adler is friends with the other members, and didn’t have to worry as much about exposure to the coronavirus.

From there, Adler expanded his reach, donating bread to the Friendly Fridge initiative, where locals drop off food in a refrigerator and pantry that’s open for anyone to take from. Adler’s Friendly Fridge of choice is located in front of an empty Broadway storefront next to Claudy’s Kitchen.

That started four months ago, said Sara Allen, who helps run the fridge. And Adler has continued to do it once a week since. In fact, his sourdough has become one of the fridge’s most popular items.

“I’ve been there three times at least — probably four, that he dropped it off — and I’ve watched people run to grab it,” Allen said. “Honestly, I just think it’s so sweet. And it’s also very thoughtful that he does it consistently. And frankly, he does it with love.”

But love alone isn’t enough to make delicious bread. Adler experiments with different recipes from the internet, picking up advice from his baker friends to perfect his sourdough loaf. For bartering, Adler mainly makes two kinds of bread, one that’s plain and one with an everything bagel topping.

At this point in his life, Adler has no plans to open his own pandemic-inspired bakery. Instead, he aspires to attend a baking workshop or intern somewhere to learn about what it’s like to own a bakery.

It will remain a pastime for now, although Adler admits he’d love to see the food bartering system grow on its own. Yet, no matter what comes of Adler’s latest community project, Myers thinks it’s been good for making connections during the pandemic.

“It was a really fun way to meet someone in the community,” the mac and cheese maestro said. “I really think it gives you a chance to know the neighbors you might not necessarily cross paths with in your daily life.”