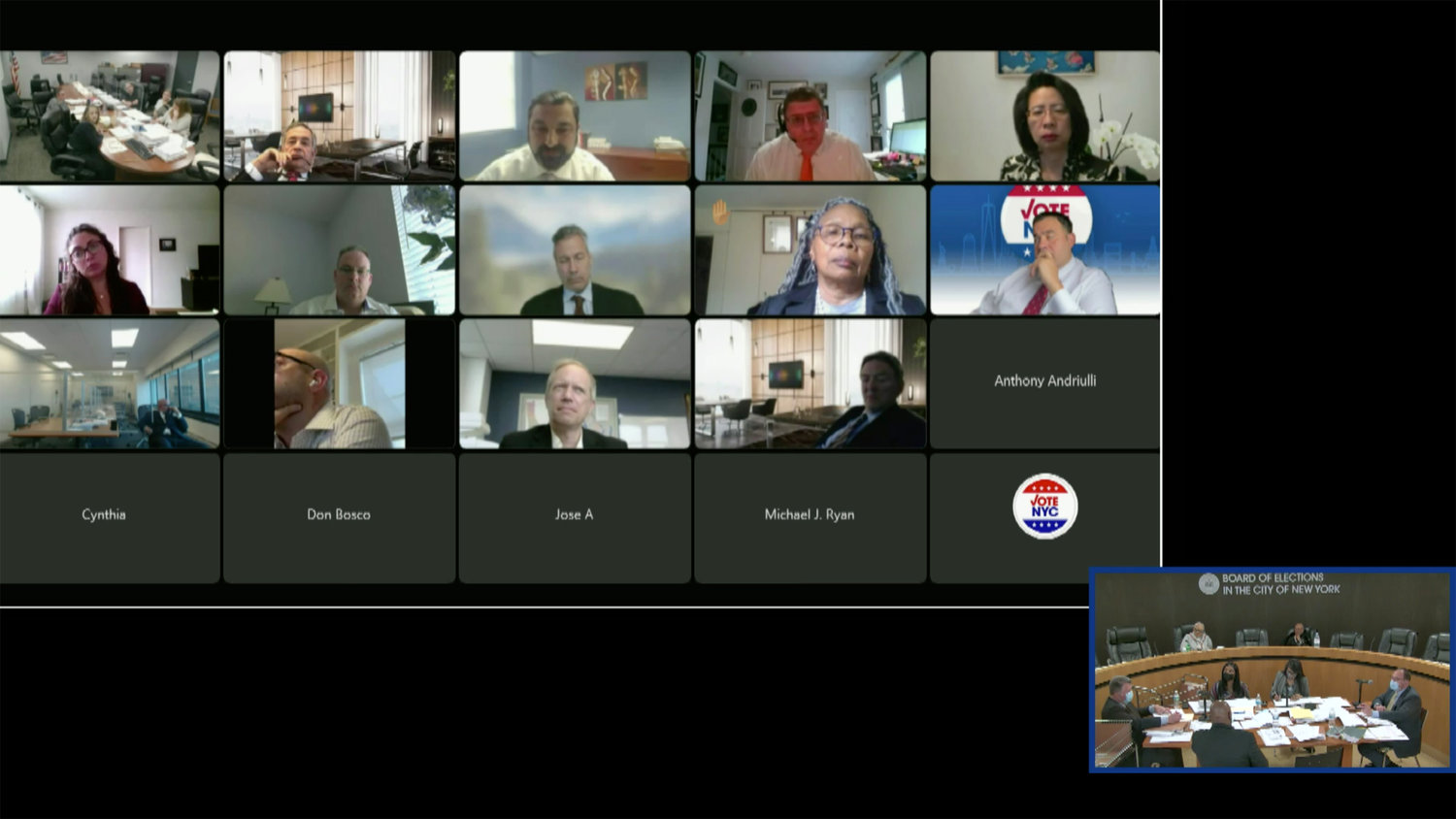 John Ciampoli — a lawyer representing a Republican congressional candidate in the Bronx — told the elections board last week he has proof that one of his client’s opponents submitted forged signatures on her nominating petition.
Courtesy of the New York City Board of Elections
By SACHI McCLENDON

While most eyes are likely focused on what’s happening with state senate and congressional lines following last week’s appeals court ruling, another issue involving a Bronx congressional seat has popped up in a race a little closer to home.

The charge? Fraud. But no verdict, at least from the Bronx Supreme Court, which chose to hold off while the high court’s decision throwing out district maps plays out.

Desi Cuellar, a Republican hoping to challenge U.S. Rep. Alexandria Ocasio-Cortez in November, has accused one of his opponents, Pura De Jesus-Coniglio, of submitting forged signatures in her petition to challenge him in the GOP primary.

What’s more, Cuellar claimed in court documents some of those alleged forgeries were from current employees of the city’s elections board vowing through affidavits those signatures were falsified.

“The affidavits I have include affidavits from board employees that they did not sign,” Ciampoli said. “They identify the page and line number of the petition where their name appears, but it’s not their signature.”

Ciampoli claimed 10 total affidavits from election board employees and administrators, including one from the board’s former deputy executive director as well as a current board official in the Bronx.

“In over 30 years of doing this, I’ve never seen board employees have their names falsely affixed to a petition,” he said.

Mike Rendino, chair of the Bronx Republicans, said he was looking over De Jesus-Coniglio’s petition signatures when he recognized a couple of the names.

“We realized there were two (BOE) employees that we knew personally,” he said.

In the court documents, Ciampoli focused on two people in particular who gathered the majority of the signatures for De Jesus-Coniglio’s petition, both who racked up just under 1,900 signatures combined.

The lawsuit claims that the vast majority of the signatures those two individuals received were fraudulent.

“It was too perfect to be believable,” Rendino said. “Every door they knocked on, they got a signature. It was one house after the other after the other. And they did this all in an eight-day period, these two individuals.”

While the elections board did not respond to multiple requests for comment, one commissioner on the board said several elections board employees told him they didn’t sign De Jesus-Coniglio’s petition.

“I think it makes a mockery of the process that we’re here to administer and oversee,” Commissioner Gino Marmorato said.

“Mr. Ciampoli, I would encourage you to please take it up in court because it is outrageous,” Commissioner Michael Coppotelli said.

While Ciampoli did just that, the case has since been dropped while the political world waits for new congressional district maps to be released.

Still, if a candidate or campaign was found to have submitted fraudulent signatures, that  could rise to a criminal offense. Four people were charged by the Suffolk County District Attorney’s Office in 2018 with voter fraud, for example, after allegedly forging petition signatures.

A representative for De Jesus-Coniglio’s campaign directed all questions to Angel Cruz, the attorney who represented her in the now defunct court case, who in turn denied the allegations.

“She elected to run for Congress,” Cruz said, “but she did not collect the signatures.”

De Jesus-Coniglio’s campaign hired a company to collect the signatures, like many candidates do to get on the ballot, Cruz said. She agreed to pay $11,500 for 3,000 petition signatures from Victory System Election Corp., according to a contract the campaign shared with The Riverdale Press.

“She didn’t even look at the petitions,” Cruz said. “The petitions were gathered by the company. She had nothing to do with it. She never saw them.”

Marleni Estella, the listed registered agent for Victory System Election, could not be reached for comment.

“Don’t smudge Pura’s character without at least putting in there that she didn’t physically collect the signatures,” Cruz insisted to a reporter. “She personally didn’t. She’s not responsible for the fraud.”