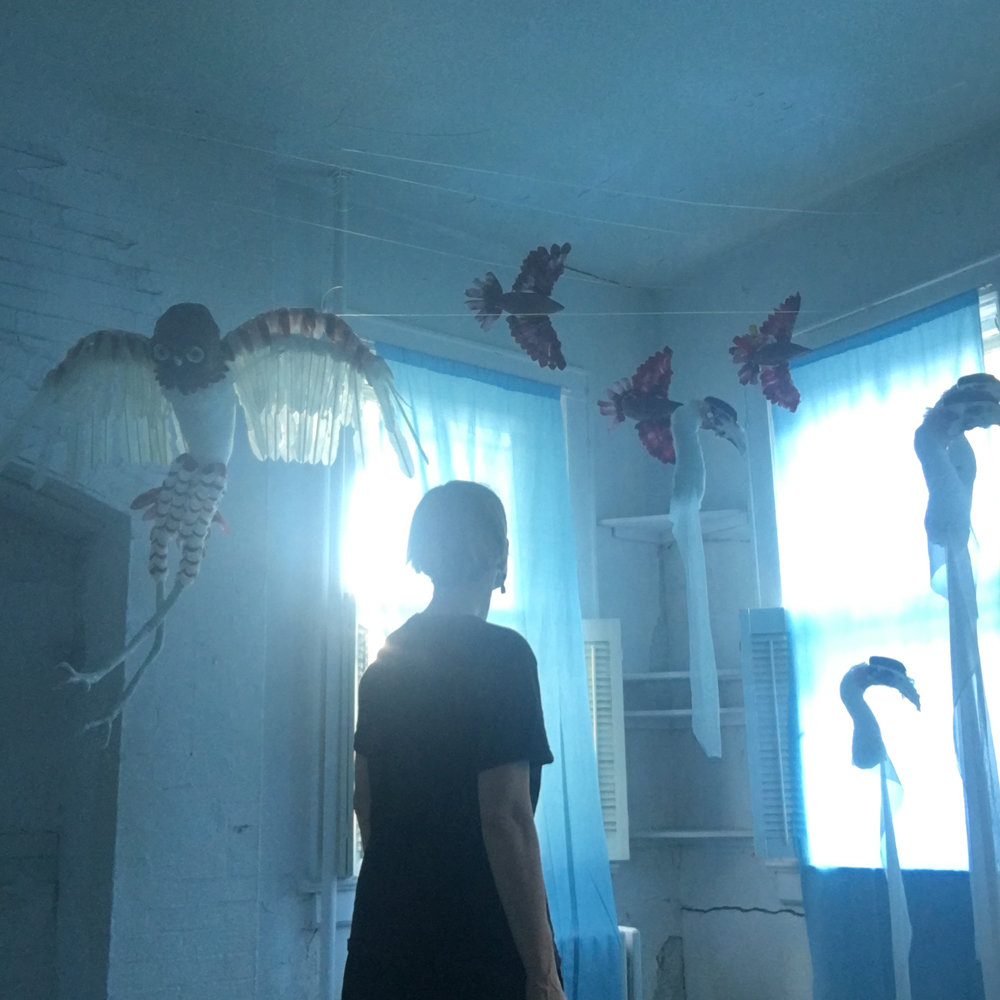 Michelle Frick takes a look at three of her pieces on display at ‘Portal: Governors Island,’ a free art exhibition that’s open to the public every weekend in September.
Courtesy of Michelle Frick 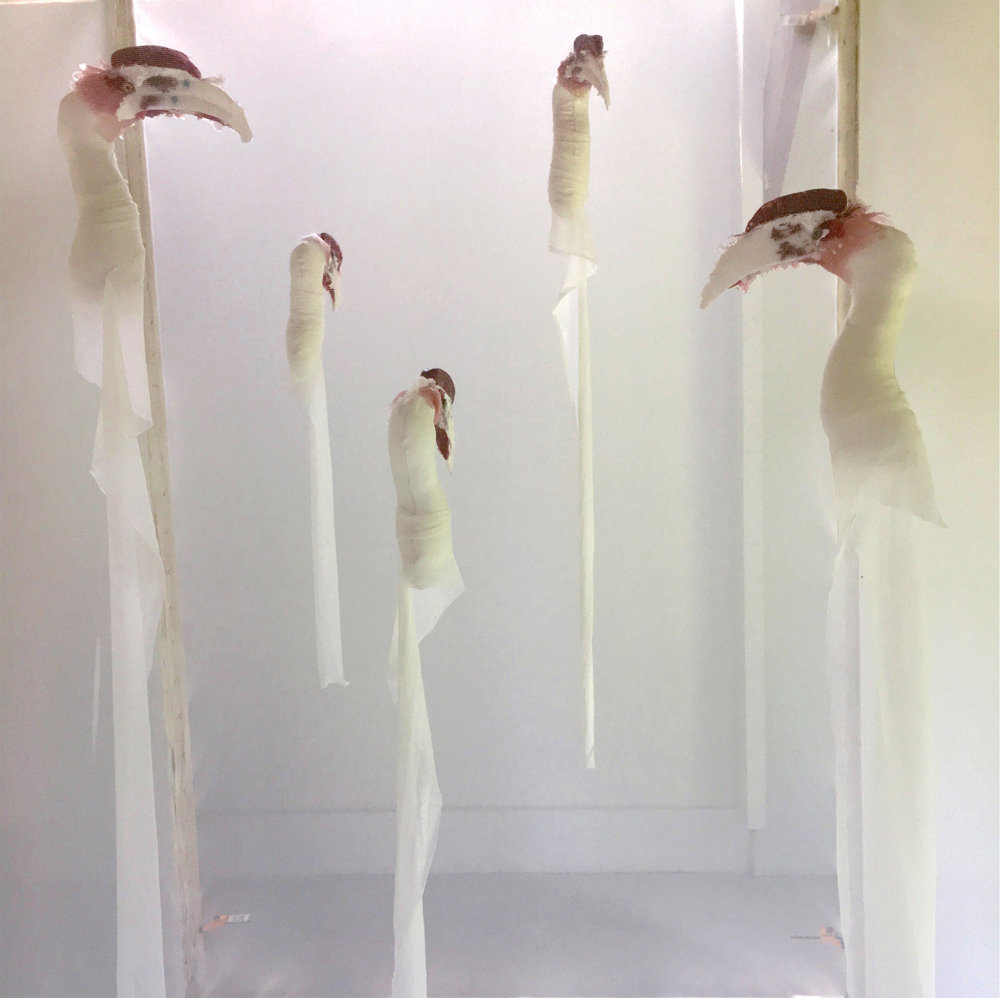 ‘Vulnerable’ is one of many bird-inspired pieces Michelle Frick has worked on over the last decade. It’s currently on display at ‘Portal: Governors Island’ through Sept. 29.
Courtesy of Michelle Frick 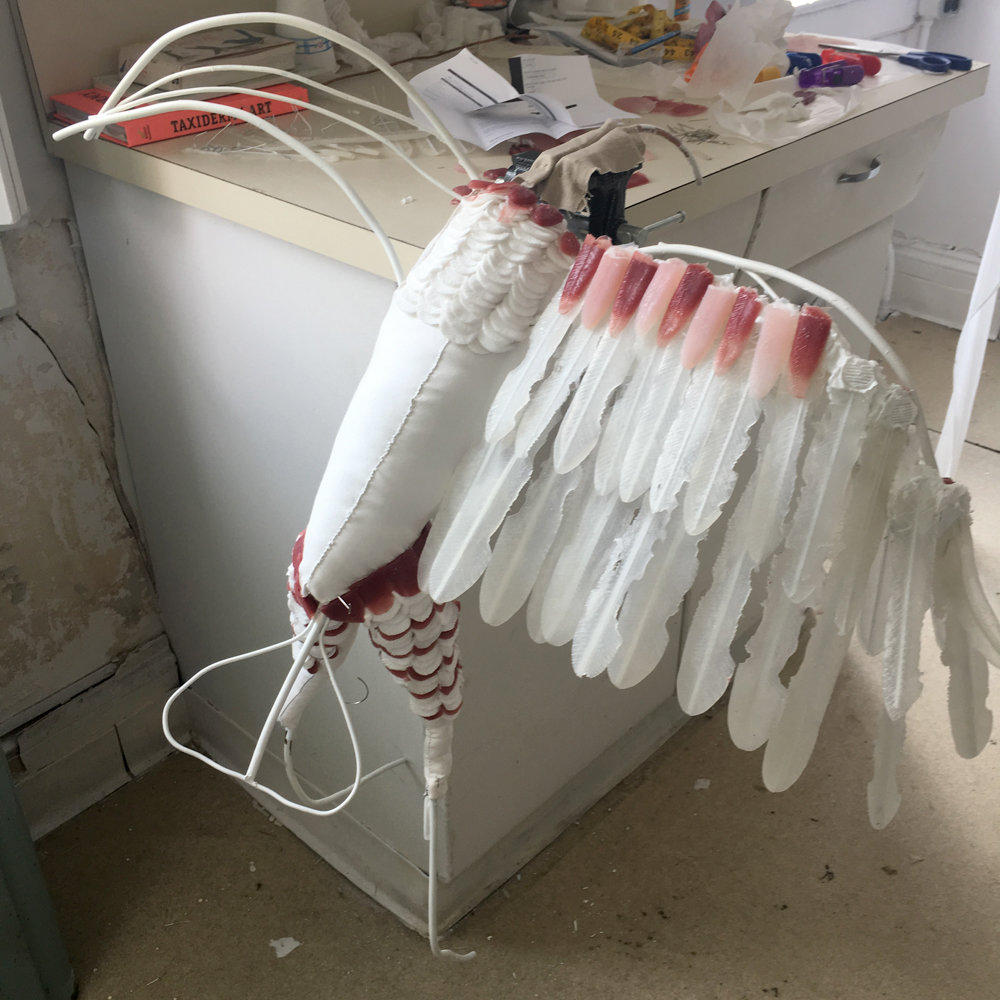 Over the last 10 years, Michelle Frick has shifted her artistic focus from pieces about her family to work that explores the connection between medicine and nature with sculpture and installation designs of birds. She now has three pieces on display on Governors Island through Sept. 29.
Courtesy of Michelle Frick 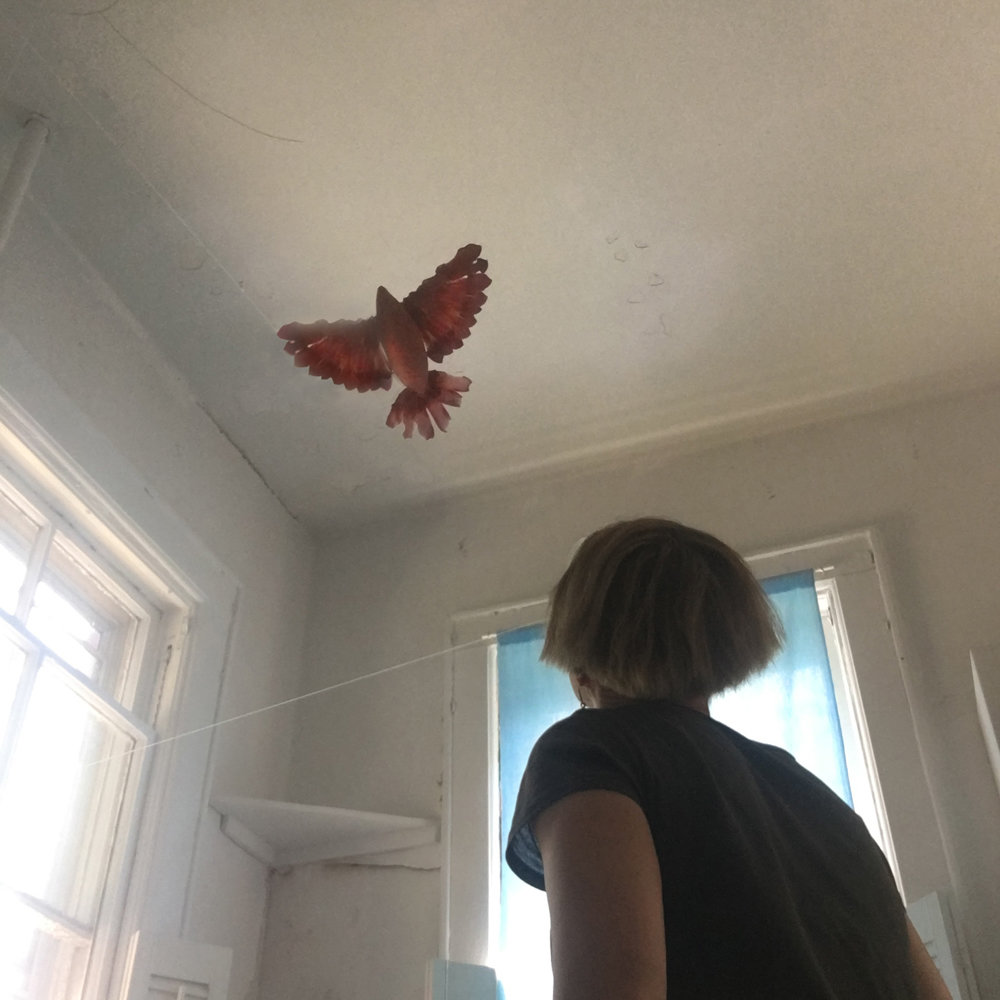 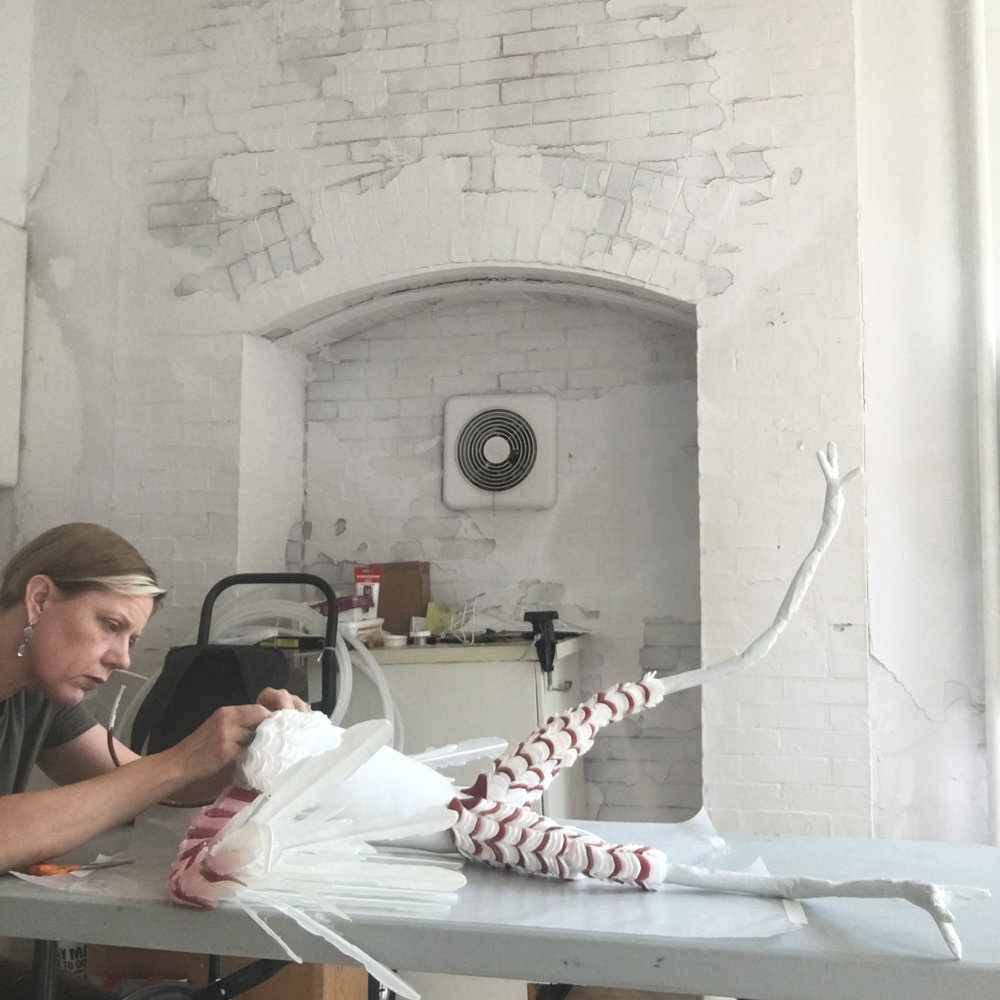 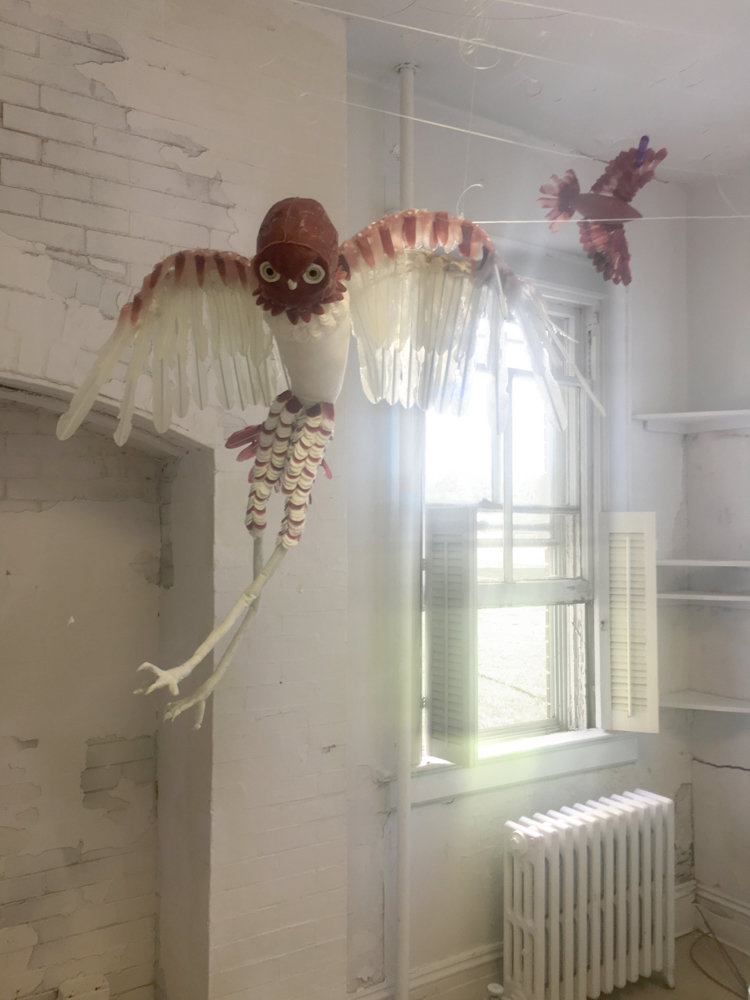 Riverdale artist Michelle Frick explores the connection between medicine and nature when she makes birds like ‘Megafauna: Cuban Cursorial Owl,’ an owl that’s on view at ‘Portal: Governors Island” through Sept. 29.
Courtesy of Michelle Frick 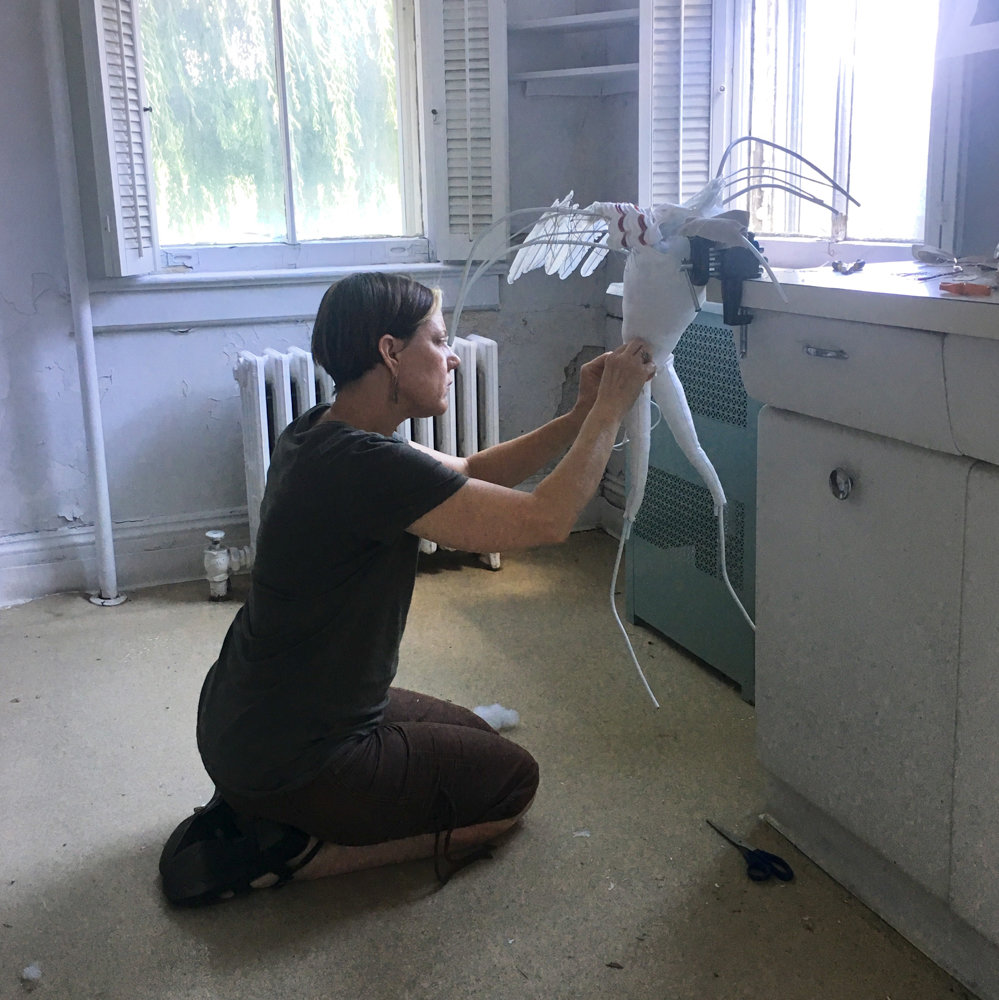 Michelle Frick used to make art that was centered on her family, but after a few hospital visits for various surgeries both her son and her husband needed a decade ago, her focus has shifted to take a look at the connection between the environment and medicine.
Courtesy of Michelle Frick
Previous Next
If you go ...

Michelle Frick was the only one in the hospital who could see the bird.

It was just a decade ago Frick was on one of her regular trips to the hospital for various surgeries needed by both her son and husband. Frick was watching nurses go into a drawer to pull out equipment and tools for an IV when she saw an object that looked like an animal body part.

“It was a really cool colored blue, and it just looked like it could be a bird’s beak,” Frick  said. “So I took one home and I made a bird.”

Frick returned the hospital a few weeks later and showed one of the nurses the bird she made out of cast paper. She even added a light inside to illuminate the bird’s beak.

But Frick wasn’t ready to stop there. She asked to collect any clean trash to make more. The nurse introduced her to a storeroom with clean medical supplies that were soon to expire. And the rest is artistic history.

In the 10 years that have flown by since, the Riverdale resident has shifted her work from family to exploring “the intersection of medicine and nature” in different kinds of birds.

“I reconfigured my whole focus to be about life and healing,” Frick said.

Although she no longer uses medical supplies for her work, Frick is tapping into this focus on Governors Island this fall. She’s one of 100 artists featured in “Portal: Governors Island,” a free exhibition through 4heads — a nonprofit created by artists for artists — that’s open to the public every weekend through Sept. 29.

Each work in “Portal” is in old Coast Guard houses that have been empty since the 1980s. That’s exposed brick and peeling plaster, which Frick thinks adds a certain value to her work.

“It’s a really great opportunity to be able to create a piece in kind of a decaying room,” she said. “It’s just a beautiful space that really enhances my work.”

There are only three of Frick’s sculpture and installation designs on display: “Megafauna: Cuban Cursorial Owl,” “Bloodbirds” and “Vulnerable” — each focusing on different birds, their struggles, and their fragility in life.

Even though Frick created “Megafauna: Cuban Cursorial Owl” and “Bloodbirds” during a residency 4heads hosted on Governors Island this summer and “Vulnerable” last year, she feels like the three really complement one another.

“If you look at it, it almost looks like one piece,” she said. “But they’re separate.”

“Megafauna” features a hovering owl with a look on its face Frick says can make people feel “uneasy.” It’s essentially decrying the current state of the environment.

“This is a big owl and it’s got these glaring eyes like, ‘How dare you?’” Frick said. “’What are you doing to my world?’”

Since the environment is a consistent theme in Frick’s work, she hopes this owl conveys the idea people “have to take care of nature, or it’s not going to be natural anymore.”

Despite creating birds for the last decade, Frick feels this was the first time she’s had a chance to familiarize herself with specific parts of their bodies.

“This is the first piece where I really learned about wing structure and feathers,” she said, and “how to make plastic feathers that actually look like feathers.”

And while Frick has a general idea of what her work will become, there’s still a bit of a surprise for her once the final product is in front of her.

“When I show my work is when I really know what it’s about and what I’ve made,” Frick said.

Frick hopes visitors who stop by Governors Island throughout September give her insight into what they think her work symbolizes, since to her, “it’s up to the viewer to decide what it says.”

“People will come up with incredible observations about the work that I never even thought of,” Frick said. “I really find it extremely valuable to show my work and have others kind of give me feedback on what it’s saying to them, because whatever it’s saying to you is what it’s meant be communicating.”