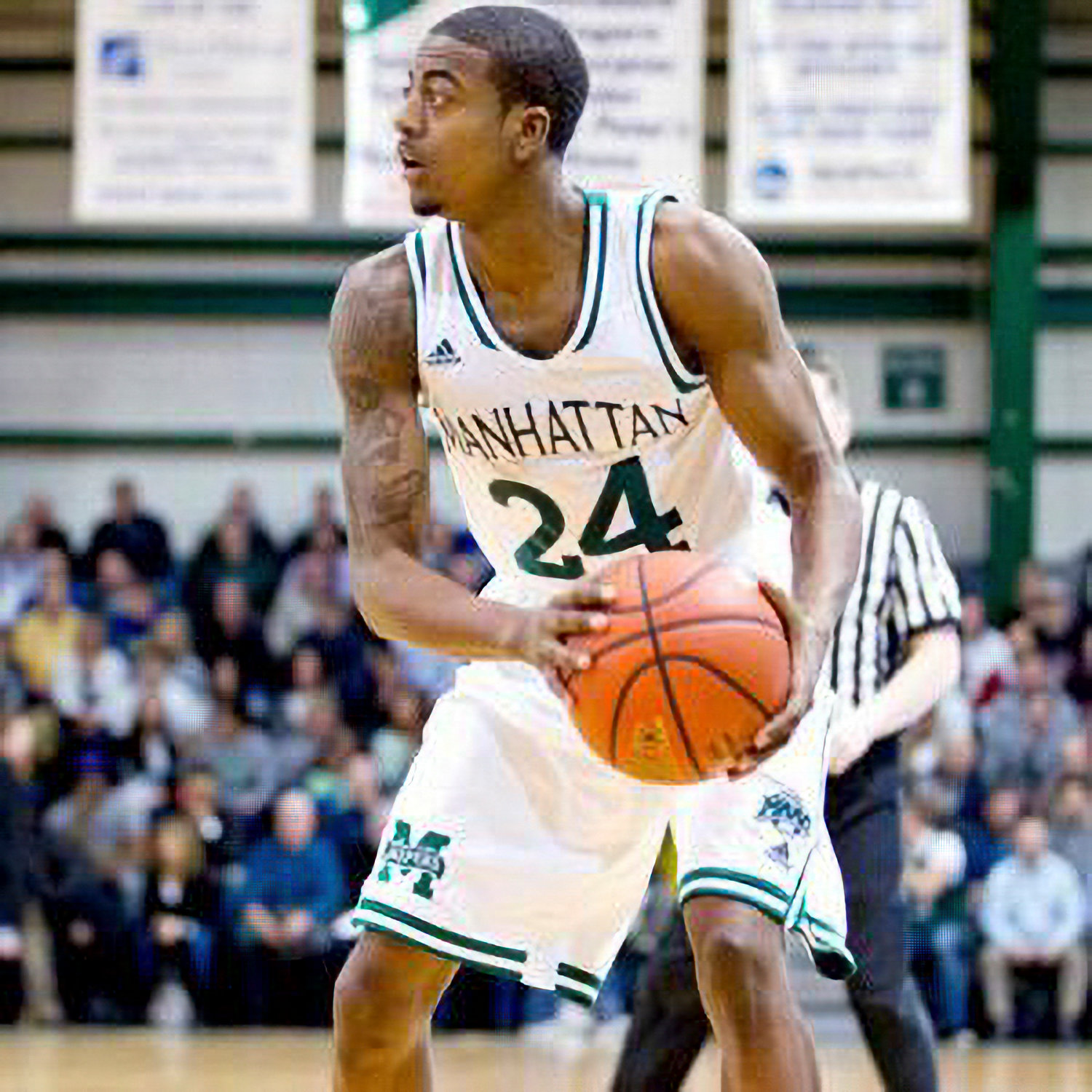 Before George Beamon established himself as a star on the OBL circuit, he played college basketball for the Manhattan Jaspers.
Courtesy of George Beamon
By Pete Janny

It’s been eight years since George Beamon last took the court for Manhattan College. Those that know one of the greatest Jasper basketball players in recent memory have never been surprised by his success. And that holds true for his latest achievement on the court — some 2,000 miles away from Riverdale.

Very little compares to the feeling of winning a championship with your college team. For Beamon, that moment came in March 2014 when Manhattan won the MAAC Tournament in Springfield, Massachusetts, and they became local celebrities all the way through the euphoria of the Selection Sunday Show which named the Jaspers among the darlings of the 64-team bracket that year.

It was Beamon’s senior season and he was averaging more than 18 points per game.

“He brought energy and work ethic to the gym everyday,” said Barry “Slice” Rohrssen, who was Beamon’s coach at Manhattan during his freshman and sophomore seasons.

Flash forward to this past July when Beamon had another watershed moment in his career. This time he was playing in Los Angeles competing for $10,000 in the Ones Basketball League started by NBA great Tracy McGrady.

Beamon found himself flying through the field and before he knew it he was the last man standing. He could have only dreamed of playing on a stage that big as a small kid growing up in the small town of Roslyn on Long Island.

“It was surreal,” Beamon told The Riverdale Press. “Being around T-Mac was a blessing just speaking to him and showing you love.”

One on one is an art form in basketball. It’s an area where the best scorers flourish. That part of Beamon’s game has always come second nature to him, said Rohrssen.

“Offensively he was always efficient doing multiple things in terms of being able to drive to the basket and attack,” he said.

Isaiah Green, a co-organizer of the Marble Hill Classic, coached Beamon this summer in the Pro Division of the Zone 6 Basketball Tournament in Brooklyn. Nothing about what Green saw in Beamon’s game surprised him when hearing about the 6-foot-4 shooting guard’s success at OBL.

“He’s a natural scorer,” Green said. “He shoots at a high percentage, has a smart IQ and is a humble player.”

And it’s a testament to Beamon’s lengthy professional career, which has included stops in the NBA G-League, Canada, England, Iceland, Portugal and Switzerland. There’s a unique charm to all of them, Beamon said, with the NBA G-League putting him just on the outside looking in of the NBA.

“I enjoyed them all,” Beamon said about his overseas experiences. “They really helped me in different ways on my journey.”

The OBL rose in popularity in its inaugural season. The league made stops in six different cities including New York with three players from each location qualifying for the OBL Finals in Las Vegas with $250,000 on the line. The winner is deemed the “Ruler of the Court” by McGrady and gets to sit on a throne.

Beamon’s arsenal of moves in the 1v1 format took him all the way to finals in Las Vegas. He fell just short, losing 10-9 in sudden death overtime against John Jordan out of Texas A&M-Corpus Christi. But as Beamon knows, game always respects game on the hardwood.

Ultimately, Beamon did what he aimed to do — prove to be one of the top one-on-one players in the country. He capitalized on the platform set forth by McGrady to bring together talented players who love the game and possess an uncanny skill. There had never been anything like it before.

McGrady may have invested in the talent, but Beamon knew he needed to work hard to earn it. He left everything out on the court and proudly represented New York.

“I’m from New York but we outside,” Beamon said on the loud mic to the fans.

Rohrssen raves about having had the opportunity to coach a “complete player” in Beamon. According to Rohrssen, it’s this one on one dynamic that brings out the best in a player both offensively and defensively.

“His skill set translates to both sides of the court,” Rohrssen said. “George always accepted the challenge of guarding the other team’s best player or top scorer so in one-on-one he already had a makeup to take on those battles.”

A lot of what Beamon learned along the way he attributes to his time at Manhattan. His teammates and coaches are like family to him. And with that comes a special appreciation for the coach who recruited him to live out his dream of being a Division One basketball player.

“He signed me to Manhattan College and believed in me,” Beamon said about Rohrssen. “I’m blessed that God put him in my life and to this day we still speak.”

Before his next professional endeavors, Beamon is hosting a one-on-one skills clinic later this month on Long Island to give back to the local youth in his community. Similar to how he found success, Beamon wants his campers and all young players willing to listen to just be themselves without worrying about becoming the next Tracy McGrady or George Beamon.

“I just want to give back to the community and help kids get better and stay off the streets or off video games to come outside,” Beamon said.

And if it’s just the beginning of Beamon’s one-on-one career,  any basketball fan would take delight in such a spectacle. He is the Mr. Worldwide for one-on-one hoops.