Give an inch, take a meter as poets celebrate at cafe 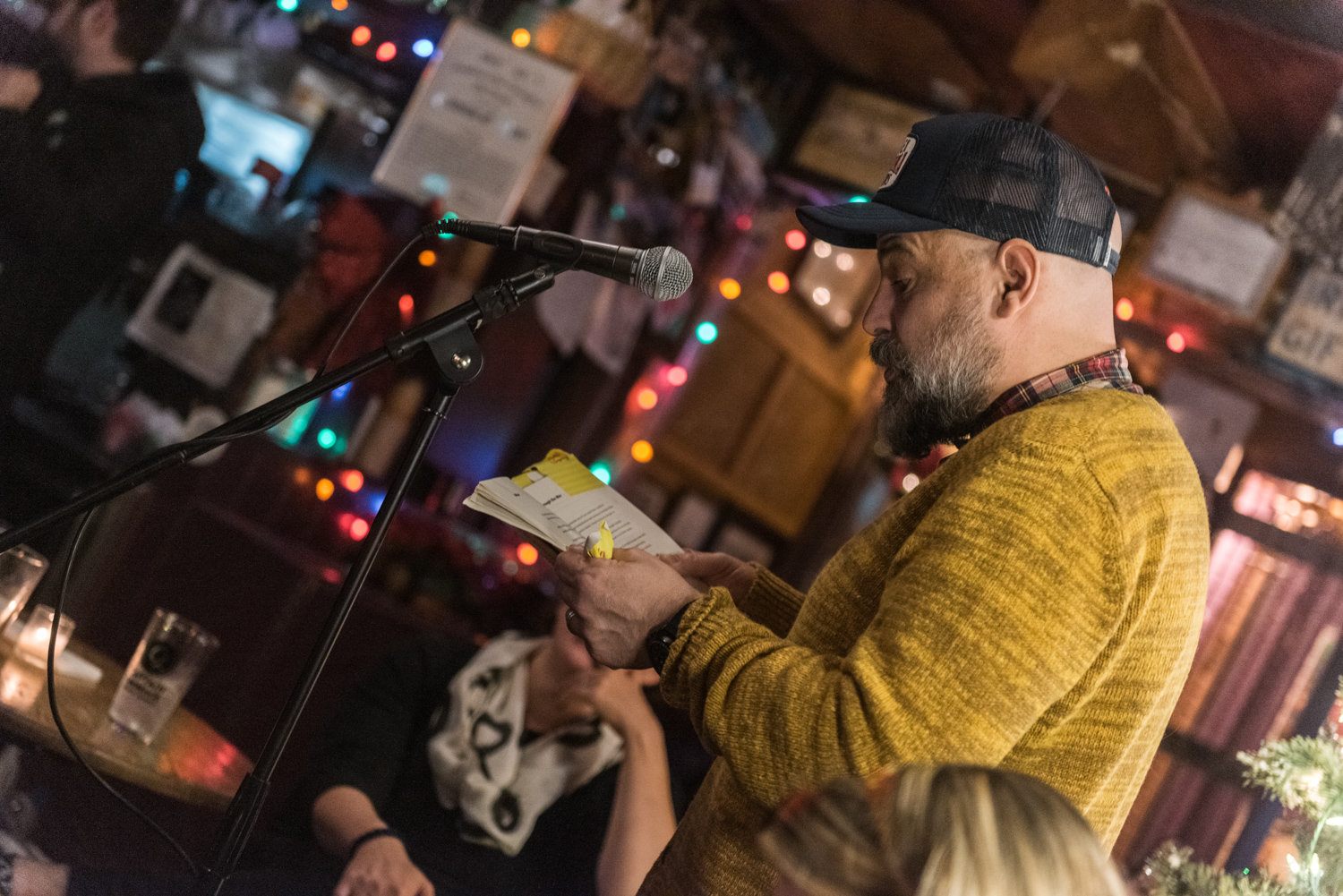 Timothy Donnelly reads a poem from his recently published book ‘The Problem of the Many’ at the 10-year anniversary of the Poor Mouth Writer’s Night at An Beal Bocht Cafe on Dec. 11.
NOAH BENUS 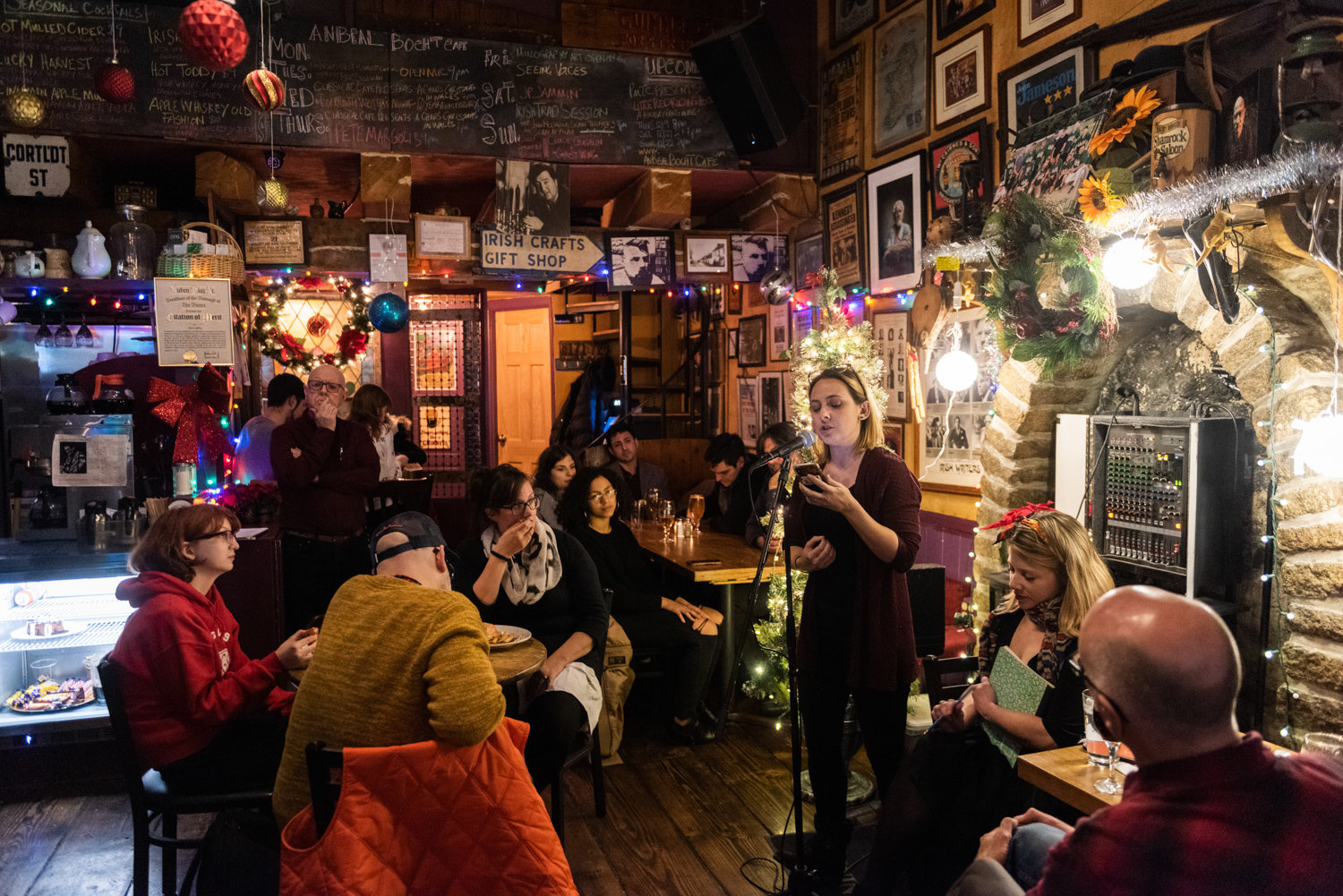 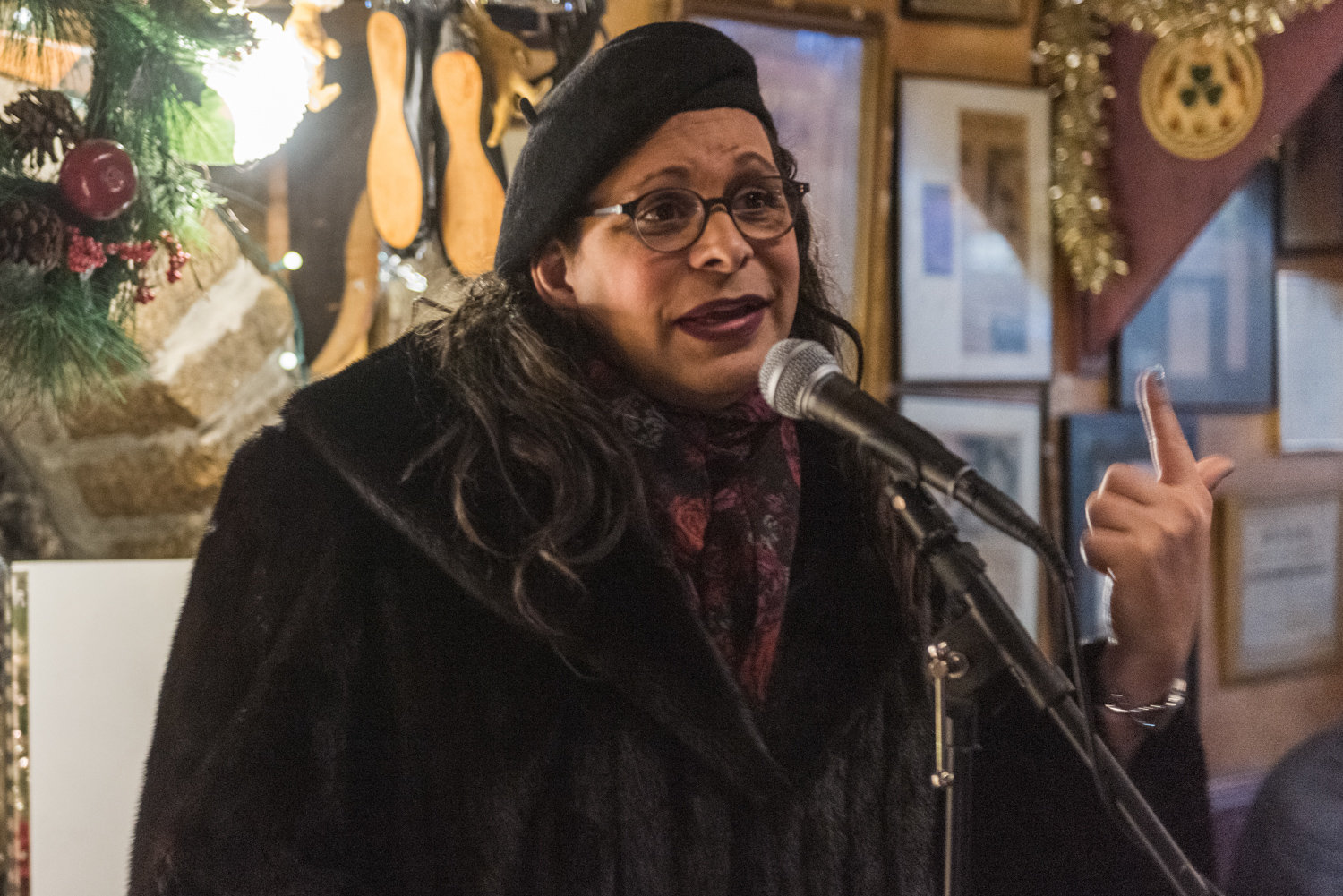 Jocelyn Carlisle performs a poem at a Dec. 11 reading marking the 10-year anniversary of the Poor Mouth Writer’s Night at An Beal Bocht Cafe.
NOAH BENUS 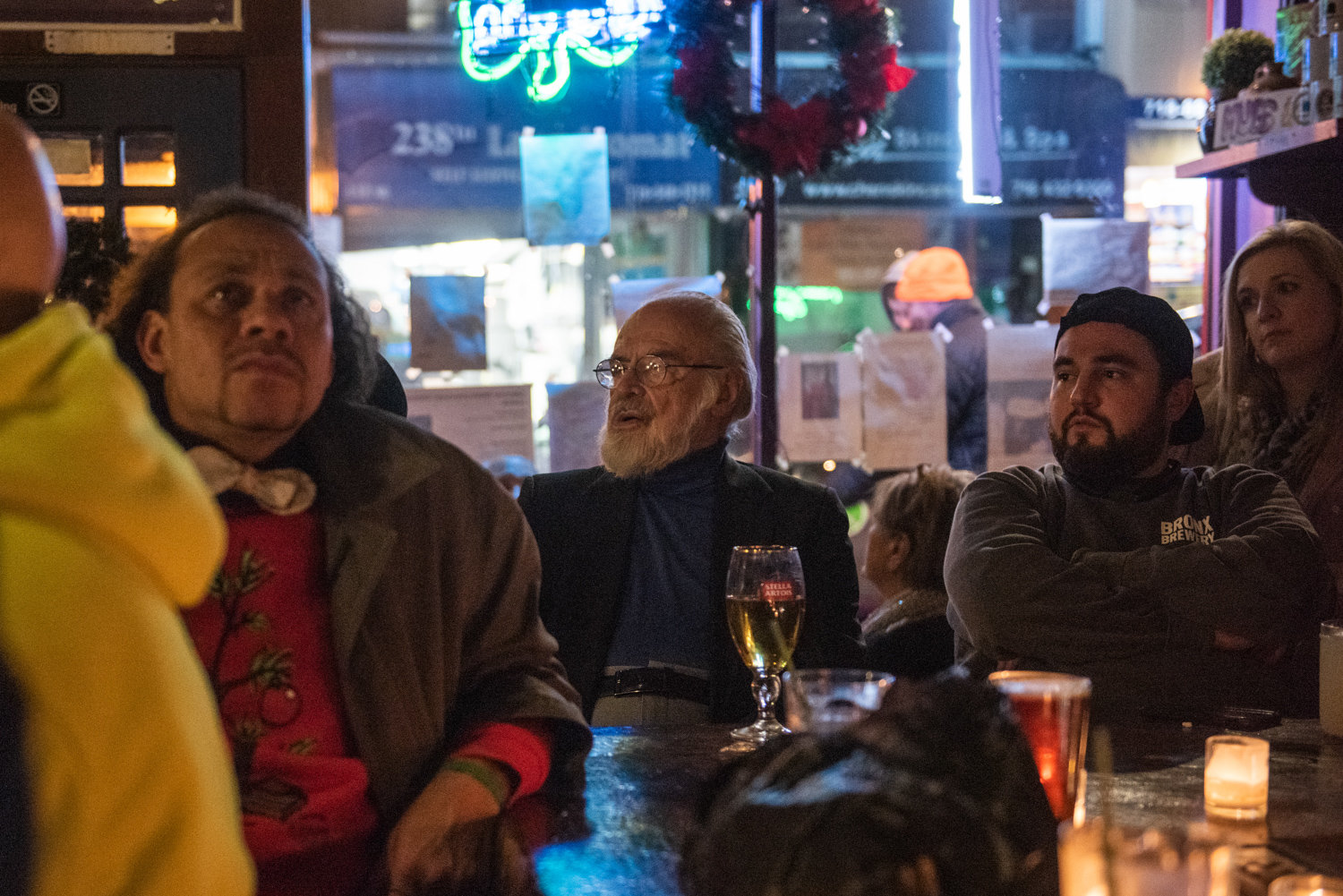 People listen to a poem at the 10-year anniversary celebration of the Poor Mouth Theatre Company’s writer’s night at An Beal Bocht Cafe.
NOAH BENUS 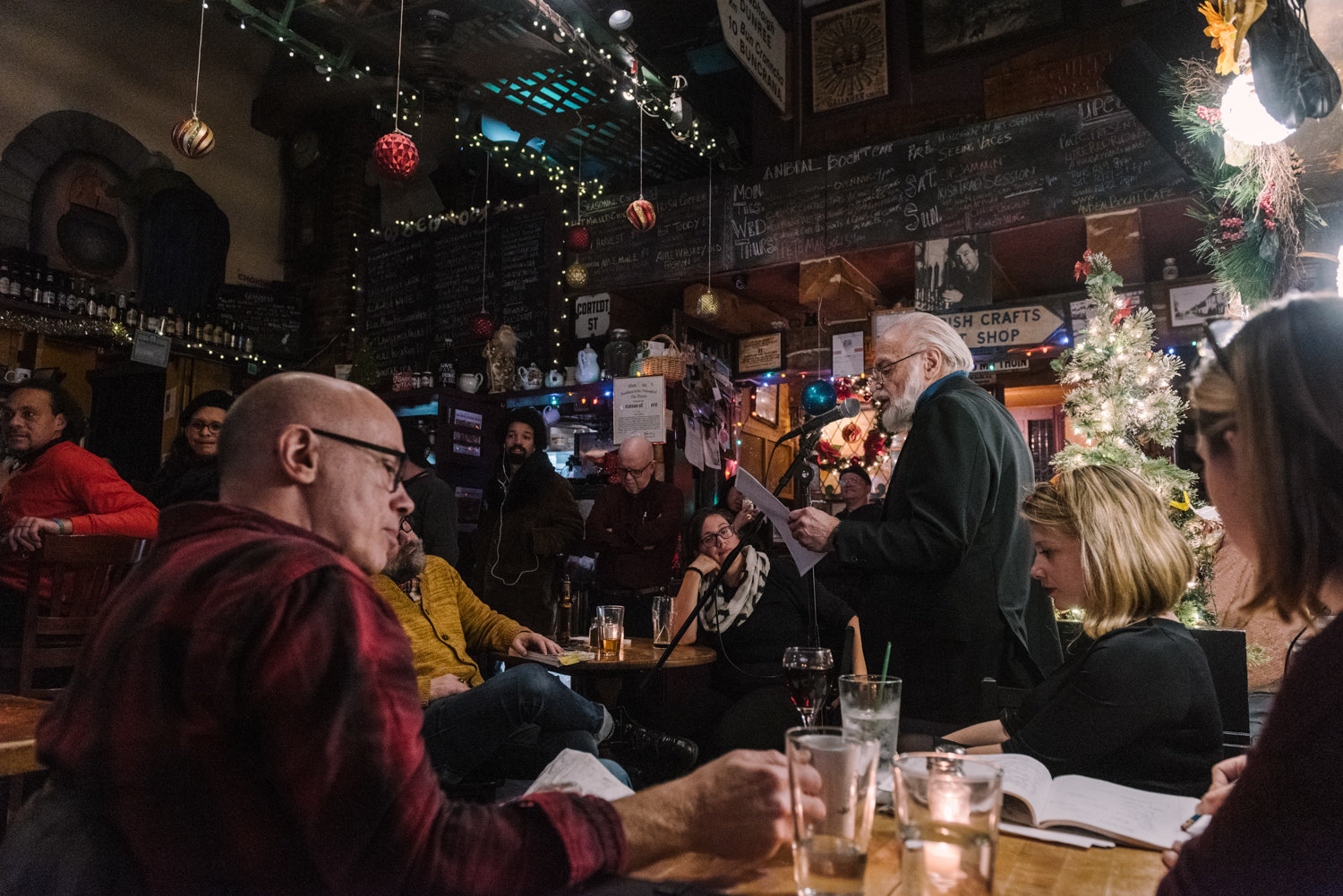 The Poor Mouth Theatre Company brings together poets and poetry aficionados alike for the 10-year anniversary of its writer’s night at An Beal Bocht Cafe.
NOAH BENUS
Previous Next
Standing up for values

Born in Providence, Rhode Island, Timothy Donnelly published his first poetry book, “Twenty-Seven Props for a Production of Eine Lebenszeit” in 2003 while serving as poetry editor for the Boston Review.

But Donnelly’s time with the literary magazine came to an end in 2018 after the magazine’s head fiction editor, Junot Diaz, was accused by several women of sexual harassment and targeted misogyny.

After some months of deliberation, the Boston Review’s board decided to keep Diaz, prompting others like Donnelly as well as poets B.K. Fischer and Stefania Heim to resign.

“We quit because our editors made a statement about retaining Diaz as an editor, and justifying the decision in a way that to us seemed very insensitive to other claims that had been made about him,” Donnelly said. “We felt strongly that Diaz should take a leave of absence, and the editor-in-chief said, ‘Well that’s what he wanted too,’ and we were very confused. Why wouldn’t they let him leave?

“They wouldn’t listen to us, so we left. They failed to listen to us and refused to reflect our values.”

As many an open mic poet knows, finding a decent venue that doesn’t run too late and has an audience that’s receptive and respectful seems like a myth.

Bushwick warehouses at 2 a.m., are filled with drunks and bitter writers. Greenwich Village hideouts are brimming with “flower power” ghosts from the past.

But then there’s An Beal Bocht Café.

On top of being home to Eric Sullivan’s longest-running open mic night, An Beal has played host to the Poor Mouth Writer’s Night, a monthly poetry open mic headed by Melinda Wilson, a visiting professor of English at Manhattan College, and Erin Lynn.

“I was an undergrad at Manhattan College,” Lynn said. “I wanted to start the open mic when I realized that, while I knew there were a lot of great writers in the area, I didn’t hear them very often. I was talking with the manager at the time and convinced him we should do a poetry-only open mic night.”

Within a few months, the open mic would boast a full evening of participants. At the time, Wilson taught poetry at LIM College. She brought her entire class up from Manhattan to the Irish café on West 238th Street to take part.

“Most of us teach,” Lynn said. “Not really possible to be a full-time poet.”

And yet, performing and hosting for a decade is worth much more than a shrug.

“We’ve been doing this for literally 10 years,” Wilson said. “It’s been great. We hear from the best and brightest.”

That best and brightest came from as far as Brooklyn and as near as Johnson Avenue for the 10th anniversary of the An Beal tradition last month.

Ron Kolm stood before the empty fireplace decorated by yellow Christmas lights on the chilly December evening, reading a series of brief poems to the barely illuminated audience.

One poem from the publisher of Sensitive Skin magazine was a celebration of An Beal Bocht Café itself.

“I’ve been writing for 60 years,” Kolm said. “And I’ve been reading here for years now. An Beal has been so important to me. And this is what I do. This is what I’ve always done.”

Kolm wasn’t the only one sharing rhymes about the café, but there was only one poet that read it in Irish: Matthew Ryan Shelton, who has been an active reader since 2011.

“I got a master’s degree in Belfast,” Shelton said. “I’ve been publishing in Irish for three years, but it’s not like I can read it aloud in many places. It’s amazing to bring a language that not a lot of people speak to a place where maybe, just maybe, someone would understand.”

The Poor Mouth Writer’s Night has never been a member’s only deal, however. Anyone can sign their name to this list, walk up to the mic, and perform.

Jocelyn Carlisle was one of those who performed for the first time that evening.

“I didn’t even know it was their 10th anniversary,” Carlisle said. “I would have brought something a little more recent. I wrote the one I performed when I was living in Beirut.”

Carlisle hasn’t lived here for long, but she’s a regular at An Beal.

“There’s an energy I just don’t find anywhere else,” she said.

Last on the long list of performers was probably one of poetry’s most decorated: Timothy Donnelly. He’s the recipient of the Guggenheim Fellowship, the Kingsley Tufts poetry award, and the Alice Fay di Castagnola Award.

Donnelly first performed at An Beal in 2016, but after an impassioned introduction by Lynn, it seemed as though Donnelly was a part of the café’s ocean of poets from the beginning.

Donnelly read from his recently published book, “The Problem of the Many.” His body moved in rhythm to his words, in front of an audience both tense and quiet.

“I’ve been living in Brooklyn for years and years now,” Donnelly said. “I came up here once or twice with my wife, and we’d stick around with friends and just listen to the interesting poets here. I only performed once, but recently Erin suggested I read for the anniversary, so I agreed. It’s an exciting place.”

With a decade of performances and readings now behind them, Lynn and Wilson ended the night by speaking with old friends and visitors, shaking the hands of poets and appreciative audience members, and having a beer with Donnelly. Despite the expectations of life and teaching, educating and writing, Lynn and Wilson considered the night a success.

“It’s the institution of An Beal that’s let us feel this good,” Wilson said. “There are sometimes people that say, ‘Oh what’s the point? Why perform? What’s the fun?’ And to those people I can only say that we know we’re having a good time.