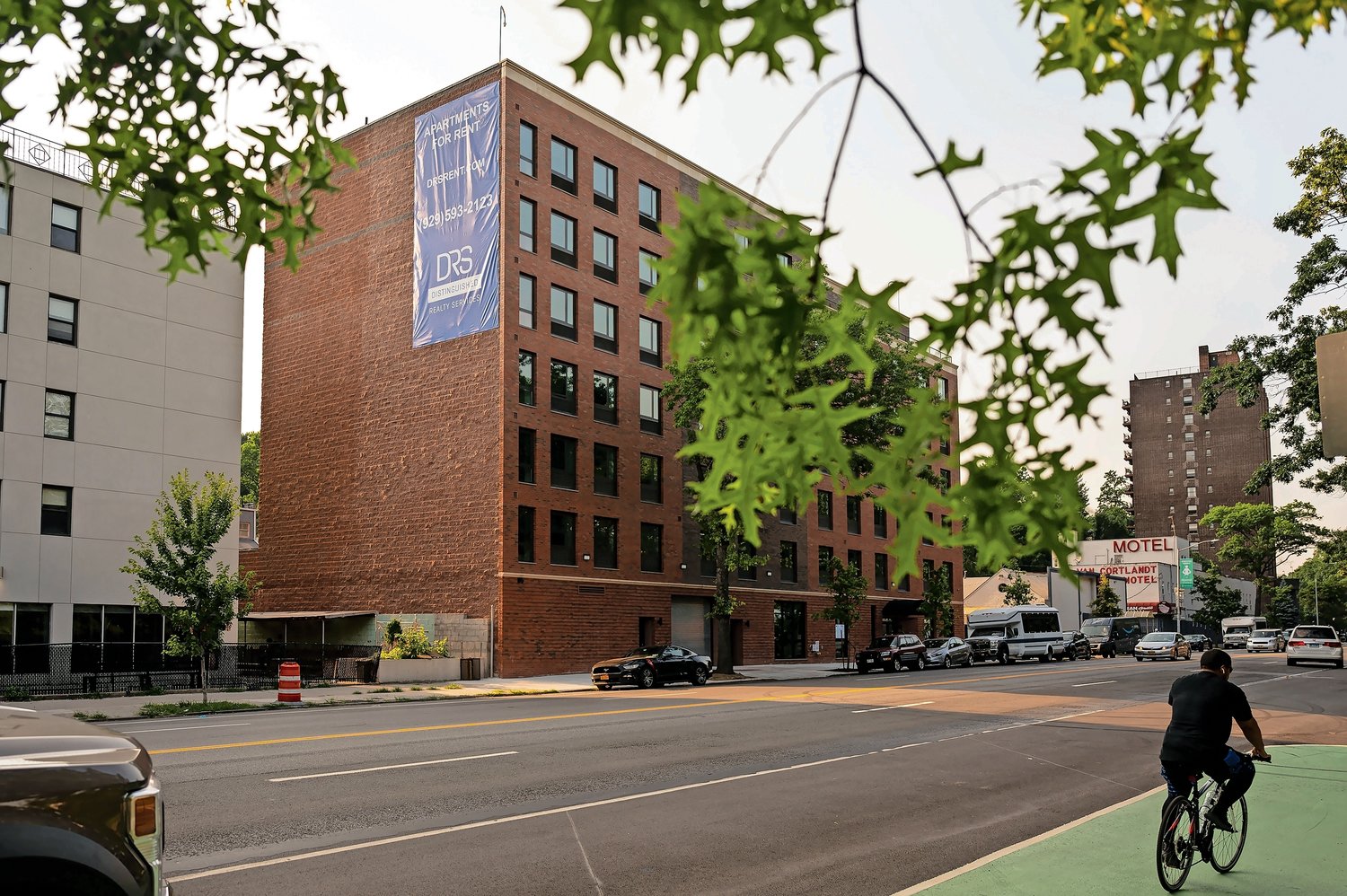 The exterior of 6327 Broadway on Wednesday evening. The apartment building is one of two that tenants have applied to live in via a lottery.
Hiram Alejandro Durán 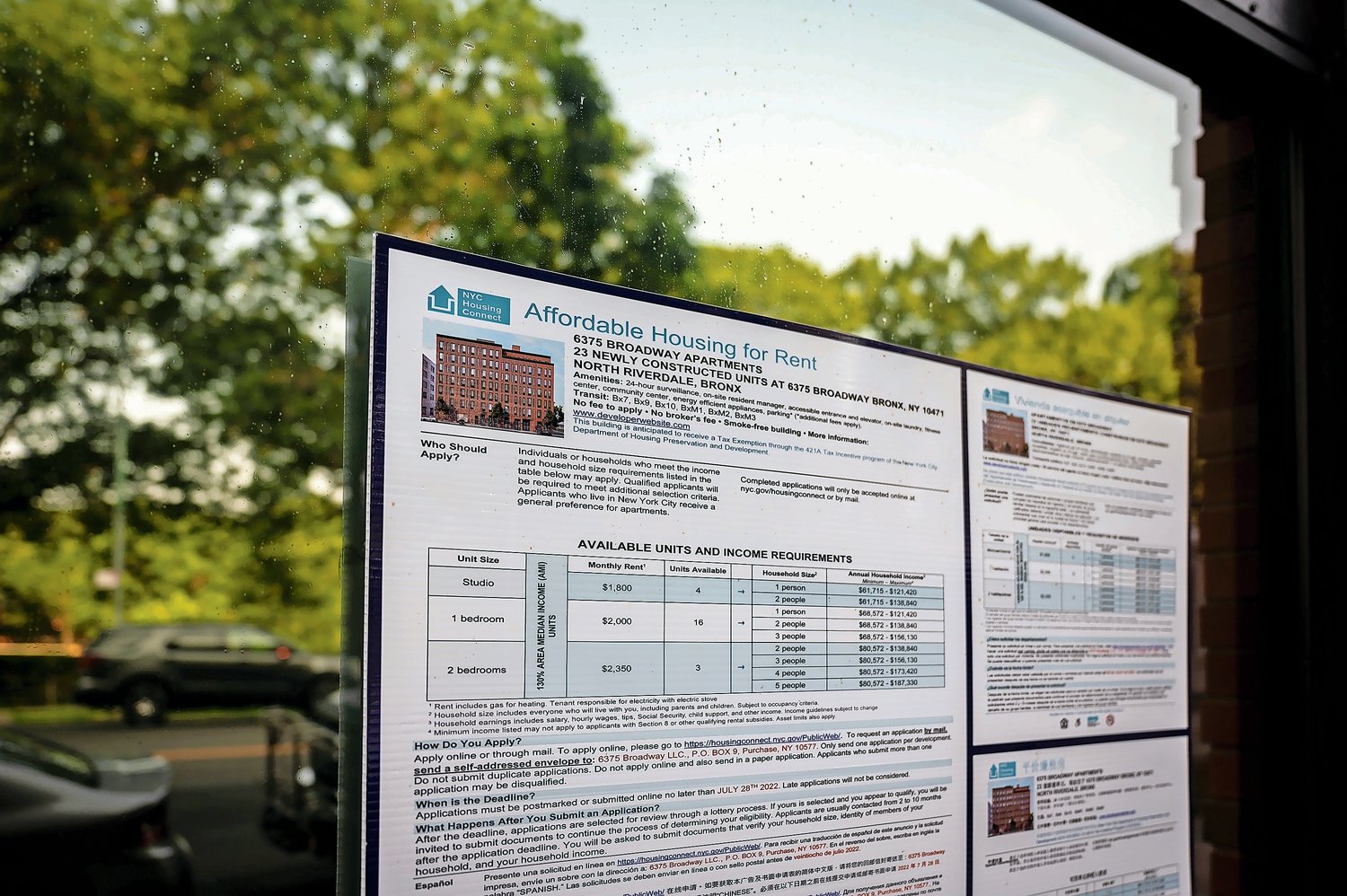 The income requirements breakdown on a board near the main entrance of 6327 Broadway on Wednesday, July 20, 2022.
Hiram Alejandro Durán
Previous Next
By Abigail Nehring

The housing lottery is open for a pair of new seven-story apartment buildings erected by Mark Stagg over the last 18 months, flanking the north and south sides of the Henry Hudson Parkway overpass.

Abutting the Fieldston historic district on the southerly side is 6327 Broadway, a 90-unit building that includes a fitness center, laundry room, and parking for 79 vehicles.

Precision Real Estate Management, which is handling 6327 Broadway, say they received more than 10,000 applications for 27 units in the first two weeks since the lottery opened on NYC Housing Connect. It will stop accepting new applications Sept. 8.

Not included in the lottery are the building’s remaining 43 market-rate units, where one-bedroom apartments start at $2,075. These units are rent stabilized, so future rent hikes will be set by the city’s rent guidelines board.

On the other side of the underpass is 6375 Broadway, a smaller building with similar features sandwiched between the W Assisted Living and the Van Cortlandt Motel. Units there are 10-15 percent cheaper, and the building has had a head start on leasing since June 1. As of last Wednesday, there were 15 of 42 market-rate units remaining.

The new construction is the handiwork of developer Mark Stagg, whose buildings proliferate across the Bronx and Westchester County. City property records compiled by JustFix and the Association for Neighborhood and Housing Development show that Stagg Group owns 151 occupied rental properties in New York City, and has also been one of its most avid pandemic-era evictors. Since 2017, Stagg Group filed evictions against 402 households in the Bronx, according JustFix’s analysis, and city marshals have carried out 101, the 11th highest eviction rate per housing unit for any one landlord in the city during this time period.

There were no marshal evictions at any of Stagg’s properties during the statewide eviction moratorium that ended in January this year. And there have been none so far in 2022, Stagg said.

The Press’ own analysis of open construction permits shows Stagg’s expansion. His rental portfolio will increase to 163 buildings in the coming months, comprising close to 4,000 housing units, two-thirds of which have built since 2006.

Stagg expects it will take about 90 days to lease the market-rate units in his two new buildings on Broadway, and six months to fill the units leased through the city housing lottery.

The Broadway strip on either side of the overpass forms the seam between Fieldston, North Riverdale, and Kingsbridge, three neighborhoods that lend Community Board 8 its unique urban and suburban character, which urban planning decisions prefigured in the last century and set out in city zoning maps.

A stone’s throw away is one of the oldest surviving structures in the Bronx — Hadley House — a farmhouse built in the 18th century and acquired by Joseph Delafield in 1829. They also aren’t far from the Van Cortlandt House, the borough’s oldest building, constructed in 1748 that’s now a museum inside its namesake park.

The two seven-story buildings are the tallest permitted in that location. They take advantage of a zoning rule that permits additional height in exchange for a community center on the ground floor of mixed-use buildings. A day care center is slated for 6327 Broadway.

Stagg Group and its contractors hold city permits on a half dozen developments currently, which will yield more than 500 units in the coming months according to building plans in public records.

For now, they represent the last of Stagg Group’s 421-a “Affordable New York” developments, the property tax exemption program ended in June after lawmakers allowed it to expire. For a half a century, 421-a has been the state’s single largest real estate expenditure program. It’s been in place almost continuously during that time, with sporadic updates, including changes in 2017 that rebranded the program as an affordability program.

City comptroller Brad Lander spearheaded the campaign to end 421-a, which he is quick to point out has cost the city $1.77 billion in lost tax revenue annually.

“And we don’t get meaningful affordable housing in return,” Lander said.

He led a series of town halls this spring to hear from New Yorkers about how to make property taxes more fair. Lander told The Riverdale Press he sees an opening this year for New York to take on its unwieldy property tax system in the wake of 421-a.

“What it needs to be replaced with is comprehensive property tax reform,” Lander said. “Now we have to commit to building a broad citywide coalition.

“Albany’s not in session until January, so essentially, we have the next five months, and change, to build on the town halls, to build on the press conference we had last month and keep getting more and more legislators and elected officials on board. It will be important ultimately to get the governor on board, so there’s a lot of conversations underway and a lot of organizing.”

For decades, Mark Stagg has been one of the greatest successes of 421-a. It has formed the basis of his business model as Stagg Group has taken on larger and taller developments, producing thousands of rent stabilized and income-restricted housing units with luxury features like quartz countertops and hardwood floors.

“What makes us unique is the price point,” said Tyler Stagg, a recent recruit into the family business along with his brothers Ryan and Justin. Tyler works with Precision Real Estate Management, which is leasing the units at the two buildings on Broadway.

“The developer puts everything he has into these units,” he said. “He puts his heart and soul in it and doesn’t hold back with the budget, whether it’s here or the other side of the Bronx. We’re really upping the game.”

In the most popular version of 421-a, owners receive a property tax exemption for 35-years in exchange for reserving a certain portion of units for income-restricted tenants.

About three-quarters of the affordable units the program has produced have gone to people making 130 percent area median income, as will be the case at 6327 and 6375 Broadway in Riverdale.

The figure is set by the federal government and determines income guidelines for many of the city’s affordable housing programs, including former mayor Bill de Blasio’s zoning initiative, mandatory inclusionary housing, which allows for up to 115 percent area median income.

“Affordable means income-targeted, so you can target very low incomes,” Sam Stein, an analyst with Community Service Society, a charitable organization that advocates for more equality in housing.

“To be fair, we see both, but 421-a is targeted at the high end. And me and a lot of other people have criticized it. They question why we’re calling it affordable if it’s for people making 130 percent (area median income) and yet the local income is more like 50 percent.”