Grappling with life amongst the boys 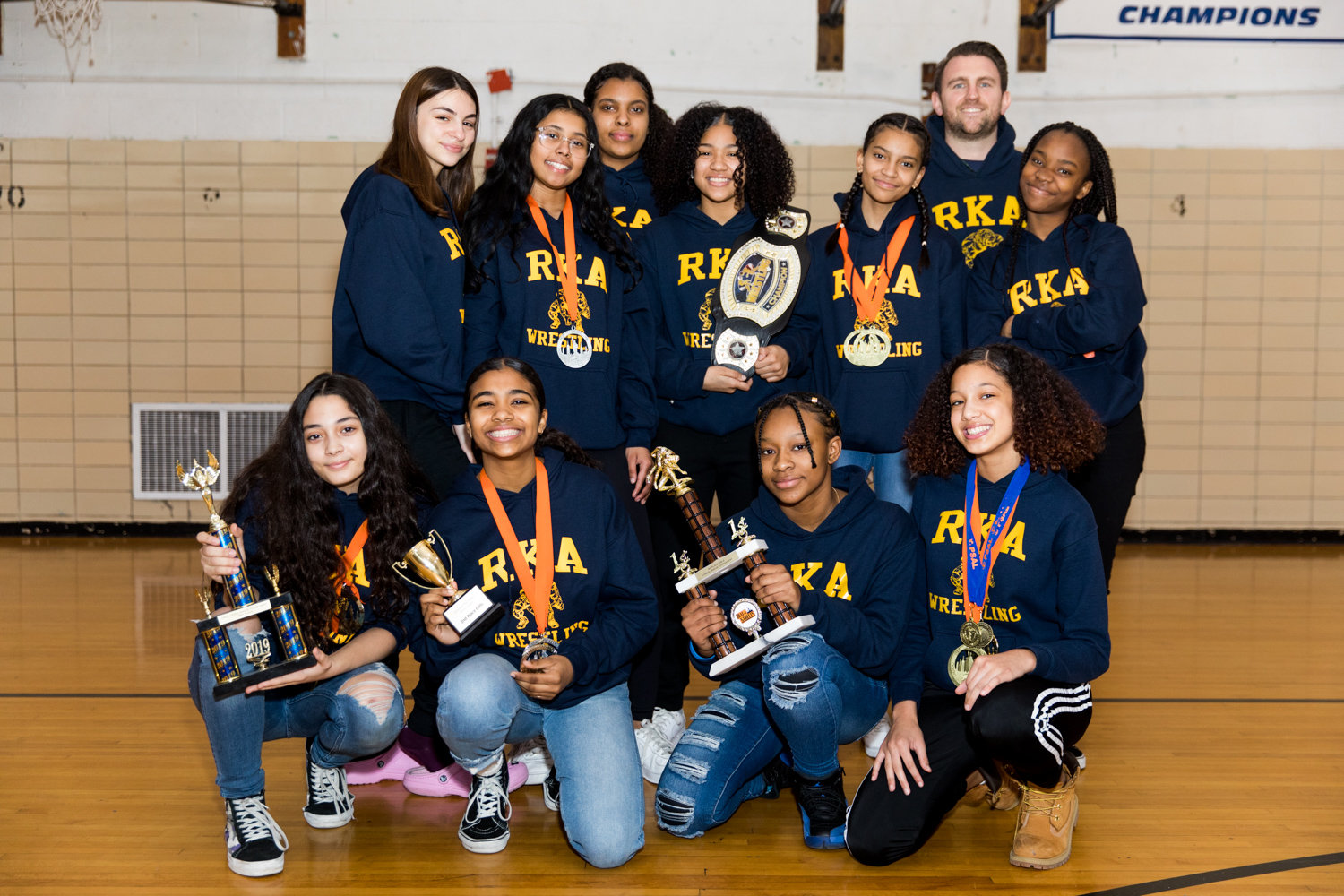 Riverdale/Kingsbridge Academy wrestling coach Michael Lepetit poses with some of his girls that have helped make the Tigers’ middle and high school wrestling teams so successful.
JULIUS CONSTANTINE MOTAL 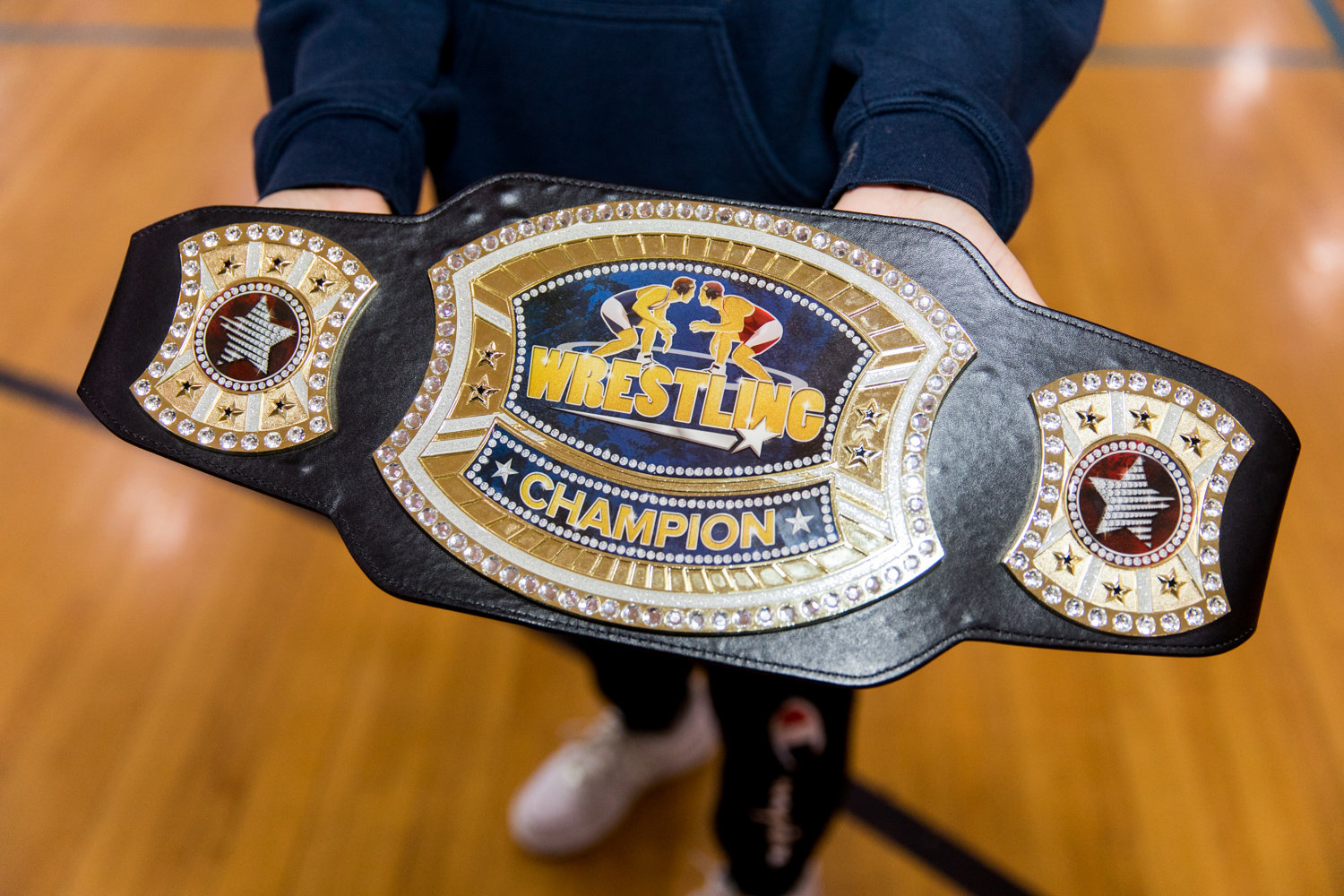 A championship belt is just one of the many trophies the Riverdale/Kingsbridge Academy middle and high school wrestling programs have captured over the past two seasons.
JULIUS CONSTANTINE MOTAL
Previous Next
By SEAN BRENNAN

Michael Lepetit didn’t know what he was getting into when he took over as head coach of the Riverdale/Kingsbridge Academy boys wrestling team four years ago. He took the job, he said, because no one else would, and he didn’t want to see the program fold.

Fast-forward to this year, and again Lepetit didn’t know what to expect when the wrestling season kicked off. This time the uncertainty centered around the extreme youth comprising his roster.

Not to mention six members of the boys teams are actually girls. And two of those — freshmen Destiny Gibson and Lexi Elson — are all business on the wrestling mat.

“They really are kind of quiet,” Lepetit said. “But when they wrestle … ”

Lepetit didn’t finish his sentence, but quickly segued into a story of Elson’s first wrestling experience as an RKA middle-schooler.

“We were in a tournament and she was the first match of the day. Right away she gets popped in her nose, and there’s blood everywhere,” Lepetit said. “Her parents are there and I’m thinking, ‘They’re going to kill me.’ So we patch her up and we sit her on the sideline with tissues up her nose.”

That’s when another coach, this one from Eagle Academy just outside Claremont came over and offered a proposal.

“Does that girl want to wrestle? I have a boy the same weight.’”

“So I said, ‘Let me ask her,’” Lepetit said. “So I said to Lexi, ‘Are you interested in wrestling?’ and she just threw her glasses off and ripped the tissue out of her nose and she ran back out there. She was really into it.”

Elson did not win that match, but she certainly caught the wrestling bug. Since that day two years ago, Elson won city championships in seventh grade in the 78-pound weight class, and again in eighth grade in the 84-pound class. She is now a key member of the RKA boys high school team that went 7-1 this season, narrowly missing the postseason.

Gibson captured third place last year as an eighth grader in the 115-pound weight class, and like Elson, was a key contributor to her team this season.

“I didn’t think a lot of people wrestled,” Gibson said. “I knew it was a sport because of WWE. But when I got into it, I just liked it a lot, so I just stuck with it.”

Elson’s journey to the team passed straight through RKA’s volleyball program. Coach John Reingold asked Elson to join and follow in the footsteps of her older sister, Amber, who won a volleyball city championship at RKA two years ago.

“I didn’t want to play volleyball,” Elson said. “But I used to fight with my sister a lot, so wrestling looked like fun to me.”

And Pacheco credits both Gibson and Elson with sparking her interest in wrestling.

“I went to a match and I saw Destiny and Lexi wrestling, and I thought it was very interesting,” Pacheco said. “But when I joined (middle school), I didn’t really think I was that good. But I just practiced more and more, and just got better.”

And yes, there has been the odd occasion when the girls were pitted against a boy.

“They’re on a boys team, but if they tell me they don’t want to wrestle a boy or if their parents tell me they don’t want them to, then I don’t make them wrestle,” Lepetit said. “We did go to a lot of tournaments that had girl brackets. But we had a match against A.P. Randolph High School, and I knew Destiny could wrestle with the boys. She went out there and she beat him right away.

Lepetit remembered there was pressure to succeed when he took over as coach, and now credits grapplers like Gibson and Elson with helping him restore the program.

“About 10 years ago we were city champs as a team,” Lepetit said. “New York City’s first ever state championship went to RKA. The popularity was high back then, but then it died down. But I think with the success of our middle-schoolers, more kids want to join our program.

“Volleyball is popular here because they’ve been successful. Now we’re becoming successful in wrestling in both middle school and high school.”

Thanks in no small part to Gibson and Elson.