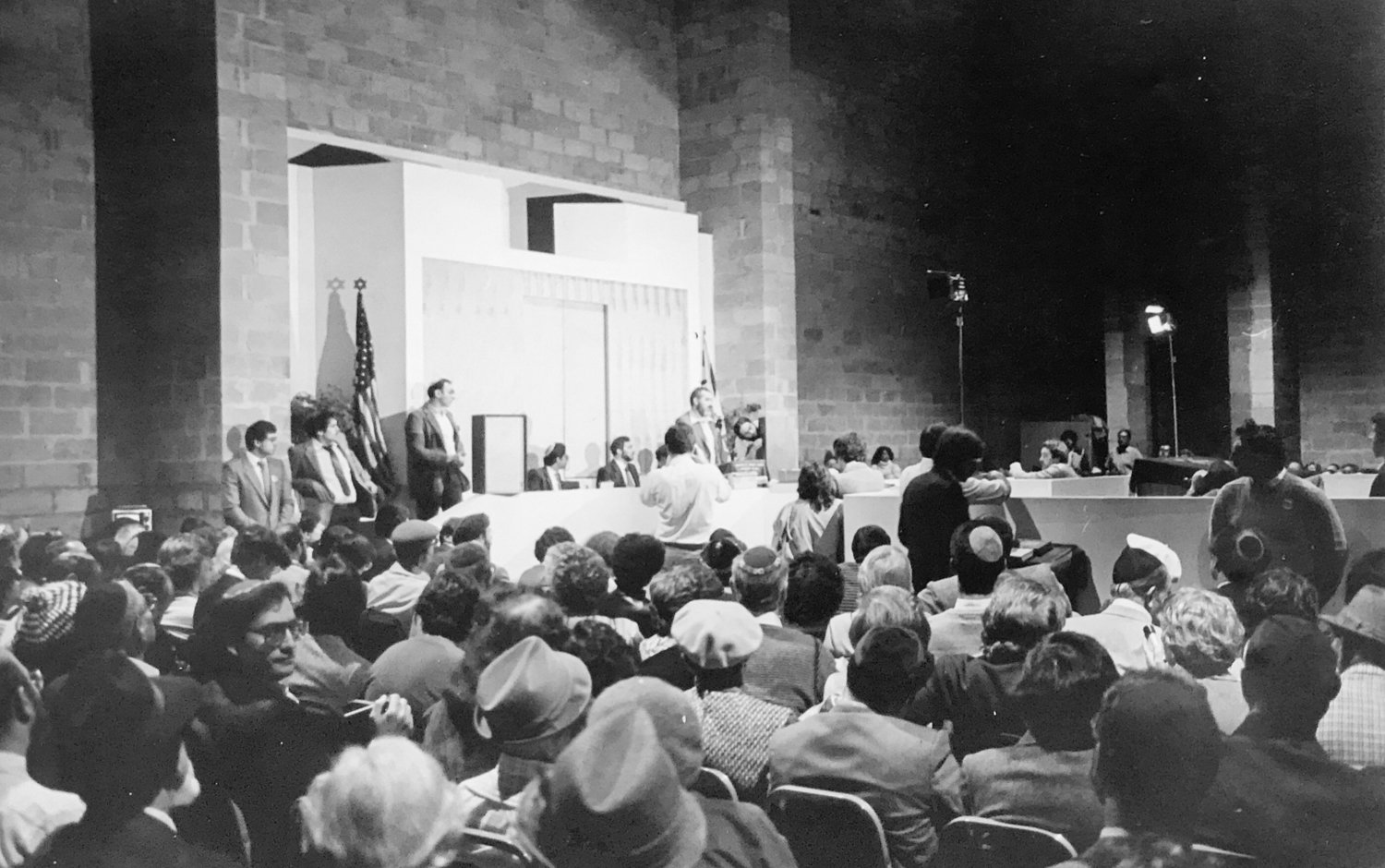 In 1984, more than 800 people filled the Hebrew Institute of Riverdale on Henry Hudson Parkway to hear a debate between firebrand Rabbi Meir Kahane and then-Harvard law professor Alan Dershowitz. Kahane believed Israel should exist only for Jews, while Dershowitz pushed for a union between Judaism and democracy in the country.
RICHARD BRENNER / File 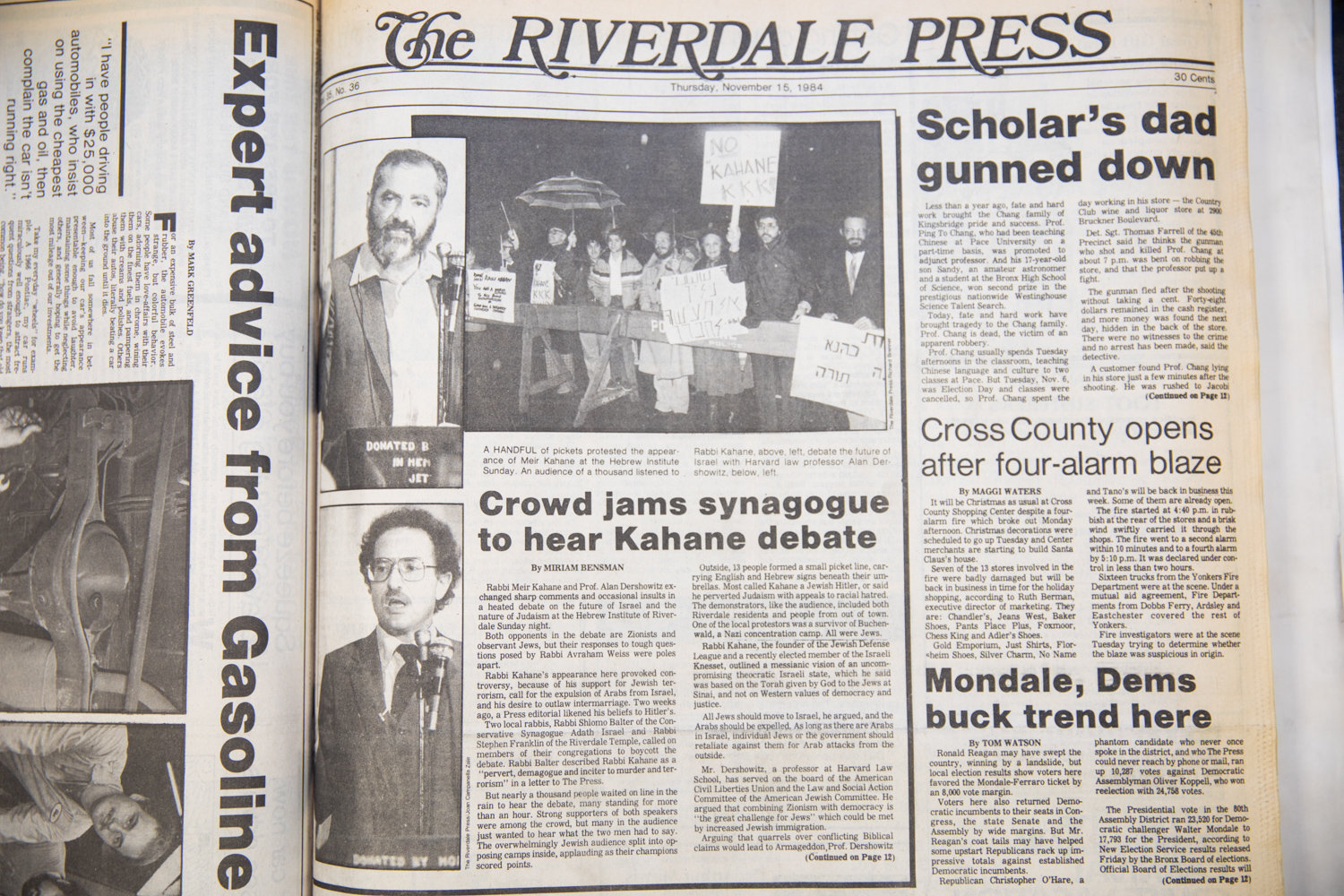 The March 1, 1984 edition of The Riverdale Press provided extensive coverage of the debate between then-Harvard Law School professor Alan Dershowitz and Rabbi Meir Kahane. While both were observant Jews and Zionists, they had sharply different opinions on the future of Israel.
JULIUS CONSTANTINE MOTAL 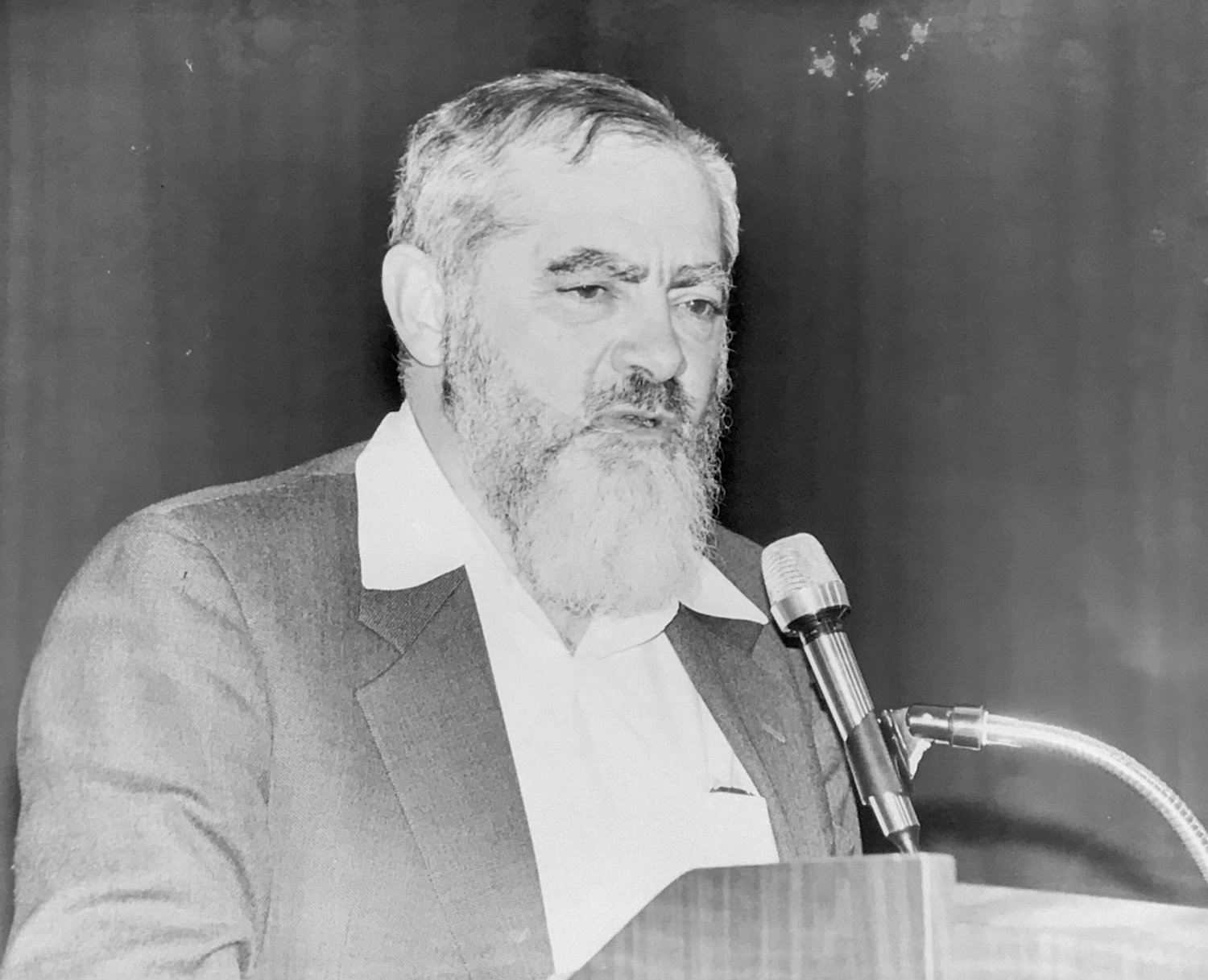 Rabbi Meir Kahane had sharp words for The Riverdale Press and two local rabbis in a speech he gave at The Riverdale Y on Feb. 25, 1990. He expressed what many described as extremist views in a 1984 debate about the future of Israel between him and then-Harvard Law School professor Alan Dershowitz.
GRETCHEN McHUGH / File 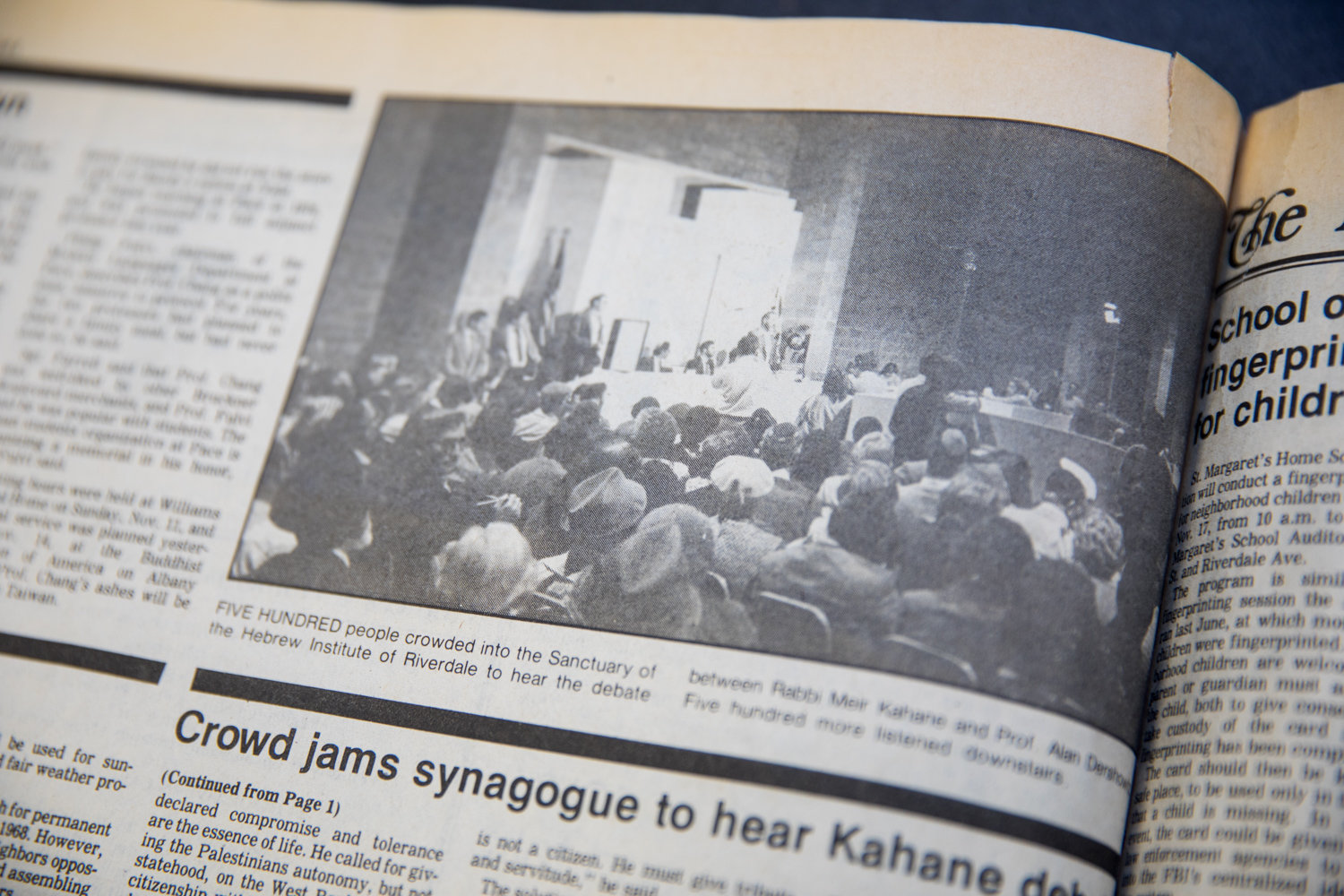 Few things can pack a space quite like the contentious 1984 debate between firebrand Rabbi Meir Kahane and then-Harvard Law School professor Alan Dershowitz did at the Hebrew Institute of Riverdale, which drew more than 800 people.
JULIUS CONSTANTINE MOTAL 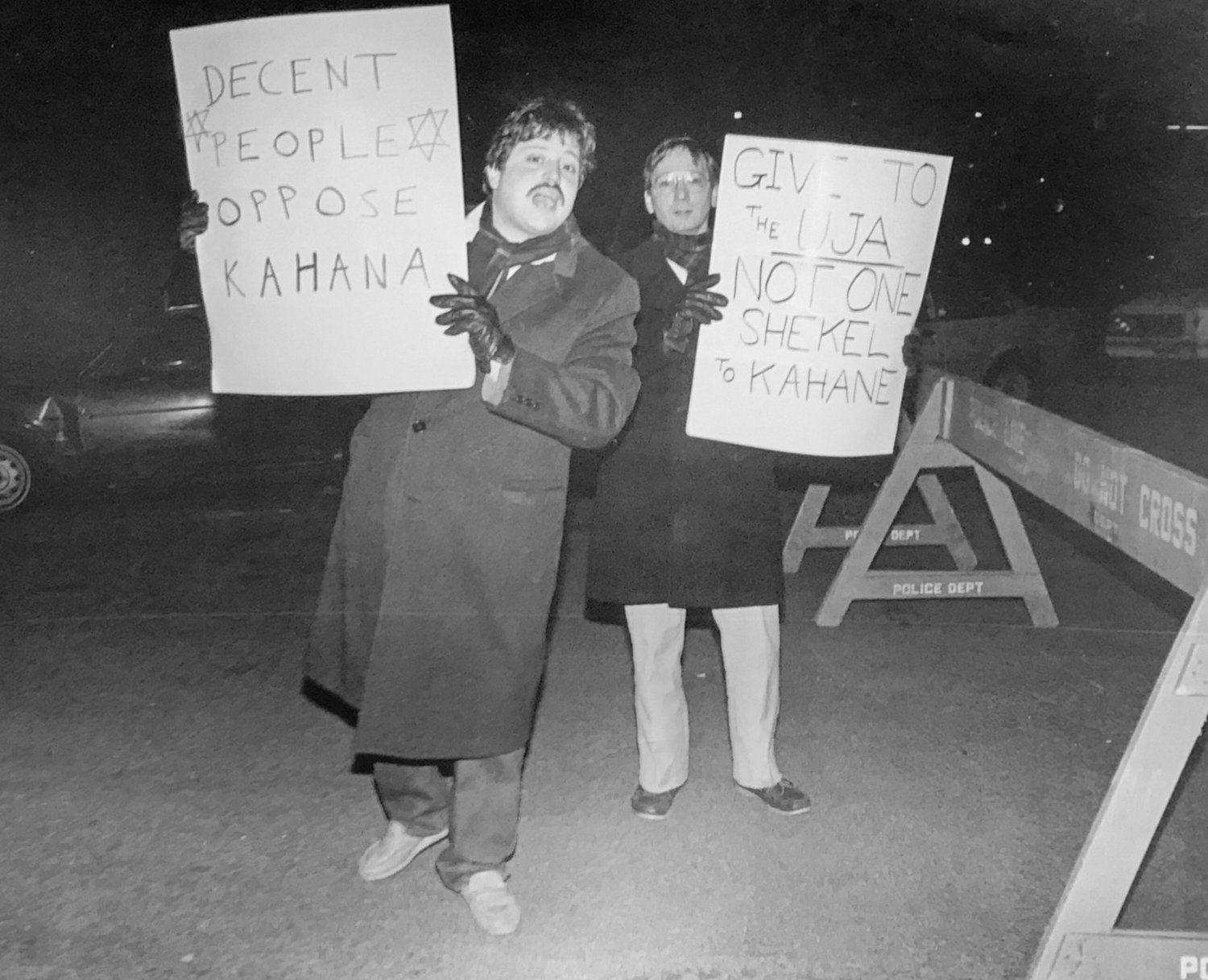 A 1988 debate between Rabbis Meir Kahane and Irving Greenberg at the Hebrew Institute of Riverdale drew protesters opposed to Kahane, who’d made an appearance four years earlier in a debate against then-Harvard Law School professor Alan Dershowitz.
GRETCHEN McHUGH / File
Previous Next
Then & Now

When people of the 20th century looked toward “far future” years like 2020, they likely imagined a utopia where most everyone got along, where hatred was a relic of the past, and where the primary mode of transportation were flying cars.

We’re here in 2020 now, and while we hope life is indeed better for many of us than it was in decades past, it seems political divides are deeper than ever, racism and anti-Semitism — not to forget homophobia and transphobia — appear to have become much more commonplace, and all of our vehicles are still pretty much grounded.

Curbing anti-Semitism has been tricky, even here in New York City, whether it’s a swastika on the front door of a Fieldston home, to horrific violence against Jews. Efforts like the Solidarity March Against Anti-Semitism across the Brooklyn Bridge shouldn’t even be needed today, but it is, and desperately.

Some years ago, however, one man had a much different approach on how to combat anti-Semitism. While some fought to give this rabbi a platform to at least share his views — no matter how unpopular — others fought him every step of the way. Even right here in Riverdale in what some still refer to as the “great debate.”

It was Nov. 10, 1984. Just four days before, President Ronald Reagan had won a decisive victory over former vice president Walter Mondale, yet more than 1,000 people stood in the rain outside of the Hebrew Institute of Riverdale hoping to get a seat for a debate not to decide who should hold high office, but on the future of Israel itself.

On one side was lawyer and academic Alan Dershowitz a decade before he would be part of O.J. Simpson’s legal “dream team” in his double-homicide trial. On the other is a name many under 50 may not even recognize — Meir Kahane, a founder of the Jewish Defense League who was once convicted of conspiracy to manufacture explosives, who just that year had been elected to Israel’s parliament, the Knesset.

Kahane’s mere attendance generated significant controversy, even in the pages of The Riverdale Press. Just two weeks before, editor Bernard Stein called for protests in front of the Henry Hudson Parkway debate forum, writing that Kahane’s “presence in a community that has worked hard to forge bonds between Jews and non-Jews is an insult. His presence in a community that has suffered terribly from the murderous racism of the Nazis is an insult. His appeals to racist ‘solutions’ to the problem of Israel’s survival insult the memory of martyred European Jewry.”

Kahane had created the JDL as a way to provide armed protection for Jews living in non-Jewish parts of the city, like Brooklyn’s Crown Heights. After emigrating to Israel in the 1970s, he gained prominence with some by promoting a full expulsion of Israel’s Arab population, an opposition to democracy out of fear Jews could someday become a minority in the country, and even opposing marriage or just sexual relations between Jews and non-Jews.

Dershowitz would share his insights of this debate in his 1992 book “Chutzpah.” Both had come from the same part of Brooklyn, and even attended the same school, Yeshiva University High School — albeit at different times.

Kahane’s father actually bought his wedding ring for Kahane’s mother from Dershowitz’s grandfather. But Dershowitz maintained “Kahane was no part of anything I stand for or identify with.”

Two rabbis followed the heed of The Press and encouraged their members to boycott the event: Shlomo Balter of Conservative Synagogue Adath Israel of Riverdale, and Stephen Franklin of Riverdale Temple. Balter even went as far as calling Kahane a “pervert, demagogue and inciter to murder and terrorism.”

Only a dozen or so protesters showed up for the debate, standing in the rain. Inside, the 800 people who could get seats — along with Press reporter Miriam Bensman — heard the two men take up their opposing views on being Jewish, and building a stronger Israel.

Kahane believed Jews must choose between democracy and Zionism because Arabs could outnumber Jews in Israel in 30 years.

“The Halakha is clear,” Kahane said about Jewish law. “A non-Jew cannot be a citizen, cannot be elected, has no national rights. We must treat the resident stranger well — but he is not a citizen. He must give tribute and servitude.”

Dershowitz, on the other hand, sad that combining Zionism with democracy is “the great challenge for Jews,” which if solved correctly, could be met by increased Jewish immigration. While he believed Palestinians should be granted autonomy, Dershowitz didn’t support statehood.

Dershowitz also contested Kahane’s claims Jews should only support other Jews, and “not to blacks or Chinese people or anyone else.”

“There is another Judaism, which is embracing,” Dershowitz said. “There is a Judaism which doesn’t require us to choose between neo-fascism and democracy. I want my children to remember the message of Martin Luther King … and to cry bitter tears for the Japanese people imprisoned during World War II.”

After the debate, Riverdale Jewish Community Council president Mark Friedlander took The Press to task for its original editorial scorching Kahane, to the point of comparing him to Adolf Hitler.

“The Riverdale Jewish Community Council cannot accept with equanimity a Press suggestion that some Riverdale Jews ought to ‘picket’ the premises of another Riverdale Jewish organization,” Friedlander wrote in a letter to the editor, after the debate. “This runs counter to the entire philosophy of an umbrella group which seeks to bring all Jews closer together. The Press, in effect, sought to inject divisiveness and strife into the Jewish community, to set one Riverdale Jew against another.”

But that didn’t slow down the paper, or some of the local Jewish leaders opposed to Kahane views. Six years later, Kahane would make another visit to the community, this time to a much smaller crowd at The Riverdale Y. Stein once again took out his pen and blasted the rabbi, labeling him a “hate monger.”

“In a rapidly changing world, religious fanaticism and narrow nationalism have become the most immediate threats to human progress,” Stein wrote. “Meir Kahane has fused the two into a program calculated to bring centuries of blood and sorrow to the people of the Middle East, and to threaten international equilibrium.”

Kahane responded by calling Stein and his brother Richard “self-righteous liberals and self-hating Jews,” and rabbis Franklin and Balter “paragons of ignorance.”

Referring to the Belarus city where tens of thousands of Jews were killed in a ghetto there during World War II, Kahane warned that “one day the problem” of anti-Semitism “will reach Riverdale.”

“Don’t think that you Steins are safe here,” Kahane said. “Today you attack the JDL. One day, you will call on the JDL to protect you. After all, you can take the Jew out of Pinsk, but you can’t take Pinsk out of the Jew.”

Kahane would never have much of a chance to see if that day would come. Just a few months later, on Nov. 5, 1990, Kahane was shot and killed after a speech in Manhattan by El Sayyid Nosair, who was later connected to the early formation of al-Qaida, and the 1993 World Trade Center bombing.

Dershowitz, in the meantime, returned to his work at Harvard Law School, retiring in 2013. He would be part of legal teams representing the likes of boxer Mike Tyson and heiress Patty Hearst. He most recently became a member of President Donald Trump’s legal defense team during Trump’s Senate impeachment trial.

About that debate? In his 1992 book, Dershowitz said it was “surprisingly substantive.” He defended giving Kahane a platform to share his views because “it is imperative that the world understand not only that the vast majority of Jews repudiate Rabbi Kahane’s views, but also why we repudiate those views.”