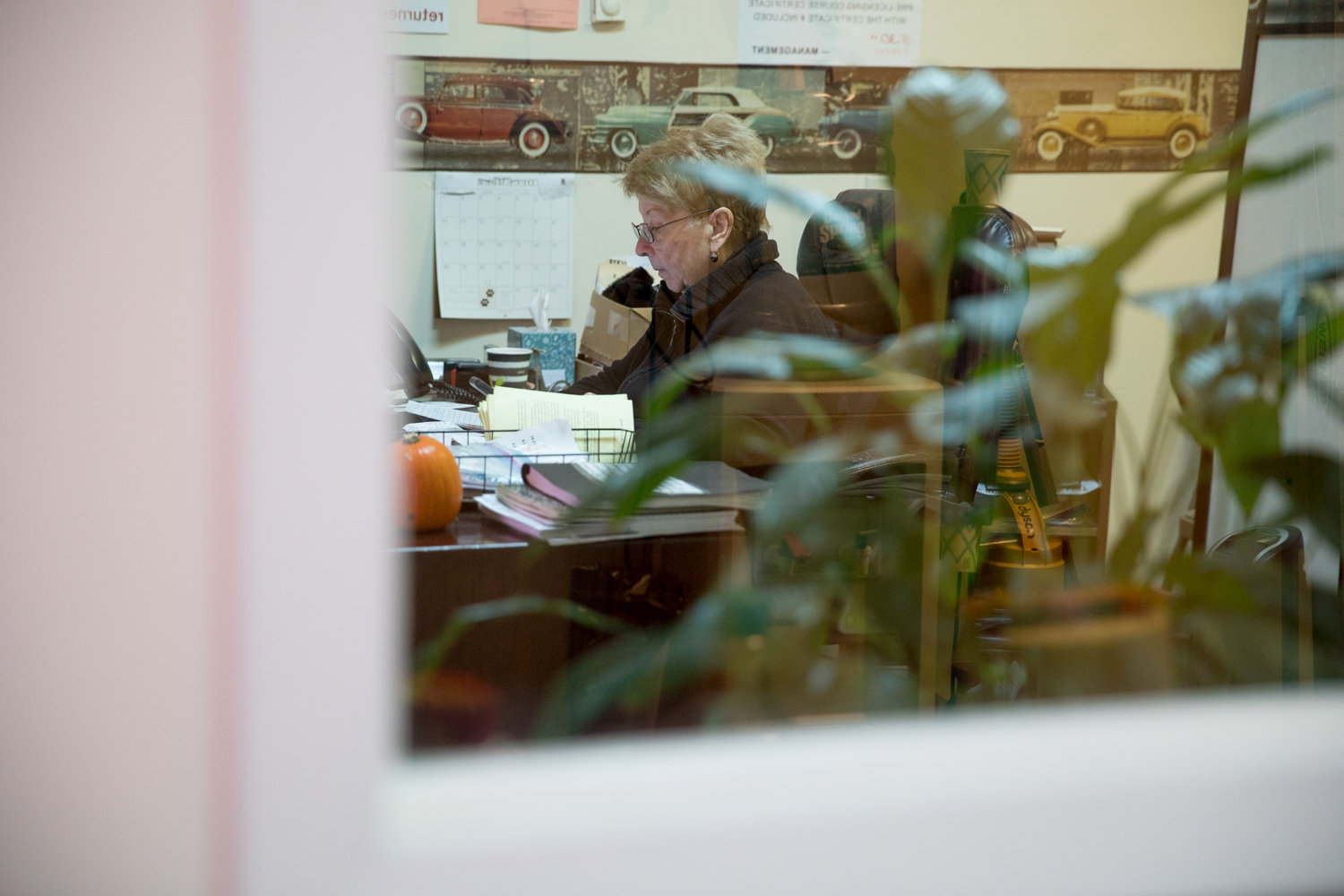 When it comes to the state’s ‘green light’ law, Gotham Driving School owner Irene Goldstein is only interested in teaching people how to drive. Originally from Venezuela, Goldstein understands how the promise of a better life pulls people to the United States. But when someone walks through the door at her school, the focus is not on public policy, but instead on driving.
JULIUS CONSTANTINE MOTAL 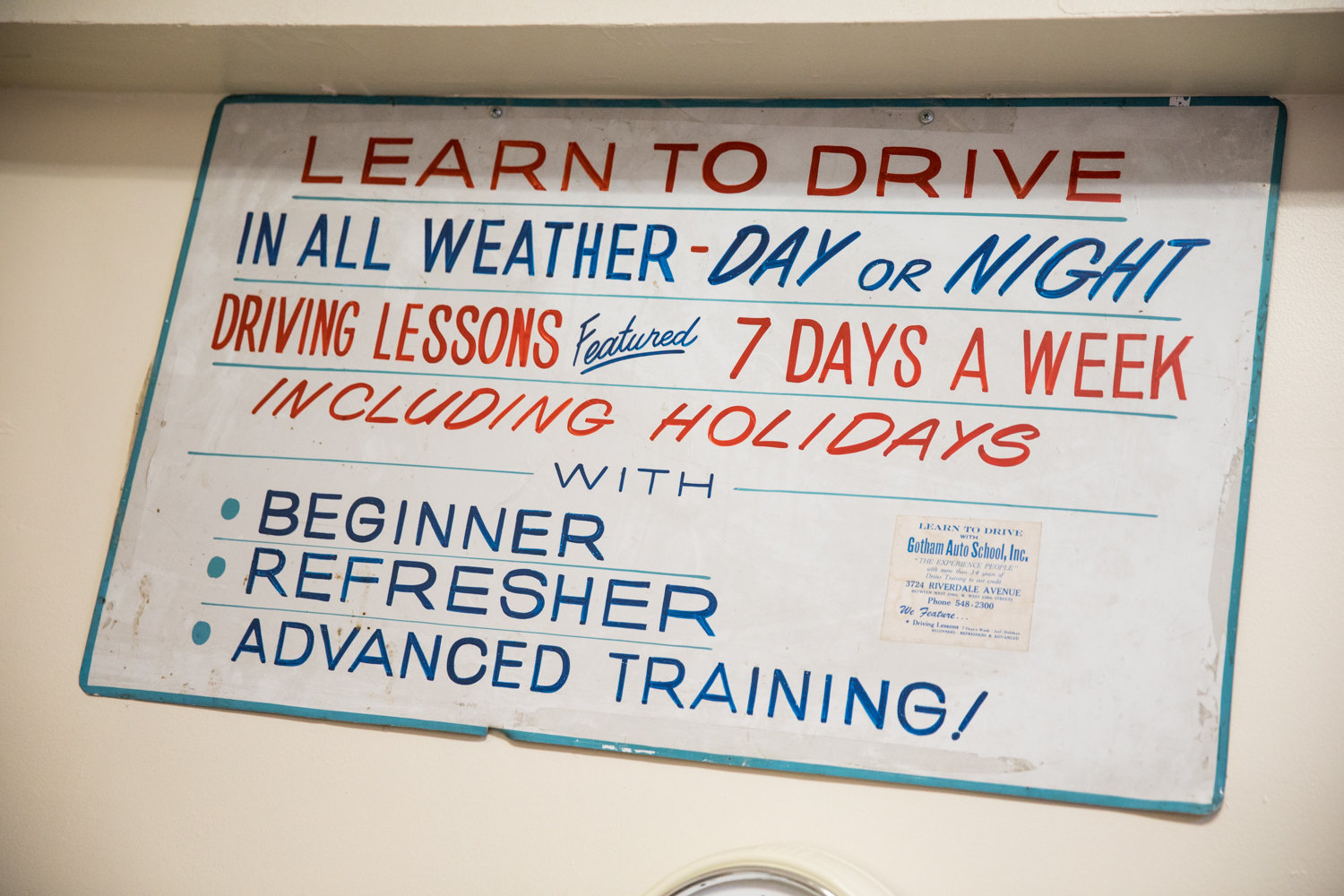 An old fashioned sign adorns a wall inside Gotham Driving School on Mosholu Avenue. Irene Goldstein, the school’s owner, isn’t concerned with the state’s new ‘green light’ law that grants undocumented immigrants the ability to get driver’s licenses. Her interest is in helping people learn how to drive, regardless of their background.
JULIUS CONSTANTINE MOTAL 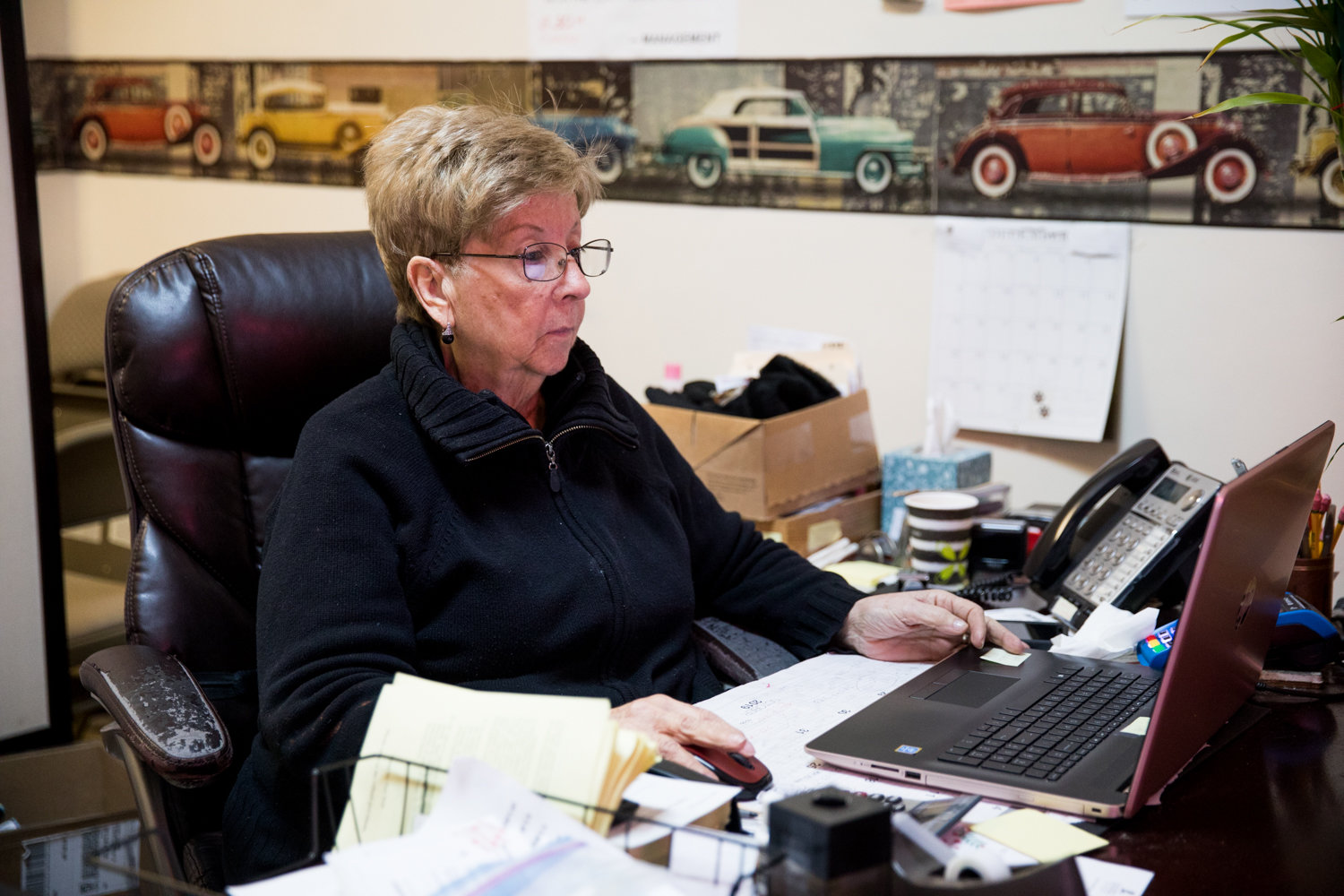 Irene Goldstein works on her computer inside Gotham Driving School, which she owns. Originally from Venezuela, Goldstein understands how the promise of a better life pulls people to the United States, but when someone walks through the door at her school, her focus is simply on getting them ready for the road.
JULIUS CONSTANTINE MOTAL 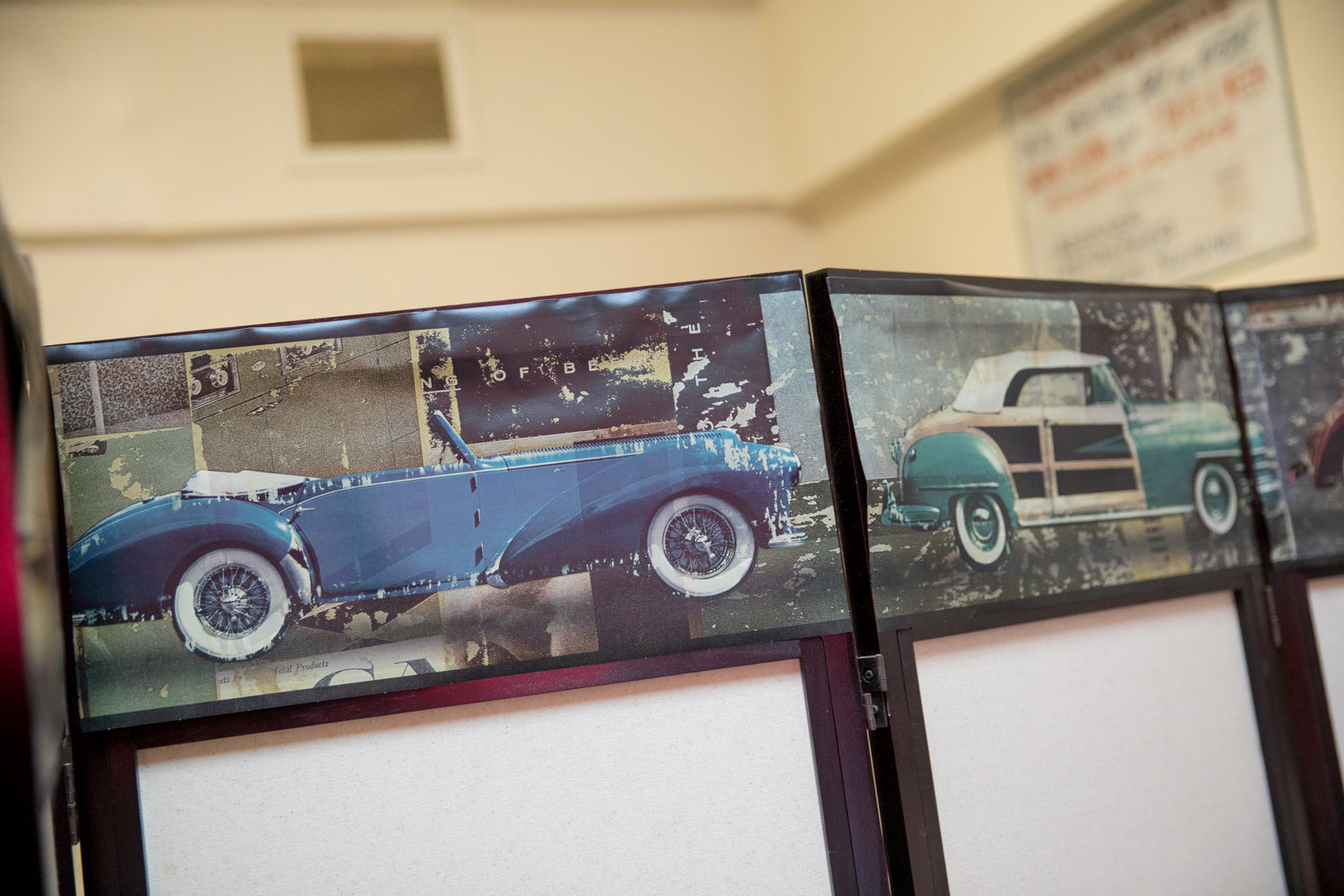 Pictures of vintage cars adorn a divider inside Gotham Driving School on Mosholu Avenue. Irene Goldstein, the school’s owner, isn’t concerned with the state’s new ‘green light’ law that grants undocumented immigrants the ability to get driver’s licenses. Her interest instead is in helping people learn how to drive, regardless of their background.
JULIUS CONSTANTINE MOTAL
Previous Next
By KIRSTYN BRENDLEN

Dec. 16 was a big day for undocumented immigrants living in New York — many were able to apply for a driver’s license for the first time.

The so-called “green light” law, which squeezed through the state legislature in June and was signed by Gov. Andrew Cuomo almost immediately, expanded the list of documents that can be presented to the state’s Department of Motor Vehicles offices that could lead to a driver’s license, despite immigration status.

Assemblyman Jeff Dinowitz, who co-sponsored the bill in the lower chamber, said the idea of a “green light” bill had circulated in the Assembly for years. However, it wasn’t until the election of Donald Trump in 2016 that lawmakers started taking such a measure more seriously.

“It really seemed to take on an elevated sense of urgency after the current president took office and began implementing xenophobic and discriminatory policies against immigrants in 2017,” Dinowitz said. “Locally, I think one of the first groups to raise this with me was Bend the Arc in Riverdale around early 2018.”

Trump rode into office on a platform that included drastic changes to how immigration is enforced, preventing fewer people from crossing the border into the United States and pushing deportations even harder than his predecessor.

The “green light” law, at its core, is about road safety, Dinowitz said. Although getting a legal driver’s license was impossible for undocumented immigrants, driving could still be necessary — especially in places outside New York City where public transit may be difficult to use.

Prospective drivers looking for a license could typically bring a number of different documents that helped identify them — few of which are available to undocumented immigrants. Under the new law, anyone applying for a driver’s license can use any of the previously accepted documents, or a foreign passport or driver’s license, a consular identification document, permanent resident card, or employment verification card, among other things, to prove their identity.

“People throughout New York State are already driving their kids to school, going to work, making deliveries, whatever else, with or without a license,” Dinowitz said. “Now, all New Yorkers can apply for a driver’s license, take the road test, obtain insurance, and improve accountability on our roads.”

State Sen. Alessandra Biaggi co-sponsored the senate version of the bill, which overcame a number of obstacles to get passed.

“For my constituents living in transit deserts in the Bronx and Westchester, legally operating a car is a necessity, not a luxury,” Biaggi said. But it’s also a chance to generate more revenue for the state — potentially $57 million each year — including $12.4 million for New York City through the purchase of driver’s licenses, vehicles, registration fees and gas taxes.”

A driver’s license does more than just let people get behind the wheel of a car. It also helps build a stronger bond for the people this country adopts, according to Carol Foresta. She’s a co-chair on immigration for Northwest Bronx Indivisible who pushed for the “green light” law’s passage.

“I’m a first generation immigrant, my parents came from Russian Poland to escape the Holocaust,” Foresta said. “And they did escape. However, they lost most of their family in the Holocaust. I suppose that makes me feel like I got lucky. I’m here.”

Foresta grew up in a community of immigrants in the Lower East Side.

“It was a wonderful community because it was so diverse,” she said. “What I see happening in our country and in our city, even, is all this racial tension and division.”

Foresta didn’t understand why people should not be allowed to “jump through the hoops” to take their driving tests and get a proper driving education before taking to the city streets in their vehicles.

“The bottom line is that if people are busted for a broken taillight, for example, or are pulled over for not using the correct turn signal, or whatever small infraction they commit, and they don’t have their license, that could lead to them being deported,” she said. “And very serious charges could be filed against them for a simple infraction.”

Foresta talked about a friend of hers who was married to an immigrant who had been unable to get his license.

“She was terrified, every day, that he was driving to work without a license, and he could in fact be arrested and deported,” Foresta said. “Even though he pays taxes on his work, and is otherwise a really excellent citizen and someone you want as your neighbor and your friend.”

In addition, she said, business is business. “They’re using my business, why should I complain?”

Goldstein comes from a family of immigrants who moved to the United States after her father visited and fell in love with the country.

“Why not give them a hand while they’re getting their papers together?” she asked.

Dinowitz admits there’s still some serious opposition to a bill like this, especially since New York is just one of 14 states to even enact such legislation. Some opponents have said the law would open the door for federal services, or even allow undocumented residents to register to vote — both of which the bill explicitly prevents.

But in the end, such a law makes sense to him.

“I think that improving road safety by making sure that everyone can get a license and insurance definitively outweighs what basically amounts to penalizing people based on how they arrived in our communities,” the Assemblyman said.

While privacy has been a concern for advocates and politicians alike — including Gov. Cuomo — Dinowitz says that the bill has specific provisions that will prevent the personal information of people applying for licenses from being distributed to other government agencies, including U.S. Immigration and Customs Enforcement.

“In the wake of continuous federal attacks against the immigrant community, New York remains a pillar of justice by enacting legislation that protects immigrant residents and keeps New York families together,” Biaggi said. “The added safety and economic benefit to the state makes it common sense.”