Greenbelt stays intact, but getting around still a problem 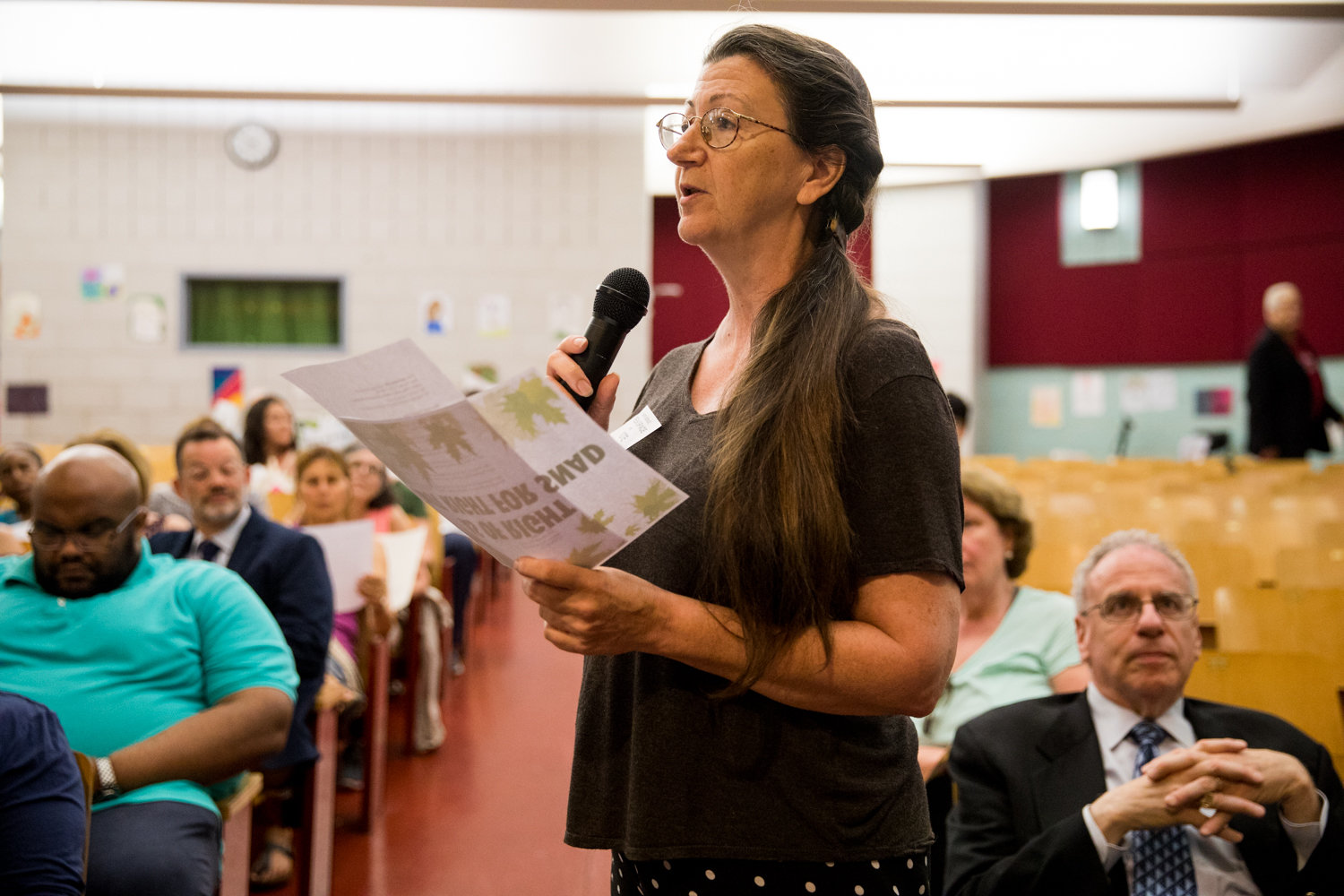 Councilman Andrew Cohen, center, listens as Jodie Colon reads a letter urging him to change his position on.proposed changes to the Special Natural Area District during the June 27 Community Board 8 meeting. The board voted to overwhelmingly reject the process that would have instituted the greenbelt changes after learning Staten Island was removed from consideration.
JULIUS CONSTANTINE MOTAL / File

Summertime created some of the biggest controversies our community had seen in a while, especially when it comes to protecting the greenbelt that helps define parts of the community we live and work in.

But there also was a push to make mass transit faster — more often than not, earning the ire of those who ride, and even those who don’t.

Revenge of the SNRD

One of the most defining features of Riverdale and Fieldston remains much like it was decades ago thanks to laws establishing the Special Natural Area District.

It’s here that, for the past 40-plus years, the green aspects of these neighborhoods have been preserved — from trees, to rock outcroppings, to even land slopes.

But the city planning department was ready to make big changes to SNAD, from Staten Island to the Bronx — changes that seemed few, if anyone, were supporting.

What made things worse was a poor rollout of the plan by city planning, including a last-minute removal of Staten Island from the proposal, leaving Community Board 8 with a bit of a 216-page mess to try to approve in late June.

“We received no notice of them dropping the Staten Island pieces,” CB8 chair Rosemary Ginty said of city planning. “The planning commission has 13 members. They had to advertise that meeting. There had to be a quorum. And they voted to certify the text. And this is the text.”

The complaints about the process were later echoed by Bronx borough president Ruben Diaz Jr., but more or less shrugged off by the City Planning Commission, which overwhelmingly approved what would become the Special Natural Resources District, with some minor changes, in an attempt to make up for taking away some of CB8’s oversight in the process.

In the end, however, it would be Councilman Andrew Cohen playing spoiler, letting city planning know SNRD no longer had his support, effectively killing the proposal.

Providing a lift at subway stations

It was a year where the Metropolitan Transportation Authority once again took center stage. And, as always, it wasn’t in a good way.

But that didn’t stop New York City Transit Authority president Andy Byford from making a stop in July, sharing what he hopes is a bright future for mass transit in New York City.

What the MTA will remain laser-focused on, however, is providing better accessibility for train stations — something his agency later announced plans for.

“Within five years, we can get you no more than two stops from an accessible station anywhere on our network,” Byford said. “We can’t be proud of our transit system when a whole swath (are) excluded from it. We’ve got to bite the bullet and make the whole system accessible.”

While subways and buses might have what they need together, it seemed the MTA’s Metro-North division was a little more discombobulated.

Buried inside a 500-page transit budget was a proposal to end the Metro-North’s management of the Hudson Rail Link, the buses that help take people in the neighborhood to Metro-North stops in places like Riverdale and Spuyten Duyvil.

The proposal intended to privatize the service, and if no company would take it over, to end it. Doing so would save the MTA $3 million.

Metro-North officials denied that was the case, however, later telling The Riverdale Press the proposal was included in error.

It was a hot summer, and while that might mean beaches and tans to many, for some, it spelled tragedy.

Juan Rodriguez parked his car near the James J. Peters VA Medical Center one morning, spent all day at work, and returned to make a horrific discovery: His twin infants, Luna and Phoenix, were still in the back.

The children died, and the public lashed out at the father. But many came to his defense, including Kids and Cars vice president Sue Auriemma, who warned that such a thing could happen to anyone.

Councilman Fernando Cabrera, who represents the neighborhood where the VA center sits, did his part by calling for better safety measures in cars that can help alert overworked and sleep-deprived parents that they have kids in the car.

Political maneuvering inside the Bronx

The city’s longest-running city council race — the one to replace Andrew Cohen (in 2021) — looked poised to finally get an early end. But in August, the Bronx Democratic County Committee decided to award open judge seat nominations to everyone but Cohen.

That means the already year-long race involving Eric Dinowitz, Dan Padernacht and Dionel Then would continue.

“I’m not crazy about the dynamic of having multiple candidates in full gear when I still have more than two years left in office,” Cohen said. “That does not seem to be the phenomena, at least that I can tell, in other council seats.”

The BDCC, however, had some of its own issues to deal with, including some significant internal efforts to change how accessible the committee was to its members. It was a battle that had been raging for months, but one where parliamentary procedure (and manipulations) were the weapons of choice.

It even had some wondering if there might be another “Rainbow Revolution,” like the one led by Assemblyman Jeffrey Dinowitz not so many years ago. Yet Dinowitz himself said that while what the committee does is not perfect, it’s also not corrupt.

There has been a bit of debate over what might be buried deep under Van Cortlandt Park. But thanks to a little bit of technology, some answers may have been found.

A team of soil scientists from the U.S. Department of Agriculture used ground-penetrating radar to scan four different areas of Vannie. What they found were telltale signs of a cemetery — long rumored to be he forgotten resting place of people enslaved by the area’s colonial settlers like the Van Cortlandt family.

City officials, however, were not surprised.

“The City of New York has many buildings and parks that stand on former burial grounds,” parks department spokesman Dan Kastanis said. “To our knowledge, more than 50 parks encompass former burial plots, including some of our most notable parks like Washington Square Park, Union Square and Bryant Park.”

Buses get all the ‘attention they need’

Broadway has been getting some interesting additions over the past couple years that have little to do with cars — primarily the bicycle lanes added along Van Cortlandt Park. But business owners on the Marble Hill stretch of the road were not forgotten by the city’s transportation department after it unveiled plans to convert one of Broadway’s southbound lanes into one dedicated to buses.

The goal is to speed up buses a bit — especially along a stretch where buses like the Bx7 and Bx9 are notoriously operating at about the same pace as walking. But the change didn’t meet a lot of support from those who would literally be just feet from it on the other side of the curb.

“They have to understand that this is the community, it’s got to be community based,” said Orlando Kross, leader of the Marble Hill Merchants Association, about the MTA. “Everyone comes and shops. All these businesses depend on double-parking. There’s just not enough parking spaces.”

But those who champion mass transit felt the bus lane was a long time coming for this neighborhood.

“They’re looking at the city comprehensively — it’s a complement to MTA’s plan,” said Stephanie Burgos-Veras, a senior organizer at the Riders Alliance. “It’s a citywide transformation to make buses better. Over the last decade they’ve been getting slower and slower. Finally buses are getting the attention they need.”