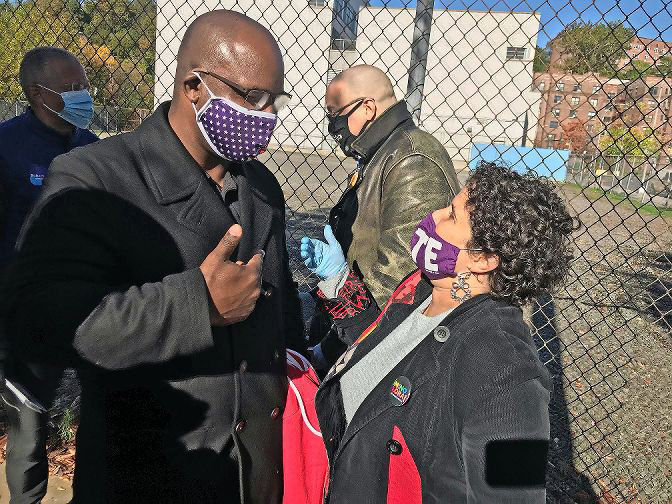 Mino Lora chats with then congressional candidate Jamaal Bowman outside of IN-Tech Academy during early voting last year. Lora, who wants to replace Andrew Cohen on the city council, has joined forces with fellow candidate Jessica Haller in hopes they can win on a ranked-choice ballot March 23.
MICHAEL HINMAN/ File
Dinowitz leaves classroom

Eric Dinowitz has talked a lot about his job as a public school teacher, and balancing that life with his political ambitions. But at least for the rest of this special election race to fill Andrew Cohen’s final year on the city council, Dinowitz won’t have to worry about stepping into a virtual classroom.

Dinowitz has stepped down from his teaching role at the Celia Cruz Bronx High School of Music on the Walton campus. He revealed his move to The Forward, later confirming it with The Riverdale Press.

“With less than six weeks left until early voting, I have transitioned to campaigning full-time,” Dinowitz said, in a statement. “I am proud of my almost 14 years of service as a special education teacher in our public schools, and look forward to continuing to advocate for my students and our community’s future in the city council.”

Dinowitz refused to answer follow-up questions, including why he made the decision to leave his class mid-semester, and if he would still be a member of the United Federation of Teachers, which endorsed his candidacy early on. Alison Gendar, a spokeswoman for UFT, says Dinowitz’s decision to step down won’t affect her organization’s support.

While she wouldn’t comment on what exactly Dinowitz’s current status is with the union, she did confirm that anyone who leaves a teaching position would also have to leave the union.

Ranked-choice voting has been promoted as a fresh coat of paint in New York City’s election process — but it’s paint that has yet to dry.

Still, that’s opening doors for new ways to campaign. And at least two candidates in the upcoming March 23 special election race to replace Andrew Cohen on the city council are poised to take advantage.

Jessica Haller and Mino Lora — the special election’s only two women candidates — announced Sunday they are teaming up in a sort-of unity ticket. Their hope is that voters will make them their first and second choice. And if they do, it could all but ensure one of them would come out as the winner.

“Miss Lora and I are working on a ranked-choice voting strategy backed by multiple organizations that have already come out and endorsed this,” Haller told moderator Sue Ellen Dodell at Sunday’s Northwest Bronx Indivisible candidate forum.

Haller, an environmental activist and entrepreneur in Fieldston, didn’t share much else about that strategy. And neither did Lora, a Spuyten Duyvil non-profit leader.

“I am excited about ranked-choice,” Lora said. “I look forward to building partnerships and engaging with other women in the race.”

Creating partnerships among candidates has been one potential political strategy campaigns have considered to try and make the best of the new voting system. It’s designed for races exactly like this special election, where there are six candidates on the ballot, and chances are none will win an outright majority.

In some races, that would mean a costly run-off. For special election races like this, it results in someone being elected that might have the backing of a smaller part of the electorate.

Through this new system, voters rank their top five choices, with their No. 1 vote being the first that’s counted. If none of the candidates achieve at least 50 percent of the vote, the ballots are recounted, eliminating the worst-performing candidate, and redistributing their votes to reflect their second choice. That process continues until one candidate emerges with 50 percent.

In this special election, candidates are all fighting to be that No. 1 pick. But if they aren’t, they are fighting for No. 2. That way, if someone’s No. 1 was eliminated in a first round of recounts, that No. 2 will now be that particular voter’s primary choice.

Yet, finding who to partner with isn’t exactly easy. And for some, it could be outright impossible. It could be one reason why both Eric Dinowitz and Dan Padernacht both told the candidates forum they were going it alone.

“I’m running because I believe that I have the most relevant experience and can be the best choice, making sure that our community has a voice,” Dinowitz said. “So right now, I have no plans to partner with anyone.”

Padernacht, however, says he’s at least leaving the option on the table.

“I have not partnered with anyone to date,” he said. “I would partner with somebody in the future if we did come to terms with what that means.”

Sunday’s forum also allowed candidates to do something they’re not promoted to do often: Ask each other questions. Dinowitz directed his inquiry at Carlton Berkley, the only special election candidate who lives on the east side of the Jerome Park Reservoir.

Citing something he said during The Riverdale Press/BronxNet candidate debate the week before, the former teacher wanted to know what Berkley meant when he said both Riverdale and Woodlawn should serve as models for the rest of the council district.

“Living over here in Wakefield, I travel through the district,” Berkley said. “And when I pass those neighborhoods, I’m proud of those neighborhoods. The streets are very clean. I really don’t see any crime around there. Very seldom do I see the police.”

That’s a bit of a contrast to other parts of the district, however, Berkley added. But it’s not something to be ashamed of.

Haller directed her question at Dinowitz, pulling out several newsletters published by his father, Assemblyman Jeffrey Dinowitz, that features pictures of the younger Dinowitz leading up to and during his city council run.

“Since 2017, about half of these newsletters contain your picture,” Haller said. “It costs taxpayers $100,000. It’s illegal to use taxpayer funds for political purposes. Would you ask Assemblyman Dinowitz’s office as well as the rest of the political machine to stop using taxpayer dollars for these purposes?”

The younger Dinowitz, however, countered that he’s not the only candidate in the race to appear in his father’s taxpayer-funded newsletters. He might appear more often in them, he said, because “I am the one with the most experience attending community events.”

This particular special election race is getting a lot of broader attention in the city. After debates and forums hosted by The Press, a Brust Park advocacy group and Northwest Bronx Indivisible, the candidates have been invited to more gatherings in the coming weeks, including a Valentine’s Day gathering hosted by NYCD-16 Indivisible and City Limits, and a town hall Feb. 17 hosted by SAR High School’s Election, Politics and Governance Club.

The winner of this seat will fill out Cohen’s final year on the council. The winner will have to run again in the June primary if they want to continue on in the role past Dec. 31.