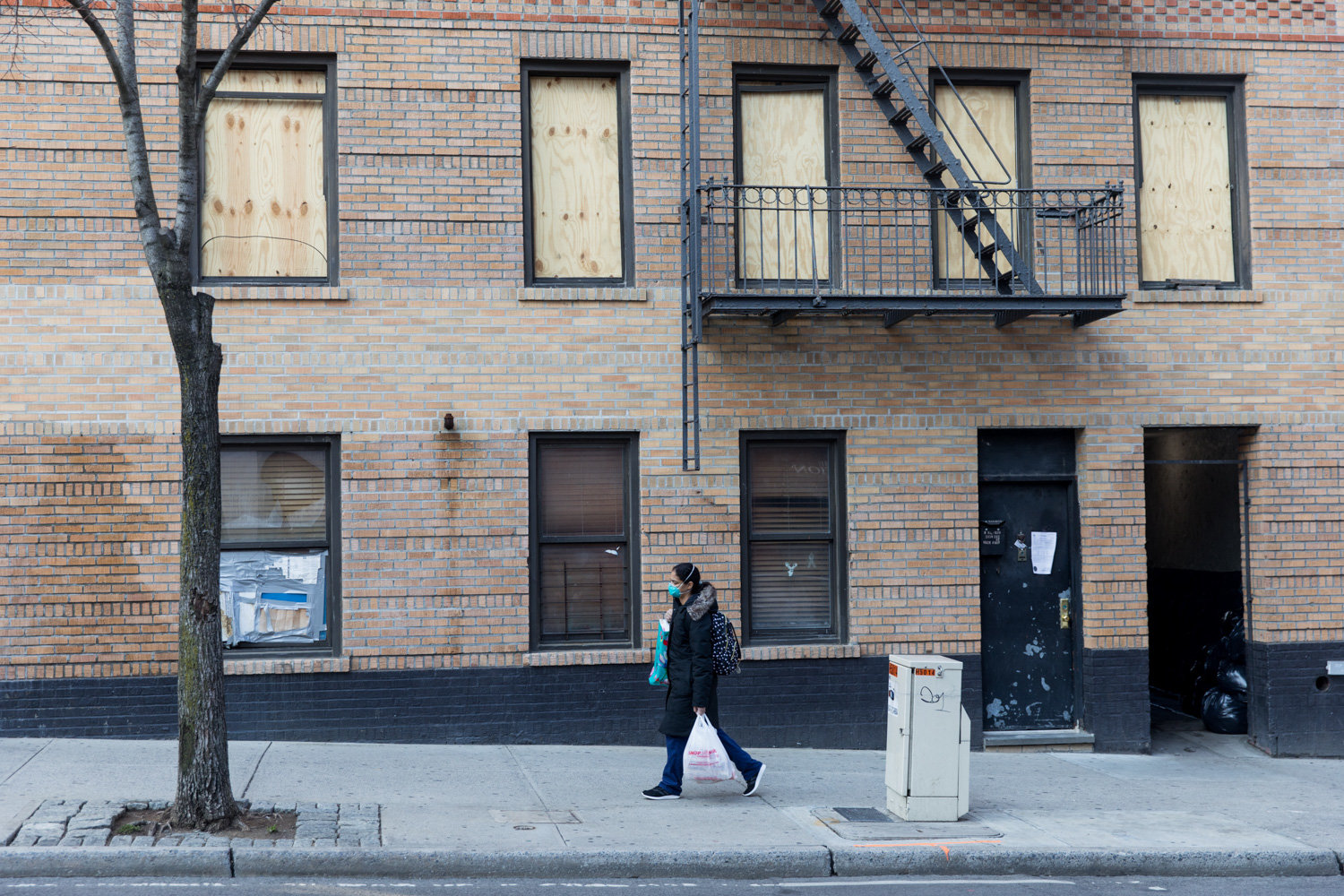 Windows are boarded up at 215 W. 242nd St., where a one-alarm fire injured 11 people March 6. Many were saved thanks to the efforts of Josh Pizarro, who knocked on as many doors as he could to warn his neighbors of the blaze.
JULIUS CONSTANTINE MOTAL 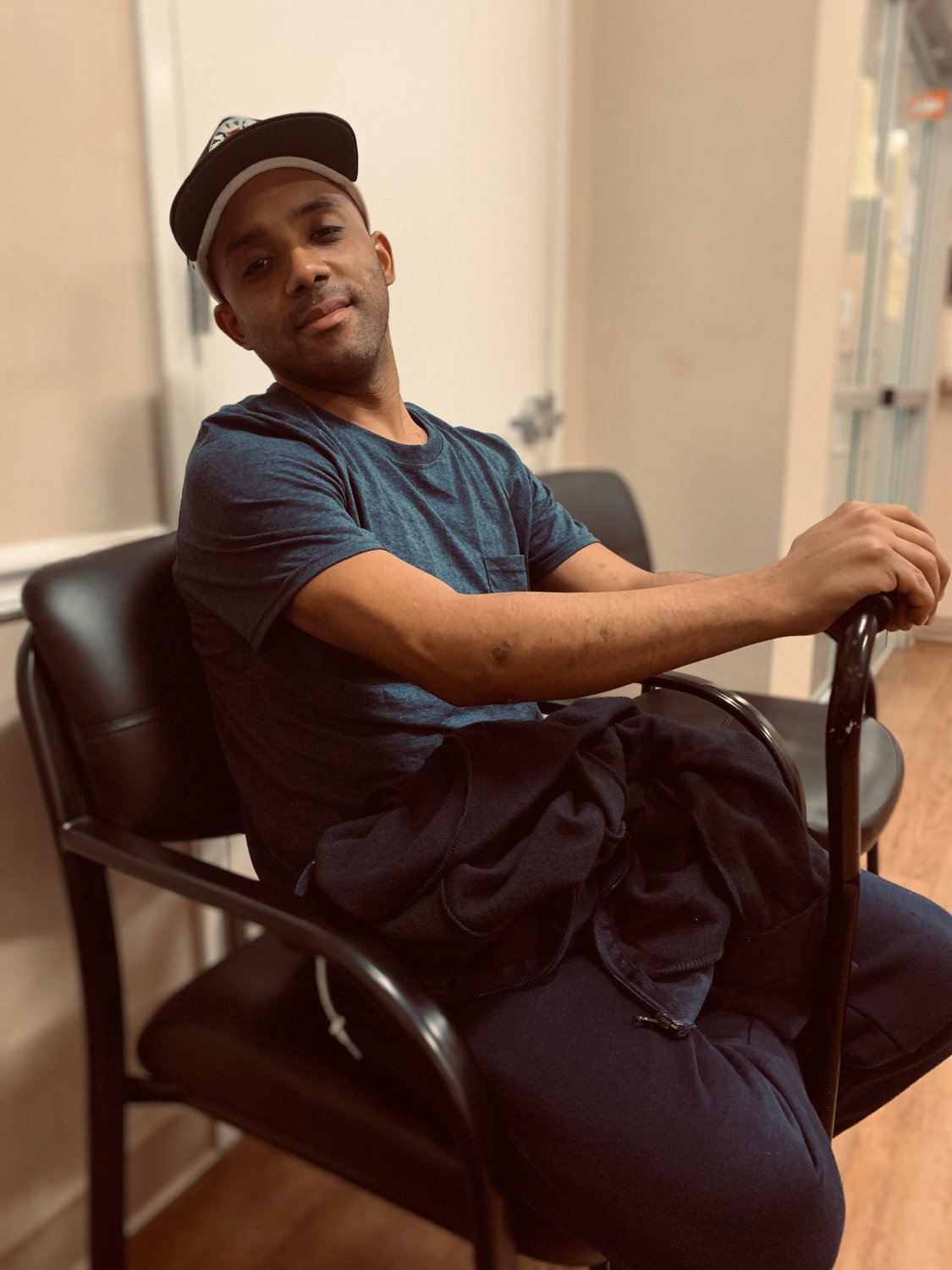 Josh Pizarro took it upon himself to warn as many neighbors as he could when a fire broke on the first floor of 215 W. 242nd St., earlier this month. The one-alarm blaze injured 11, but it could have been much worse.
Courtesy of Josh Pizarro 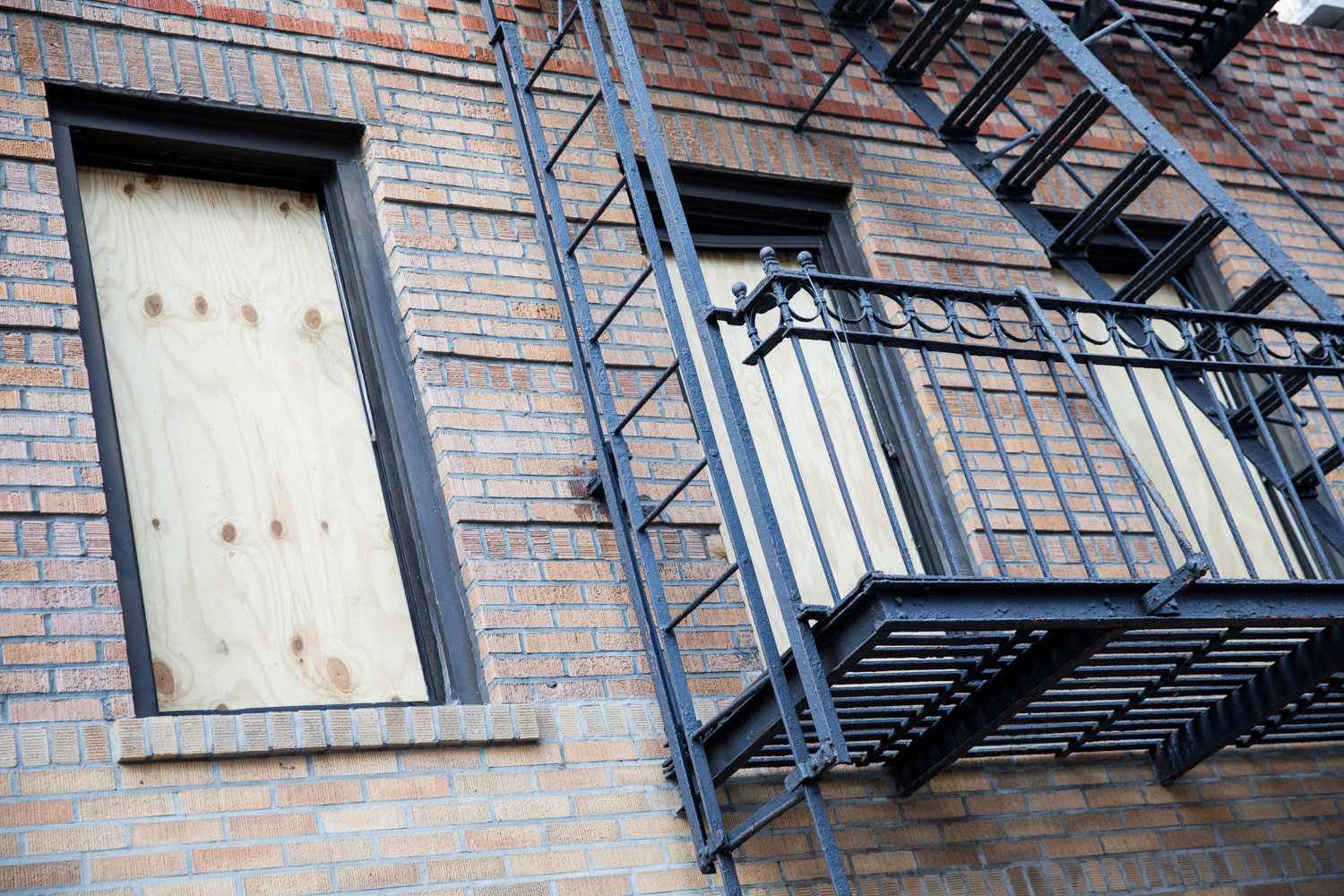 A one-alarm fire on March 6 injured 11 people at 215 W. 242nd St., but it could have been much worse had Josh Pizarro not knocked on as many doors as he could have before he himself needed to be taken to the hospital.
JULIUS CONSTANTINE MOTAL 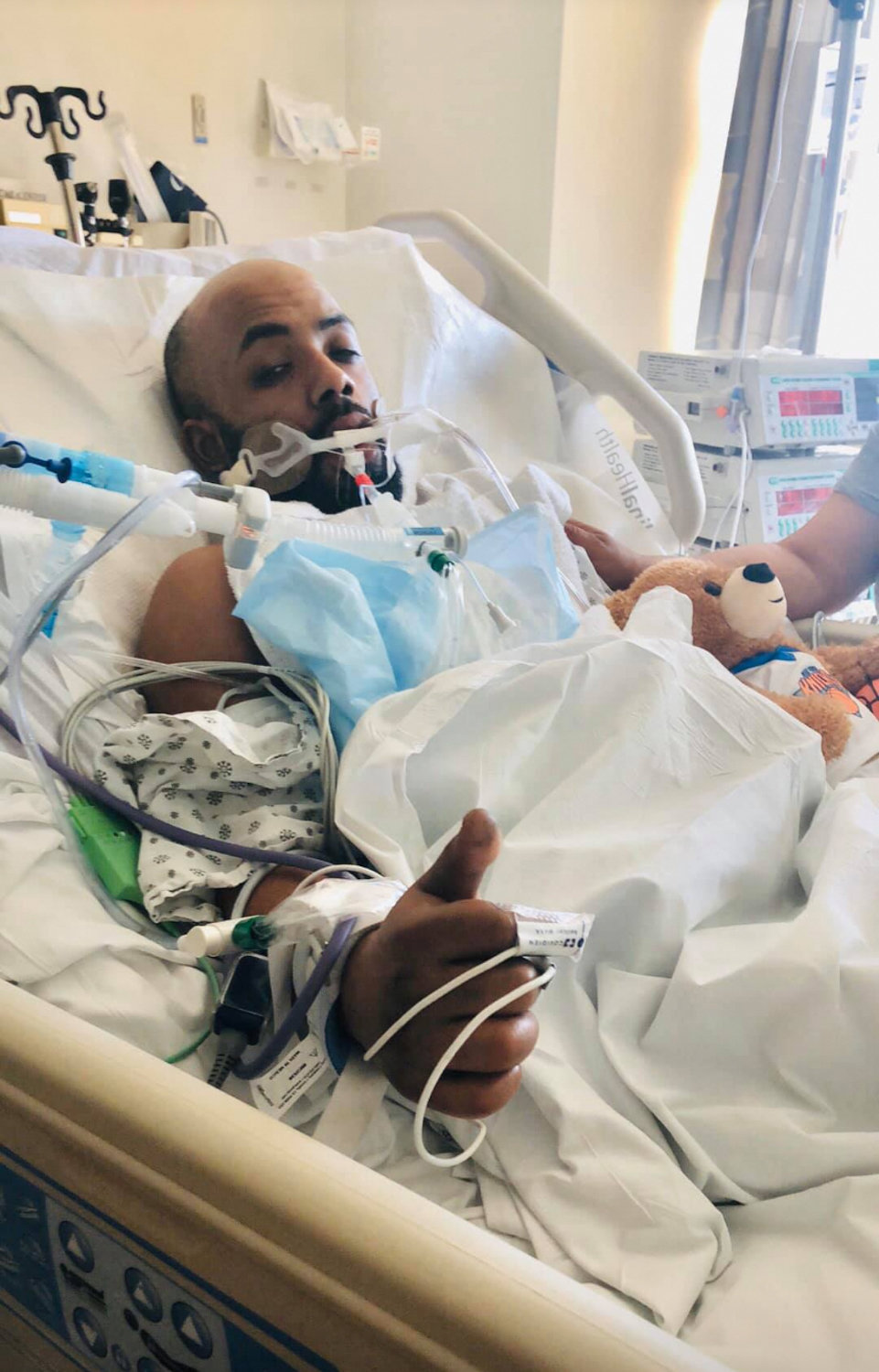 Josh Pizarro was in critical condition when he was brought to Jacobi Medical Center on March 6. He’d risked his life to warn neighbors about the fire that broke out at 215 W. 242nd St.
Courtesy of Josh Pizarro
Previous Next
Support Local Journalism

Weeks before life turned upside-down for everyone, life changed dramatically for the residents of 215 W. 242nd St.

A one-alarm fire broke out on the morning of March 6, bringing everyone out of their apartments — some out of a home entirely.

Even amid the turmoil and confusion of the fire, those who had gathered on the street in front of the building had one person to thank: Josh.

Josh Pizarro, that is. The 30-year-old became a resident hero for these neighbors after running back into the building to ensure everyone in harm’s way of the flames and mostly smoke were able to get out.

“He started going up the building instead of going down,” said Ammar Ammari, a building resident, told The Riverdale Press at the time. “When they took him out the building, he wasn’t breathing.”

Once Pizarro had escaped his first-floor apartment, he realized his neighbors didn’t know a fire had broken out below them, so he ran back into the building.

“I woke up and I stepped out of the apartment, and me and my neighbor from the first floor smelled smoke, and the door was getting real hot,” Pizarro recalled. “So basically, what happens is, he said he was going to call the police, and I said I was going to dial 911 to get the fire department.”

Emergency responders were on the scene within minutes, and Pizarro stepped outside. That’s when he realized the fire was going to be bad.

So Pizarro went back inside, banging on his neighbors’ doors.

“I’m going door to door, you know?” he said. “I hear everybody coming out of their apartment, going downstairs, I go to the next door.”

The building isn’t outfitted with smoke alarms, Pizarro said — at least in the hallways.

“If I didn’t wake up everybody,” he said, “nobody would have heard it.”

Investigators have deemed the fire an arson, according to the New York Police Department, although no arrests have been made as the investigation continues.

By the time Pizarro reached the fourth floor of the apartment building, the smoke was becoming too much, he said. He was struggling to breathe. By then, neighbors from the fifth floor had realized what was going on and had started to file down the stairs.

The lights went out, plunging the already smoky fourth floor into darkness. Pizarro wanted to make sure he hit every door on the floor, calling for the occupants behind each one to leave. That included his friend and neighbor Carlos, who later texted Pizarro his thanks.

“Man everyone is so thankful for you bro,” wrote Carlos, who didn’t give his last name. “You really didn’t have to do that.”

But for Pizarro, he did. Since moving into 215 W. 242nd, it has become his community, making friends and developing a support system for Pizarro and others.

“I’ve been living there five years, and I care about everybody,” Pizarro said. “Especially the guys on the second floor and the fourth floor are my best friends.”

By the time he made it that high the morning of the fire, Pizarro was crouched in the corner of the hallway, praying as he desperately tried to catch his breath.

“Suddenly, I got a boost of energy, and I turned around, dropped my phone, and started running,” he said. “I felt the step, and when I felt the step, my mind just lit up. And I said, ‘I’m throwing myself.’”

Pizarro tumbled down the stairs to the landing, and then threw himself down the next flight of stairs. When he reached the second flight, Pizarro found a firefighter, who pulled him out of the building.

Once he was out of the building and loaded into an ambulance, Pizarro said he started to feel like he was fading.

Pizarro spent just over a week at Jacobi Medical Center recovering from smoke inhalation and the physical injuries he received while he tried to get out of the building.

His apartment has been ruined, and friends and family started a online fundraising campaign to help him recover from the fire. A family friend offered to collect donations at her North Riverdale home — money, daily essentials, and anything related to the New York Knicks, she said in a recent social media post.

Pizarro is out of the hospital now, trying to orient himself while he stays at his sister’s Manhattan apartment. He’s been trying to take care of her children while they’ve been home from school during the COVID-19 outbreak.

“I’m trying to be calm, and take it easy,” he said. “Everyone’s been nervous because of the coronavirus.”

Most of his neighbors are out of the hospital, and he’s been able to talk to many of them on the phone since he was released.

There was one more silver lining, discovered while he was still in the hospital: Pizarro’s black-and-white cat, Frosty, was found alive in his apartment.

Police couldn’t find his cat in the apartment, but Pizarro’s neighbor wasn’t willing to give up. She set out a can of food and simply waited for the loved feline to emerge.

When Frosty finally did, it was from a little hole he had carved into the mattress — a hidey-hole so secret even New York’s finest couldn’t find him.

“Thank God they got my cat to my neighbor’s house,” Pizarro said. “Thank God my cat’s alive.”