A new era begins for the Edgehill Church, a true Spuyten Duyvil landmark 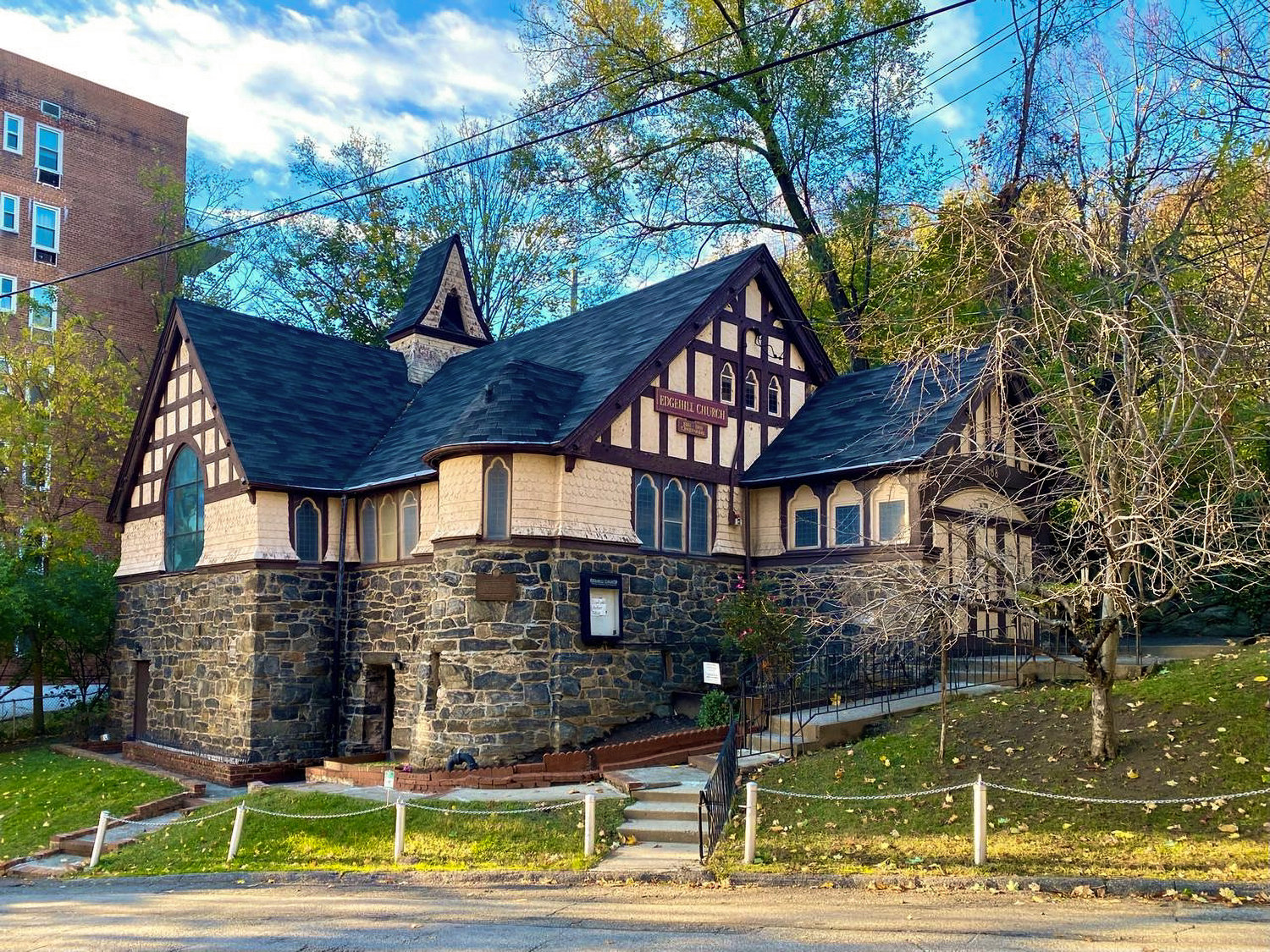 Architect Francis Kimball designed a Richardsonian stone base and Tudor gables for Edgehill Church, built in 1889 when Spuyten Duyvil was more sparsely populated than now. The beautiful eclectic structure blends into the hillside at 2570 Independence Ave. Four Tiffany stained-glass windows and a 1939 pipe organ built by William Laws of Beverly, Massachusetts, are among its treasures.
Courtesy of Brad Trebach 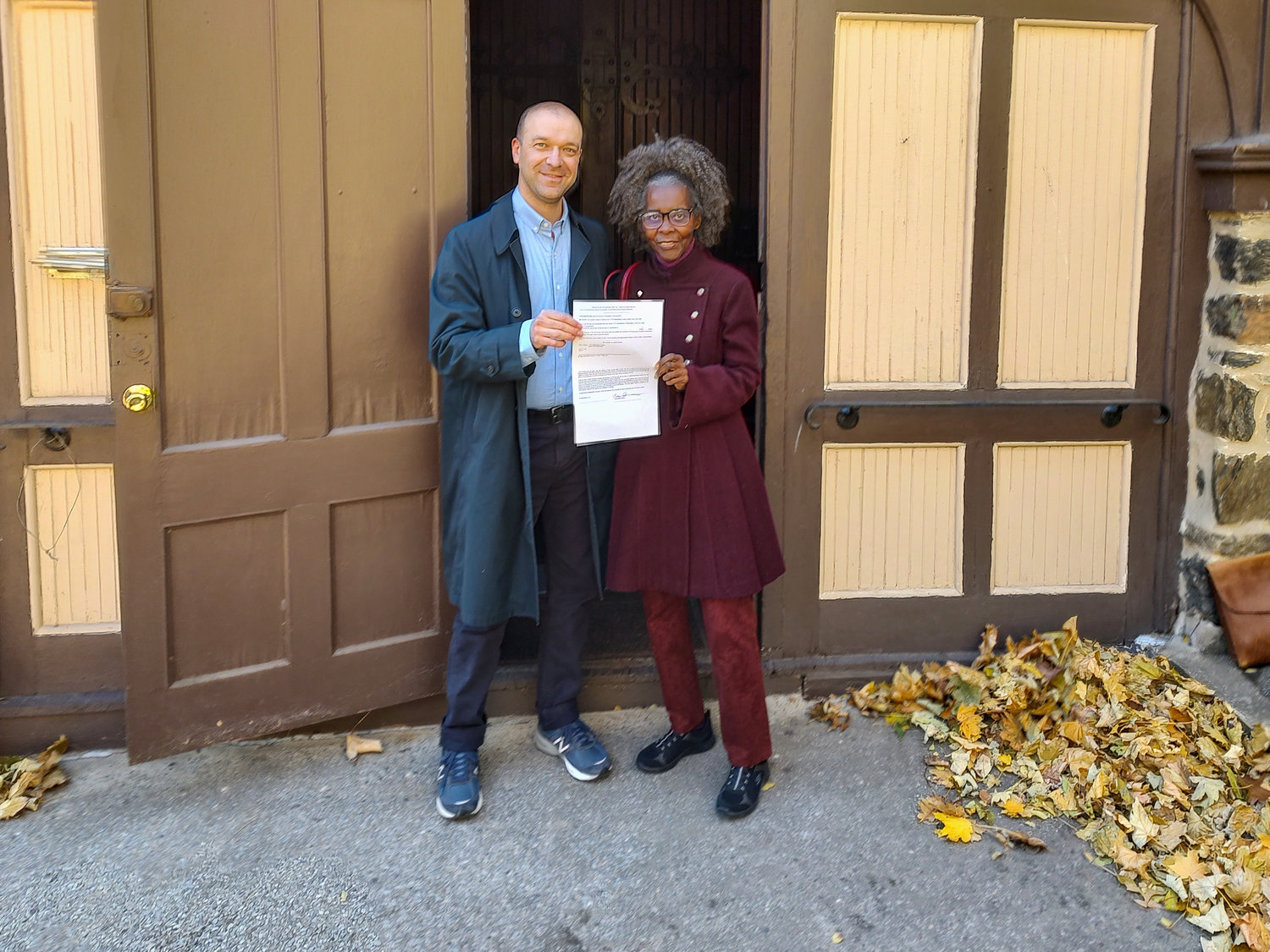 General committee chairperson Carolyn Abernathy hands Edgehill Church’s title to Kingsbridge Historical Society president Nick Dembowski last week. Dembowski isn’t the only president of the group to operate out of the church. Predecessor the Rev. William Tieck would preach from there in his later years.
Courtesy of Peter Ostrander
Previous Next
Support journalism

The two remaining members of Edgehill Church in Spuyten Duyvil handed the keys to their sanctuary over to the Kingsbridge Historical Society Dec. 2, sparing the landmark building from developers and launching a new chapter in its 133-year history.

The historical society will restore it and make it their new home in the Bronx.

New York Supreme Court Judge Wilma Guzman signed the church’s petition to dissolve in October, permitting the members to transfer the title and the church’s $1,500 bank account balance to the historical society, which will maintain tax-exempt status. The church’s only other asset was the property, which has a tax-assessed value of $333,000, according to city department of finance records.

At the date of its dissolution, the church most recent demonination was the United Church of Christ, which was formerly known as the Congregational Church. In the 19th century, it was a Presbyterian church.

“It takes your breath away to walk inside,” he told The Riverdale Press. “It definitely needs work, but it has good bones. KHS is not looking to develop the property or change it. Our mission is to preserve.”

The plan has quietly been in the works since 2018, when a water pipe broke and flooded the church’s basement. The modest funds available in Edgehill’s bank account precluded the possibility of fixing the havoc the leak wreaked, or turning the water back on.

The Johnson Ironworks billowed on the Hudson in 1889 when Edgehill Church was built into the slopes of Spuyten Duyvil. Its graceful asymmetry designed by architect Francis Kimball lends picturesque qualities and cleverly melds it into the terrain.

It was designated a landmark in New York City in 1980 and was added to the national register two years later. But the aging congregation was struggling to keep up with the leaks, cracks, and bursting copper pipes.

“It was clear to me that a change was needed to ensure that our beautiful church building continued to benefit the community going forward,” wrote general committee chairperson Carolyn Abernathy in her affidavit submitted in the Supreme Court petition.

By that time, she and longtime general committee member Thomas Bird were the only two church members left. The congregation had dwindled to 10 members in 2001, and then became too small to take any action under the church bylaws.

Real estate investors had been circling in Edgehill’s twilight days, Abernathy told The Press. “Offering all sorts of things. But that’s not what I wanted,” she said.

In 2019, she and Bird began in earnest to discuss the property transfer with the historical society.

The late Rev. William Tieck, who founded the Kingsbridge Historical Society in 1962, is the figure that yokes the two organizations together. Not long after retiring from St. Stephen’s Church in 1977, he stepped in to revive Sunday services at Edgehill Church, serving as minister during a vulnerable time.

“I know Rev. Tieck is smiling down,” Abernathy said. “I’m getting older, and I just wanted it to go to somebody that really can appreciate it. What better than a historical society?”

“At first we weren’t out to acquire a church, just a place to hold our meetings,” Dembowski said. But when it became clear that the church wasn’t in operation and needed help, he said “it just became clear to us.”

Attorney Dan Padernacht offered to represent the parties pro bono as they completed the court proceedings this year.

“A rather idiosyncratic thing,” Dembowski said. “He was amazing throughout the process.”

The Kingsbridge Historical Society will hold its regular meetings in the church and safely store its treasure trove of local artifacts, photos, maps, and documents. The plastic tubs have heretofore had a nomadic existence, said former president Peter Ostrander. They roved from St. Stephen’s Church to the attic of the Van Cortlandt Park Mansion to a closet at St. Gabriel’s, and finally an upper floor of St. Margaret of Cortona School once occupied by nuns.

Ostrander was giddy at the thought of finally putting the revolutionary cannons and sliding bar shot on display. They were recovered at Fort Independence, he said.

What is bar shot? He was quick to explain: “It’s very rare. It looks like half a cannon ball. They would spin like a baton. The ships were coming up the Hudson, and that bar shot starts swinging around the ropes and rips the rigging down – pretty effective. It’s probably unique to Americans.”

Edgehill Church is in dire need of repair and restoration. It has neither running water nor heat and the boiler may not be salvageable, Dembowski said. The Kingsbridge Historical Society has already secured a grant from the New York Landmarks Conservancy to reconnect the church’s water supply.

And in the three days since Dembowski announced the acquisition in an email to historical society members, more than $1,000 in donations came in. He said the Kingsbridge Historical Society will officially launch a fund drive soon and begin undertaking the restoration.

He’s planning to host an informal open house at the church in January, pending further details.

“I want people to understand the historical society welcomes all,” Dembowski said. The caveat is that “it’s unlikely the toilet will be working by then.”