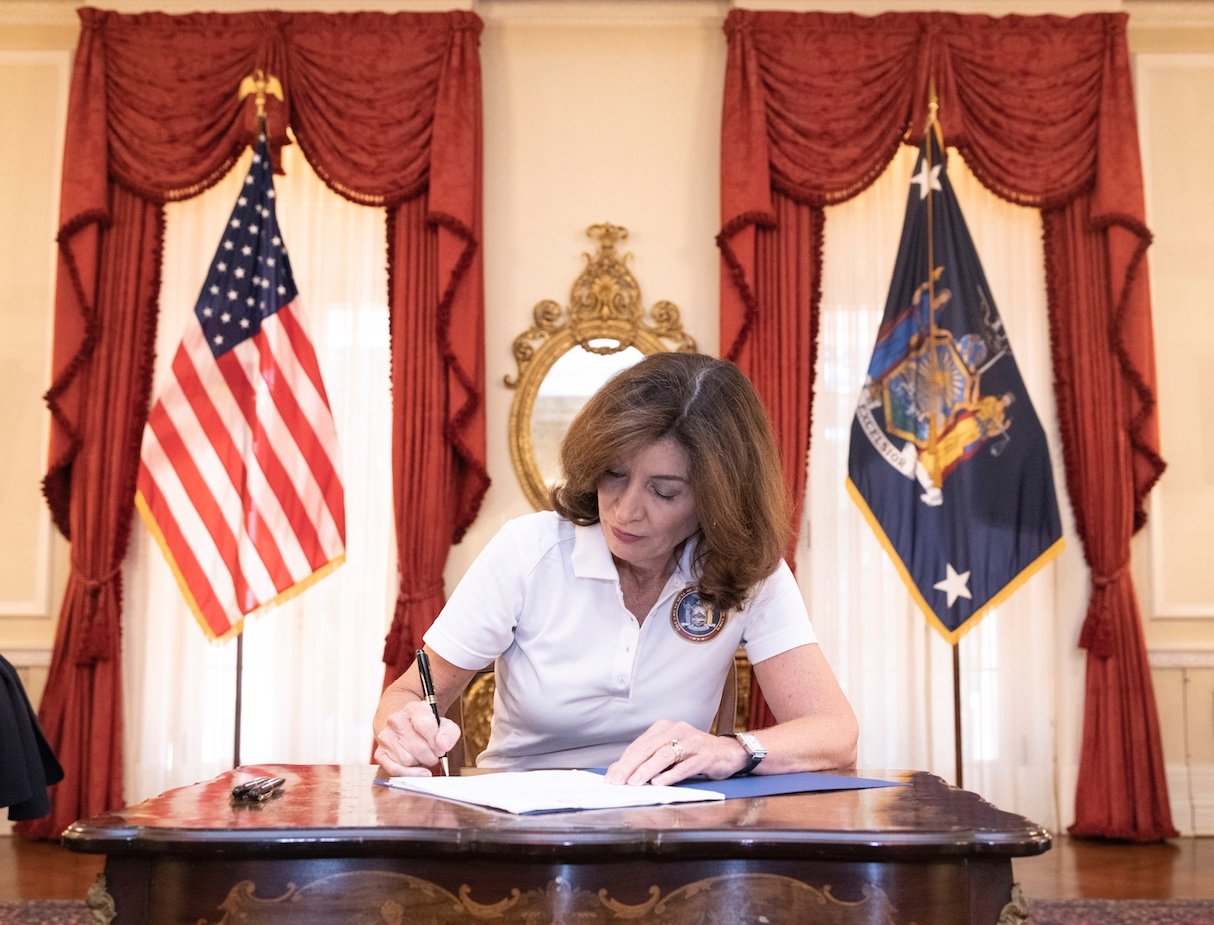 After calling the legislature back into a special session, Gov. Kathy Hochul signed into law a measure that would extend the coronavirus pandemic-era eviction moratorium through next January.
Courtesy of Gov. Kathy Hochul/Mike Groll
By JOSEPH DE LA CRUZ

With a simple stroke of the pen, Gov. Kathy Hochul extended New York's eviction moratorium on Thursday, extending the protections from the original Tenant Safe Harbor Act until at least Jan. 15.

The expansive law is intended to protect landlords and property owners with 10 or fewer residential units who filed hardship declarations with their mortgage lender, other foreclosing party, or a court to prevent a foreclosure. The law also includes protections for commercial tenants who face evictions as well, requiring small businesses with 100 or fewer employees experiencing financial difficulties to also file a hardship declaration — a document explaining the source of their financial issues — to prevent evictions.

"These steps will alleviate the crisis facing vulnerable New Yorkers who are suffering through no fault of their own," Hochul said, in a release.

The extension comes just days after the original date had expired, leaving a half-million renters who suffered financially throughout the coronavirus pandemic vulnerable to eviction.

Hochul also encourages those struggling to pay for rent to apply for money through the state, funded by the federal emergency rental assistance program, which can help offset rental arrears paid directly to landlords. The state has been criticized about the distribution of more than $2 billion in funds provided by the federal government, as just a small fraction of it has made its way to landlords.

The law was the first bill passed by the legislature Hochul called back into a special session on Wednesday. Assemblyman Jeffrey Dinowitz and state Sen. Brian Kavanagh authored the moratorium bill. Hochul also tasked lawmakers to explore allowing government agencies to continue meeting online instead of in-person while the pandemic continues on, while also further legalizing marijuana in the state.

The moratorium extension was necessary not just because former Gov. Andrew Cuomo's emergency powers expired, but also because the U.S. Supreme Court knocked out a federal moratorium enacted by the Centers for Disease Control and Prevention. Justices believed only Congress could authorize such a measure, and not unilateral enforcement from a single government agency.

Hochul called that ruling a "heartless decision," adding that New York is "not going to exacerbate what is already a crisis."

The moratorium doesn't ban all evictions, however. Tenants not paying rent who are unable to show financial hardship caused by the pandemic can still be removed from their homes, as well as anyone who landlords believe is creating safety or health hazards for other tenants, or who are intentionally damaging property.

"This law will help thousands of families keep a roof over their heads and doors open for small businesses as the state works to improve and streamline the (emergency rental assistance program), and we all work together on a recovery from this deadly pandemic," Dinowitz said, in a statement.

State Sen. Alessandra Biaggi, who authored a similar bill, said she was happy the legislature made quick work to extend the moratorium.

"Failing to extend the eviction moratorium while our state grapples with the continued surge of COVID-19 cases would have been the equivalent of handing hundreds of thousands of New Yorkers a death sentence," Biaggi said, in a statement. "Evictions trap families into a cycle of poverty nd trauma, and will only exacerbate our current public health crisis."

The new law also provides a $25 million fund to provide legal services to tenants facing eviction proceedings in areas where free legal counsel is not provided.

"We are not going to abandon our neighbors in need," Hochul said, "especially since the state of New York failed in its responsibility to get the money that was allocated to Congress out to the people in need earlier this summer."