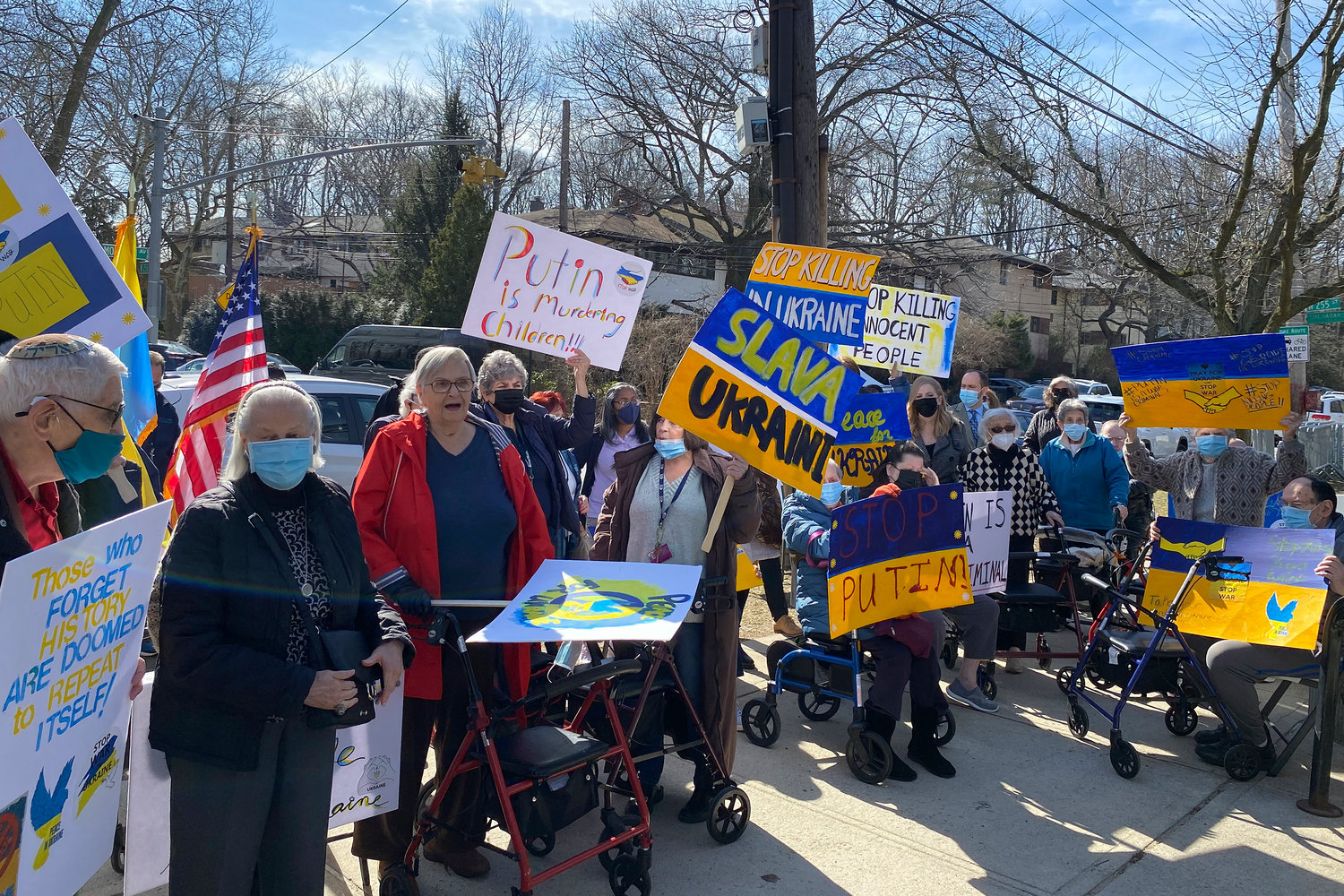 Residents from the Hebrew Home at Riverdale and it RiverWalk community hold up signs during a protest of the war in Ukraine in front of the Russian Mission compound on March 15.
GARY LARKIN 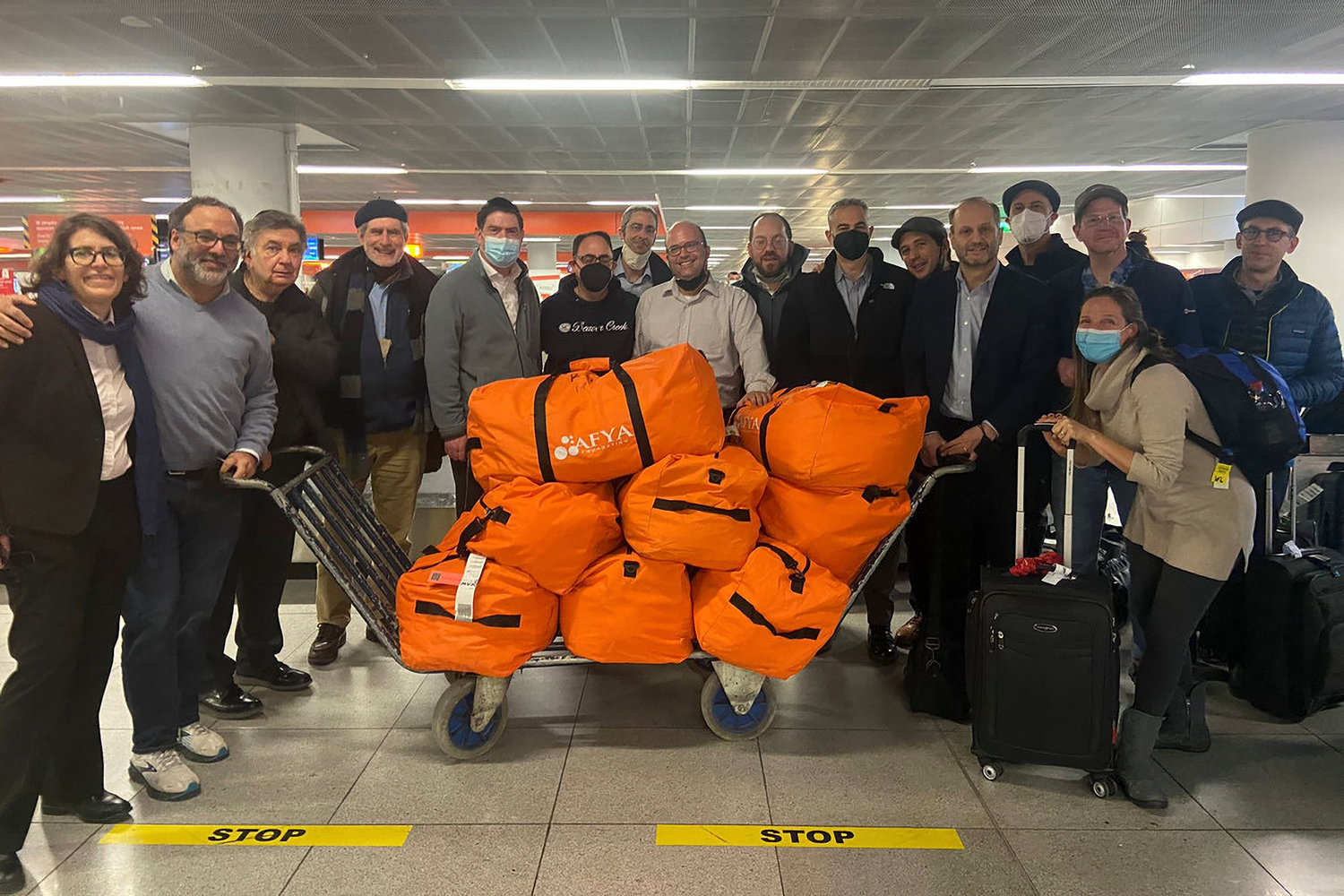 For three RiverWalk residents who are Holocaust survivors and a Riverdale rabbi, there are four words that sum up their reaction to Russia’s recent invasion of Ukraine: “v’nahafoch hu” — upside down — and “not again.”

In a note to Hebrew Institute of Riverdale congregants last week, Rabbi Steven Exler described what he saw in his trip to Poland earlier this month as part of a UJA-Federation of New York rabbinic mission.

“The overwhelming sense we heard from the people we met might be summed up in the two words that characterize the Purim story from Megillat Esther 9:1 — ‘v’nahafoch hu,’” he wrote. “Life in the past two and a half weeks — even for the Polish people — suddenly became something completely different than it had in prior times.”

Exler joined 17 other UJA rabbis from New York City, Long Island and Westchester County in a trip to Polish cities near the border of Ukraine to “assess the current and future needs” of the people there. The delegation brought duffel bags of medical supplies and humanitarian aid to four Polish cities the week of March 13, with plans to return home in time for the start of Purim on March 16.

The trip came together quite quickly, Exler said.

“We received an email invitation on March 8 that said to let them know in the next four or five hours if I could go. We had a Zoom call on Thursday night. On Friday, UJA dropped off a huge duffel bag to use to deliver supplies to the border.”

Exler summed up the trip as an experience he will never forget.

“It was extremely powerful,” the rabbi told The Riverdale Press.  “As deeply interwoven the war and the humanitarian crisis are, we didn’t see the bombs.

In a daily email to Hebrew Institute of Riverdale congregants, Exler described the trip to the four cities and the actions they took.  The humanitarian mission started in Warsaw and continued through March 15 in Przemsyl — a major transit hub for refugees —  Lublin and Srodborow.

“Today was a hard day,” Exler wrote on the morning of his last full day in Poland  “We knew it would be. We bore witness to great displacement, suffering and uncertainty, and we saw so much human heroism and love in action.”

The group brought 20 duffel bags of medical supplies from Yonkers-based Afya — an organization that ships medical supplies to crisis zones worldwide. The rabbis also brought such things as bandages, and items for baby care, feminine hygiene and toiletries. With the financial help of UJA, Afya rented a cargo plane and shipped more than $1 million worth of supplies to Ukraine.

On Monday, UJA-Federation of New York announced another $180,000 in grants to rent more cargo planes.

One part of the trip stuck out in Exler’s mind the most, according to his newsletter.  “On our way to the Medyka border crossing — the most stark of our visits — we were blessed to hear from two representatives of the Krakow Jewish community, the Krakow JCC director Jonathan Orenstein, and Krakow’s Rabbi Avi Baumol.”

Around the same day the rabbis were in Przemsyl on the last leg of their humanitarian trip, a group of about 25 Jewish residents much closer to home staged a one-hour protest across the street from the Russian Mission compound in North Riverdale.

“I am a Holocaust survivor,” Helen Weiss, 99, said. “My mother and sister were held in Auschwitz. Never again do I want to see what I lived through. We don’t want that to happen again.”

Weiss, of course, was referring to the genocide of some 6 million European Jews between 1941 and 1945 under Adolf Hitler.

“It’s time for the world to wake up and see what the Holocaust looked like,” said Leo Shliselberg, 95, a Holocaust survivor who lives in RiverWalk off Palisade Avenue. “They are bombing innocent children.”

Shliselberg’s father took his family to Israel — then known as Mandatory Palestine — in 1934 because it had become too dangerous for Jews.

For another Holocaust survivor at the protest, seeing the news of Russian troops killing Ukrainian residents in their homes, schools, hospitals and workplaces brings up sad memories.

“My husband spent four years in Auschwitz,” said Jacqueline Kimmelstiel, 94. “He lost his entire family. Now here it is again. This time it (should) not be able to happen again.”

The general consensus there was that Putin should stop the war in Ukraine while Biden should “wake up” before it’s too late.

“My message to Putin is, ‘Get lost. Drop dead,’” Shliselberg said. “To Biden, I say open your eyes. See how we can help. There’s the country of Israel” that can help, maybe even with a hospital.

The idea to protest came from the residents of both Hebrew Home and RiverWalk, both owned by RiverSpring Living.

“Some of our residents have lived through one Holocaust,” said Daniel Reingold, RiverSpring’s president and chief executive. “They are determined not to see another one ever again.”

Pointing to the Russian Mission, Reingold questioned why the diplomats and their families living in the compound are allowed to enjoy all the United States has to offer while their country is killing Ukrainians.