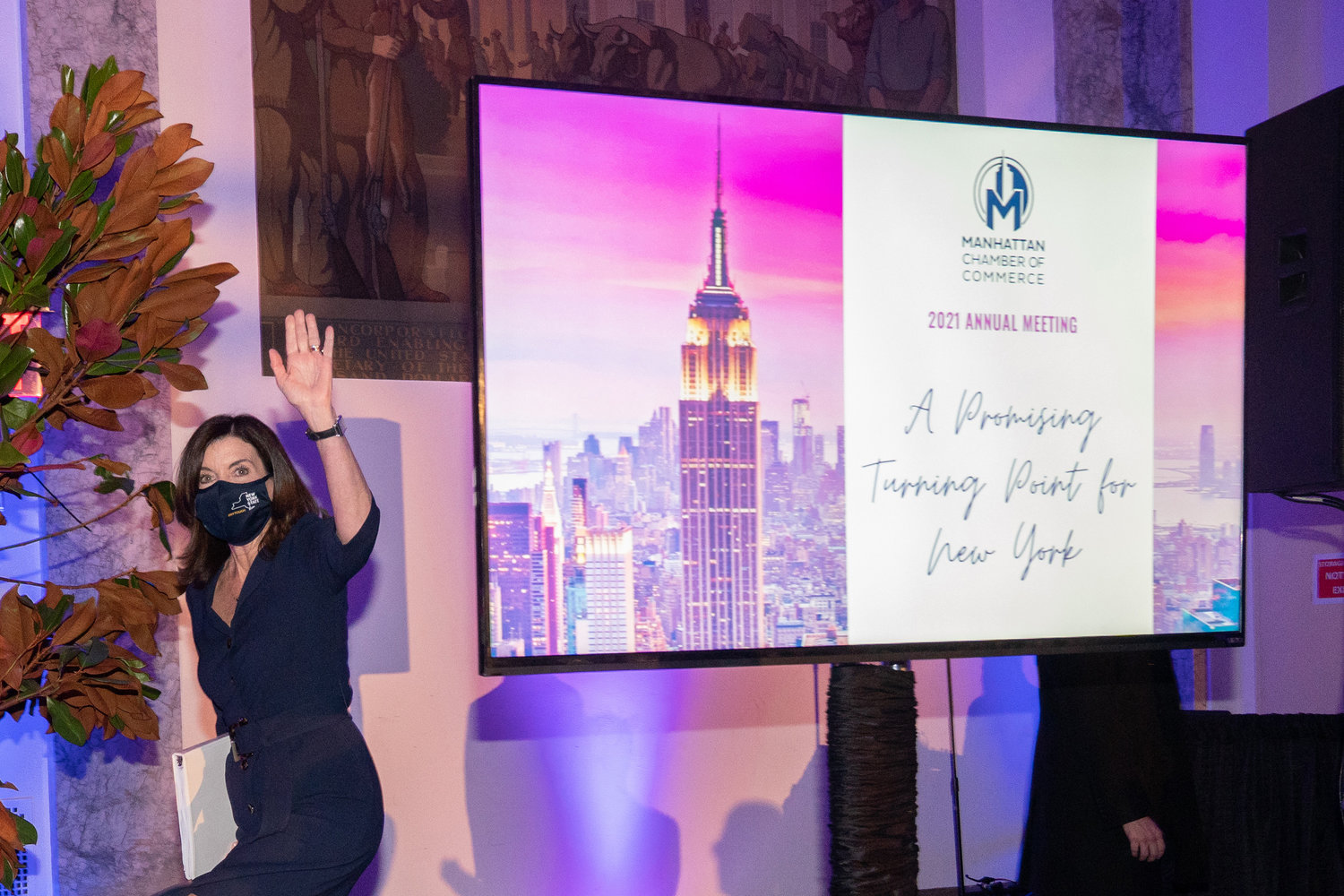 Gov. Kathy Hochul is now accepting applications for the federally funded Homeowners Assistance Fund. Hochul hopes these subsidies will allow low-income homeowners at risk of foreclosure to avoid losing their homes, especially since many of the moratoriums in place during the coronavirus pandemic are ending.
Courtesy of Office of Gov. Kathy Hochul
Getting some help

The New York State Homeowner Assistance Fund is designed to provide financial support for lower-income families delinquent in housing payments as a direct result of the coronavirus pandemic, according to the program’s website.

Also covered are homeowners living in a co-operative or condominium who are behind on monthly maintenance charges.

Finally, the program also covers manufactured homeowners who are behind on their chattel loans, retail installment contracts, or other types of home purchase loans, as well as monthly lot rent payments.

For more information on how to apply, visit NYHomeownerFund.org.

Signs that the world is starting to return to normal in the wake of the coronavirus pandemic is a good thing, right? Maybe when it comes to eating out or going to the movies.

But there is one aspect of pre-pandemic life that a growing number of homeowners wouldn’t mind seeing abated for just a little while longer: foreclosures.

With the pandemic-era foreclosure moratorium now a thing of the past, homeowners and property owners alike are scrambling, because banks are now free to start collecting on past-due mortgages.

The economy is slowly bouncing back, but many have yet to catch up on their financial obligations are threatened. Like Glash Popović, a landlord who feels city and state officials have forgotten him.

“Not all landlords are slumlords or real estate investors with no regard for their tenants,” Popović said. “Many of us are still trying to pay our mortgage (and) keep up with utility bills for water and occasionally heat. Some of us actually try to maintain our buildings’ upkeep, and that can be very costly. Especially when you also live (in the building) as well.”

Popović owns a four-family tenement building in Pelham Bay. He fears being forced to catch up on his mortgage might make it near impossible to also shell out for property taxes he’ll also owe this year. And it doesn’t help that the pandemic narrative has been largely unfavorable toward property owners, and the ordeals they’ve had to face.

“When the pandemic first started, all you heard were the reports about evictions,” Popović said. “Nobody ever mentioned the plight of the landlord, (especially) the small landlords and their struggles.”

Most of Popović’s tenants were always timely with rent. But that was before the pandemic. Since the initial 2020 shut down, many people lost their jobs or had their pay cut. That meant many of his tenants fell behind on rent payments, while others simply took advantage of the fact he couldn’t force them to pay.

“I had one tenant who paid their rent and then tried to retrieve it from my super when he found out there was an eviction moratorium,” Popović said. “Postponement is one thing, but intentionally not paying is something else.”

Some tenants filed for help from the Emergency Rental Assistance Program and got it. Others may have filed, but never heard back from the state.

But even with ERAP, those able to pay back a substantial amount of rent would suddenly fall behind again when the funds dried up. That left Popović unable to meet his own financial obligations — like his mortgage.

Popović now hopes he qualifies for aid from the Homeowners Assistance Fund so that he can avoid a default, and ultimately a foreclosure. But then again, the fund is designed more for families and not necessarily landlords — even if they live where they rent — so there’s a good chance Popović might not even qualify.

“New York Home Community Renewal — which is the state housing agency that is administering this program — is very worried that it’s a finite amount of funds, meaning there’s not enough to cover all the homeowners in need,” said Jacob Inwald, the foreclosure prevention director at Legal Services NYC. “They’ve structured the program in a way that they’re hoping will get the assistance out to those who need it most.

Those funds are capped at $50,000, Inwald added, and even then, it’s reserved for the poorer populations — a relatively small percentage of the homeowners his agency works with.

Yet, Inwald says he has clients who don’t meet those requirements, but are still low- or moderate-income homeowners.

Even with a limited reach, the program is still good for those it can help, said Amanda Brown, the benefits access program director at BronxWorks.

“They get to stay in their homes, and they don’t have to deal with the predatory loans and high interest rates,” she said. “I definitely think it will be beneficial to them.”

“We know that the economic pain of the pandemic has been felt disproportionately in rural communities, communities of color, and immigrant communities,” Hochul said, in a statement at the time. “This program is a demonstration of our commitment to placing the needs of New Yorkers-in-need at the heart of our work.”

Those who receive the loan have up to five years to pay it back with no interest. However, they are prevented from leaving their home as long as the loan is outstanding.

With the moratorium expired, Inward is worried how foreclosures and evictions could impact the efforts to help families.

“More money will be required to resolve individual homeowner arrears, because once a lender commences a foreclosure action against a mortgage borrower, they immediately tack on various fees such as property inspection fees, to say nothing of significant attorneys fees,” Inwald said. “With the expiration of the moratorium, it will cost the program more money to resolve individual homeowners' cases and will mean that fewer homeowners will be helped by it.”

“What am I going to do?” he asked. “Luckily, I do work in addition to owning the building. But whether it’ll be enough to keep me from eventually losing the building? We’ll see.”