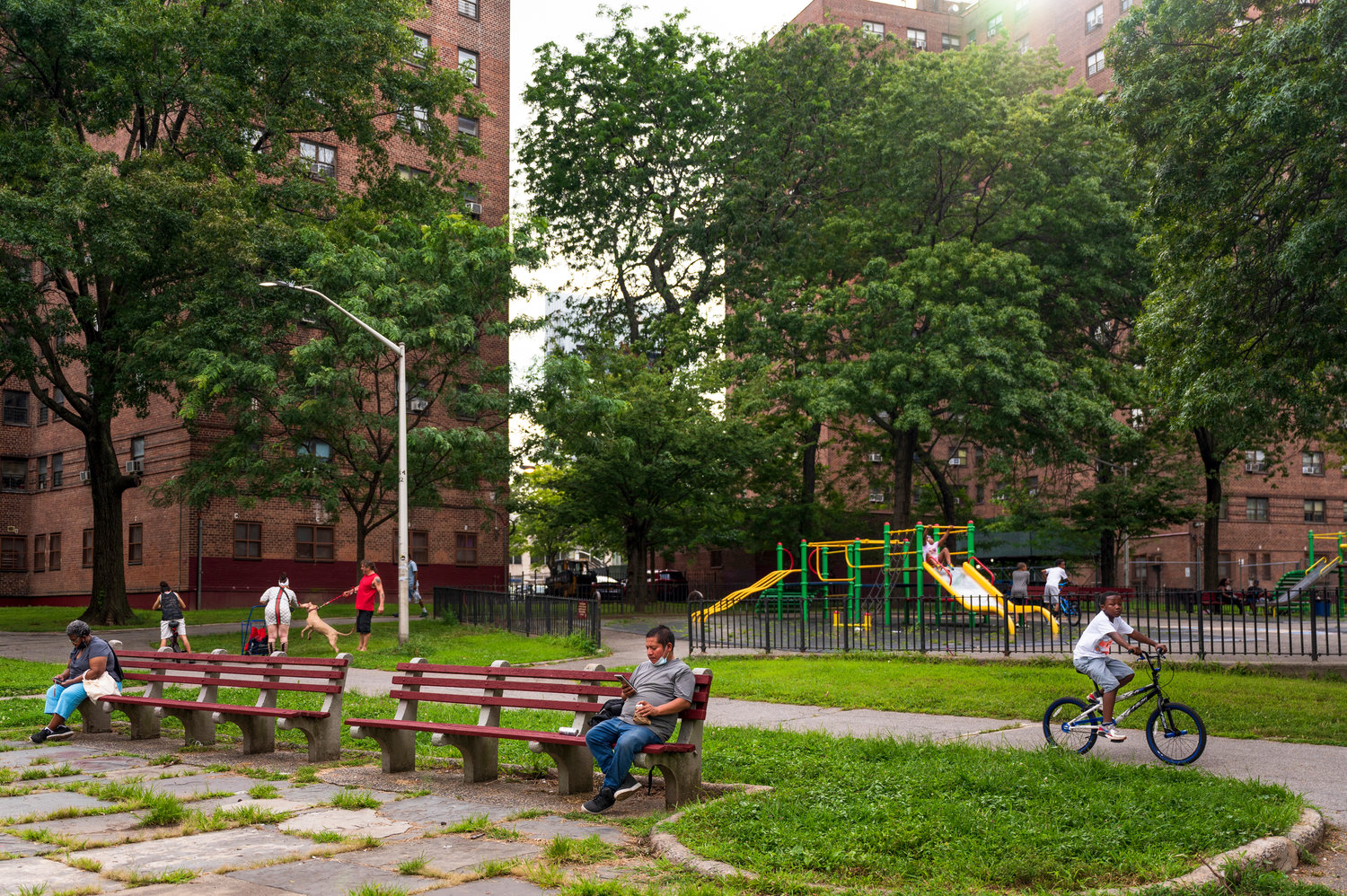 Hispanic tenants at Marble Hill Houses say they feel like they’re treated differently because of a language barrier between themselves and those who work for the New York City Housing Authority that manages the buildings. Community Board 8 last year released a Spanish language version of its 2017 housing guide, in hopes of breaking down some of the city’s more complex landlord-tenant laws.
HIRAM ALEJANDRO DURÁN 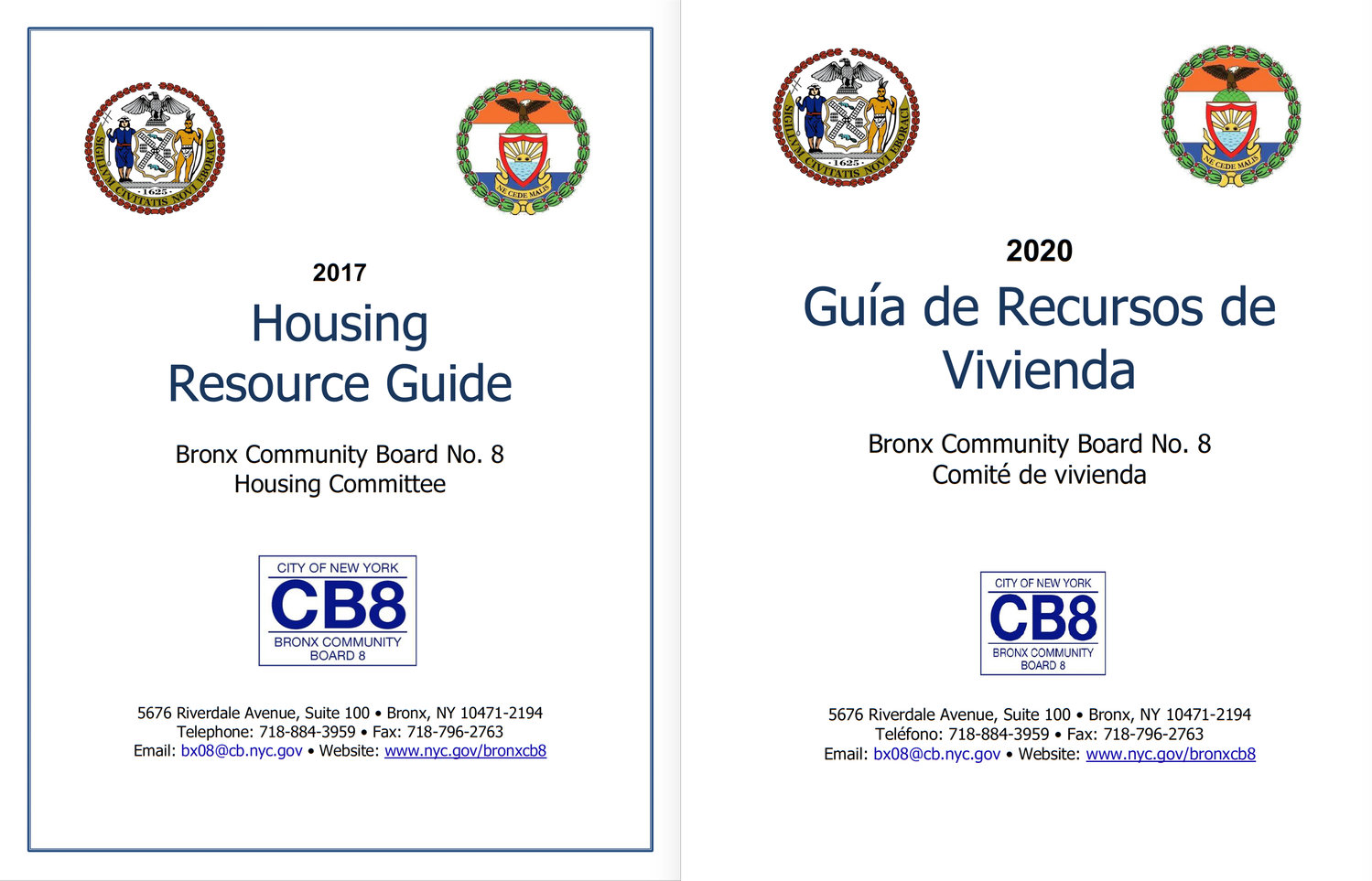 An illustration of both the English and Spanish housing resource guides created by Community Board 8. Three years after releasing the English version, the board released an edition in Spanish for those in the community who only speak or read that language.
Courtesy of City of New York
Previous Next

One of the problems we find ourselves dealing with is the lack (of) Spanish-speaking workers in our building’s management office.”
STEPHANIE RODRIGUEZ
Support journalism

For Spanish-speaking residents like Stephanie Rodriguez, housing resources can be very limited.

Living at Marble Hill Houses, Rodriguez often finds it difficult to get the help she and her family needs when it comes to some of the even most basic issues.

“One of the problems we find ourselves dealing with is the lack (of) Spanish-speaking workers in our building’s management office,” Rodriguez said. “It’s so difficult to get our issues dealt with because of the language barrier.”

Yet, even with a pandemic in full swing, Community Board 8 sought to remove many of those obstacles by publishing a new version of its popular housing resource manual from 2017 — just this time in Spanish.

The original guide was developed by a CB8 housing committee led at the time by Paul Ellis. It provided more than 25 pages of the ins and outs of living in New York City, from tenants rights, to laws governing rent-controlled apartments, and even how to find financing if a family is looking to buy.

It wasn’t long after the guide’s initial release CB8 planned a Spanish language sequel. That made sense, since more than one in every five people living within the board’s boundaries say they have limited English proficiency, according to the city’s planning department. Close to have the district spend 35 percent or more of their income on rent.

But there could be a small problem with CB8’s attempt at a Spanish translation. While the guide itself boasts its 2020 release date and an updated housing chair — Daris Jackson — it’s not clear how many of the city’s ever-changing resources and laws were updated. Based on housing committee meetings held during the creation of the Spanish guide, this latest edition was intended to be a direct translation of its 2017 English predecessor.

Yet, even outdated, some have found the guide to be far more helpful than no guide at all. In fact, looking to solve her family’s New York City Housing Authority woes, Rodriguez came across information that ultimately proved to be quite helpful.

“Some way, somehow, the only way we’d get anything fixed is through Tony Edwards,” she said, referring to the president of the Marble Hill Tenant Association. “I actually got his number searching for it online and his info came up. I just emailed him and reached out to him, and he answered me quickly.”

In fact, Rodriguez said Edwards helped her resolve one longstanding issue in her NYCHA apartment.

“We didn’t have a kitchen sink or a cabinet for over a whole year,” she said. “And then COVID happened, so then it got worse because now we really had to wait because you know they didn’t have staffing.”

“The bathroom ceiling has been breaking down,” she said. “We’ve been putting in (maintenance) tickets for years, and they’ve never fixed it.”

And where old problems still reside at the NYCHA complex, new ones continued to arise. Just recently, the Rodriguez family bathtub began to overflow with what appeared to be backed-up sewage water.

“We put in a ticket in that Friday night to have it looked at, and no one came until that Monday morning to check it out,” she said. “So, for three days we had to go shower at my sister’s house.”

On top of that, some power outlets also stopped working.

“So, in the meantime, in order to turn on the microwave in our house, we have to use an extension cord that’s about 10 feet long to plug it into a different power source to get it to work,” Rodriguez said. “So, it’s really bad.”

The entire ticket process happens to be the worst part of all of it, Rodriguez says. Her family has submitted more than 10 tickets to NYCHA over the years, with barely a quarter of them actually being resolved.

“You’re given a ticket for every problem, and it’s there. You just have to wait,” she said. “But even with that process, why does it take so long to get the help we need?”

Rodriguez isn’t being ignored, at least not by one of the three councilman who represent Marble Hill Houses. Fernando Cabrera sponsored a bill intended to allow the city’s 311 system handle all NYCHA complaints.

“I showed Tony the tickets that we’ve collected, which haven’t been answered,” Rodriguez said. “Even he was in disbelief at how many issues we still had standing. It took Tony to pressure the complex’s management for them to actually getting around to fixing anything.”

The community board’s housing guide manual not only helped her connect with Edwards, but also provided some contact numbers within NYCHA itself. She also found ways to reach out to a few elected representatives who Rodriguez hoped also could help.

Yet, while moving the NYCHA complaint system to 311 would certainly be a good start, Rodriguez says it’s only a start.

“It’s just me and my mom, and she only speaks Spanish,” Rodriguez said. “It’s another issue because they don’t have anyone in that office that speaks Spanish.”

Which doesn’t make sense, since the Spanish-speaking population is quite prevalent not just in Marble Hill, but throughout the city.

“I can’t go speak for her because I’m not the head of the household on the lease, so I can never show up on her behalf,” Rodriguez said. “If I go without her, they won’t even give me the time of day.”

When her mother did try to bring complaints to the management office, Rodriguez claims her mother was simply left waiting. And waiting.

“I can assure you that there are so many other people in that building — and in the entire complex — that feel like they don’t have anyone to represent them because they don’t speak their language,” Rodriguez said.

Where some express helplessness in their struggle to get the repairs needed for their home, Rodriguez feels optimistic about some of the efforts being put into place to address the needs of Spanish-speaking residents. And CB8’s Spanish-language housing guide certainly hasn’t hurt.

“Out of all of this, I will say that I’m hopeful that our community will continue to work on including us more on solutions,” Rodriguez said. “I think the willingness to address Hispanic people in something like (the housing guide) shows that.”