James Joseph McAlary's famly walks through Endor Garden near West 253rd Street and Fieldston Road after Saturday's dedication ceremony of a new sign commemorating victims of the Sept. 11, 2001, terror attacks created by students from Riverdale Country School. McAlary, a commodities broker with Carr Futures, was attending a meeting on the 92nd floor of World Trade Center Tower One when it was struck by a plane that morning.
MICHAEL HINMAN 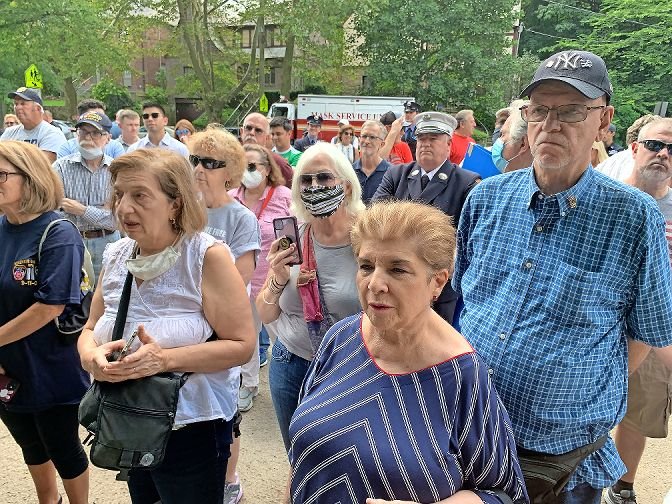 Hundreds gathered for the unveiling of the new 9/11 memorial sign at Endor Garden in Fieldston, in time for the 20th anniversary of the attack.
MICHAEL HINMAN 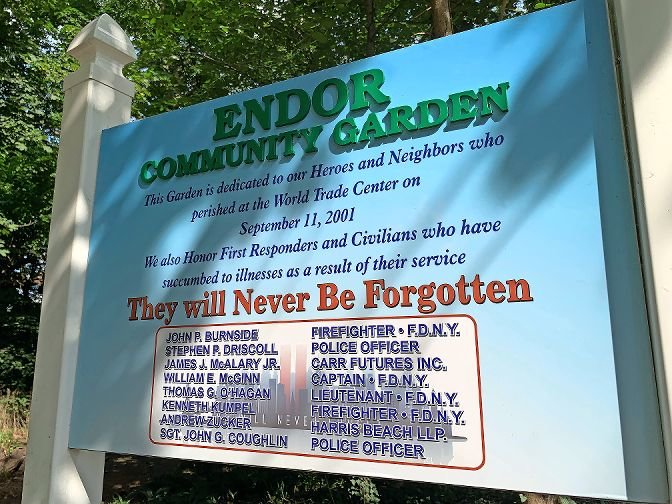 The Endor Garden commemorative sign honors victims of the Sept. 11, 2001, terror attacks, and was created by students and officials from neighboring Riverdale Country School. It replaces an original sign posted soon after the Sept. 11 attacks, that was vandalized and removed in 2017.
MICHAEL HINMAN
Previous Next
By MICHEL HINMAN

Vandals may have stolen a sign from the entrance of Fieldston’s Endor Garden four years ago, but they couldn’t claim the neighborhood’s spirit.

Led by Community Board 8 chair Laura Spalter and her husband Rob, rather large crowd shut down part of Fieldston Road near West 253rd Street  on Saturday afternoon, the neighborhood dedicated a new sign honoring the local victims of the Sept. 11, 2001 terror attacks — just in time for the tragic event’s 20th anniversary.

Hilary Kitasei created the garden along Fieldston Road soon after the Sept. 11 attacks. A short time later, contractor Jerry Fontan created and erected a wooden sign dedicating the garden to victims of the attack, which stood for nearly 15 years.

“Hilary named this ‘Endor,’ and she named it at the suggestion of her daughters,” Laura Spalter said. “I had believed it had something to do with Star Wars, but then today somebody passing by said they looked it up, and it has biblical roots.”

The new sign was created by students from the neighboring Riverdale Country School with help from administrator Milton Sipp and school maintenance staff member Andre Brown and Tom Healy.

Saturday’s ceremony included not only a number of elected officials and more than a hundred neighbors, but also dozens of firefighters and police officers, who brought trucks and vehicles to the event.

They were also joined by the family of James Joseph McAlary, who was on the 92nd floor of World Trade Center One when a plane hit it on the morning of Sept. 11, 2001. He was one of at least 20 people who died that day with local connections.

After the ceremony, Spalter told The Riverdale Press that while they expanded the names on the plaque from the original handful to the eight that are there now, she plans to add an additional segment to the sign adding more names — including some that were listed in the Sept. 9 commemorative edition of the paper.

“It was very important that we replace that memorial” after it was vandalized, Spalter told the crowd. “That’s what we’re doing today. But, in addition, I would like to say that since we sent out this invite, we have had several people reach out to us with names that were not on there. These are mainly firemen or police. So we’re going to move forward a little with more dedications to include everybody we can.”

Assemblyman Jeffrey Dinowitz said he started the day watching on television some of the thousands of names being read at the World Trade Center site.

A few days later, the lawmaker said he was traveling through the city when the reality of that tragic event finally hit home for him.

“What struck me while we were driving down the West Side Highway, and I saw it for the first time — or what I didn’t see — you didn’t see the twin towers anymore,” Dinowitz said. “And it was shocking.”

Money for the new sign was raised by Riverdale Country’s middle school student council through its annual dance-a-thon.

“The kids were into it, too,” Sipp told The Press before the ceremony. “They were energized. They were fired up about it. They really wanted to see this happen. There was like a level of engagement that was pretty cool to see.”

Rob Spalter says his hope is to permanent install a flagpole at the site next. But that would require permission from DOT.