School security — how much is too much? 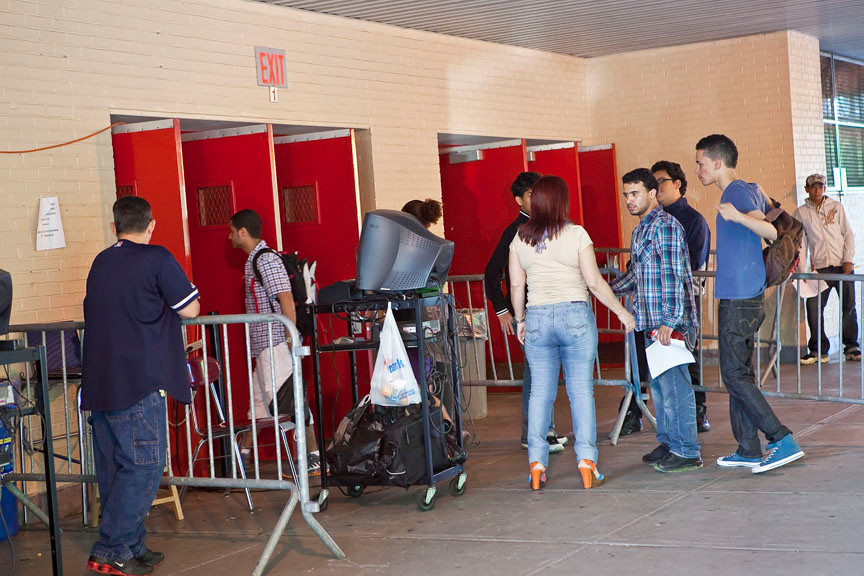 Students go through metal detectors at the John F. Kennedy Campus. Arthur Johnson, a rising junior at Bronx Engineering and Technology Academy. ‘If anything [security officers] help me a lot,’ he says. ‘I came out of school one day and a couple of guys jumped me and I told the security and they got suspended and put on probation. They connect with the students.’
MARISOL DÍAZ/THE RIVERDALE PRESS 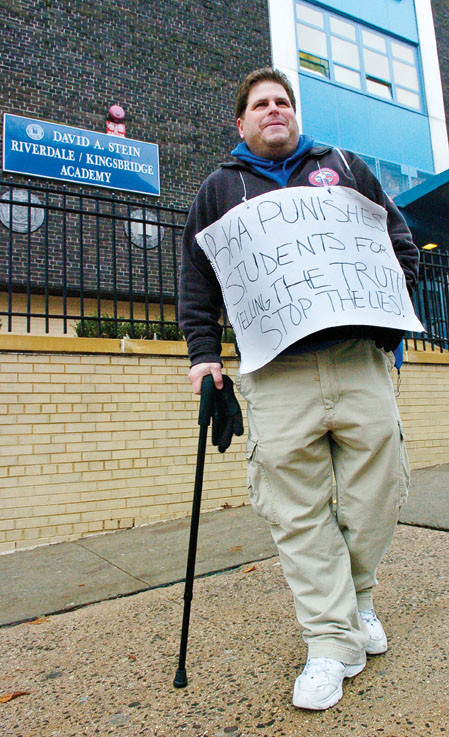 In 2007, Steven Yagoda, a parent of a Riverdale/Kingsbridge Academy student at the time, picketed outside the school to protest the suspension of his seventh-grade son, Abraham.
MARISOL DÍAZ/THE RIVERDALE PRESS 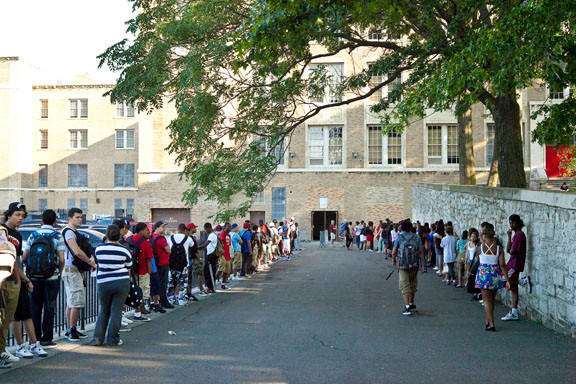 Zaheen Khan will be senior this fall at DeWitt Clinton High School where students get on long lines to go through security. ‘It’s just sad,’ he said, ‘Ten years ago this school was safe, it was one of the best schools. The mentality is different. If I went to a regular school, I wouldn’t know all this. I know how to act like a terrorist. I could teach you a thousand ways to sneak in a blade.’
MARISOL DÍAZ/THE RIVERDALE PRESS 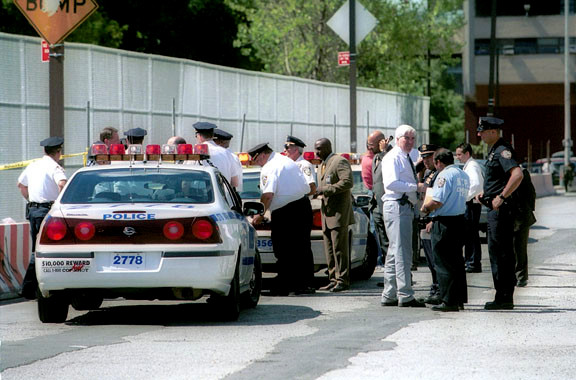 Police officers and school officials survey the site where a JFK student was stabbed to death by a classmate on the way to summer school in 2002. It wasn’t until four years after the incident that Kennedy was put on a list of Impact Schools and given special scrutiny.
Riverdale Press file photo by Mekea Hurwitz Fishlin 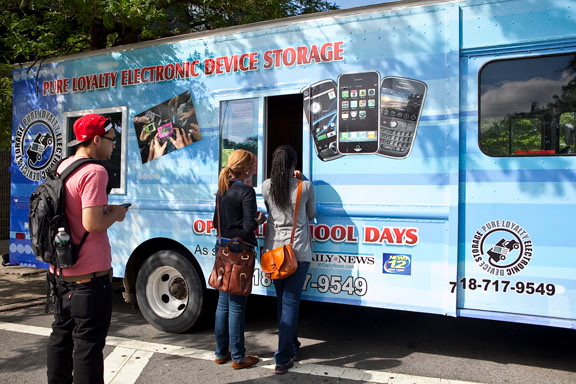 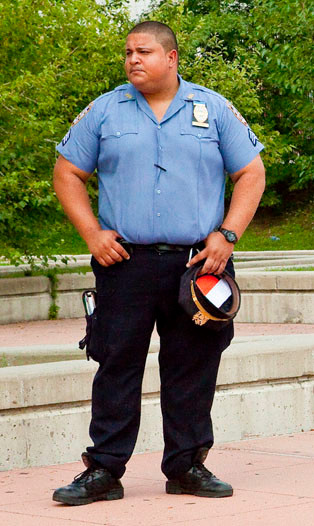 School security — how much is too much?
MARISOL DÍAZ/THE RIVERDALE PRESS
Previous Next
By Sarina Trangle

Each morning, Samantha Evans, wrangles with hundreds of students pushing to get to the counter of Kingsbridge Ave. Inc. deli and grocery so she can store her LG Optimus phone there for $1 a day.

At about 8:40 a.m., 27 minutes before the Bronx Theatre High School bell rings, she joins the line behind the metal detectors guarding the first-floor entrance to the John F. Kennedy Campus, where her school is located.

The grace period prevents her from being tardy if stormy weather extends the pauses between pings the computers emit each time students swipe their IDs. At the front of the line, Samantha slides her bag across the conveyer belt, removes the belt, chain necklace and hoop earring she typically wears, and walks through a scanning system designed to catch weapons and electronics.

During afternoon dismissal, Samantha says security personnel shoo her and her friends away from the campus, leaving her mystified about why benches were installed near the parking lot.

“It makes your school look bad because it’s like ‘Oh, they must have delinquents over there at that school.’ I’m not a delinquent. I’m ashamed to say that I’m in Kennedy Campus. I say I go to Bronx Theatre High School. They say, ‘Where’s that at?’ And I’ll be like, ‘Riverdale,’” Samantha said, even though the school is located in nearby Kingsbridge.

Students at the Kennedy Campus — which cycled through the Impact Schools program designed to clean up campuses with high crime rates –– face more stringent security than their peers at other schools. But, throughout Riverdale, Kingsbridge and Marble Hill, students can’t escape increased policing and zero-tolerance discipline policies.

School crime rates have dropped nationwide over the past decade. Yet security cameras, student ID cards and armed officers are becoming ingrained in campus life. Researchers say the physical steps to curb misconduct help assuage general distress about the state of education.